Boat Outings to Book This Summer

Whether you want a workout, a cruise or a little bit of both, you've got options for getting out on the water. 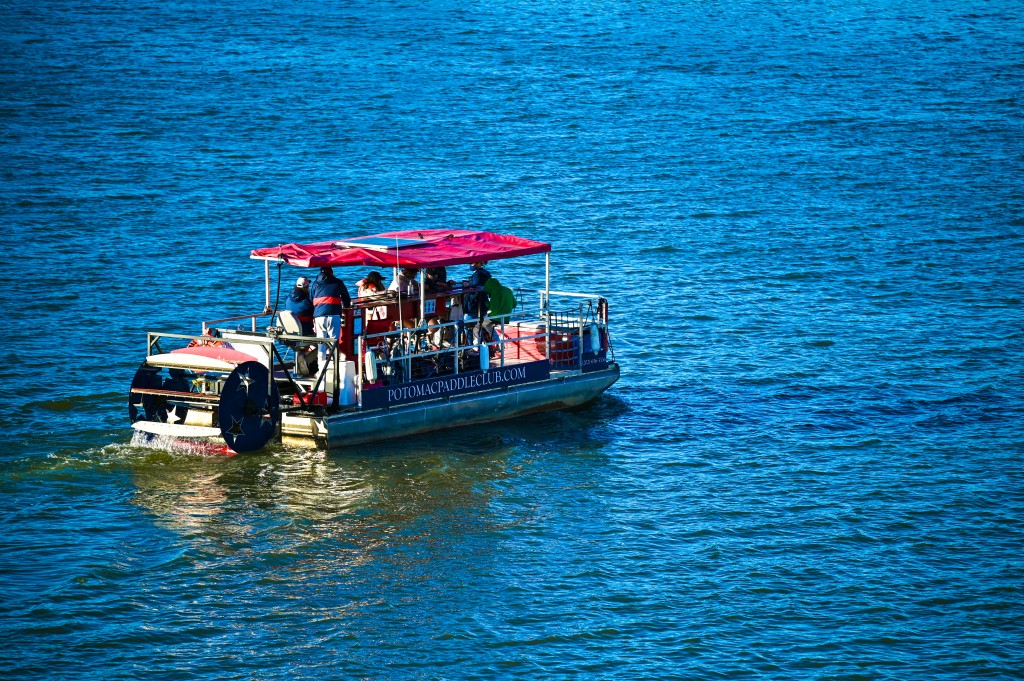 Well, we’ll say this for the pandemic: It did put the “great” back into “great outdoors” as many of us sought the open air. Boat operators can certainly attest to an increased interest in getting outside. Seven-year-old Penguin Paddling in Occoquan, for one, saw a 650% increase in business between 2019 and 2020, prompting owner Danny Barker to add about 50 kayaks to his fleet of single and tandem boats and paddleboards. Now he can send about 300 people out on the water at any given time.

With demand expected to be just as high this summer, area boathouses, tour companies and outfitters are expanding their hours and offerings, with more guided tours, specialty cruises and summer camps designed to give landlubbers their sea legs. Here’s what’s on deck at six local boating operations. Check individual websites for pricing, rules and hours. 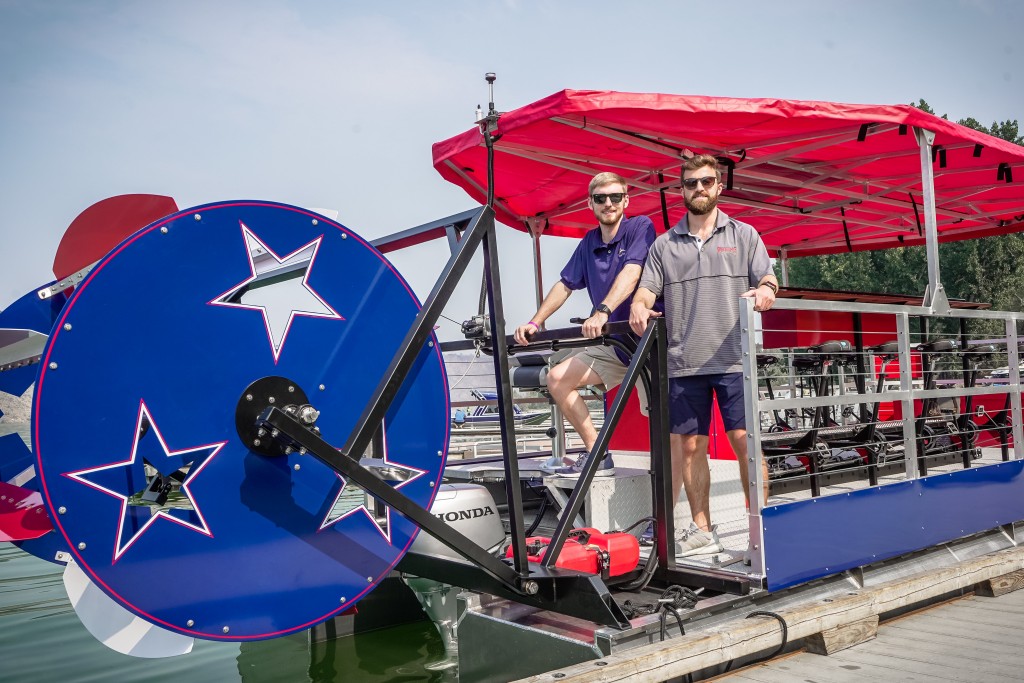 Party while working out (or work out while partying) on one of two eco-friendly Cycleboats from Potomac Paddle Club. The pontoon-style boats allow up to 10 passengers to pedal, stationary bike-style, up or down the Potomac, though each vessel can carry 16 people total during the 90-minute roundtrip ride out of Georgetown’s Washington Harbour. 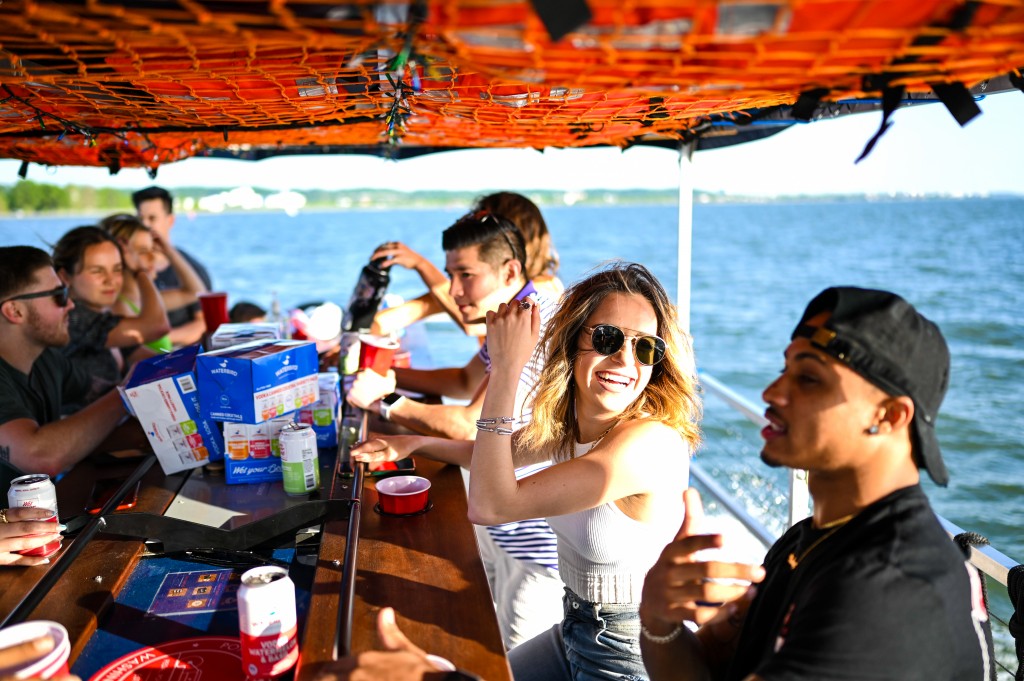 Also new is a 2.5-hour tour from Alexandria to National Harbor, available seven Fridays this summer.

Business is booming, according to “the Jacks,” whose boats are also equipped with motors for those who prefer to sit back and relax. “I think a lot of people who were just looking to get outside and do something discovered [us] last year,” Maher says, “and then that momentum has carried through. This year, it’s just exploded.” 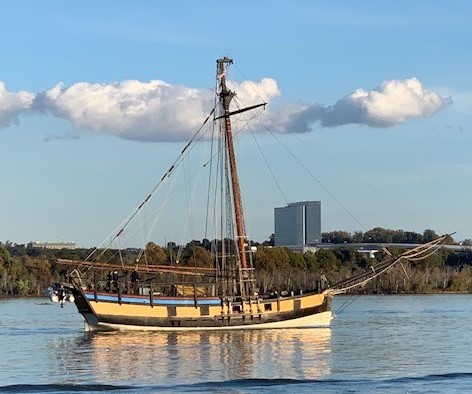 A towering presence in Old Town Alexandria is Providence, a replica of the first ship authorized for use by the Continental Navy, with a mast topping out at 93.5 feet when fully extended. The 18th-century sloop is available for 45-minute tours led by Capt. John Paul Jones (a docent in costume), who commanded the real Providence.  The guide explains the finer points of maritime navigation and takes guests into the captain’s cabin and hold for a look at what life was like for sailors during the Revolutionary War.

“John Paul Jones is in 1776. People try and trick him all the time. Doesn’t happen,” says Clair Sassin, executive director of the Tall Ship Providence Foundation, noting the guide’s unfailing ability to remain in character. “You really do go back in time.” 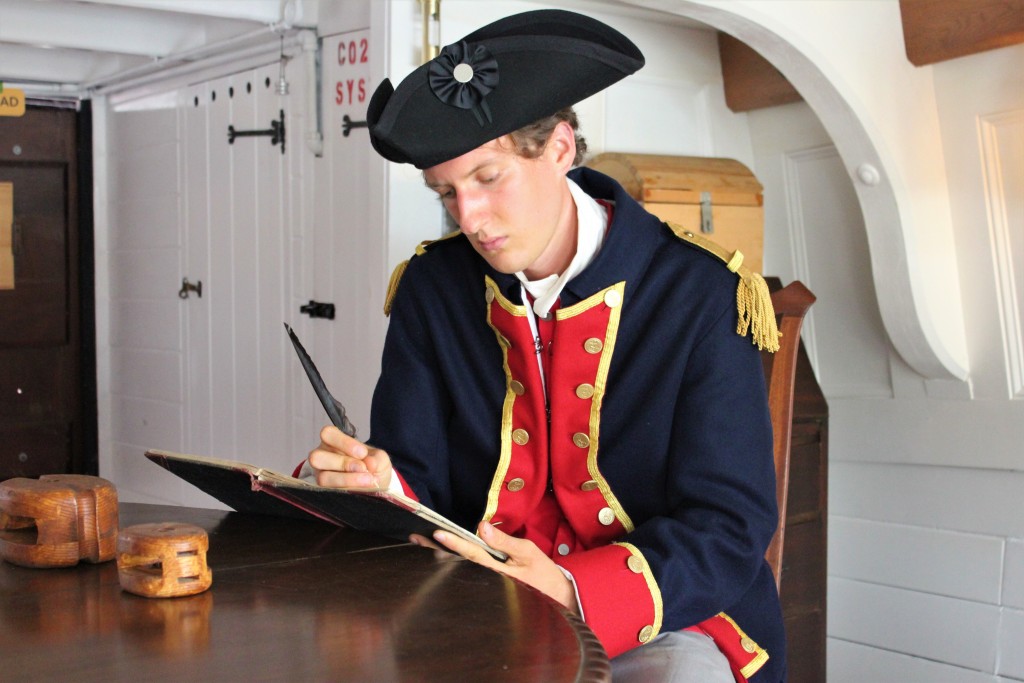 Beginning May 29, the ship will be open for two-hour sails, twice a day, Wednesday through Sunday. A public cruise in the afternoon includes a historic interpreter who can offer fun facts about the ship, along with nonalcoholic beverages and salty snacks. Sunset cruises are also available, as are craft beer, wine, rum and bourbon tasting cruises. On all rides, passengers help set the sails. 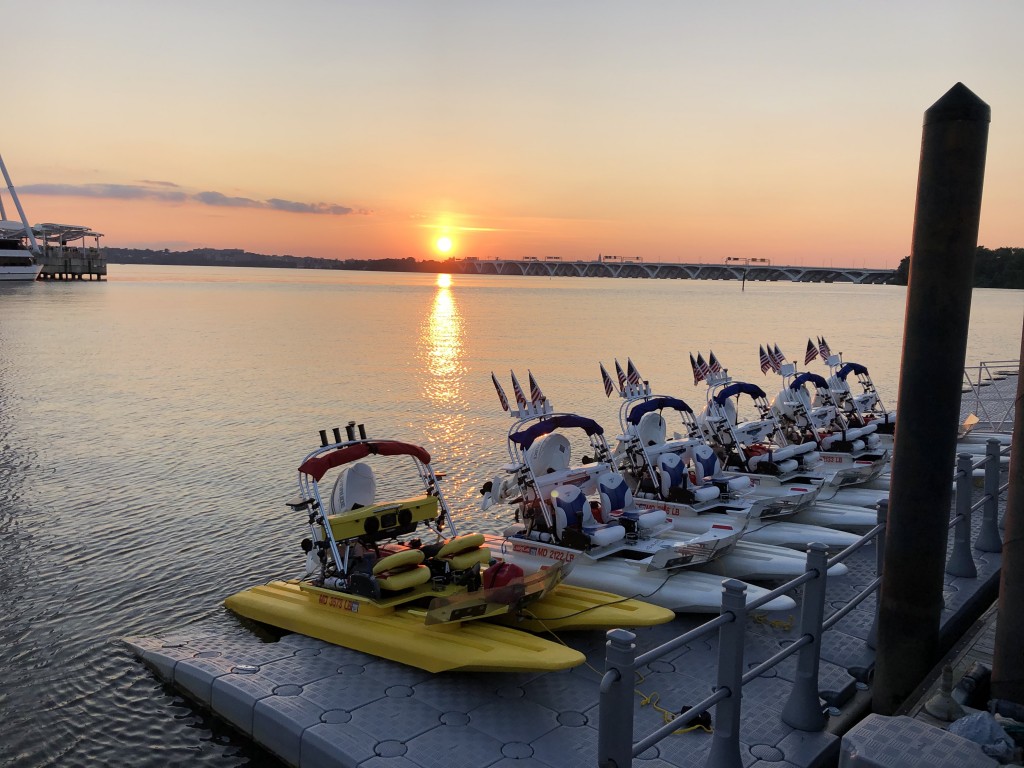 “It’s a guided tour, and [participants] get to be in their own boats so they’re completely Covid-safe,” Fries says. “We explain where they’re at and what they’re doing over our walkie-talkies.” (Watch this video for more info.) Passengers must be at least 5 years old; boat drivers must be 18 or older with a valid driver’s license. 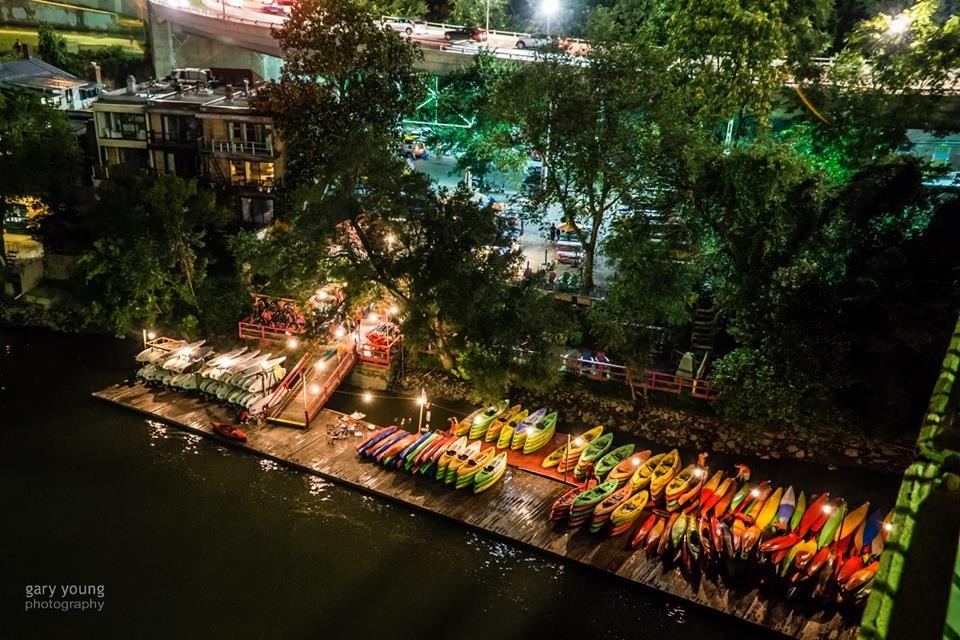 Prefer a sporty outing that flexes those biceps, triceps and deltoids? Six of this D.C. operator’s seven boathouses are now open, with watercraft such as kayaks, canoes, standup paddleboards, pedalboats, rowboats and (at National Harbor) hydro bikes.

Some of the boathouses operated by Boating in DC have introduced new programs for getting on the water this season. The Key Bridge Boathouse has created a summer camp for children ages 8 to 13, with a camper to counselor ratio of 8:1. From 10 a.m. to 4 p.m., Monday through Thursday, campers spend about 90% of their time on the water while breaking for lunch, team-building activities, and arts and crafts. 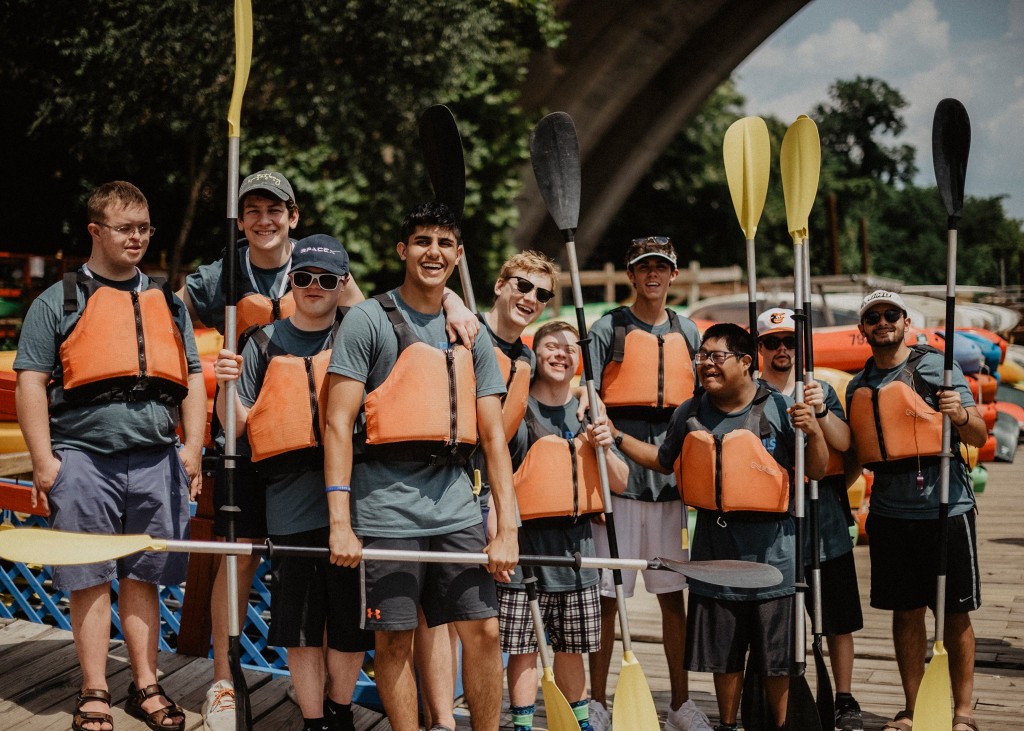 “They’re basically an initiation to boating for kids that have never done it before,” says Natalie McCarthy, social media and content marketing specialist for Guest Services, which runs the locations. “We teach them safe boating, the proper etiquette on the water as well as how to canoe or kayak.”

Also new is Dinners at Dusk for the 21 and older crowd. The monthly event (reservations available) at the Key Bridge Boathouse includes an hourlong paddle on the Potomac, followed by dinner and live local music.