These dark places offer ample views of the night sky, away from the urban glare. 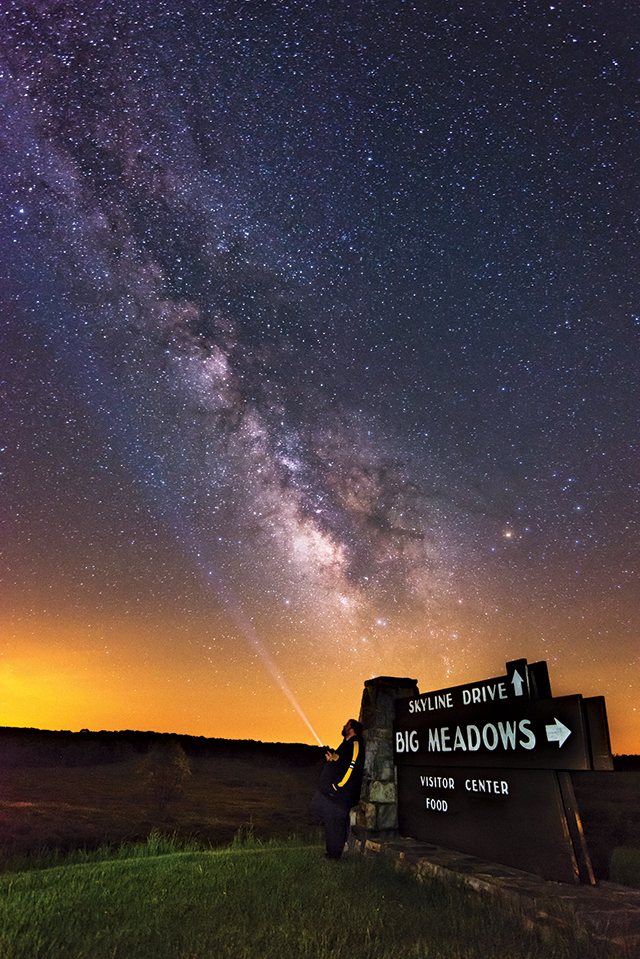 Views of the Milky Way at Big Meadows in Shenandoah National Park. Photo by John Messner

The rhythmic trills of the evening cicadas had faded, and I’d just fallen into a deep sleep when I heard the unmistakable sound of a tent flap being unzipped. In the darkness, my teenage son crunched away from our campsite, presumably to answer the call of nature. But when he didn’t come back right away, I sat up and called his name.

“Mom, come out here,” he whispered excitedly. “The stars are amazing.”

I stepped out of my tent, let my eyes adjust and followed the sound of his voice to a clearing near our campsite. Together we looked up at a black sky full of thousands of twinkling stars, a glittering sugar bowl dumping out over our heads. “That’s the Milky Way,” my son pointed out. Together we spotted the Big Dipper, the North Star, the bright orange star Arcturus. In the quiet Virginia woods, far from the bright urban night we’re used to, the stars held us, spellbound.

It’s an experience that’s becoming harder to find, especially on the East Coast. According to a study funded by the international Loss of the Night Network, between 2012 and 2016 the Earth grew brighter at a rate of about 2% per year due to artificial light pollution, robbing us of the beauty and primeval sense of wonder that dark skies provide. But several spots within a few hours’ drive of the D.C. area still boast incredible natural darkness. And as the nights grow colder and longer, it’s worth remembering that stargazing in the fall and winter is often preferable because the air is less humid and hazy.

“With the longer nights, you certainly have more opportunity on the margins of the day to just casually get out with a pair of binoculars, sweep across the sky, and see what’s up,” says Chris Kagy, president of the Northern Virginia Astronomy Club (NOVAC). “Just be sure to dress warmer than you think you need to.”

Fall and winter skies promise some worthy spectacles, Kagy says, including the Geminid meteor shower in mid-December; the Andromeda Galaxy (which resembles an elliptical fuzz ball when viewed through binoculars); the Pleiades star cluster; the Orion Nebula in the “belt” of the constellation Orion; and of course, the Milky Way.

Download monthly sky maps at skymaps.com; astronomy apps such as SkySafari or Star Walk are also useful. As with all things these days, check location websites for possible closures and safety protocols before you road-trip. 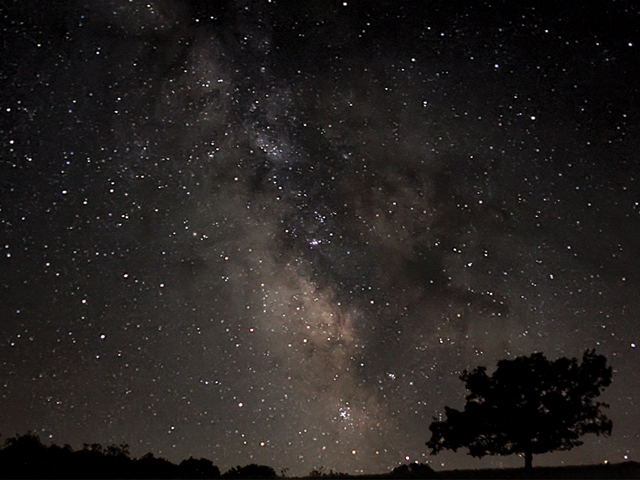 The night sky at Big Meadows. Photo by Larry Brown

Catching a sunrise or sunset is a popular pastime at Shenandoah National Park, where many mountain overlooks offer an unfettered eastern or western view. But, as the tagline of a popular series of Milky Way posters by artist and astronomer Tyler Nordgren attests, “Half the park is after dark.” Although park overlooks are great stargazing locations, the widest night-sky view at Shenandoah can be found at Big Meadows, a great grassy field located at milepost 51, about the halfway point of the 100-mile Skyline Drive. In August, Shenandoah normally hosts an annual Night Sky Festival at Big Meadows, with ranger talks, telescopes set up for public viewing and other activities. (This year’s event was canceled, but organizers intend to resurrect it in 2021.) Additional astronomy events happen there throughout the year, some of which, as of press time, were still a go for late 2020 and 2021. With camping and lodging nearby, Big Meadows is a great place to bring your own binoculars or telescope and settle in for some nighttime glitter. 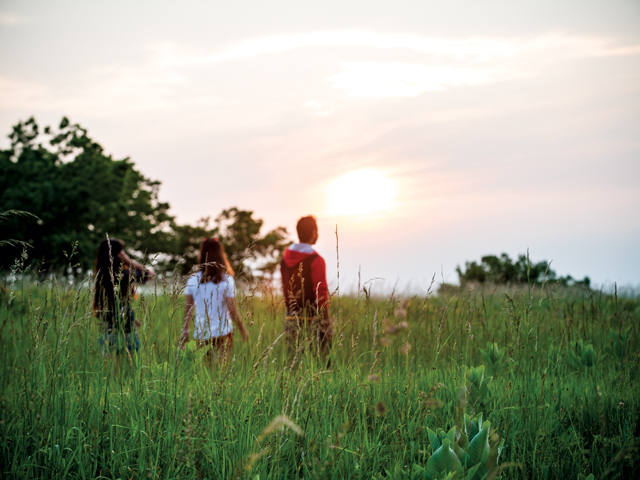 Big Meadows is most easily accessed by heading south from the park’s Thornton Gap entrance, on U.S. 211 near Sperryville and Luray. Big Meadows has a cozy lodge and campground (closed Nov. 6 – April 30), as well as a camp store and small restaurant offering supplies and takeout fare, and is near several popular scenic trails. 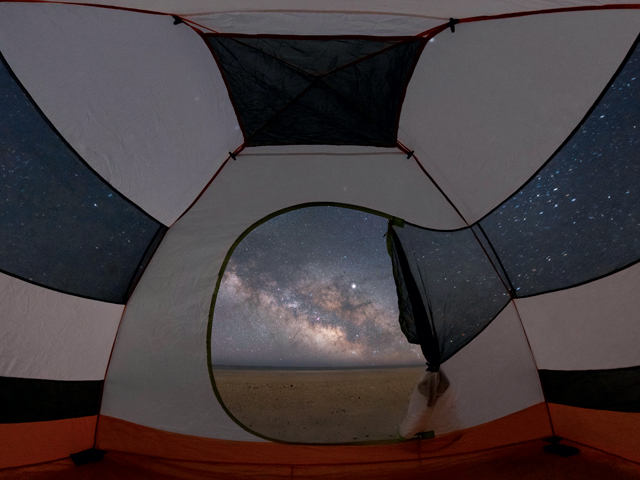 Miles of Atlantic beachfront offer plenty of daytime fun, but nights on Assateague Island National Seashore—and the adjacent Assateague State Park—are often dazzling spectacles in their own right. The national seashore straddles the Maryland-Virginia line along the Eastern Shore, although only the Maryland district is open 24 hours. (On the Virginia side, hours vary by season.) Camping is allowed only in designated areas. However, as long as you don’t fall asleep (which the National Park Service views as illegal camping), you can plant a towel on the sand at night and observe the arc of the Milky Way or the fireworks of a meteor shower, all set to the soundtrack of crashing surf. Visitors to the Virginia district of Assateague can also time their visit to coincide with one of the regular astronomy nights hosted by the NASA Wallops Flight Facility, located near the adjacent resort town of Chincoteague, once it’s deemed safe to hold them again.

Assateague Island National Seashore can be accessed from either the Maryland or the Virginia side; hours and accommodations vary between districts. Find lodging and dining options in Chincoteague; Ocean City, Maryland; and other nearby areas. 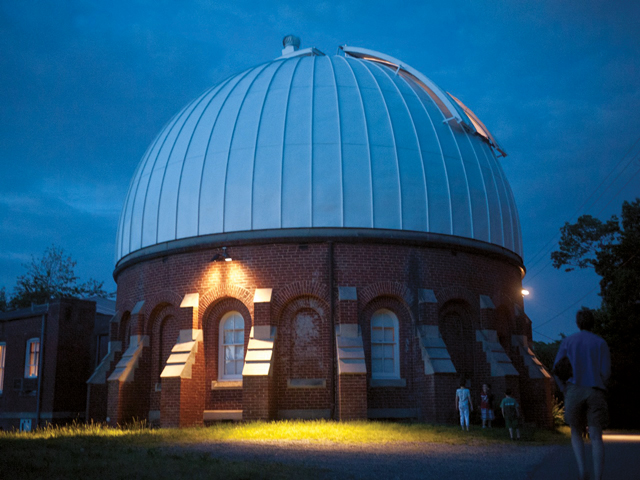 On the vaunted campus of the University of Virginia sits a not-so-hidden gem—a more than century-old telescope that is the centerpiece of the McCormick Observatory. Charlottesville is a sizable enough city that light pollution often interferes with naked-eye stargazing, but in non-pandemic times, the McCormick Observatory offers twice-monthly public nights that invite visitors to peek through its 26-inch telescope. (The measurement refers to the diameter of the lens; at one time, the McCormick telescope was one of the largest in the world.) These events draw astronomy faculty and others who bring smaller telescopes for shared use, too, with planets, galaxies and other celestial objects among the usual fare. Until the observatory reopens for events, the university astronomy program is hosting a range of online astronomy events, posted on Facebook.

The observatory is near many architecturally and historically significant buildings on the UVA campus in Charlottesville, as well as a plethora of dining and lodging options off campus. Charlottesville is also a short drive to dark-sky locales in Shenandoah National Park and along the Blue Ridge Parkway. 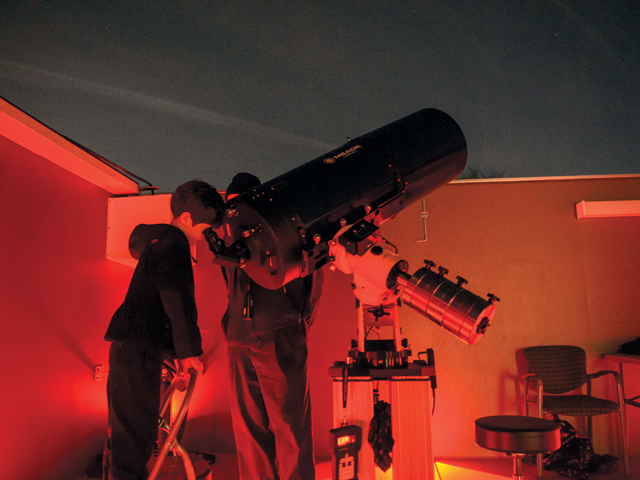 The Observatory Park at Turner Farm

Less than 20 miles from Arlington is one of the darkest spots in the D.C. metro area—Turner Farm in Great Falls. The site began as a dairy farm and was later converted for use as a Nike missile site and as part of the Defense Mapping Agency, before being turned over to the Fairfax County Park Authority in the 1990s. Today, the park features equestrian facilities, a playground and picnic areas, but the Observatory Park at Turner Farm is the main evening attraction. During special public nights sponsored by the Analemma Society, astronomy buffs are invited to the observatory to catch a view through its telescopes or to set up their own scopes in the surrounding field. The society will likely reinstate these events post-pandemic. 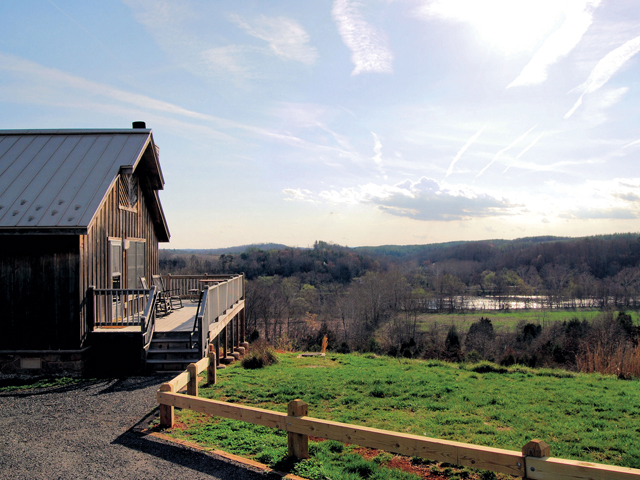 State parks are often terrific places for observing stars because they tend to have open areas such as fields or lakes, as well as lodging and other visitor amenities. James River State Park, in Gladstone, Virginia, is particularly special because it is a designated International Dark Sky Park. (Virginia’s Staunton River State Park, closer to the North Carolina border, is also so designated; they are the only two state parks in Virginia among the 20 or so U.S. state parks on the list.) The International Dark-Sky Association bestows this designation as a way to reward and encourage places that have protected their dark skies from light pollution. At James River, rolling grasslands and three miles of river frontage provide ample opportunities for stargazing.Amateur astronomy clubs often use the park for events (when it’s safe to do so).

James River State Park is located about 50 miles southwest of Charlottesville. Cabins and lodges are available Memorial Day to Labor Day, and primitive tent camping is offered year-round. Other activities include hiking, fishing, canoeing and kayaking. Note that most state parks require a reservation for overnight lodging to stay in the park after sunset. 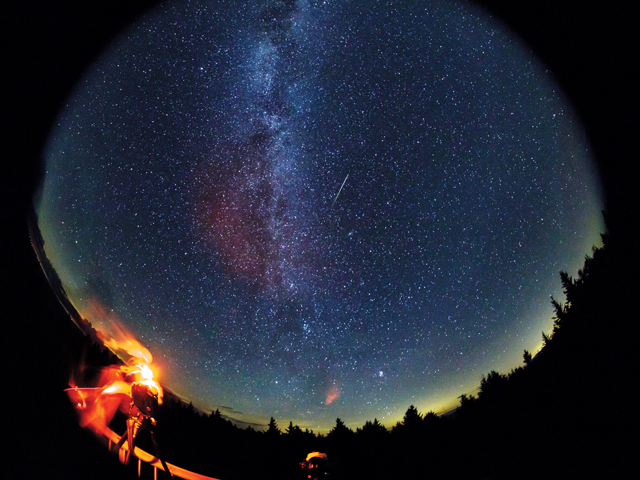 A Perseid meteor shower as seen from Spruce Knob. Photo by Bill Ingalls

If there is an East Coast mecca for stargazers, Spruce Knob Mountain might be that place. It was here that NOVAC’s Chris Kagy reports seeing the darkest skies he’s ever witnessed in this region. (“The Milky Way cast a shadow,” he marvels.) At 4,863 feet, Spruce Knob is the highest point in West Virginia, and the highest peak in the Allegheny Mountains. The remote location, high elevation and lack of visual obstacles make for reliably dark views, and it’s possible (often even easy) to see celestial features with the naked eye—such as spiral galaxies and globular clusters—that are impossible to see unaided closer to home. Spruce Knob is the site of the Almost Heaven Star Party, an annual multi-day event sponsored by NOVAC that features guided night sky “tours,” daytime lectures on astrophotography and other cosmic attractions. Spruce Knob is the centerpiece of the Spruce Knob-Seneca Rocks National Recreation Area, itself part of Monongahela National Forest, about 2.5 hours west of Front Royal. Ample lodging and dining options can be found nearby. Yokum’s in Seneca Rocks, West Virginia, for one, has lodging options, a general store and deli.

A writer based in Aurora Highlands, Kim O’Connell has spent several trips chasing comets, eclipses, meteors and other celestial happenings.