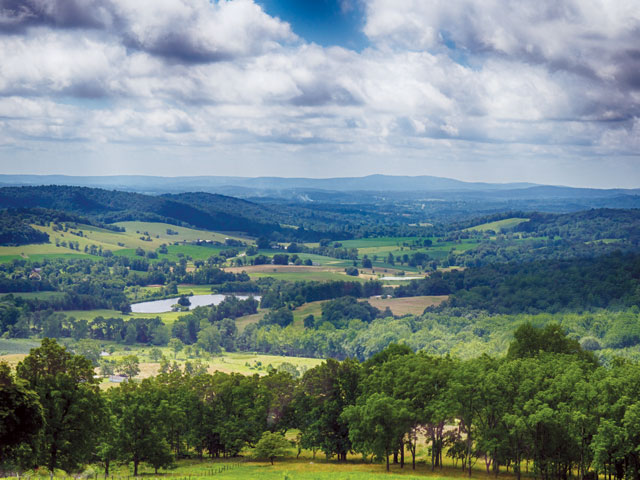 Between Virginia’s eastern coastal plain and its Appalachian spine lies its rolling heart—the Piedmont. Located near the town of Paris, off U.S. 17, Sky Meadows State Park celebrates these Virginia foothills in all their glory, occupying a 1,860-acre tract donated to the state by philanthropist Paul Mellon. Nestled into an undulating valley east of the Blue Ridge, the park combines meadows, forest, streams and tended fields, as well as a historic district with 18th- and 19th-century farm buildings that interpret colonial and antebellum life. 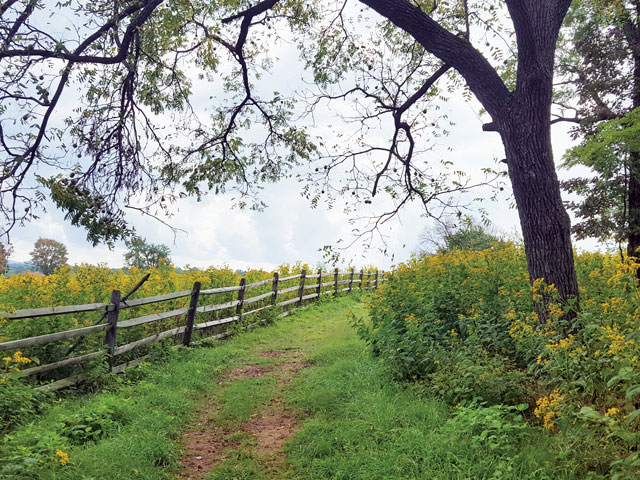 Hikers at Sky Meadows have their choice of trails of varying difficulty and length, for a total of 22 miles. One of the most scenic circuits, however, is a 5.2-mile combination of the park’s Piedmont Overlook and North Ridge trails, as well as a short section of the Appalachian Trail, that provides stunning panoramic views of the surrounding hills and farmlands. Although sections of the circuit are forested, the hike is unusual in that it traverses open fields with unimpeded vistas. Forget Montana—this is big sky country in Virginia.

Because of its dark, relatively unpolluted nights, Sky Meadows is popular with stargazers, too. You could join one of the park’s regular astronomy nights, when astronomers bring telescopes and point out constellations and other celestial features—although after a day of hiking you might just want to book a campsite, kick off your shoes and look up. 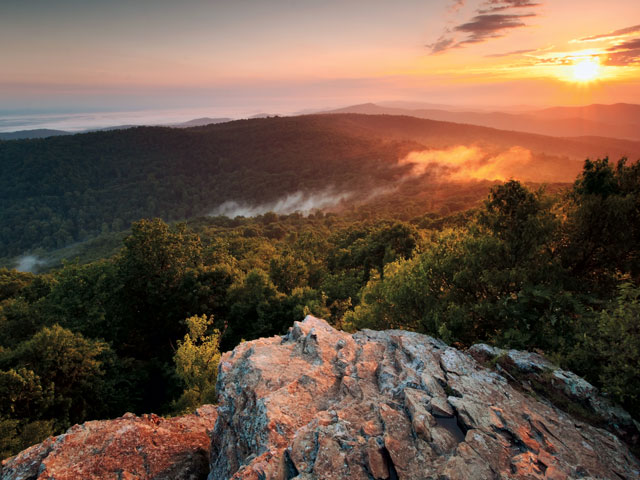 The view from Compton Peak. Photo by Vladimir Grablev

With more than 500 miles of trails, Shenandoah National Park offers a bevy of options that range from short nature walks to the rugged Appalachian Trail (AT), which traverses the entire 100-mile length of the park. Broad vistas, rushing waterfalls and historic sites can all be seen from the park’s trails, most of which are accessed from overlooks and parking areas along Skyline Drive.

The moderately difficult, 2.4-mile Compton Peak trail, for one, offers a quintessential Shenandoah experience in relative proximity to I-66 and the amenities in Front Royal. The trailhead sits across Skyline Drive from the Compton Gap parking area at mile 10.4 (mileposts begin at zero at the park’s northern Front Royal entrance). Almost immediately, you’ll head uphill on a portion of the AT past large intact and crumbling boulders. At the junction with the Compton Peak trail, you can go right toward a magnificent view of the surrounding Appalachians, or left to see a volcanic columnar jointing feature, a series of connected hexagonal basalt columns (the same geological process that created the striated Devils Tower in Wyoming).

Adventurers who want a bigger challenge might consider joining the growing number of people in the informal Shenandoah 500 Mile Club—those intrepid wanderers who have hiked all of the park’s trails. Hikers who finish the “SHEN500” earn unlimited bragging rights, along with a special patch featuring one of the park’s famous black bears.

If you get lucky, you might see the real thing in Shenandoah. Several hundred black bears are thought to reside in the park, most active between April and November. Although black bears almost always scamper away at the sight or sound of humans, check the park website for tips on how to stay safe in bear country.