The top prosecutor for Arlington and the City of Falls Church began her four-year term in January. Here are her top priorities. 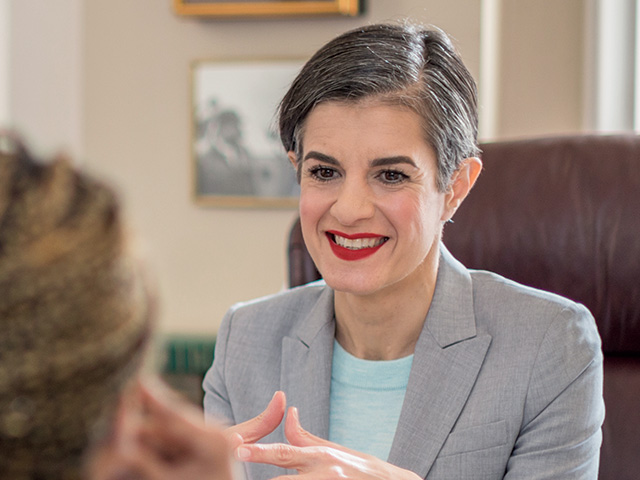 Elected in November to be the top prosecutor for Arlington County and the City of Falls Church, Dehghani-Tafti is a former public defender who ran on a reform platform. She lives in Arlington with her husband and two children, and began her four-year term in January. This interview was edited for clarity.

How did your background lead you here?

I’m an immigrant [originally from Iran] and grew up really poor. I came to [the U.S.] when I was 4 and had to navigate my own way because my parents didn’t know how the system worked. They didn’t speak English for many years. My mom and dad worked several jobs, and my mom used to go into dumpsters for produce. We couldn’t afford that and rent. I feel empathy for folks who have had similar experiences. That’s a big reason why I became a public defender.

It’s the top public safety officer in the entire court system. I think about it in terms of buckets. The first is deciding what cases to prosecute—what’s the focus and which ones have public safety value. Another bucket is managing personnel—making sure everyone is supervised and trained, and that we are providing an opportunity to all for professional growth. There’s also community engagement—teaching people what a prosecutor’s office does. For decades, no one has really done that. It’s a two-way street, pushing out information and education but also hearing what the community’s concerns are. Then, there is policy, the broad strokes of what we want our criminal-legal system to look like.

Traditionally, the job has centered more on enforcement than policy. Yet you campaigned on a policy platform?

I’m going to disagree with you. If you look at how much power the Virginia Association of Commonwealth’s Attorneys has over legislation—advocating either for or against legislation, that’s policy. Every day in the courthouse, decisions are made about how strongly we are going to enforce the Fourth Amendment or where to put our resources or which crimes we are going to pursue. These decisions are usually not done haphazardly. It may not be articulated in a transparent way, but it’s still policy. All I am saying is that I am going to be transparent about what’s priority and policy.

What will you be focusing on during the first few months of your tenure?

I think moving to vertical and community prosecution is very important. That means giving ownership of a case to one prosecutor. Right now, a case can pass between four or five different prosecutors. That’s unfair to police, victims and defendants. There’s a lot of institutional knowledge that gets lost in between. Why it was done this way in the first place is unclear to me. It’s a challenge to fix quickly, though. It requires reshuffling offices and coordinating with the court calendar. The shift will be gradual, but we are working toward it.

It’s a passion project of mine. Rather than asking who broke the law and how do we punish them, restorative justice talks about who was harmed, what do they need to heal and whose responsibility it is to help them. It asks the person who did the harm to search for change and transforms them into someone who doesn’t do it again. It focuses on rehabilitation rather than punishment.

These policy changes—including eliminating cash bail, which you’ve mentioned—come with a price tag. Can we afford them?

It costs $182 a night to keep somebody in a local jail. If we are supervising them in the community instead, that’s pennies on the dollar. It’s a shift in resources, but not additional resources. In the long run, these [changes] will save us money, but it doesn’t mean we don’t need to invest on the front end. There are costs to our current criminal legal system, like the human cost of all the people that are locked out of the primary job market. Some estimates say it’s in the billions of how much would be added to our economy, plus there are families separated and kids growing up without parents. It all creates generations of poverty. It’s about shifting our perspectives and resources to creating healthier, safer and more cost-efficient communities.

How would you describe your style of governance?

What’s been the biggest challenge for you so far?

I think it’s the gross mischaracterization of what reform prosecutors [stand for]. I say reform very specifically and not in a progressive sense, because many of these reforms cross ideological lines. All of the work we are doing is based on data and evidence. There’s this false critique that these reforms are making our communities less safe. We’ve been fed a story for decades that we have to incarcerate and have zero tolerance in order to be safe. More and more we are finding that harm reduction—for drug use, mental illness treatment, restorative justice—is more effective.