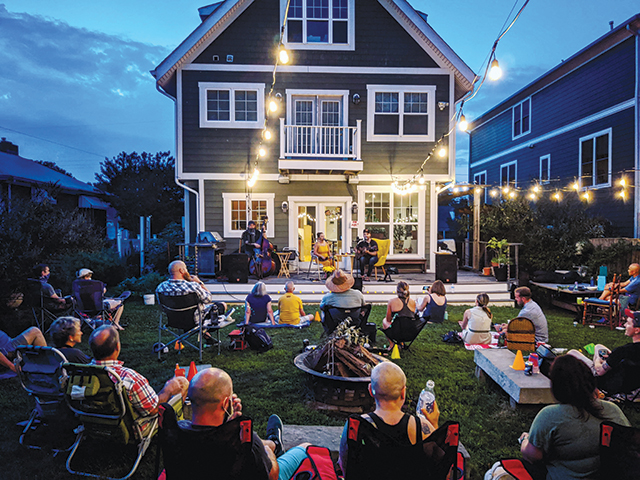 At the height of the pandemic, some folks were willing to do just about anything to get a live music fix—including purchasing a concert ticket without knowing where the show was going to take place.

In 2020, Arlington singer-songwriter Justin Trawick and his girlfriend, Lauren LeMunyan—after taking to Facebook Live with a musical series they called “The Justin and Lauren Show”—moved their act to a run of small, ticketed performances in the backyards of area homes.

Soon, Trawick’s band, The Common Good, was in on the idea, popping up in a secret outdoor location to perform an ongoing series called Common Good on the Block. Ticket holders for the intimate sets aren’t informed of the venue until 48 hours before showtime.

“[The secrecy] adds to the allure and the excitement of it all,” says Trawick, who lives with LeMunyan in Westover and cites Greensky Bluegrass, G. Love and David Gray among his musical influences.

The band donates a portion of the proceeds from each gig (tickets are $30) to the Arlington Food Assistance Center (AFAC), and each show includes an on-site canned food drive. “Food insecurity is a big deal all the time, but especially during Covid when a lot of people aren’t working, not making money,” Trawick says. As of mid-May, the concert series had amassed a truckload of nonperishable food items and more than $700 in cash donations for AFAC.

The performances have been a win-win for the nonprofit, and for fans itching to hear music in person—not to mention for the band members, who feed off of playing for a live audience. At press time, they still had a few more secret summer gigs scheduled, but almost all were sold out. Locations TBA.