Life during Covid gave rise to all kinds of unhealthy coping mechanisms. Which ones do we need to unlearn? 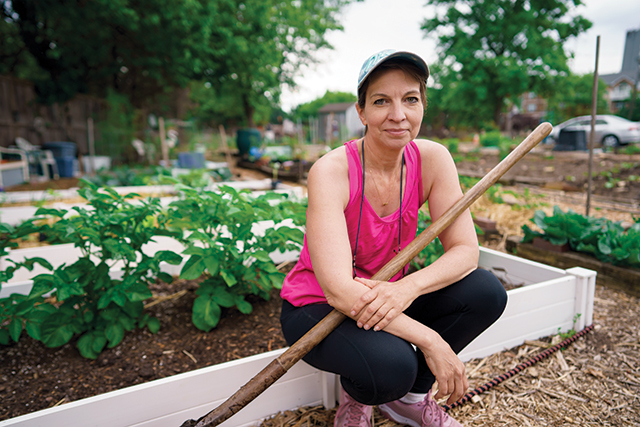 Allison Foster is now getting back to gardening and exercise. Photo by Matt Mendelsohn

Working out was always a part of Allison Foster’s routine, whether she was biking to her job as CFO for a nonprofit or hitting the gym to blow off steam.

The pandemic threw everything off kilter. Though social distancing meant that Foster, 54, could work from home—she and her husband, Mark, a portfolio manager, live in Aurora Highlands with their two daughters, 14 and 11—the gym was closed, and other demands quickly ate up the time she had once reserved for a good sweat.

Worried for her kids’ well-being during lockdown, Foster scrambled to find new extracurricular options to keep them engaged (her younger daughter ended up doing a virtual learning program with Synetic Theater in Crystal City). At the same time, she was coordinating support for her elderly parents, who live in Louisa County, Virginia, near Lake Anna. Her dad has Parkinson’s disease and dementia, which got “much, much worse” without social interaction, she says, and her mom’s heart problems “kind of snowballed” amid feelings of isolation and depression.

Distance made it harder for Foster to help her folks, who are an hour’s drive from the nearest hospital. “To call an ambulance is a big deal,” she says. Sometimes “they call me from an hour-and-a-half away and say, ‘Can you come down here and help?’ They have two neighbors who have been a godsend, taking them to the doctor and to get groceries.”

The constant stress, “compounded by the fact that I have not been going to the gym or biking…means I am terribly out of shape now,” Foster says. “I usually love to exercise, but I just could not be motivated. I have fallen into the habit of working far too many hours, which means a lot of time sitting in my office chair and nothing to break up my day.”

Also, she has gone from being a sound sleeper “to spending a lot of nights on the couch reading, trying to fall back asleep.”

As pandemic protocols shifted our way of life this past year, many of us found ourselves stretched thinner than ever before, juggling roles as parents, caregivers, employees, teachers, cooks, maids, coaches, sounding boards, tech support providers and peacekeepers. (“The open space concept looks great on television,” Foster says of the current trend in home design, “but doors are sometimes a good thing.”)

In the process, our own health and well-being often took a back seat. Falling into survival mode, many of us developed ways of coping that were less than positive.

A “Stress in America” poll released by the American Psychological Association in March found a majority of essential workers (54%) reporting that they had relied on unhealthy habits to get through the pandemic. Two in 5 said they had gained more weight than intended over the last year—an average of 29 pounds. Nearly 1 in 4 adults reported drinking more to cope with stress, and 2 in 3 reported sleep disruptions stemming from anxiety and shifts in routine.

Aaron Dodini, director of Dodini Behavioral Health in Rosslyn, has seen the toll firsthand in the patients who visit his practice.

“People are working more hours. They’re eating more junk. They’re exercising less,” he says. “These are key factors for self-care, and as self-care gets eroded, it affects mental health.”

Individuals who are stressed also tend to fall back on old bad habits, he says. “If someone had an eating disorder earlier, those eating patterns start to kick back in. There’s a regressiveness.”

Those who managed well through the pandemic were “the ones who connected” with others, Dodini says. “That seems to really be an antidote to the challenge of isolation.”

Though working from home offered a break from commuting, workplace experts note that a lot of employees simply filled the time and began working more—not less. In a nationwide survey conducted last summer by the staffing firm Robert Half, 45% of professionals said they routinely work more than 8 hours a day. Nearly 70% said they work on weekends.