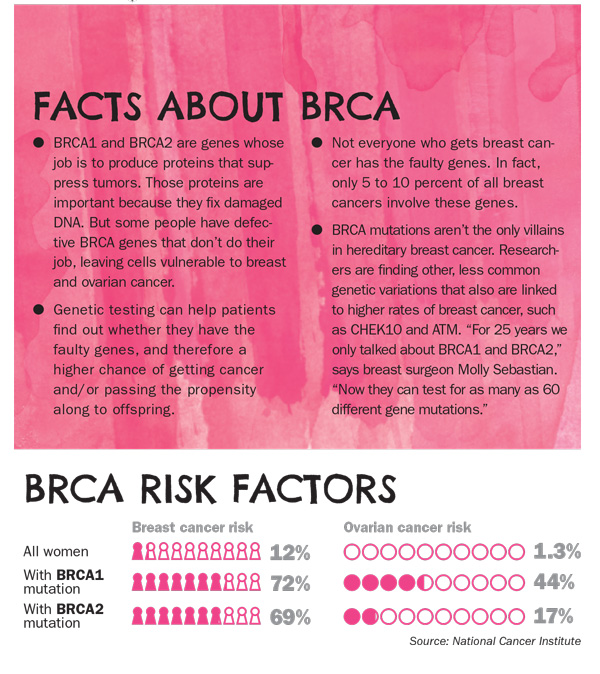 Today, physicians are spending more time helping women weigh their options. Each case is different. The decision might not be the same for an 80-year-old, for instance, as it is for a 35-year-old, given the lifetime odds of cancer weighed against the risk of any surgery, says Neelima Denduluri, a Virginia Hospital Center oncologist who specializes in breast cancer treatment. “It’s a very personal choice,” she says.

Surgery is not without risk. With it comes the possibility of infection—especially if breast reconstruction includes implants—as well as blood clots, pneumonia, and skin issues or scarring that require further surgery.

There’s also a time factor. The initial recovery period lasts about six weeks on average. Some women have a mastectomy and reconstruction at the same time, while others do them as separate procedures.

Though a bilateral mastectomy is not a guarantee against future breast cancer, it does lower the odds significantly, to about 5 to 10 percent, according to the National Cancer Institute.

Still, some doctors worry the pendulum has swung too far, prompting certain patients to request mastectomies that are unwarranted. Surgery probably isn’t needed for someone with, say, a 17 percent risk of getting breast cancer, says Sebastian. “Medically you’ve got to have evidence of a true cancer risk.”

Having both breasts removed when cancer is found in one breast also doesn’t diminish the risk of the original cancer coming back in another part of the body, Denduluri says, citing a study in the journal Annals of Surgery in March 2017. Yet that same study found that the rate of women opting for preventive mastectomies in the cancer-free breast tripled from 3.9 percent in 2002 to 12.7 percent in 2012.

Otis Brawley, chief medical and scientific officer of the American Cancer Society, says certain women may be seeking prophylactic mastectomies prematurely after their test results show genetic anomalies with unknown risk factors. Some anomalies are best described as minor “spelling errors” in the genome sequence, he explains, but don’t mean higher cancer risk. He recalls one patient who had a double mastectomy after receiving an abnormal test result, and was devastated six years later when researchers determined that it wasn’t a mutation after all—just one of those spelling-type anomalies.

“We’re concerned some women are getting this procedure and not understanding what their risk really is,” says Brawley, an oncologist and professor at Emory University Medical School, when they may be better served by nonsurgical alternatives, such as medications like raloxifene, which treats osteoporosis but also reduces breast cancer risk. “It really is a complicated business where people need to go to the experts.”

It’s tough to know exactly how many women are opting for preemptive double mastectomies, he adds. While patients with a cancer diagnosis have their medical information logged into oncology databases, healthy women who have the procedure as a preventive measure are not tracked.

But there is evidence that more women are going this route. A 2008 survey published in the International Journal of Cancer found the practice more common in the U.S. than in any of the other eight countries in the study.