An Ashton Heights Bungalow Gets a Dramatic Makeover

This Arlington remodel did not go exactly as planned. The end result is stunning. 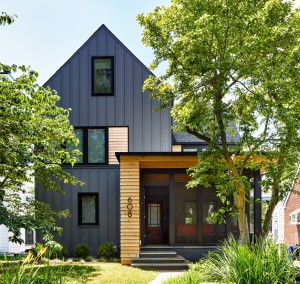 Katie and Walter Maikish were renting an apartment in Clarendon in 2013 when they came across the 1930 red-brick Cape Cod in Ashton Heights. Charmed by its cross-gabled roof and screened front porch—and the fact that the previous owners had already renovated the kitchen and added a light-filled family room off the back—they put an offer on the place less than 24 hours later. 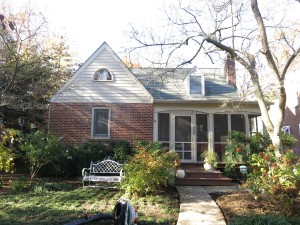 The original house (before)

By 2018, they had one child and a second on the way, which got them thinking about expanding the 3,000-square-foot bungalow a bit more. The house had two small bedrooms on the first floor and one on the second floor, but they didn’t want to be that far away from the kids. Their preference was to have everyone sleeping upstairs.

“We figured we’d have to [build] on top of the family room,” Walter says.

A walk in the neighborhood led Katie to Michael Winn, president of Winn Design + Build in Falls Church. “We did a renovation just up the street from them,” Winn says. “They saw the sign and reached out to us.” 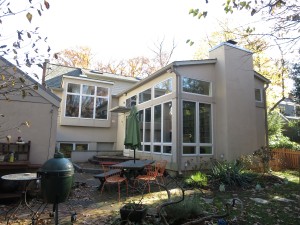 Listening to the couple’s wish list, project architect Stan Khramov and designer Jennifer Hall hashed out plans for a new primary suite above the family room, thereby expanding the second floor with enough square footage to get both of the boys’ rooms upstairs, too, along with a shared hall bathroom and a laundry room. 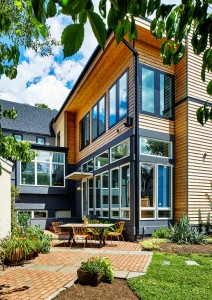 The plan also called for finishing the basement, creating an attic space, converting one of the first-floor bedrooms into a mudroom, redoing a first-floor bathroom and removing a wall between the living and dining areas. The decking on the front porch needed to be replaced, and the old home’s plumbing, electrical and HVAC systems were badly in need of an upgrade. The interior staircases also weren’t to code.

When demolition began in March 2019, Walter had just broken his leg in a skiing accident and Katie was in the final months of her second pregnancy. They decamped to a rental house about a mile away. 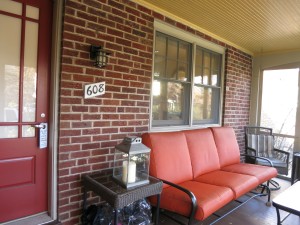 The original screened porch (before)

As construction got underway, however, some new wrinkles emerged. The original footings for the screened porch were damaged and in need of replacement. While they’re at it, why not make the porch bigger? Walter thought, picturing an airy spot that he could use as a cigar lounge. Winn updated the construction documents and resubmitted them to the county for approval. 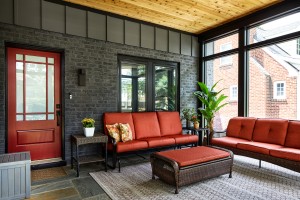 The expanded screened porch (after). Photo by Stacy Zarin Goldberg.

The plans shifted again when the couple—both of whom work from home in IT sales—began rethinking the attic space as a home office for Katie. This necessitated a change in framing and another round of amended permits. “It was like designing the car while you’re driving down the road,” Winn jokes, good-naturedly.

And then came an act of God. About halfway through the project timeline, a storm sent a 100-year-old white oak tree in the backyard crashing into the family room. 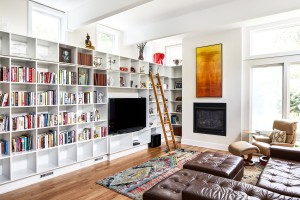 The light-filled family room (after). Winn Design + Build repaired the tree damage and added a new ceiling with structural beams to support a second-floor addition. Photo by Stacy Zarin Goldberg.

Despite the audibles and unanticipated setbacks, the renovation was completed in February 2020, less than a year after construction began.

The front of the house (after). Photo by Stacy Zarin Goldberg.

Today, the home’s striking design marries Katie’s penchant for modern with Walter’s preference for a more traditional aesthetic. Architecturally, the cross-gable roof configuration remains, though the house is now taller, with a dramatic pitched roof and an unfussy façade that mixes black Hardie-plank siding with vertical trim for a board-and-batten look. Lap siding made from natural cedar provides warm wood accents on the exterior. 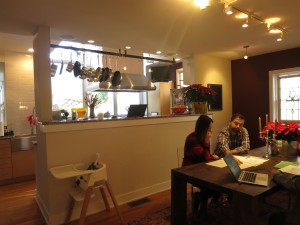 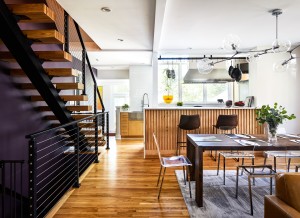 The kitchen and dining area (after). The new bar features a slatted wood kickplate and a light quartz countertop. A new staircase features a floating cable-rail system from Viewrail. Photo by Stacy Zarin Goldberg.

Inside, the main floor’s common areas flow together in an open plan that’s conducive to family time and entertaining, with rich color selections and finishes. Khramov and Hall lowered a pass-through opening between the kitchen and dining room to bar height, adding stools for extra seating and a slatted wood kickplate, which—unlike the previous drywall under the bar—is less prone to scuff marks. 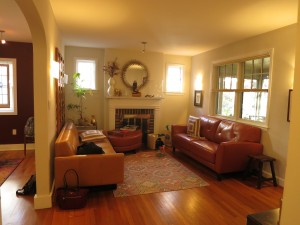 The original living room was small and compartmentalized.

In the living room, they sleekened the fireplace by removing the original mantel and brass doors and painting the bricks a dark charcoal. 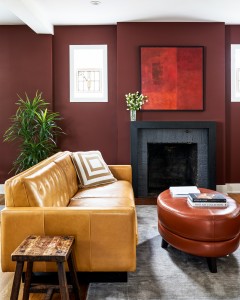 The living room (after).

While repairing the tree damage and restoring the family room to its original design, Winn’s construction crew installed a new ceiling with load-bearing beams to support the weight of the second-floor addition above it.

Katie and Walter now have a tranquil bedroom with large windows and a fireplace. It adjoins an enviable walk-in-closet and a Zen-like bathroom with frosted glass walls and a freestanding soaking tub. 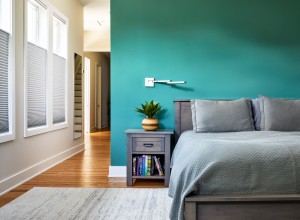 When it came time to rough out the boys’ bedrooms, Winn’s designers were the ones to suggest a couple of unplanned changes on the fly—a built-in reading nook in one son’s room and a circular alcove in the other, rendering each space much more interesting than a basic box.

“Sometimes my staff will come up with ideas that aren’t in the original program,” Winn says, and float them for consideration. The family loved both features. 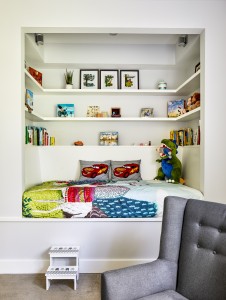 All in all, the story has a happy ending. Walter now looks forward to cuddling up with the kids each night to read bedtime books in that cozy nook.

And Katie has her own favorite hideaway—a home office/yoga/TV room, which is tucked into the attic, illuminated by skylights and accessible via a set of stairs from her bedroom. 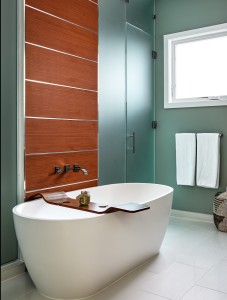 When stress sets in, she also retreats to that spa-like bath. “We love that bathroom,” she says. “The bathtub is heavenly.”

Scott Sowers is a freelance writer based in Washington, D.C. 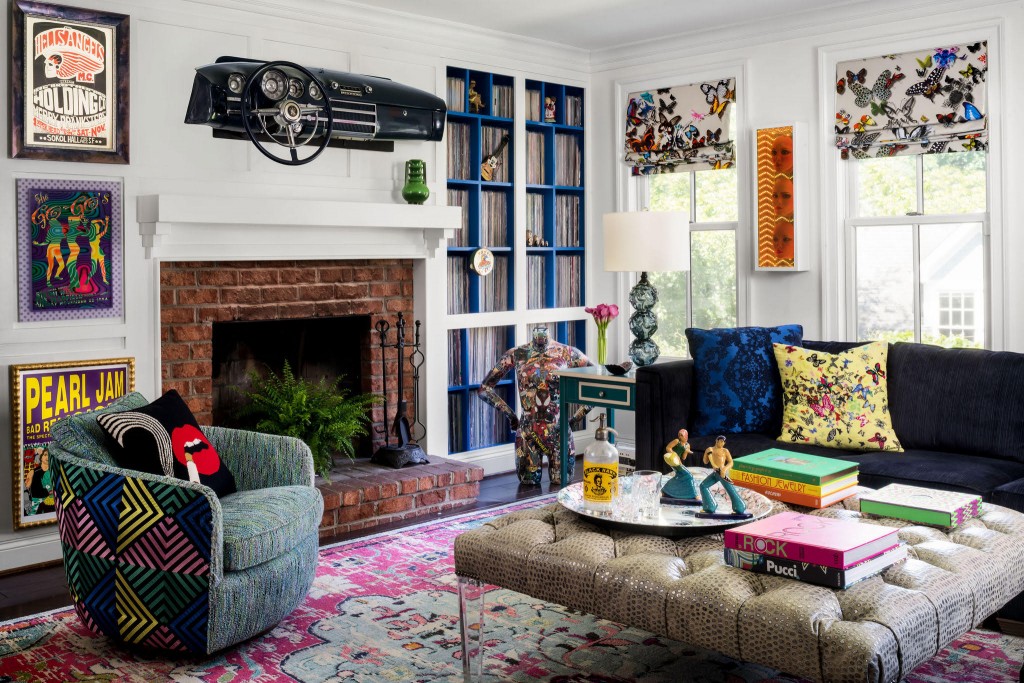 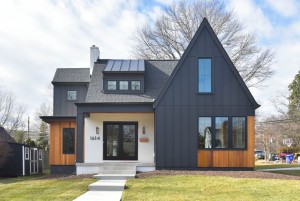 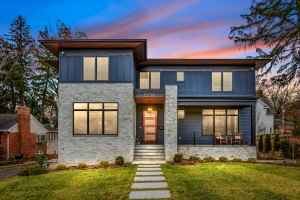 A Renovated Rambler Gets a New Look With Prairie-Style Architecture