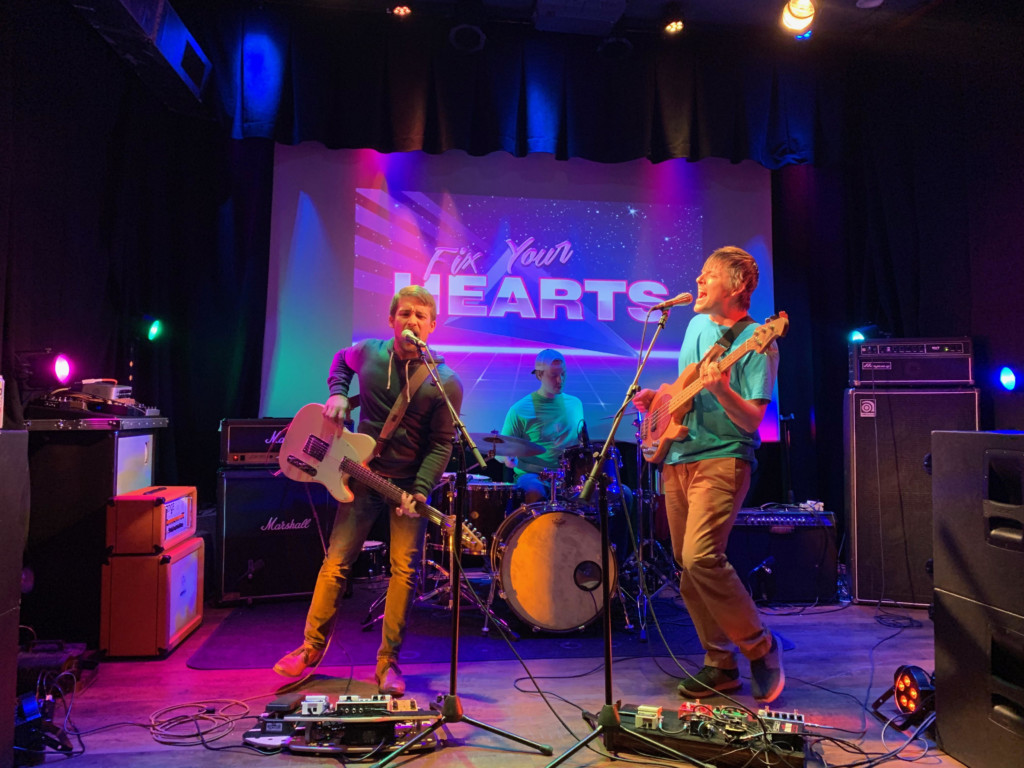 “This is the next great American album,” jokes drummer McKeon Milford of his band’s forthcoming release.

The group got off the ground in early 2018, after Elms, 31 (who is also a member of Alexandria band Oklahoma Car Crash), finished up an EP and started looking for collaborators to expand the project. Since then, Fix Your Hearts has performed at multiple spaces in the region, including the now-defunct Georgetown house venue Above the Bayou and the relatively new Pie Shop. On Jan. 25, they’ll be returning to the Falls Church VFW in a show with local bands Pagan Reagan and American Television. 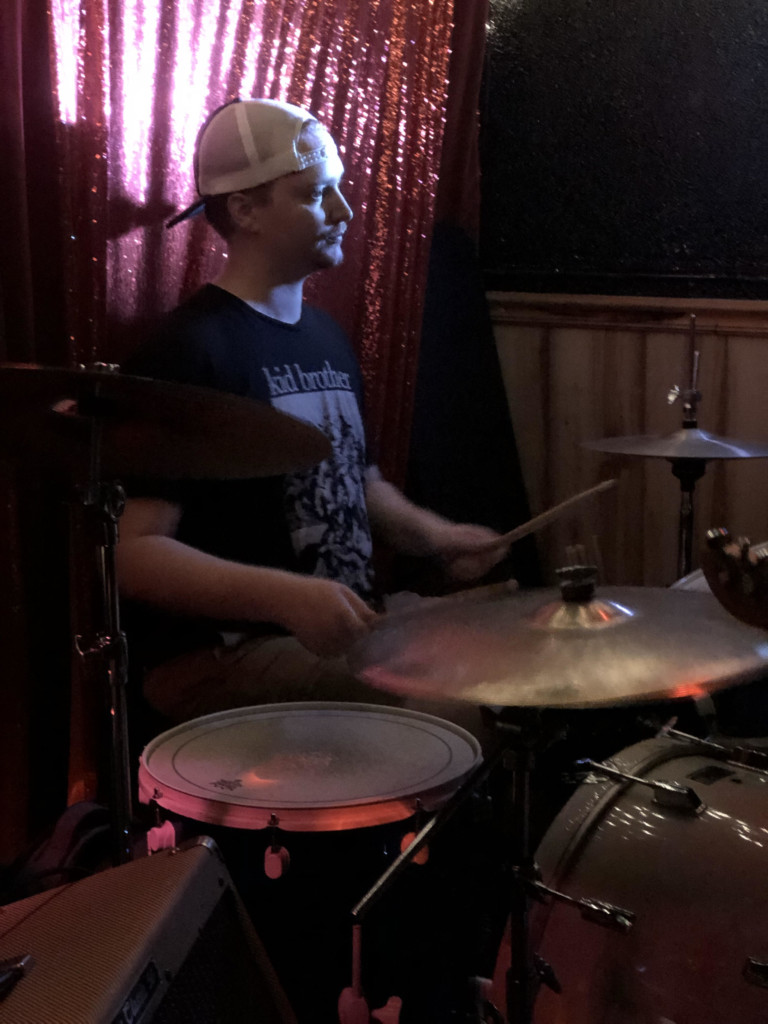 “I think I like this guy; he’s a good guy,” says Milford, 27, hoisting an oversize bottle of Miller High Life as he recalls his thoughts on the day he met Elms. Both of their significant others were bridesmaids at a wedding, and Elms—being the self-described “gregarious” guy he is—soon struck up a conversation with Milford about playing music.

Bowen, 30, had performed in another band with Elms in high school (called Effigy, a name that now makes them cringe). Once he was on board, the trio chose Fix Your Hearts as their moniker—a nod to a Twin Peaks episode that struck a chord with Elms. Indeed, the band’s music and banter are rife with film and TV references. “White Russian,” a cut off their EP, is an instrumental homage to Jeff Bridges’ character, The Dude, in the 1998 film The Big Lebowski (which they admit to having watched several times).

Yet while they are witty and jovial in conversation, their music is anything but. Fix Your Hearts is a sort-of low-key version of My Chemical Romance or original-recipe Dashboard Confessional, their sound veering toward emo with Elms’ impassioned vocals driving each song forward. 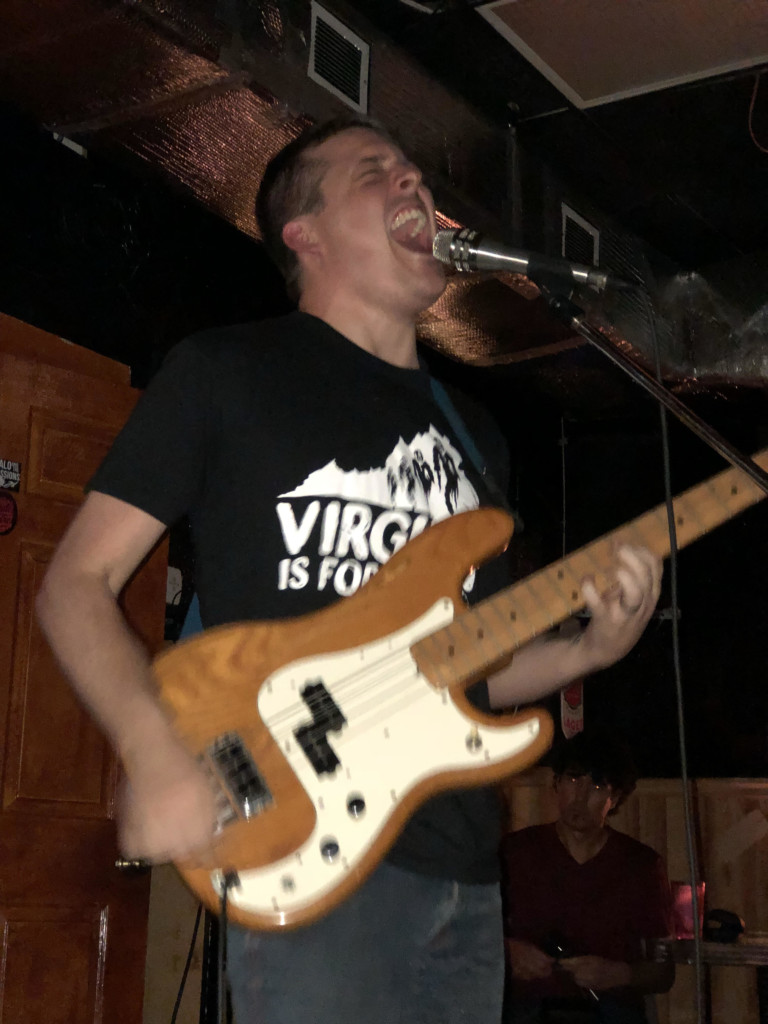 On the powerful “Leary Eyes, Weary Hearts,” which Elms wrote while at sea in the Navy, he sings: I won’t hope for God to come and save us/Build it up just to watch it burn/Straighten up. At the time, Elms says, he hadn’t played music in months, finding it difficult to spot other musicians among his shipmates.

“I was pretty down and out as far as emotionally and [in a] very stifling place creatively,” he says.  Sitting on the bow of the boat,  “the song just sort of came out.”

While Elms still writes most of the lyrics, the band’s songwriting approach has grown more collaborative, with Bowen and Milford readily contributing riff ideas. Fix Your Hearts is a democracy, according to Milford.

“We don’t have many disputes—unless you drink all my beer,” he says.

The band is currently working on its first LP with Ben Green from D.C.’s Ivakota studio, where their debut EP also was engineered. And while they hope to keep the performances rolling, Elms says the D.C. area could be a more inviting space for newish local bands.

“I wish it was easier for smaller bands like us to be support for regional acts,” Elms says, noting that there are lots of great bands in the area who could fit the bill. “I don’t feel like there’s a cohesive scene. There’s a lot of really good bands, but none of them are working together.”

Milford doesn’t necessarily see this as a problem; he just seems jazzed about the prospect of so many talented artists in one place. “It’s a shotgun blast of all these different things,” he says. 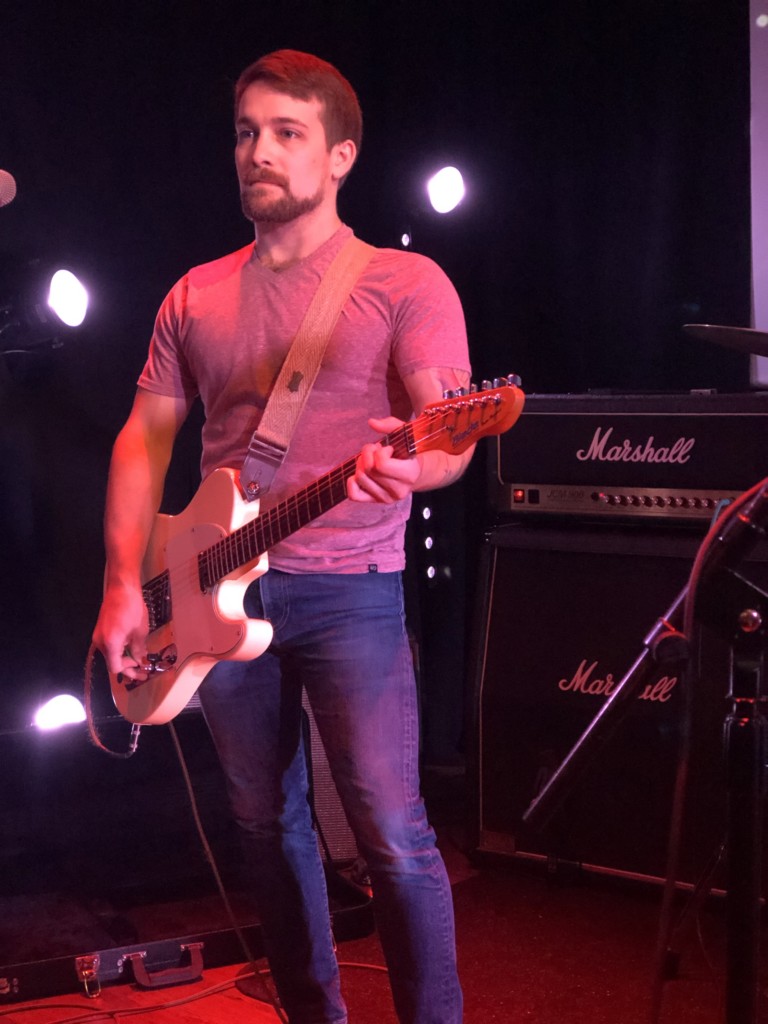 I make an attempt to hear what the band’s been working on lately, and Milford asks me in jest to sign a non-disclosure agreement. (Elms does send me a couple files later on, sans NDA, that have a somewhat harder vibe than their EP.) It’s hard to get a straight answer from these quipsters.

When I ask about their future goals, Elms responds, “Break up.”

But in all seriousness, they’re just hoping to get their album finished and “see where it goes,” Elms says. May The Dude light the way.

Local bands that should be better-known: Kid Brother (Leesburg) and People’s Blues of Richmond

50 Local Bands and Musicians You Should Know