This warm and relatable singer-songwriter is no stranger to the light. 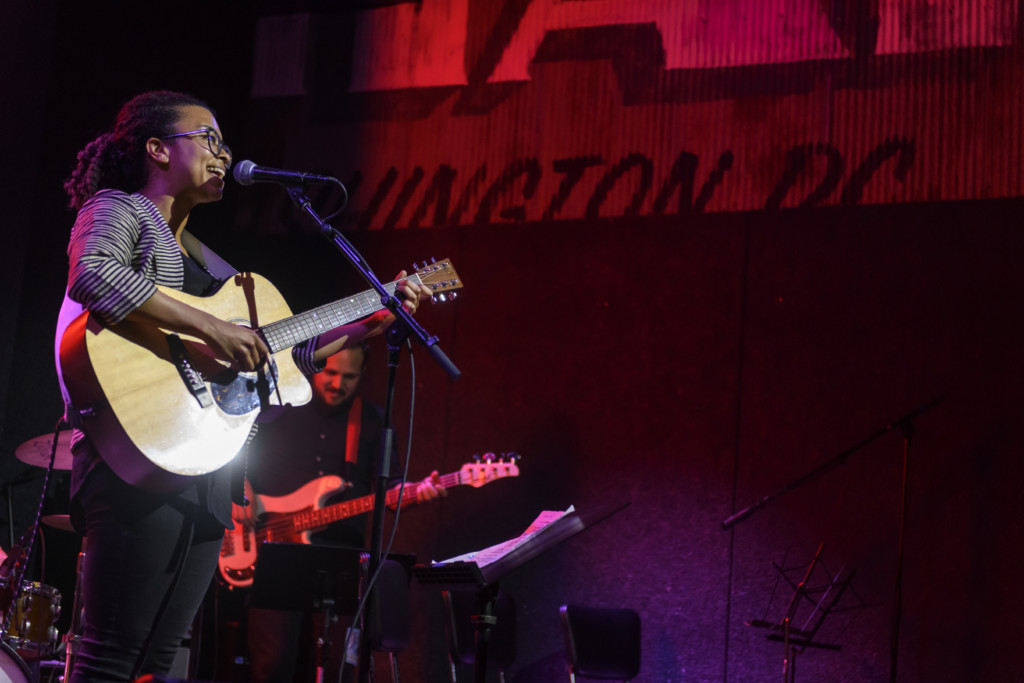 “My friends have pushed me into the pool several times over the years,” says Jasmine Gillison.

Sporting tortoise-shell glasses and a pinstriped scarf on a recent Monday night at Spider Kelly’s, the Arlington-based artist attributes many of her musical accomplishments—from recording her debut EP to attempting bass guitar in a Flashband—to a combination of friendly prodding and luck.

Born in upstate New York, Gillison moved to Fairfax County as a child, attending middle school in Chantilly and picking up the piano, guitar and clarinet (an instrument she continues to play in the Herndon Regional Wind Ensemble) along the way. At the University of Virginia, she sometimes found herself holed up in her bedroom strumming Jason Mraz and Nelly Furtado covers. But it wasn’t until 2010, two years after she graduated, that she stepped into the glare of her first spotlight during an open mic night.

“I remember shaking,” Gillison says of her performance at The Old Firestation No. 3 in Fairfax.

A lot has happened since then. After relocating to Arlington in 2013, Gillison sought out an open mic venue near her job at Artisphere. She found herself at IOTA, a now-defunct music house on Wilson Boulevard, legendary for its warm community vibe.

There, she connected with several of her current collaborators, including regular stage mate Matthew James Scott—one half of Matthew and Jasmine—and drummer Ben Tufts, whom she had previously met while both were working at a local music camp. Tufts ultimately would become the co-producer of her recently released EP, called Little Light.

On that record, which Gillison began recording after winning a raffle for free studio time at a Ben Tufts and Friends benefit show, the artist sings mostly ballads backed by a full band. She doesn’t mince words. “I’ve been knocked down / I don’t like myself like this,” she sings on “In My Chest,” a song she wrote not long after the demise of a relationship.

Many songwriters begin new tunes by constructing a melody and then adding dummy lyrics until they’ve settled on the real ones. Gillison works in reverse.

“The story comes to me first,” she says. “Then I’ll pick up the guitar and just start messing around, and wait until something sounds right or feels right.”

The EP’s most powerful song is also its most stripped-down: On “Last Page,” we hear only Gillison, who holds down vocals, guitar and clarinet. The tune begins with a tender guitar arpeggio, leading into an all-too-relatable lyric: “Here we are again / Last page of a chapter I don’t want to end.”

During a recent performance, Gillison says she forgot the words to the latter half of the song. In a way, it was a relief, a friend later told her. Some audience members had been near tears up until that moment.

Now 32, Gillison is earnest in both her music and in person—a quality she says she admires in other artists. At a December Women Who Rock show at Pearl Street Warehouse—sponsored by projectHERA, which promotes the work of female musicians in the D.C. area—musicians were asked to pay tribute to ’90s icons. Gillison chose singer-songwriter and Righteous Babe Records founder Ani DiFranco.

“I saw her perform for the first time last year at 9:30 Club, and it just felt like this beam of light was coming from the ceiling through her down to the floor,” Gillison says. “She is so strong in her convictions and her ethics and how she feels about how people should treat other people. And there’s so much strength and honesty in her music.”

Indeed, light and honesty are themes that also run through Gillison’s own narratives. In her EP cover art, she sits on a hardwood floor facing away from the camera, wrapped in vines of twinkling lights.

When asked what she’d one day title her memoir, she says she’d stick with Little Light.

“Often, there’s a cloudiness around my brain and just a feeling of unsettledness, and I still feel like I’m trying to figure out who I am and what I’m supposed to be doing in this life,” she says. “But I do feel that there’s this little light of hope and motivation that always comes up and is always there.”

Gillison will be performing at The Pub & The People in D.C. on March 17.

Dream bands to play in: Paramore, Grace Potter & The Nocturnals and Metric

Currently reading: Adventures for Your Soul: 21 Ways to Transform Your Habits and Reach Your Full Potential, by Shannon Kaiser