How Snow Day Decisions are Made and Who Makes Them

It’s 3:45 a.m. on a frosty Tuesday and Linda Erdos’ laptop is glowing in the dim light of her apartment while heavy white flakes fall outside her window. As Arlington Public Schools’ (APS) assistant superintendent of school and community relations, she’s keeping a close eye on the weather—knowing that the announcement she makes an hour from now will either endear or vilify her in the eyes of Arlington’s 24,500 public school students.

Whatever the response, be it a flurry of angry Facebook posts from stressed parents (in the case of a closure) or the inevitable eye-rolling from disappointed students (if schools are open), she can take it. A former public relations manager for The Washington Post, Erdos has built her career around remaining cool in contentious situations.

Or in this case, warm. She’s not thrilled to be up in the wee hours, but she considers herself fortunate to be among those involved in snow day decisions who get to stay “at home in our Snuggies.”

Other members of her team aren’t so lucky. Several miles away, two “spotters” are bundled up and braving the icy conditions in the dark, driving scripted routes in four-wheel-drive vehicles to determine whether the roads are safe for school buses.

One spotter navigates Arlington County’s terrain north of Route 50, while the other traverses the areas to the south. 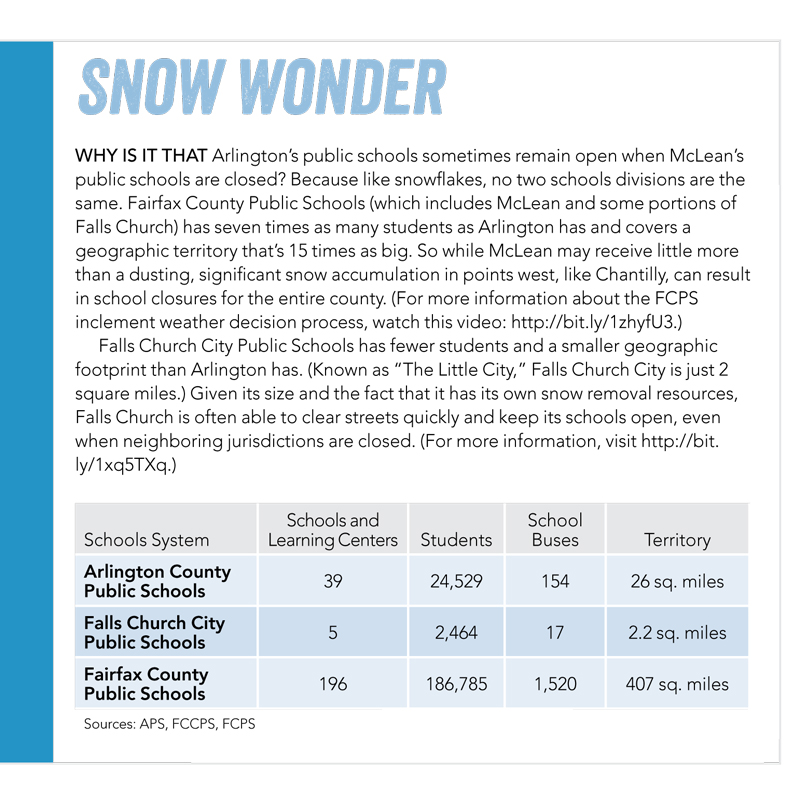 Meanwhile, an additional six to 10 members of the APS facilities department are out and about, checking the condition of bus stops, sidewalks and school buildings, then radioing their ground reports up the chain of command to Director of Transportation Services David McCrae.

By 4:30 a.m., McCrae will make a recommendation to Superintendent Patrick Murphy and Assistant Superintendent John Chadwick, who oversees APS facilities and operations, and together they will make a decision. At that point, Erdos and her team will deploy all of the communication channels in their arsenal to reach parents, students, staff and the media by 5 a.m.

LAST WINTER, snow days accumulated without mercy when frigid temperatures kept a blanket of white covering the ground for weeks. Many Arlington parents relished the excuse to make snowmen with their kids on that first day—but they felt a tad less appreciative by Snow Day No. 8, at which point work was piling up, kids were restless with cabin fever and the once pristine snowbanks had turned to a crusty sludge mixed with salt and exhaust soot. (Fairfax County Public Schools, which includes McLean and parts of Falls Church, saw 12 snow days in 2014.)

And they weren’t shy about venting their frustrations to school officials, whether they were irked by yet another day of scrambling for child care, or outraged that kids were being sent to school in what they perceived as unsafe conditions. “People react to snow differently depending on their comfort level,” Erdos observes. “If you moved here from Wyoming, you are laughing when we close school,” whereas others panic at the slightest dusting.

Of course, deciding when to close school is not an exact science. Each storm front is different, and therefore so is each set of potential problems. Ice storms cause power outages. Frigid temperatures cause pipes and fuel lines to burst. Snow accumulation makes roads impassable. A light freezing rain that results in black ice may ultimately wreak more havoc than inches of snow. And a National Weather Service Wind Chill Advisory (when wind chill temperatures fall between -15F and -24F) raises legitimate concerns about frostbite and hypothermia potentially affecting kids who are walking to school or waiting at bus stops.

“In the 14 years that I’ve been in the schools system, I don’t think any one of the decisions has played out the same way—simply because no storm is the same,” Erdos says.

Timing is also a factor. When a storm begins in the late afternoon or early evening, it is often obvious that, even if road crews work throughout the night, conditions will still be treacherous by sunrise. In those cases, the decision to close schools is often made before nightfall.

But things get trickier when the snow arrives after dark. At that point, administrators often prefer to wait and see the extent to which the forecast is accurate. The storms that give them the worst ulcers are the ones that are predicted to begin at 7 a.m.—two hours after the school closure decision must be made. 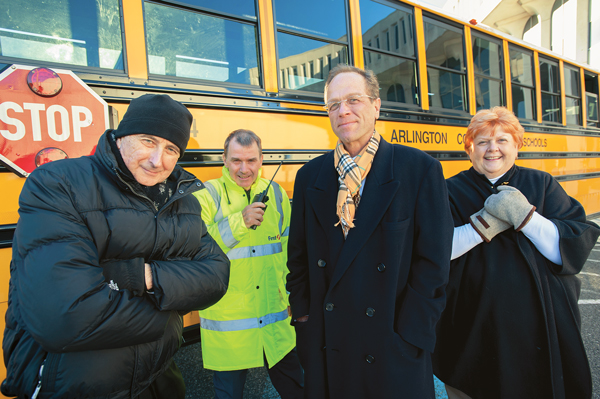 APS officials do keep an eye on closures in neighboring counties, although they don’t always follow their lead. Why? Conditions found in points west are not always the same in Arlington. Loudoun County covers a whopping 521 square miles (much of it rural) and Fairfax spans 407 square miles, whereas Arlington encompasses a comparatively more manageable 26 square miles of mostly urbanized land. Most Arlington schools are located near main roads that are pretreated and quickly cleared by county road crews.

Arlington’s weather patterns are also affected by the Potomac River, in that large bodies of water have the capacity to retain heat. This moderates surrounding air temperatures, meaning that Arlington often sees less snow accumulation than neighboring school districts that are farther from the river.

However, there are considerations beyond county borders that can affect closure decisions. A significant percentage of the 4,000 employees who work in Arlington schools live outside of Arlington, and school officials must also consider their safety.

That includes not only teachers and administrators, but also bus drivers and bus attendants who may be commuting in from outlying areas before they even begin to drive their routes in the morning.

“We recognize how early many of them have to leave home to get our students to school on time in normal weather,” says Chadwick. Bad weather makes those commutes even more difficult. 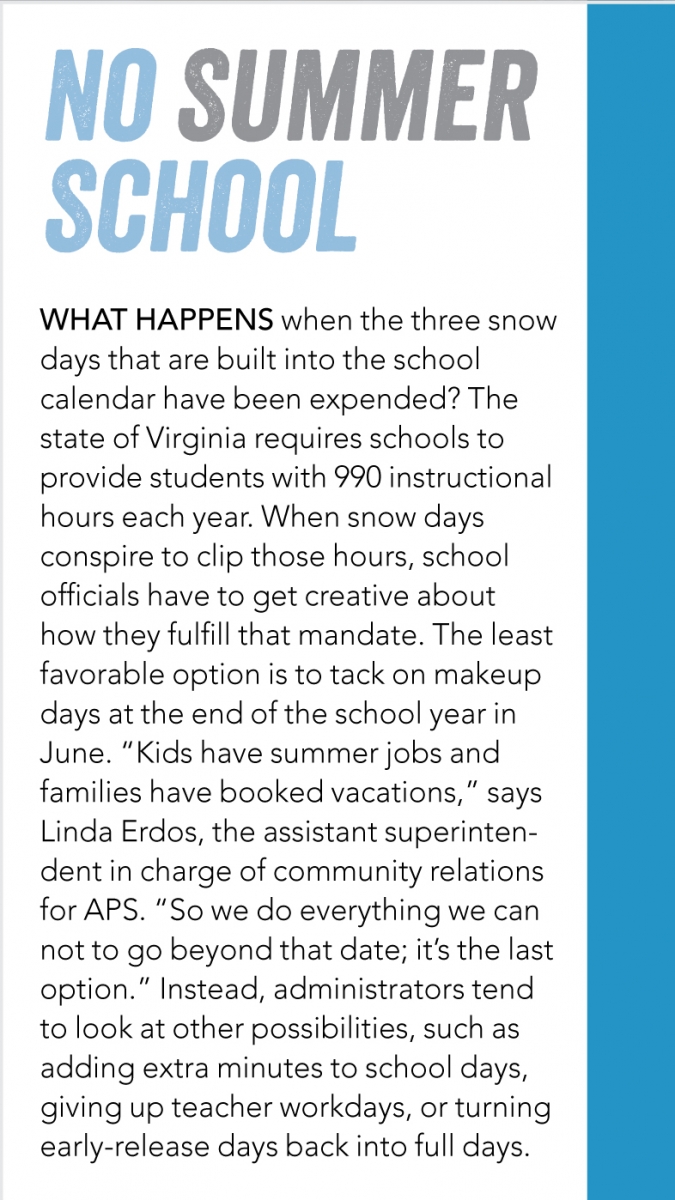 WHEN SNOW (or even the mere threat of it) is present, you can be sure school officials are not sleeping. In the dead of night, as students dream of canceled quizzes and epic snowball battles, Transportation Services Director McCrae keeps abreast of the county’s 46 plow-and-salt trucks—and the 90 drivers who operate them—to ensure that main arteries and emergency routes remain open.

Meanwhile, other staff monitor the county’s 39 school buildings and learning centers for burst pipes or lost power, while bus drivers take test runs to find out if their buses are able to turn around in neighborhoods (a bus may be able to get in, but can it get out?).

The APS bus fleet has a bus for each of its 133 routes, plus  21 extras as security. Together, they carry 10,000 Arlington students every day, collectively covering 755,000 miles during any given school year.

It helps that all 154 APS buses are parked and maintained at a central depot in Shirlington. “In the bigger counties, it’s harder because they have multiple depots and they’ve got to get maintenance crews out to different sites,” Erdos says. (By comparison, Fairfax County Public Schools maintains more than 1,500 buses.)

Repeated school closures can be unpopular with frazzled parents—particularly those who end up having to take extra days off of work without pay. (Moreover, APS parents aren’t the only ones affected, insofar as preschools and private schools located inside Arlington County typically follow APS’ lead on weather decisions.) But school officials emphasize that erring on the side of caution is paramount.

Last year, even with conservative closures and multiple delays, five APS bus accidents occurred during the snow season. Fortunately, all were minor fender-benders with no injuries reported.

No one likes the inconvenience, admits APS Director of Maintenance Jim Meikle, who has worked for the schools system since 2008. “As a long-term [Arlington] resident living on a block with over a dozen APS students and several APS staffers, including my wife, I take full credit when they all like the decision,” Meikle says, “but I blame Mr. Chadwick when they do not!”

Will this winter be any balmier than last year? Not necessarily. At press time, many meteorologists were already predicting another cold one.

Arlington writer Jenny Sokol is a parent and lifelong snow day fan who tosses and turns awaiting 5 a.m. school closure messages. She regrets to report that APS decision-makers do not accept bribes, nor do they allow “just a peek” at the authorization code required to close schools.