At Climb UPton, daredevils can scale and conquer 90 vertical elements, including ziplines, ladders and a 40-foot free fall. 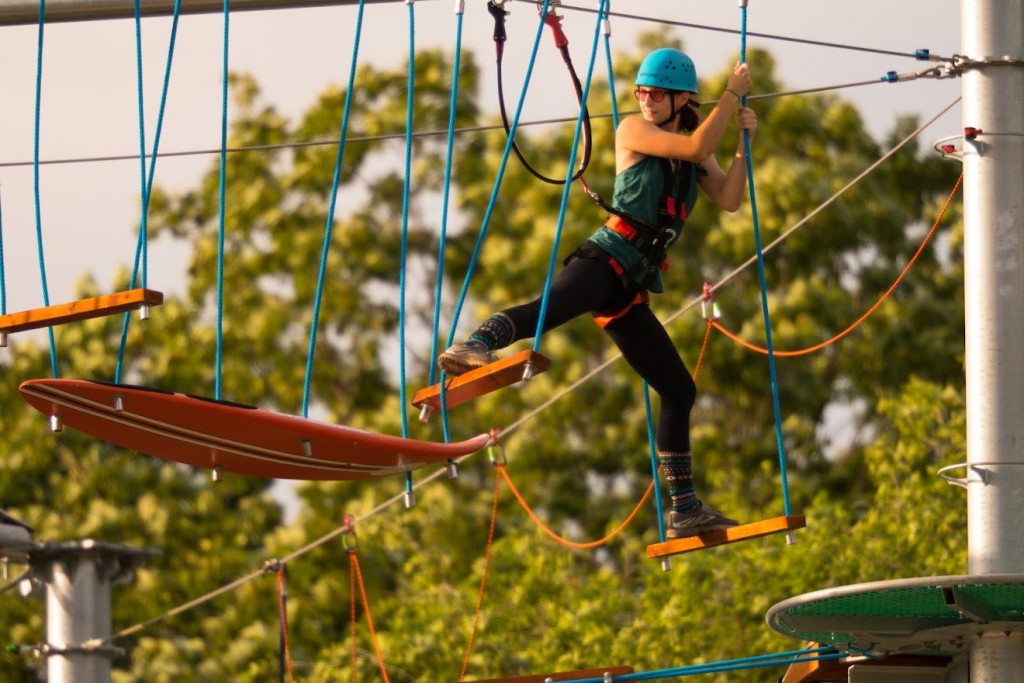 There’s Everest. There’s K2. And then there’s Climb UPton, the new climbing and ropes course that sits across the parking lot from Ocean Dunes Waterpark in Upton Hill Regional Park. It may soon make the list of “most iconic” spots in Arlington, says NOVA Parks executive director Paul Gilbert.

“We focus on unique destinations and creating facilities and experiences that are something that people would travel some distance to go and do—they’re not just a neighborhood tot lot,” Gilbert says. “Climb UPton is all of that.”

Ascending 40 feet off the ground with 90 built-in elements on three levels, the towering structure, which opened mid-summer, was formally unveiled on Oct. 15 with a fitting flourish: The ribbon-cutting was executed mid-air by ropes course manager Aster Minehart as she plunged from a free-fall platform—an element known as “Tarzan”—roughly as high as a three-story building.

Other features in the apparatus (all color-coded based on difficulty level) include zip lines, a zip sled, tunnels, ladders, a surf board, a cargo net and, for those without a fear of heights, a “hanging picnic table” at the tippy top.  Collectively they form a sort-of acrobatic scavenger hunt. 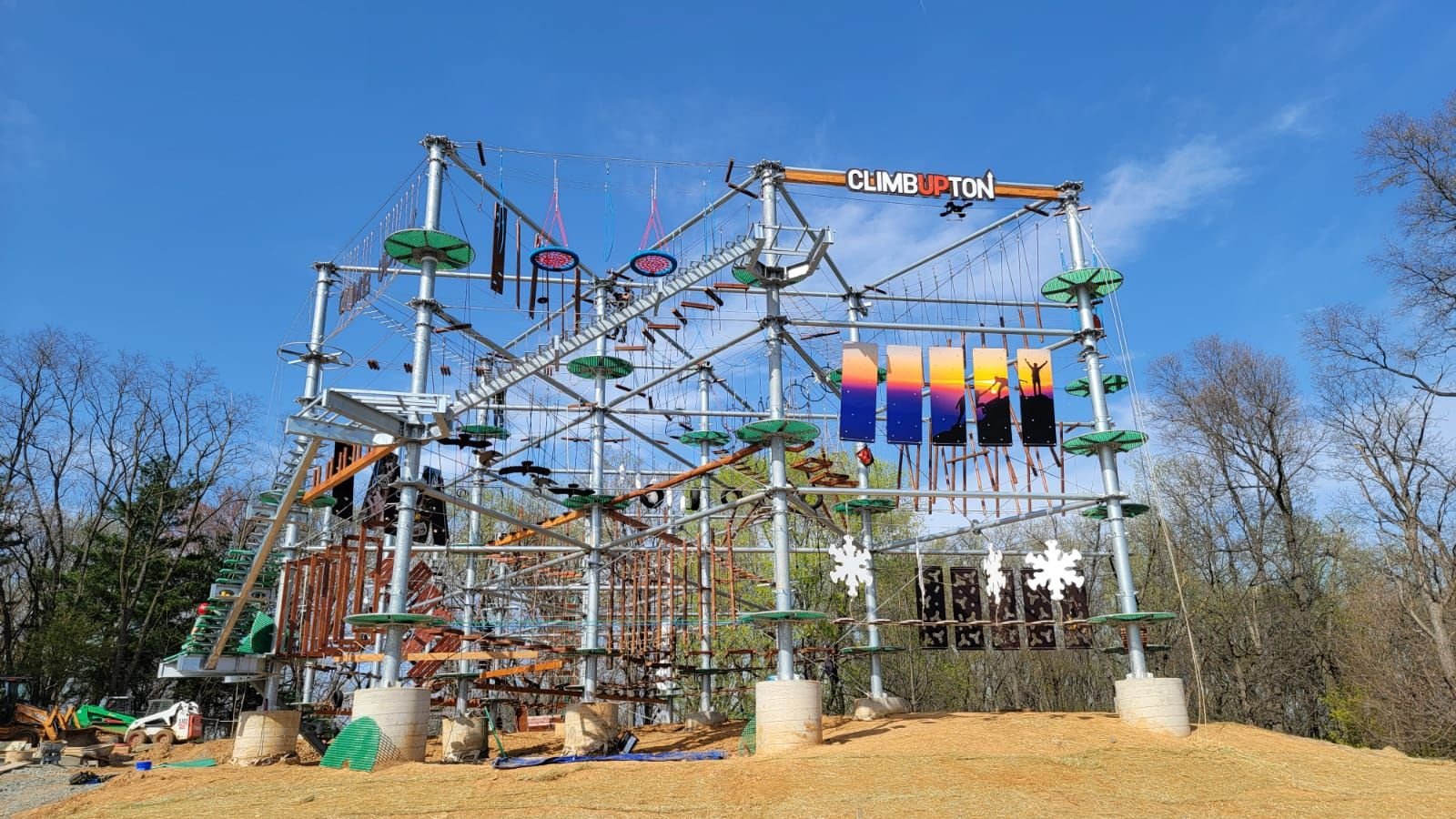 The course offers three levels of aerial challenges and a panoramic view of the neighborhood. Photo courtesy of NOVA Parks.

The project has been in the works for a while, says Gilbert, who has worked for the regional park authority that operates in six jurisdictions (Arlington County, Fairfax County, Loudoun County, Falls Church City, the City of Alexandria and the City of Fairfax) for 16 years.

“NOVA Parks is always looking for the new, the innovative, the wow factor,” he says.

After introducing a mobile climbing wall in Upton Hill Regional Park in 2015 and receiving a positive response, the park authority conducted a survey that suggested community members were interested in a ropes course, too.

About $4 million and six years later, Gilbert says, the park authority is now operating one of the few climbing towers of its caliber built in North America; the nearest one built with the same German technology that he’s aware of is in Franklin, Tennessee. 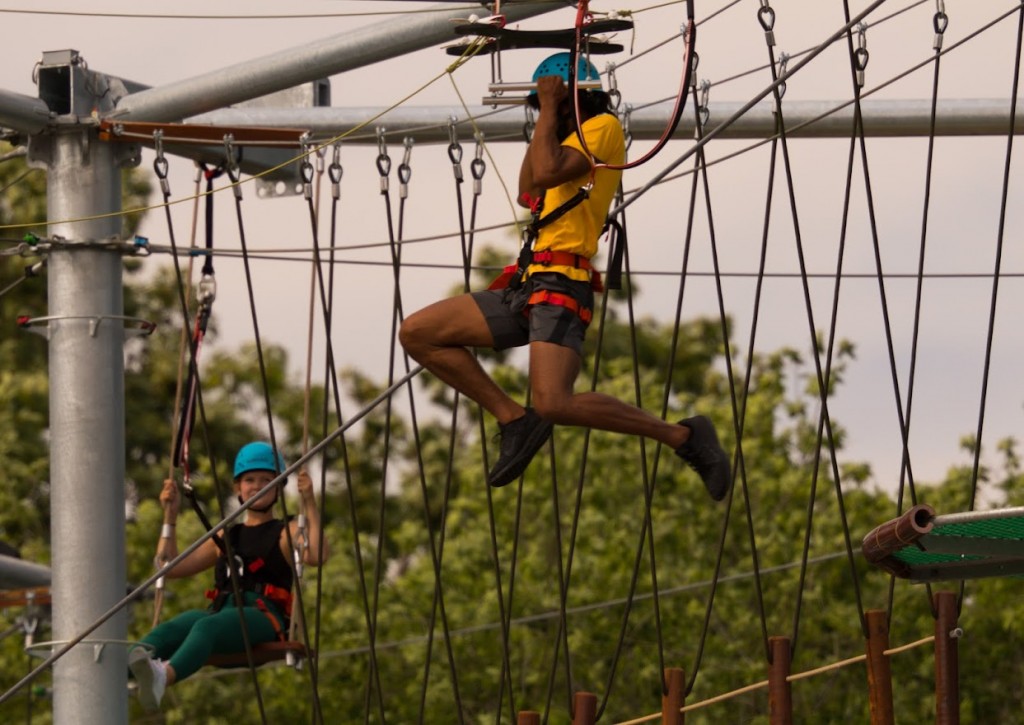 “It’s not a one-experience facility,” Gilbert says. “If you go, you use it, you love it, you can come back countless times and mix it up and try it in new combinations.”

Adventurists age 5 and up can tackle the course fearlessly with plenty of safety assurances. Harnesses and helmets are mandatory, and the course features a “smart belay” system that keeps each climber clipped in at all times. Specially trained staff are on site to offer assistance. Fees for a 90-minute climb range from $19.95 for the youngest aerial hikers to $49.95 for adults. For questions on accessibility, contact NOVAParks@NVRPA.org. 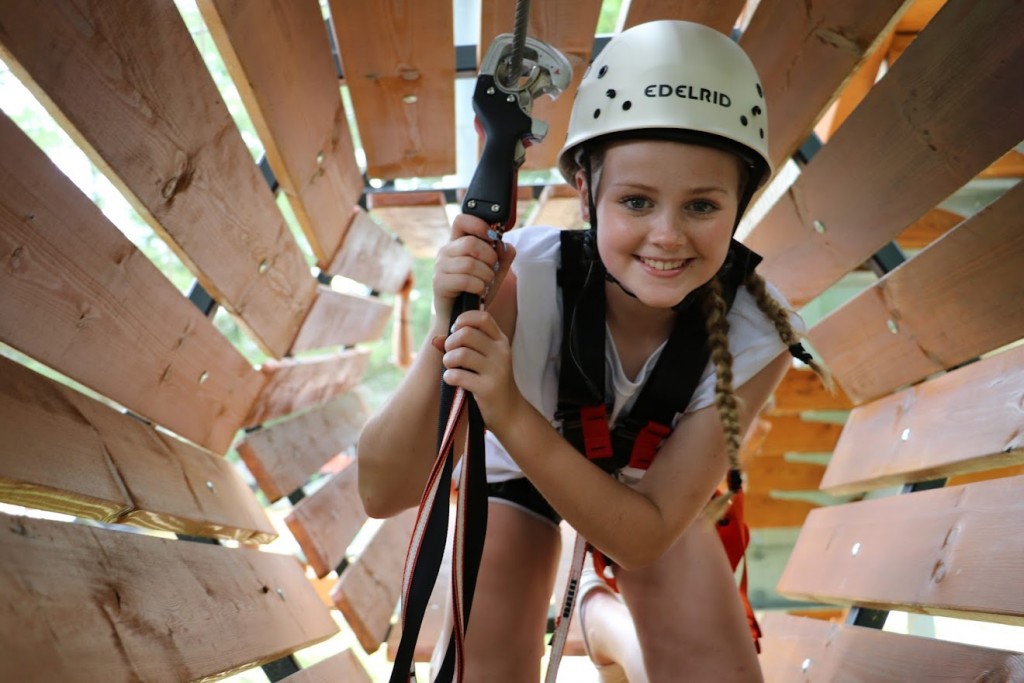 Of all the park’s elements, Gilbert says he’s most excited about the observation deck that sits atop the structure, affording a “panoramic” view of the fall foliage. But he has yet to enjoy that view himself.

“I have not climbed it yet,” he says. “I’m looking forward to that.”

Climb UPton is located at Upton Hill Regional Park, 6060 Wilson Boulevard, Arlington. The course will be open for climbing 4-8 p.m. Wednesday-Friday, and 11 a.m. – 9 p.m. Saturday-Sunday, through Oct. 31; 11 a.m. – 7 p.m. Nov. 1-4.  It then closes for the winter and will re-open in mid-March. Visit NOVAParks for more information on fees, hours, safety protocols and reservations.