Thirsty? Here are a dozen places to imbibe and unwind, whether you’re in the mood for a snug speakeasy, a raucous sports pub or a scruffy dive bar. 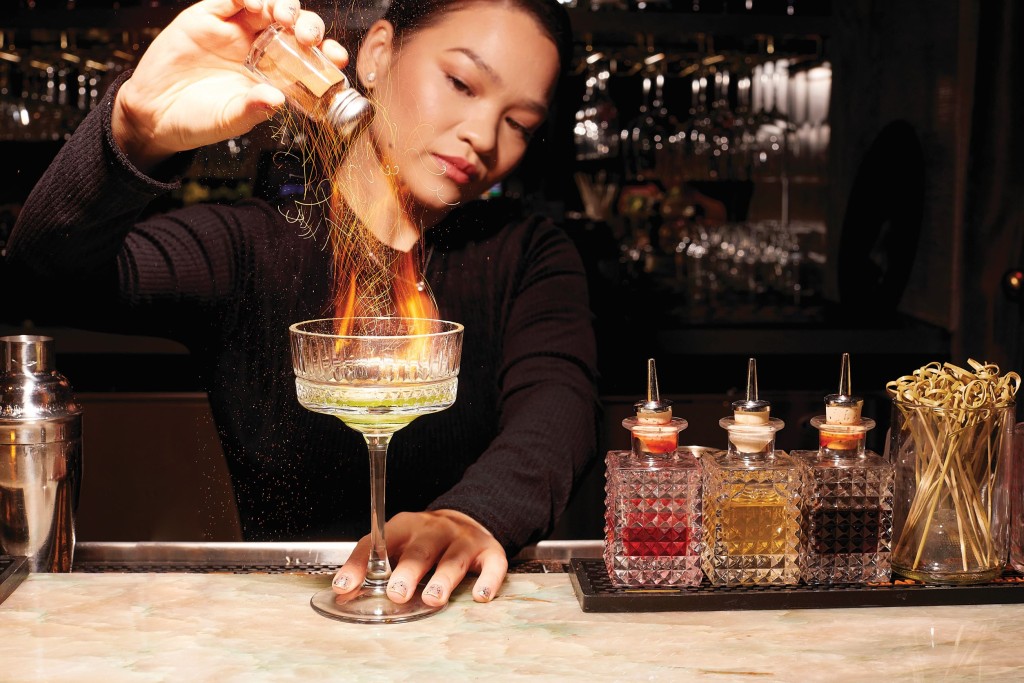 Each week, the barkeeps at this subterranean haunt add a new “captain” to the menu. That would be a special cocktail designed for adventurous tastes. This spirited experimentation has yielded quaffs ranging from a Negroni made with cocoa nib-infused Campari to a riff on Vietnamese pho featuring Thai basil and lemon-charred scallion syrup. (And, at one point, a tequila concoction called “It’s Lit” involving fire.) For something more traditional, the menu also offers spins on the classics, like a honey-foam-accented Bee’s Knees. No-proof partakers will appreciate that the bartenders give equal care to nonalcoholic cocktails with intriguing ingredients like Lapsang black tea and Szechuan cranberry soda. Tucked underneath sister restaurant Open Road in Rosslyn, Salt feels a world away from the grind, with flickering lighting, cozy red booths and an inviting granite bar. // 1201 Wilson Blvd., Arlington (Rosslyn) 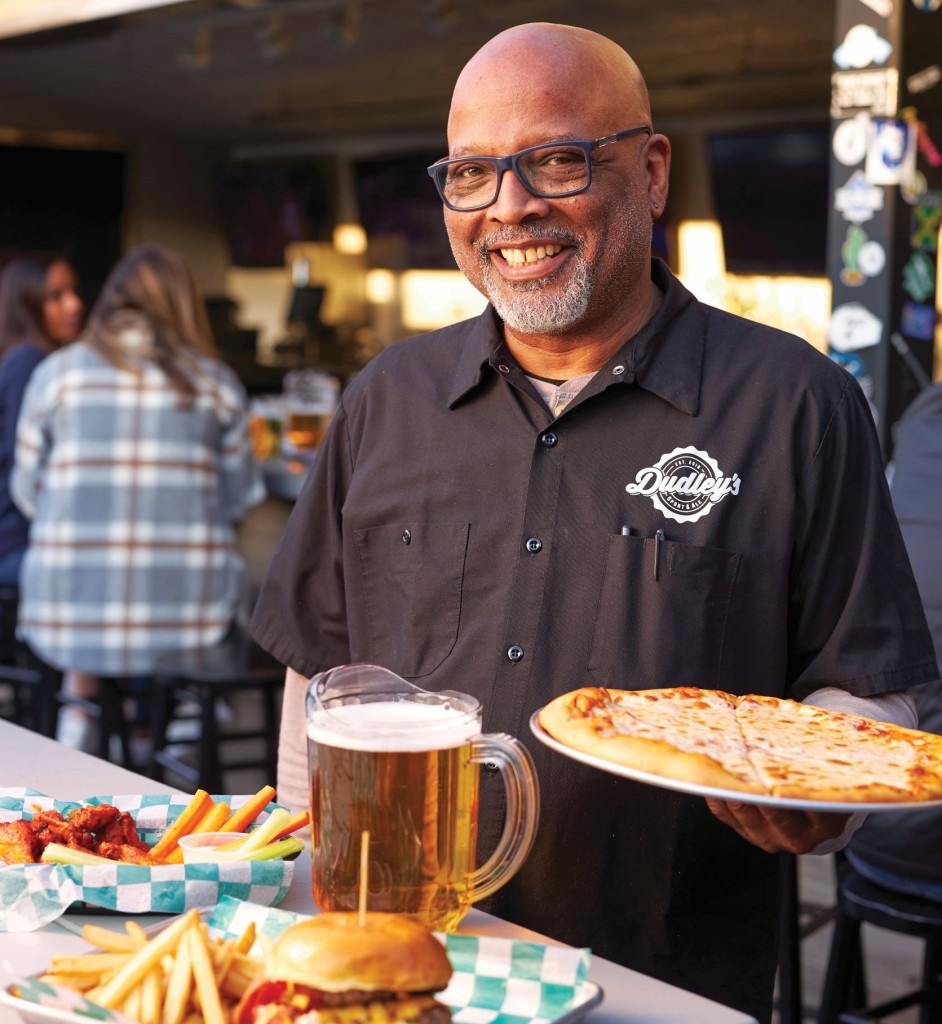 This sprawling, 11,000-square-foot watering hole in Shirlington has more than 40 big-screen televisions, so chances are good you can commandeer one to watch the game of your choice. But for the record, this is a Penn State bar (owner Reese Gardner is an alum). Dudley’s also has a massive 20-foot projector screen that’s visible “from every seat on the main floor,” according to event manager Victoria Johnson, plus a free-to-rent party room and a large rooftop outfitted with picnic tables, umbrellas and more TVs. During happy hour, the $10 specials include burgers, wings, pitchers and house-made pies from the kitchen’s pizza oven. Bud Light, orange crushes and seltzers like Loverboy (Hello, Bravo Summer House fans) go down easy here, as do the bottles of bubbly sold for $5 during weekend brunch. // 2766 S. Arlington Mill Drive, Arlington (Shirlington) 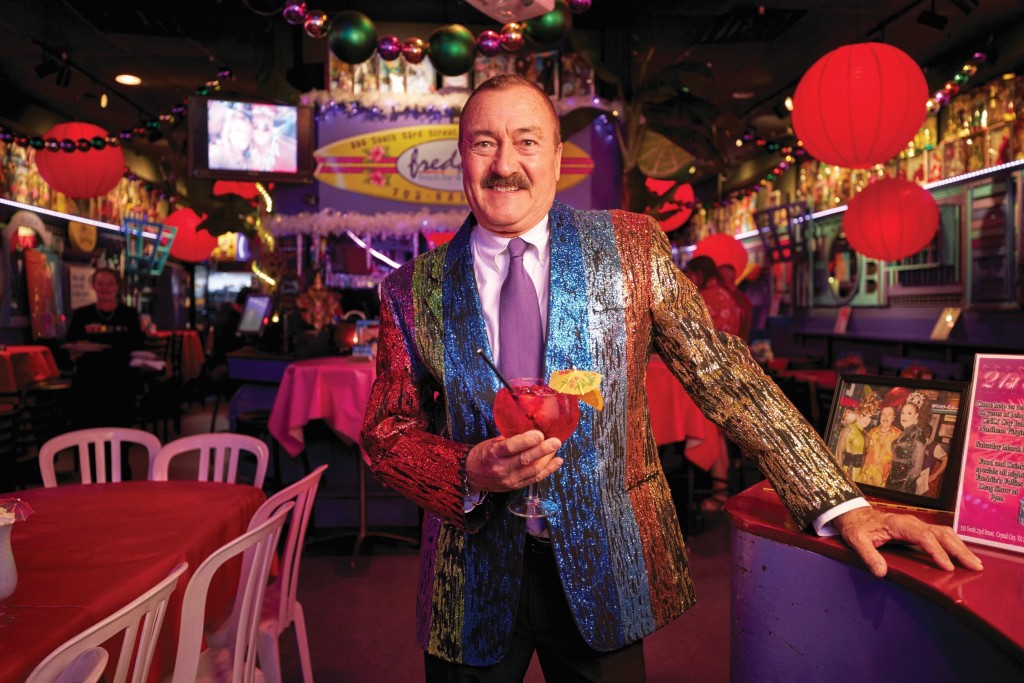 The vibe:  Glitz and kitsch with queer peers

When Freddie Lutz took over Crystal City’s Fox Hole bar 21 years ago, it was all dark wood and hunter green paint inside. “I never closed the doors, I just transitioned it to Freddie’s and started painting everything purple,” Lutz says. Drab no more, the place is now awash in pink, purple and pride, with kitschy decor like paper lanterns, feather boas, neon waves and boxes of Barbie dolls as a sort of found art project. The drinks are just as colorful, such as a “Flashing Flamingo” mixed up with watermelon and pomegranate vodka (a purple pina colada is in the works). In addition to nightly karaoke, Freddie’s hosts weekly drag shows, drag bingo and weekend brunch. Lutz says attitudes toward the LGBTQ+ community have changed for the better over two decades, but he’s always advertised his establishment on South 23rd Street as a “gay, straight-friendly” bar—a pitch that, back in the days of Don’t Ask, Don’t Tell, “gave all the gay folks from the Pentagon cover to come in.” Last year, the proprietor realized another dream when he opened an outpost of Freddie’s Beach Bar that is actually near the ocean—in Rehoboth Beach, Delaware. // 555 23rd St. S., Arlington (Crystal City) 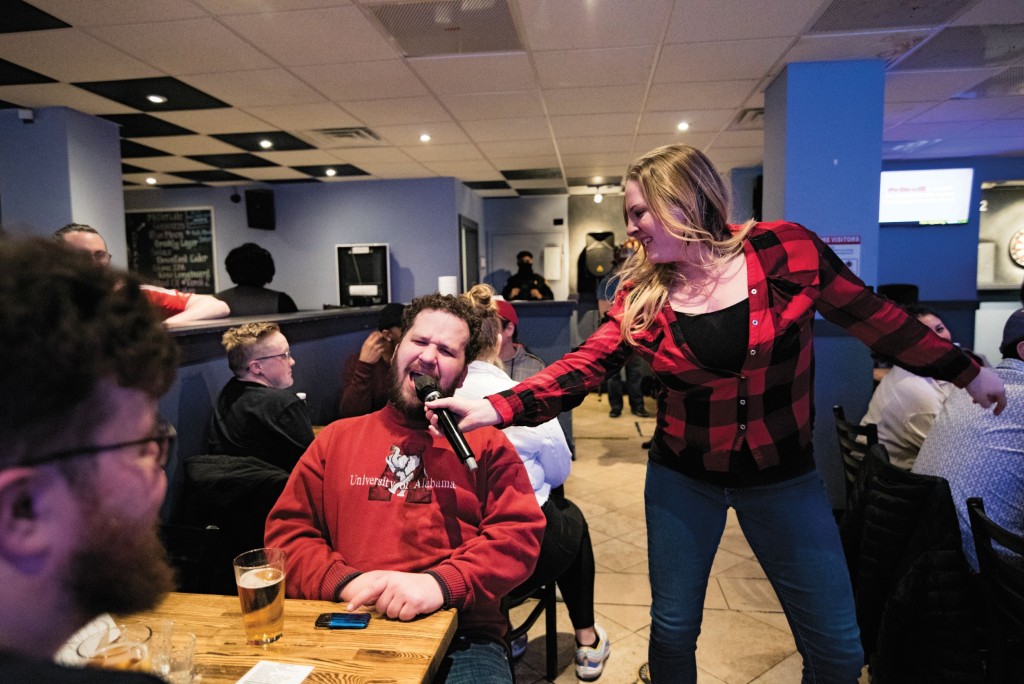 The vibe: No frills

It’s not quite as dive-y as it was before a modest face-lift a few years back, but this homey brick pub (whose initials stand for “Lower Arlington”) is still unadorned and proud of it. “Not upscale, definitely not Irish and with no fireplaces,” its website proclaims. If you’re craving an antidote to fancy, you’ll find it here, where drop ceilings, dartboards, televisions and hot sauces labeled with masking tape (to indicate the heat level) are the ambience. The lowbrow attitude is part of the charm at this neighborhood go-to, which opened on Columbia Pike back in 2006. Cheap drinks aside, the bar is also known for its karaoke, trivia nights and extended happy hours that run until 8 p.m., plus comfort food that regulars will attest is a cut above. Drop in for Taco Tuesdays with $5 margaritas, or $8 burger nights on Wednesdays and order a Budweiser in a bottle, without apology. // 2530 Columbia Pike, Arlington 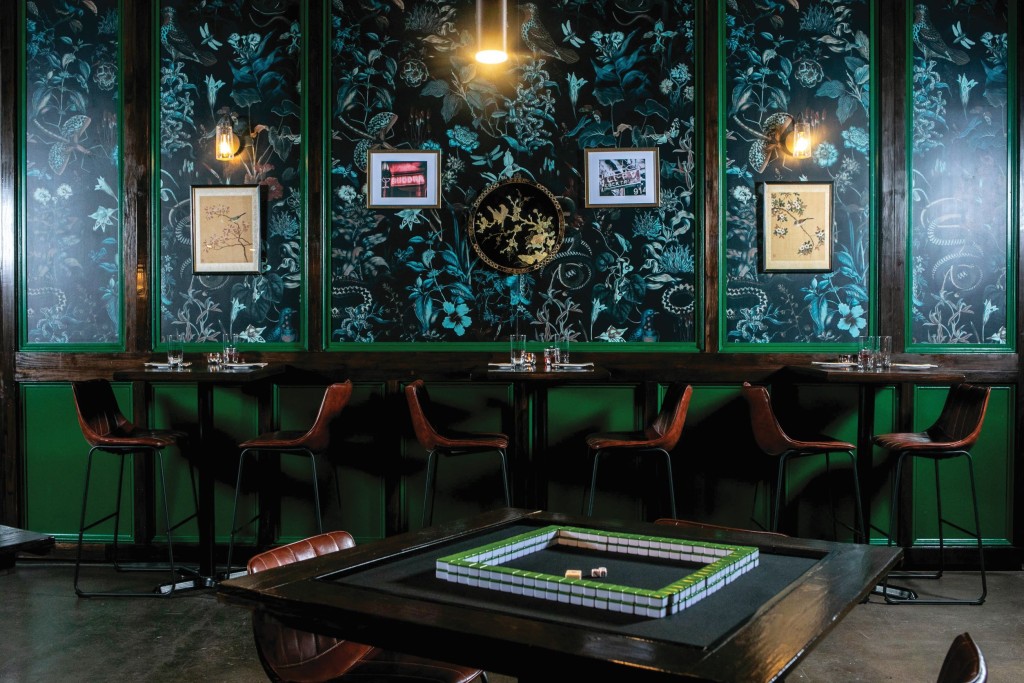 You’d never expect a nondescript side door near a breezeway in Westpost to lead to a speakeasy-style mahjong parlor. That’s part of the hip factor of Sparrow Room, which opened in January in the back room of Scott Chung’s Taiwanese gua bao eatery, Bun’d Up. Moody and intimate with botanical wallpaper and a dark wood bar, the one-room salon has tables that can be reserved for the tile-based strategy game that originated in 19th-century China. Don’t know how to play? Sign up for a beginner class on Wednesdays (chef Andrew Lo has taught mahjong for years). The tight but inventive menu includes a few dim sum favorites (think pork or shrimp dumplings) and tantalizing cocktails featuring Chinese flavors such as lychee, oolong and chrysanthemum. “A lot of the ingredients being used in the food are also being used in the drinks,” Chung says—like the bourbon-forward Red Dragon’s Tail, made with chilies, allspice and lime. Or, try the Five Spice Fortune Manhattan, which comes garnished with a bite of crispy pork belly. // 1201 S. Joyce St., Arlington (Pentagon City) 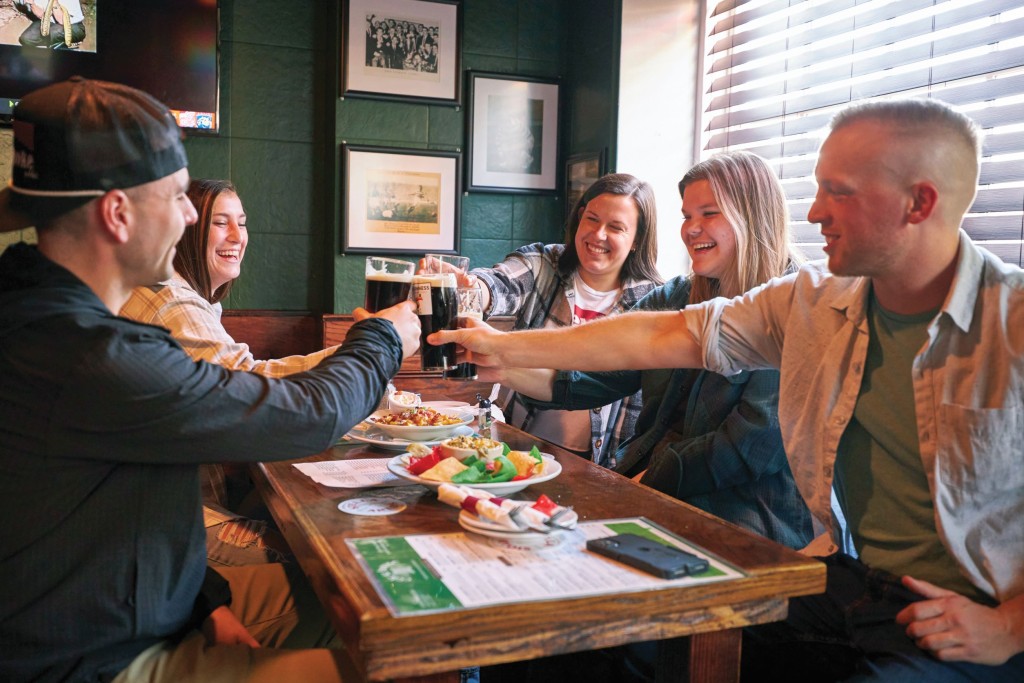 The vibe: Irish up with a pint (or three)

Michael McMahon knows how to pour a pint. Hailing from County Clare, Ireland, he moved to the U.S. in 1987 and spent 15 years working at The Dubliner on Capitol Hill before opening his own pub on Columbia Pike in 2014. The Celtic House has weathered Covid with a dedicated clan of regulars, including families and patrons of all ages who come not just for the ales, lagers and stouts, but also for the food menu. Irish classics like shepherd’s pie and beef stew are popular, as is the house-made corned beef and cabbage, served as an entrée or tucked into Reuben sandwiches and Irish “egg rolls.” Weekday happy hours find $6 pours of Guinness, Smithwick’s, Harp, Magners, Kilkenny and seasonal rotations. On weekends, settle in at the bar for a dram of whiskey and live music, or take in the fresh air anytime on the dog-friendly patio. // 2500 Columbia Pike, Arlington 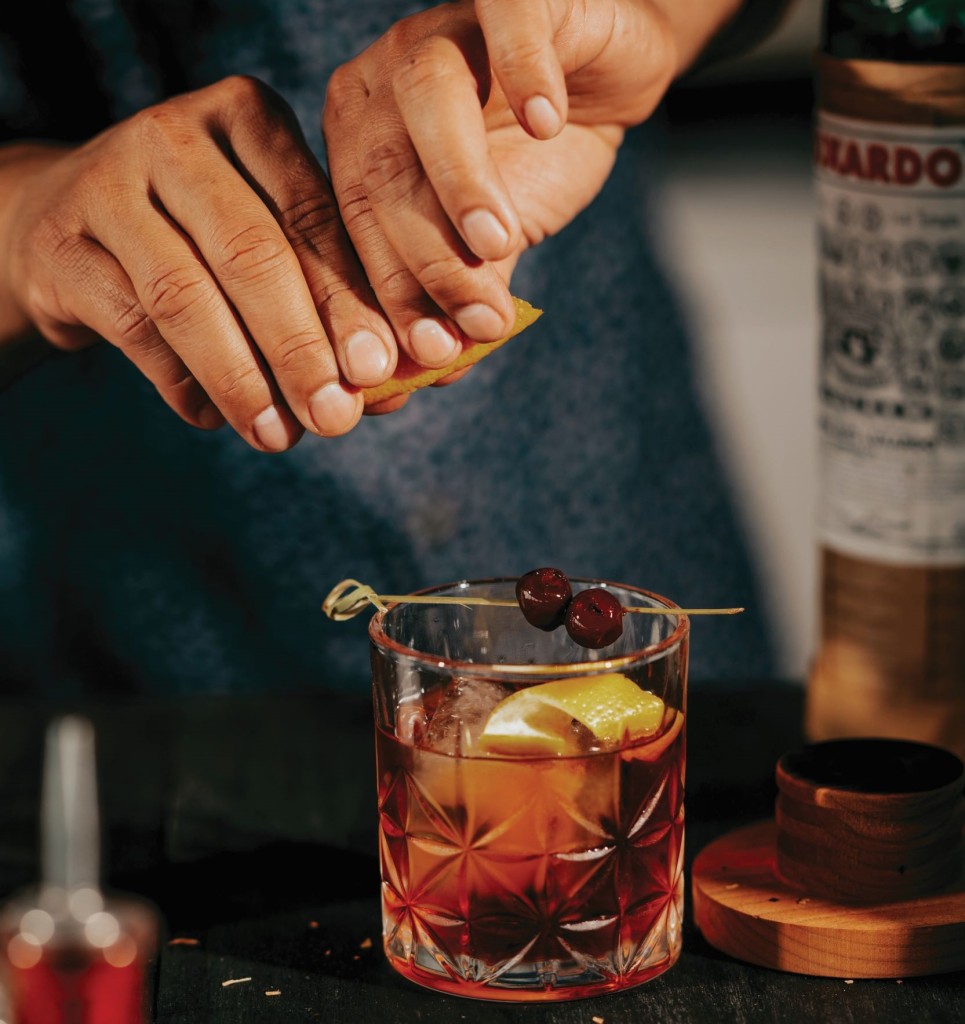 Ivan Iricanin’s trilevel Mexican hot spot in Clarendon recently unveiled a new look and reverted back to its original name, Buena Vida, retiring the TTT moniker along with the casual taqueria menu that carried it through the pandemic. “I just wanted to make a statement,” says the restaurateur, who also owns nearby Ambar. With the metamorphosis, the restaurant now serves an unlimited tasting menu from new chef Jaime Garciá Pelayo Bribiesca, a Mexico City native. Slated to open later this month, the reimagined rooftop lounge, designed by D.C.-based Core Architecture + Design, will be a statement in and of itself, meant to feel like a Tulum treehouse with two large bars surrounded by lush greenery. The fantastic skyline views will remain, but a revamped cocktail menu promises drinks that are both sweet and savory—like an Al Pastor Margarita featuring bacon and Serrano pepper-washed tequila and crushed pineapple. // 2900 Wilson Blvd., Arlington (Clarendon) 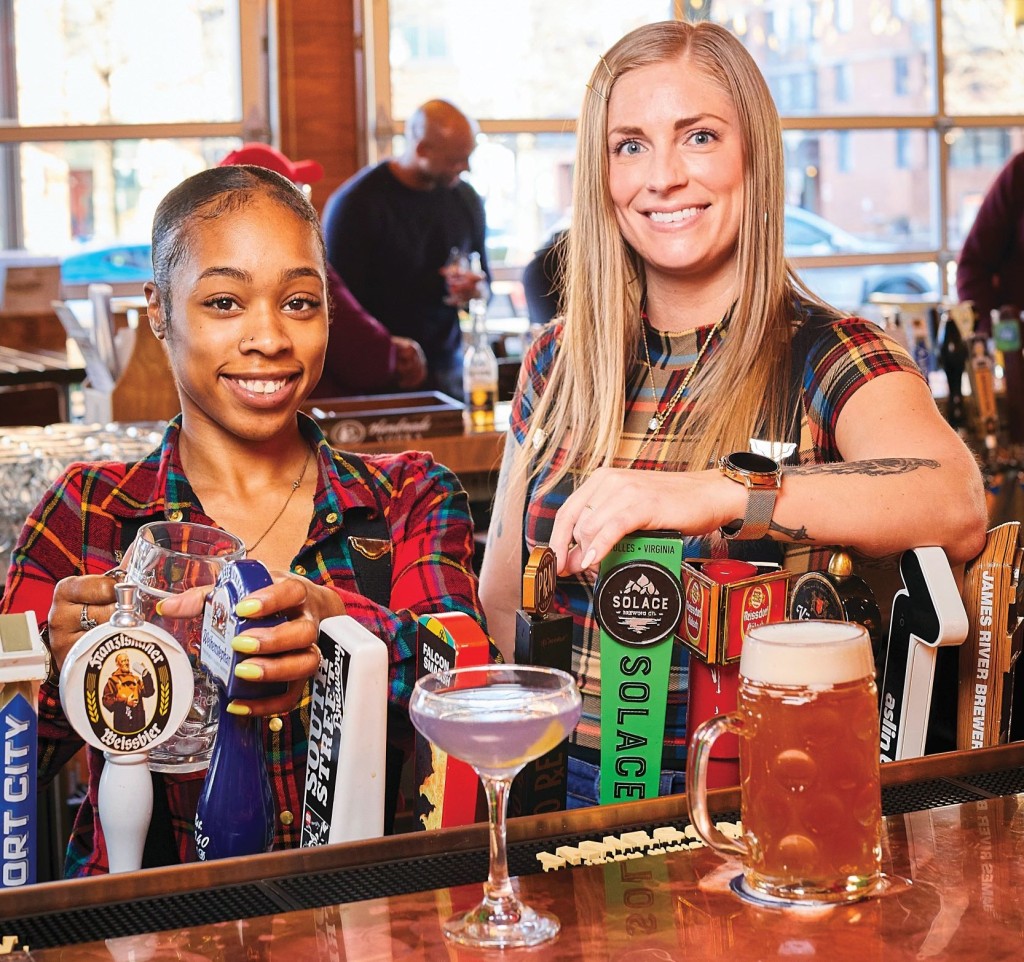 The vibe: Beers and brats 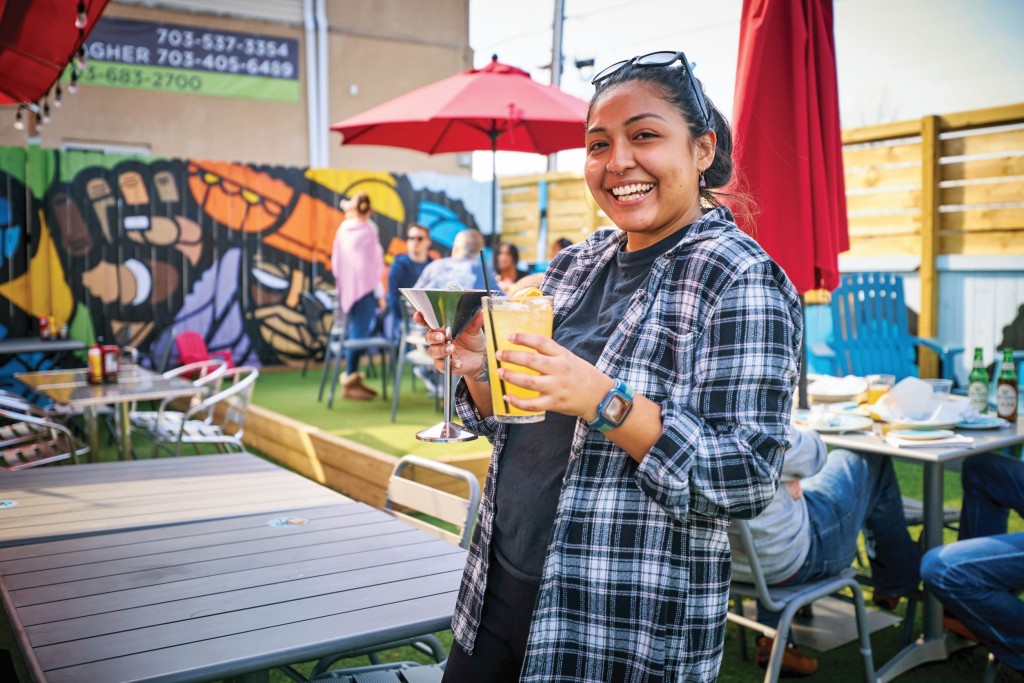 The vibe: Low-key and local

Yorktown High School alumni James and Mike Barnes, Michael Danner and Wes Clough have been making little improvements to this come-as-you-are bar on Langston Boulevard ever since they took ownership in 2011. Not to the interiors, mind you—which seem untouched by time, with décor that stretches back to the establishment’s 1991 incarnation as a Southwestern-themed biker bar. But the exterior has been transformed. During the pandemic, the foursome unveiled a vibrant mural by Arlington artist MasPaz hugging a family-friendly beer garden with umbrellas, TVs and even kiddo-size chairs. Neighbors arriving on foot can access the outdoor space through a handy cut-through in the fence without having to walk around the block. “We were like, let’s make everyone’s life easier,” says co-owner James Barnes. Fan favorites here include fresh-squeezed orange crushes and pickle-tinis featuring house-made pickles, plus rotating craft brews and Miller Lite on tap. Catch up with friends over a plate of house-made tater tots and the aptly named Nacho Mountain (or the Nacho Molehill for smaller appetites). // 4792 Langston Blvd., Arlington 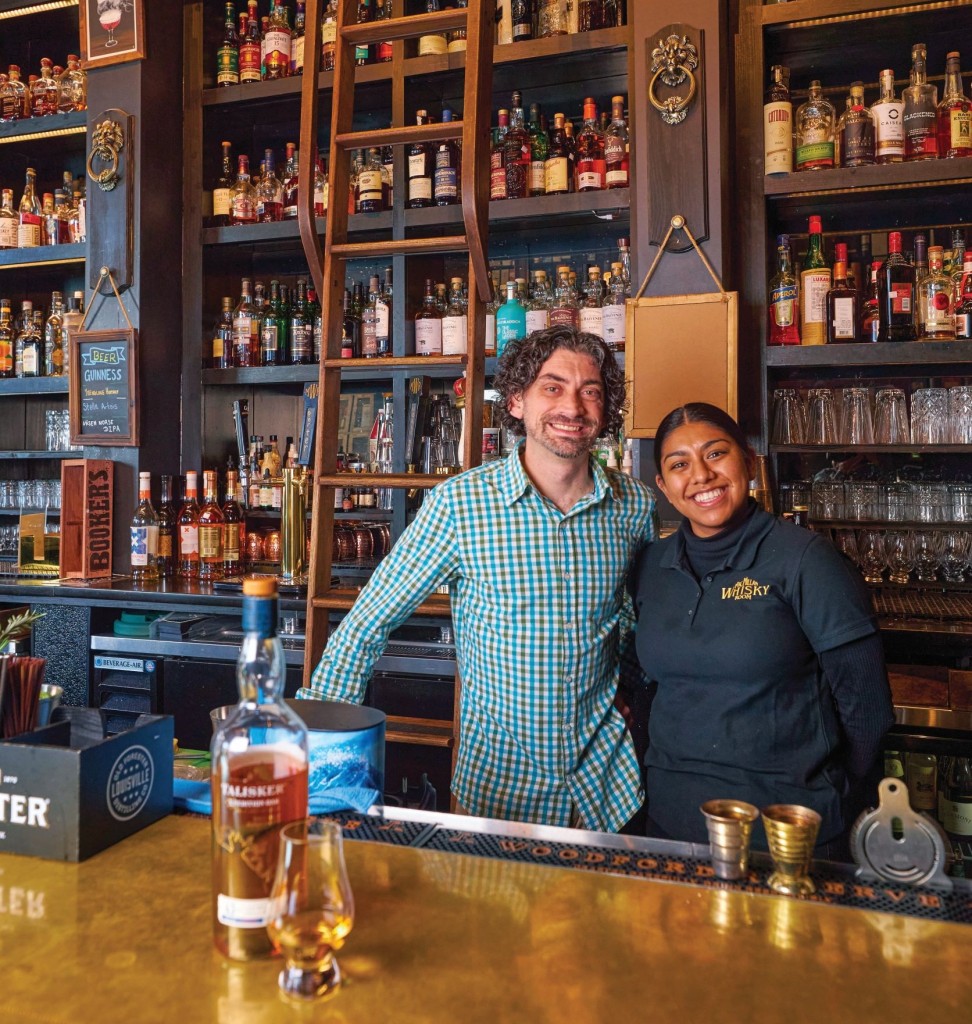 The vibe: A mecca for whiskey lovers

Let’s start by noting that this Mosaic District tavern needs a library ladder. Shelves of bottles stretch to the ceiling, with a selection of more than 500 whiskeys available, in addition to beer, wine and cocktails. “A lot of people say it’s like the Harry Potter whiskey room,” says proprietor Derek Anderson, who opened the bar with his wife, Emma Hand, in 2019 for enthusiasts who don’t want to drive into D.C. to go to a whiskey bar. Spirits aficionados can drop real cash here: One of the pub’s most expensive options is a 43-year-old Talisker single-malt scotch that goes for a whopping $400 an ounce. But newbies are just as welcome, and tasting flights can help patrons discover a new favorite. There’s food, too, including Scotch eggs, smoked Gouda mac ’n’ cheese and Guinness beef pot pie. // 2920 District Ave., Fairfax (Mosaic District) 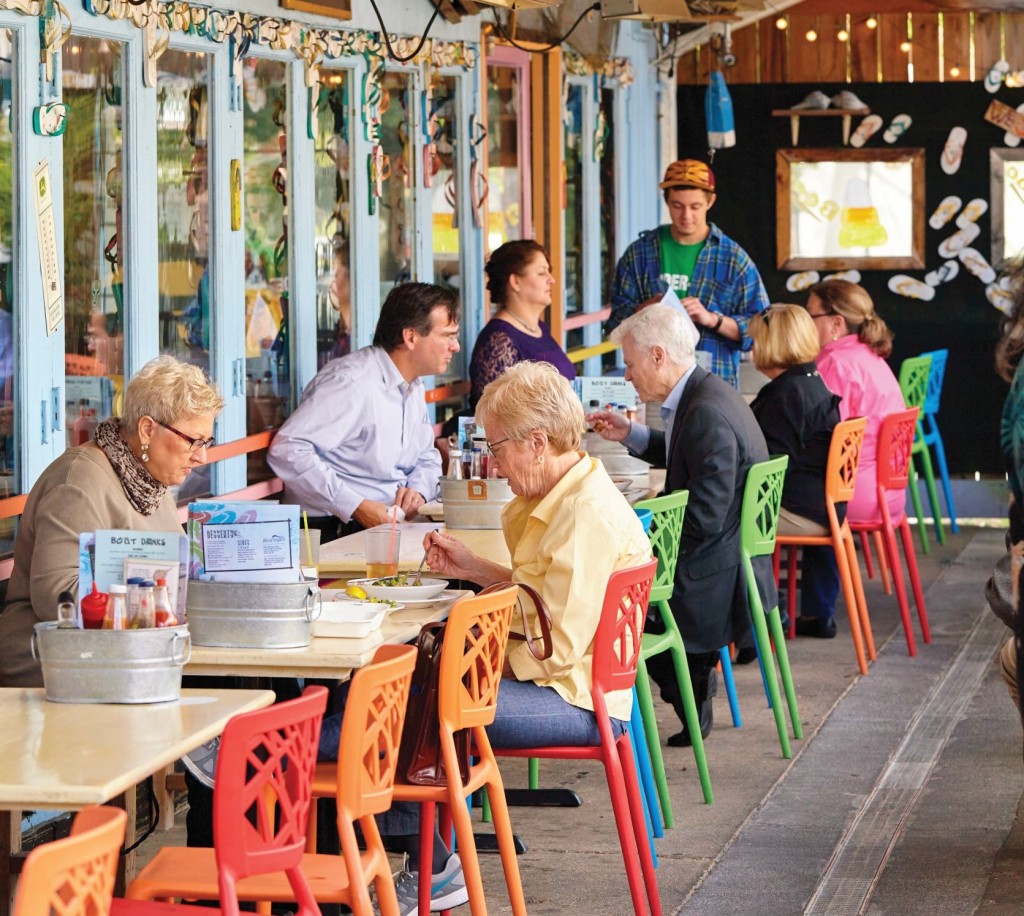 The vibe: Tunes and flip-flops

There are lots of places to see live music in the DMV, but not many where kids and parents can do so together. At Clare & Don’s, the music starts early, at 5:30 p.m.—well before bedtime—and the menu is kid-friendly, with options like quesadillas, corn dogs and homemade ice cream from sister restaurant Lazy Mike’s. “We’re a family restaurant,” explains David Tax, who has run the colorful cantina with his sister Rebecca for the past 17 years (first in Clarendon, hence the name, before they relocated to Falls Church City in 2007). “We mix a lot of margaritas, but our driving factor is to make a restaurant that’s accessible and really fun for all ages,” he says. Visiting and local musicians play on three stages—two outdoor, one indoor—with sounds ranging from reggae and pop to Grateful Dead covers or bluegrass. This spring and summer, the “redneck Florida” bar inspired by the Tax siblings’ youth in Gainesville aims to keep the patio rocking with live shows up to five times a week. Adults can sip frozen margs, pina coladas, and orange and grapefruit crushes made with Deep Eddy Vodka while the kids knock back virgin crushes or chocolate milk. // 130 N. Washington St., Falls Church 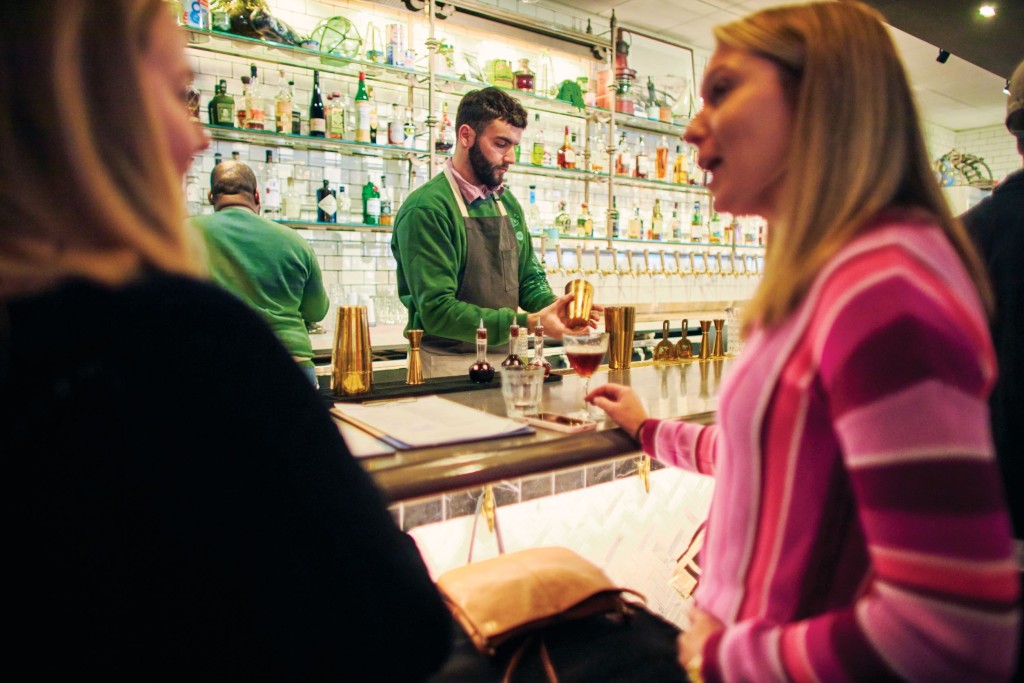 Salt Line beverage director Ben Park plans to switch up the batched cocktails seasonally at this Ballston newcomer, but one drink will always be on the list: the Cape Codder G&T, which blends Bombay gin with house-made cranberry tonic for a New England twist on the classic. “You get the best of both worlds,” Park says. Opened in October 2021, this offshoot of the Navy Yard flagship is bringing a shoreline feel to Ballston’s high-rises with seafood towers, lobster rolls, oyster shooters, chowder and stuffed clams.  (Read our dining critic’s review here.) With the arrival of warm weather, the bartenders will be serving up gargantuan Bloody Marys, spritzes and punch (try the Fish House Punch made with Brugal Añejo rum, Thrasher’s spiced rum, cognac, peach brandy, oleo, lemon and Assam tea) on a spacious, nautical-themed outdoor patio. The hefty beer list balances local players with excellent New England brews that you don’t often see in Northern Virginia, like suds from Vitamin Sea Brewing, Foam Brewers and Maine Beer Co. // 4040 Wilson Blvd., Arlington (Ballston) 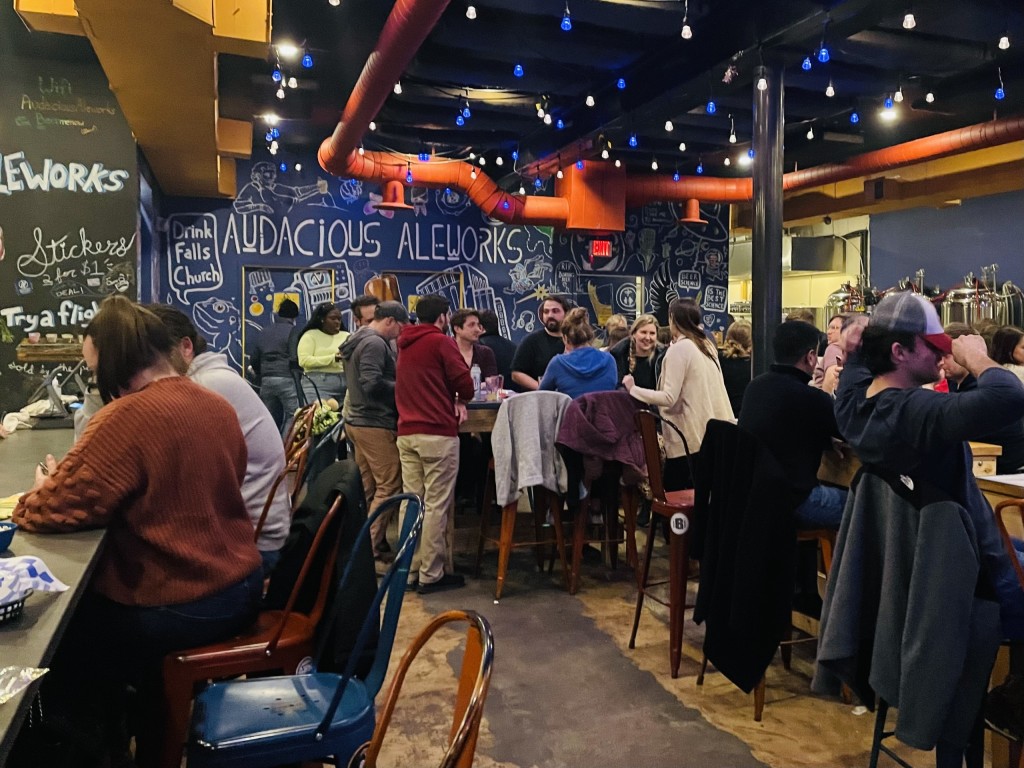 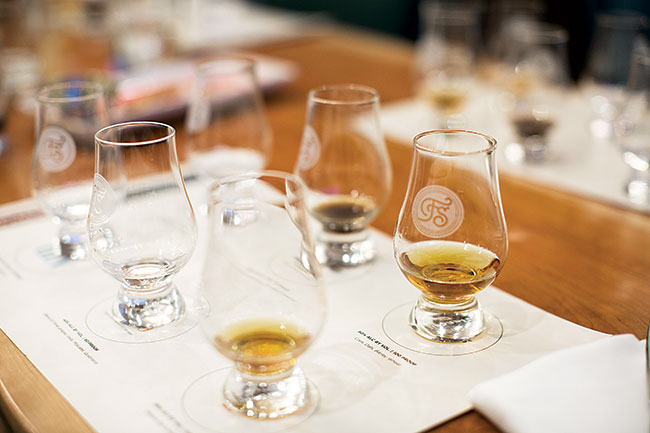 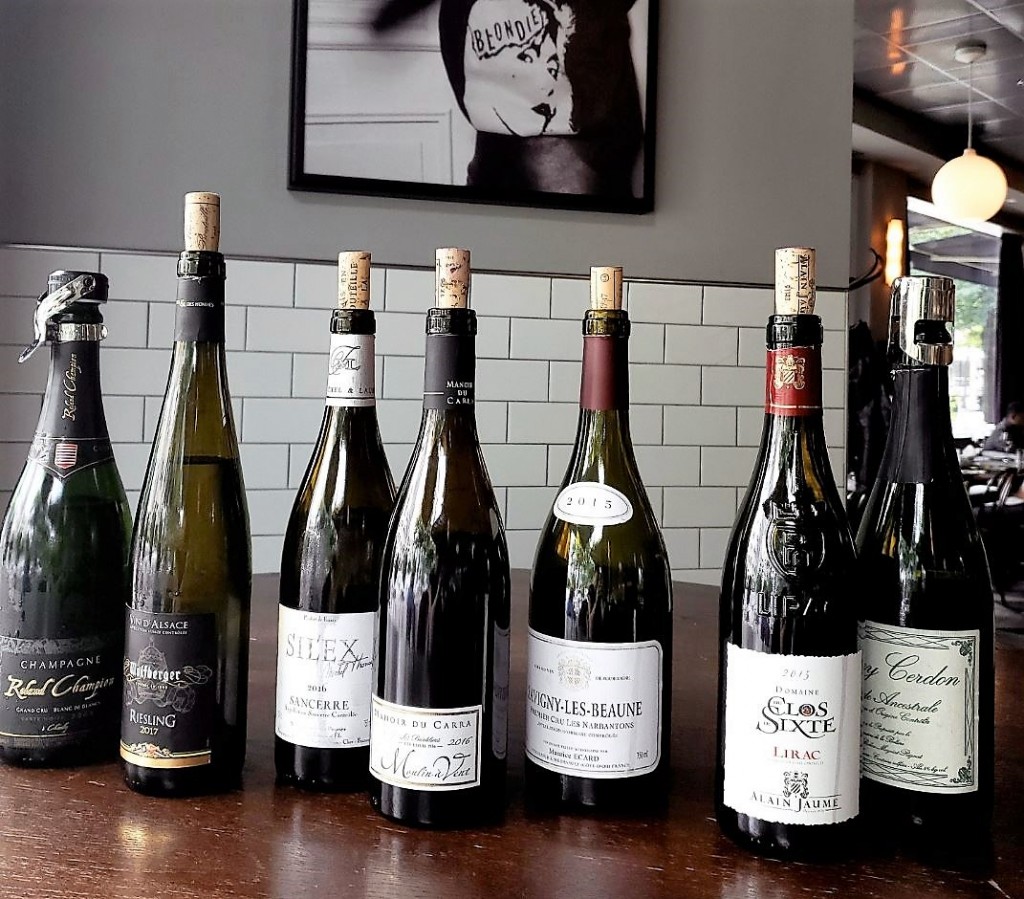