Best of Arlington 2021: Best of the Rest 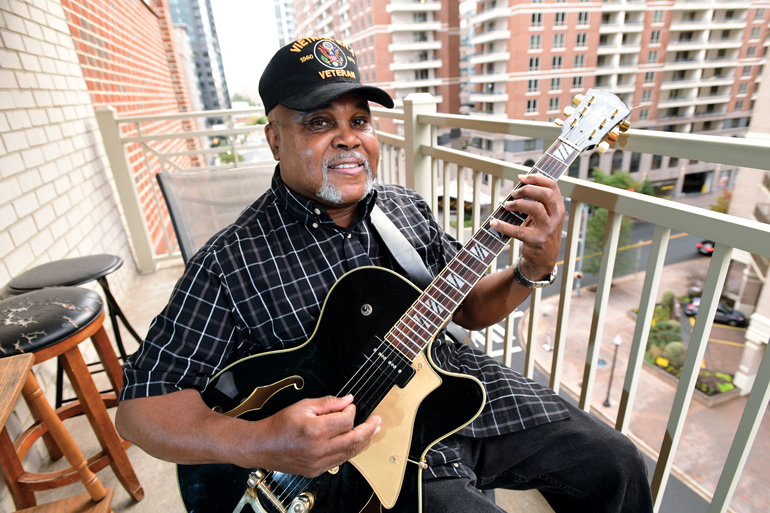 Could there be a more appropriate musical genre for our present circumstances than the blues? When Covid-19 arrived, guitarist Chester Chandler, who performs under the stage name Memphis Gold, took to his eighth-floor balcony in Ballston and began serenading his neighborhood with free weekend concerts. “It really brought my spirits up to see people on the sidewalk enjoying the music,” says the 65-year-old Navy veteran, who, in normal times, plays gigs at JV’s Restaurant and the annual Tinner Hill Music Festival when he’s not touring internationally. Each hourlong set in his five-month impromptu concert series began with the national anthem, then segued into “gutbucket” blues classics, plus a few of the Memphis-born artist’s own songs. People started making donations through his website, which Chandler and his wife, Barbara, have since shared with local nonprofits serving homeless and veteran populations. An Arlington resident since 2001, Chandler walks with a cane—the result of a 2008 tree-trimming accident in which he fell 30 feet and broke his back. Music, he says, is good medicine. “When I’m playing onstage, I have no pain.” –Jenny Sullivan 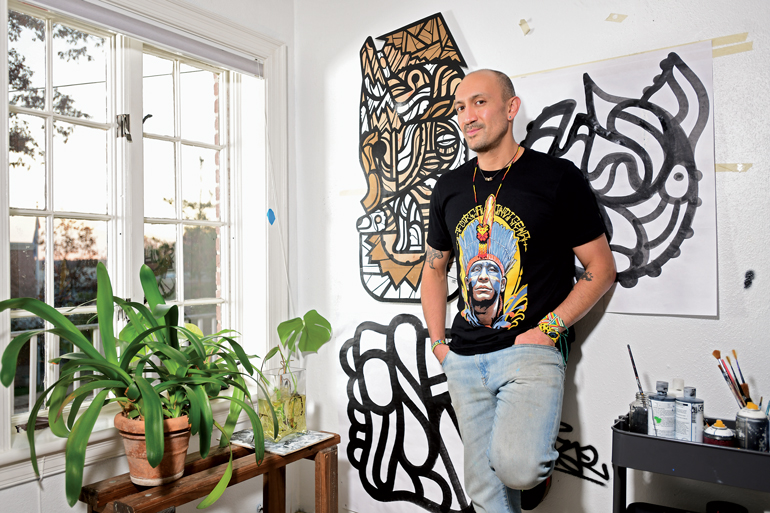 His name is Federico Frum, but in the art world the Colombia-born artist is known as MasPaz, which in Spanish translates as “more peace.” Common themes in his large-scale murals, which have electrified urban spaces in Arlington, D.C. and beyond, include nature, connectivity and the Hispanic diaspora. His latest local installation, “Community,” depicts a maternal figure holding the neighborhood in her arms and awaiting the arrival of a dove. (Painted on an exterior wall of Cowboy Cafe, it’s an outgrowth of this summer’s “Words to Art” project and anchors a place-making initiative of the Lee Highway Alliance.) Though his talents are in considerable demand—his portfolio includes household names such as Nike, National Geographic, the Sierra Club, the Smithsonian and the New Museum in New York City—the Arlington Ridge resident and H-B Woodlawn graduate maintains a soft spot for his hometown and is dedicated to making it more beautiful. In 2019, he collaborated with fifth-graders at Hoffman-Boston Elementary School to design and paint a legacy mural along one of the school’s hallways, featuring plants and animals indigenous to the local ecosystem. During the pandemic, he began offering a series of free online art workshops, encouraging art as an outlet for mental health. –Jenny Sullivan 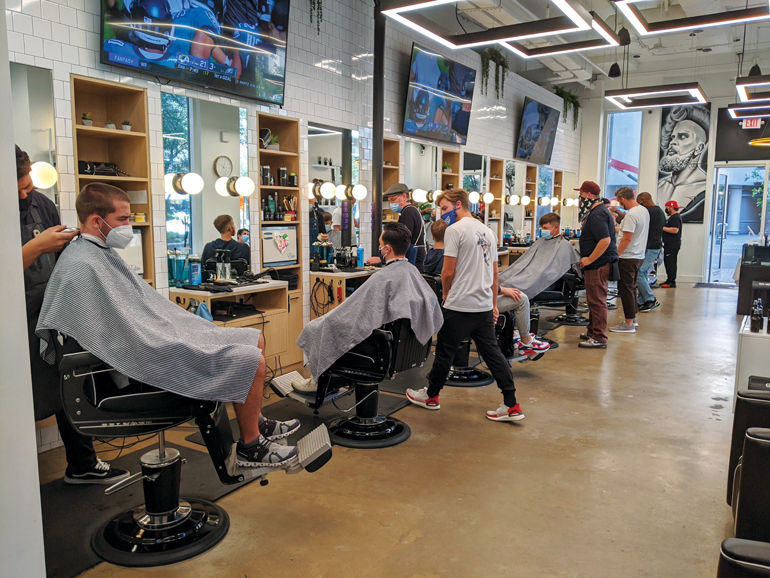 The idea for Bearded Goat came during—what else?—a haircut. Eric Renfro was giving entrepreneur Scott Parker (co-owner of Barley Mac, Bronson Bierhall and other local ventures) a trim when “casual conversation turned into brainstorming.” The plan took time to grow, but in March 2019, Renfro, Parker and fellow barber Jon Dodson opened their salon for gents in Ballston. Like so many other local businesses, it took an unexpected hiatus during the shutdown this spring, but reopened in May with heightened safety protocols and a steady stream of clients booking appointments for cuts and a little armchair therapy. “You get to be part of people’s lives,” Renfro says of his chosen profession. “First dates, job interviews, weddings, graduations. You share these intimate moments.” –Matt Blitz 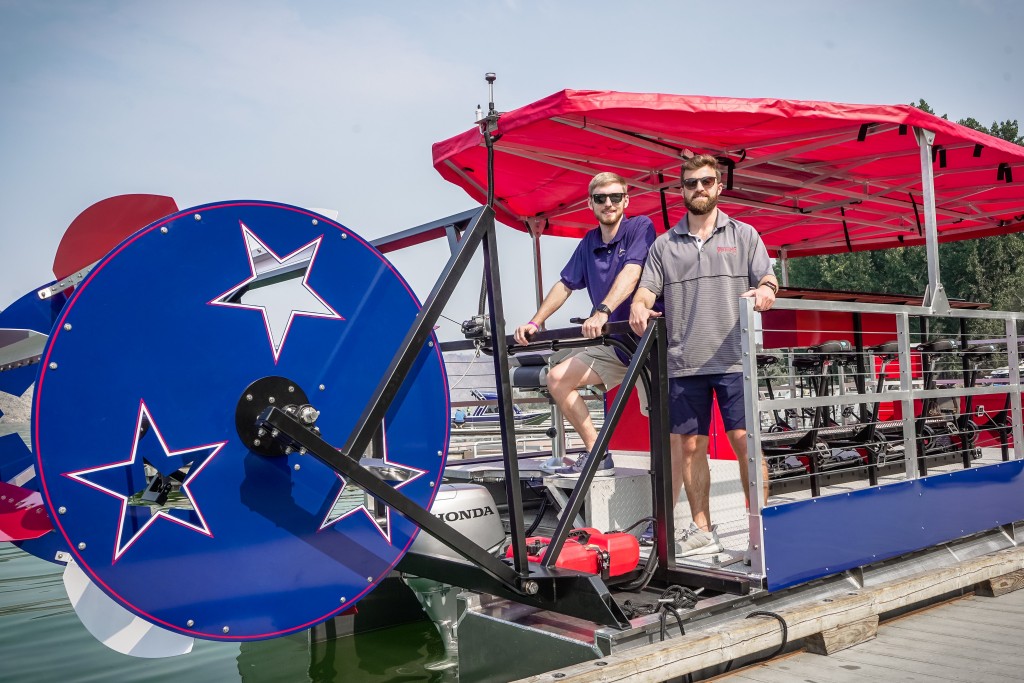 Arlington natives Jack Maher and Jack Walten have been best friends since preschool. Now they own and run two party-boat-meets-spin-class pontoons called Cycleboats. Upon boarding, passengers mount the 10 bicycle seats that face a mahogany bar and pedal (thus contributing to the boat’s propulsion) while enjoying BYO food and drink. Granted, the pedalers aren’t doing all the work. A paddlewheel in the back also helps move the eco-friendly vessel down the Potomac. Each boat can hold up to 16 people—12 during the pandemic—and has a lounge area at the front for a lazier view of D.C.’s iconic monuments during the 90-minute cruise. In recent months, the pontoons offered a fun outing that was Covid-safety-friendly. “We are such a good alternative to going to bars,” Walten says. “With the whole open-air layout, we can space people properly.”
–Stephanie Kanowitz 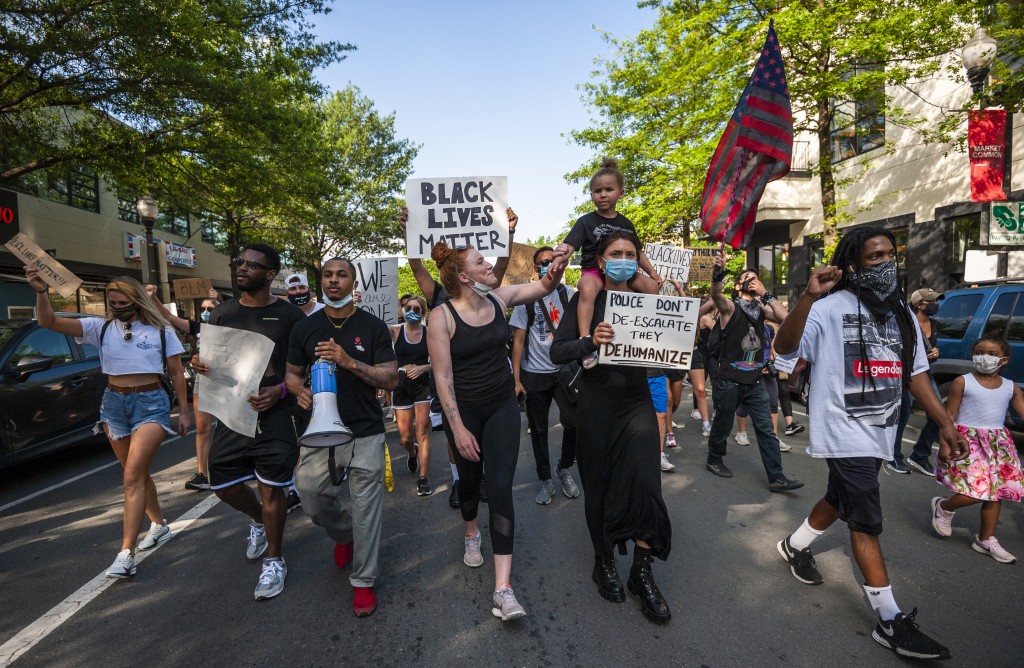 George Floyd’s murder prompted thousands of local residents to mask up and march against systemic racism and police brutality. But that moment in late May was neither the beginning nor the end of Arlington’s awakening to racial injustice. Many local advocacy groups remain actively engaged in facilitating tough conversations about race and critiquing broken systems, including the Arlington Branch of the NAACP, the nation’s oldest and largest civil rights organization; Challenging Racism, a workshop program that helps participants develop a deeper and broader understanding of racism and its effects on our society; Black Parents of Arlington, which provides advocacy and a safe space for Black parents; Arlington for Justice, a citizens’ group pushing for criminal justice reform; and the Leadership Center for Excellence DMV Diversity & Inclusion Institute, a training program that dissects dynamics surrounding race, gender, sexual orientation, political affiliation and other factors in the workplace. In November, Arlington County adopted a restorative justice plan that establishes a framework for school and legal reform. These efforts will surely continue to gain momentum as the community strives to build a more equitable future for all. –Jenny Sullivan