Bring a Food Truck to Your Neighborhood

What's for dinner? From poke bowls and Peruvian sandwiches to fresh-baked cookies, the options are plentiful. 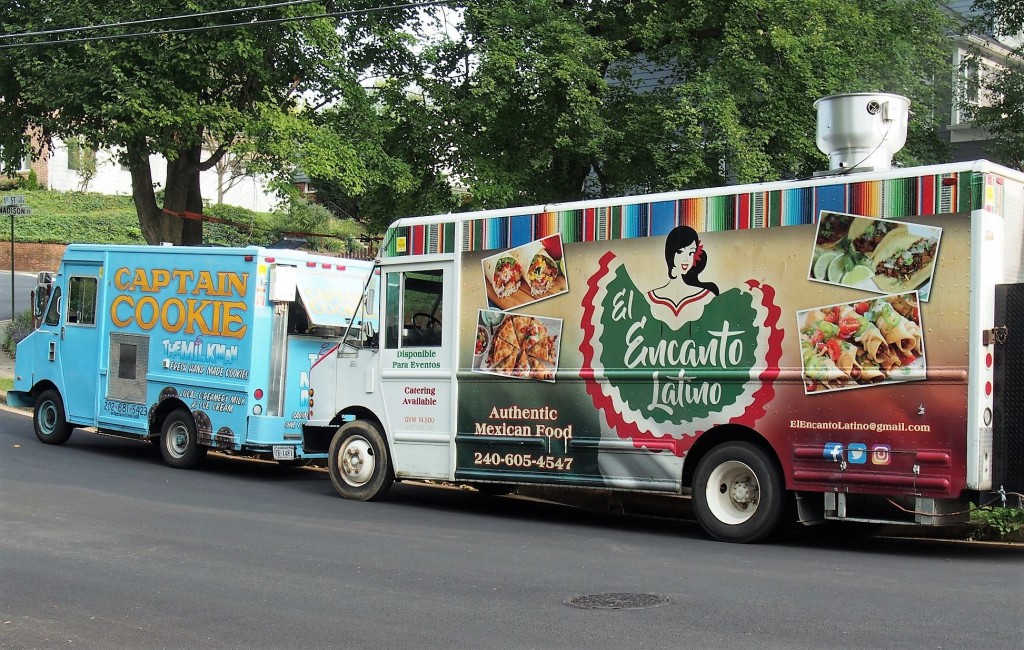 One day last April, with quarantine in full swing, Danielle Quarles decided it was time to add some spice to her family’s mealtimes. “I was really tired of eating my own cooking, and I thought there had to be an easier way to do carryout,” says the Boulevard Manor resident. Especially after a restaurant takeout meal proved to be an overpriced disappointment. Some dishes just don’t hold up well in transit.

Then she thought of food trucks, those tiny restaurants-on-wheels that had routinely lined the streets of commercial corridors during the office lunch rush, pre-pandemic. Would trucks that were now idle be willing to come to her decidedly suburban neighborhood for dinner instead?

The answer—at least at first—was no. “I had to talk the first couple of trucks into coming!” Quarles remembers.

Some chefs just didn’t anticipate enough volume in a neighborhood of 500 households, preferring to focus on high-density apartments or condo developments. They were reluctant to do dinner; their businesses had always revolved around lunch. They resisted the idea of scheduling dates a month or so in advance, wanting to keep their calendars looser in such uncertain times.

Finally, though, a few trucks agreed to give Boulevard Manor a try. As with everything in quarantine, there were learning curves and adjustments. Operators accustomed to dealing with a handful of individual orders during lunch suddenly found themselves prepping for an onslaught of large orders for families—who all wanted to eat dinner at 5:30. “It was a bit of a disaster at first,” admits Quarles, whose day job is overseeing clinical trials for cancer treatments.

But the logistics were soon smoothed out, and neighbors quickly warmed to the notion of giving their kitchens a rest. Quarles began booking trucks on Tuesdays and Fridays, posting details and updates on the 800-member BMCA Food Truck Fans Facebook page so hungry residents could plan accordingly. Trucks started taking pre-orders to better manage the dinner time rush. Some began offering family-size meals.

Though the offerings and the types of cuisine varied from one week to the next, neighbors learned that they could always find trucks in the same spot, on North Madison Street just off Route 50, lined up 6 feet apart, thanks to cones and chalk markings on the sidewalk. 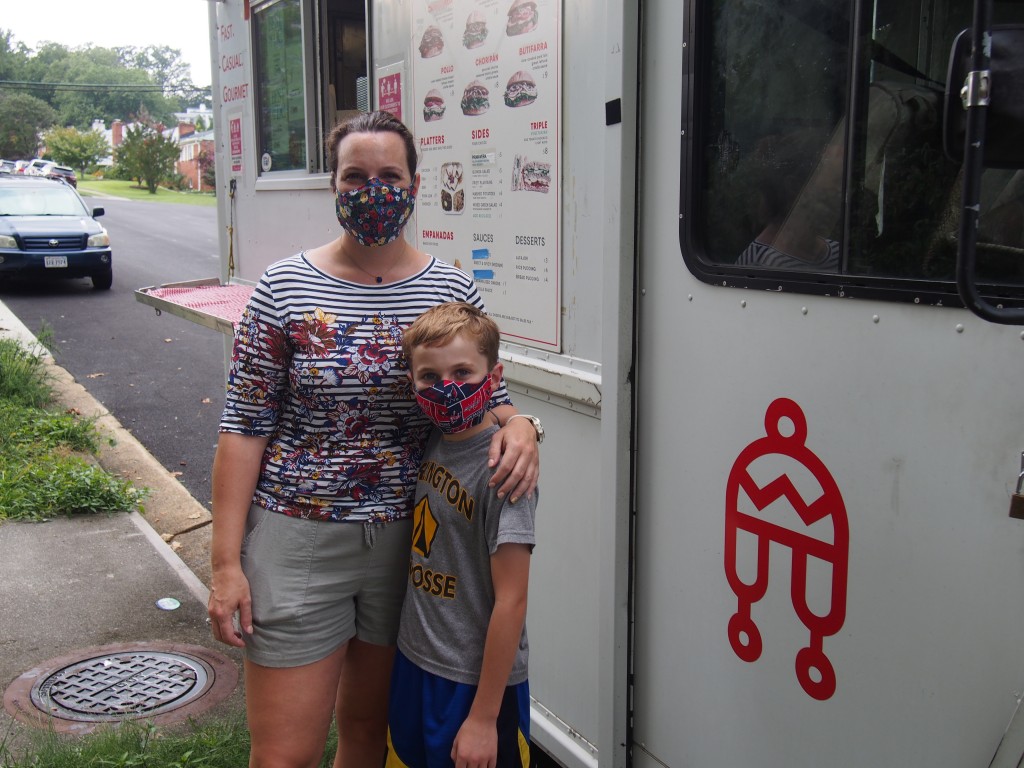 As the initiative grew, so did the enthusiasm surrounding it.  “You’re offering me a chance to pick up food in a safe way and support a local business? Sign me up!” says Chako Morgan of Lee Heights, who grew up in Hawaii and couldn’t wait to try Mana, the Hawaiian food truck that came one week.

“I just thought it was a gift from heaven,” says Mary Dodson, who lives in Boulevard Manor with her daughters and two granddaughters. “I was so tired of cooking and thinking up things to eat.”

Boulevard Manor wasn’t the only neighborhood where roving kitchens charted new territory over the summer.

At West Village of Shirlington, Heather Lilly was elated when her condo complex announced that it would be hosting food trucks. “It’s been a huge hit,” says Lilly. “It just gives us something to look forward to. We’re living in a really weird time, and by the time you get to dinner, it’s helpful to have the option of a food truck every so often.”

Lilly appreciated the option so much that when management stopped scheduling the trucks, she offered to take over with help from a neighbor. “I’m an event planner at heart, so planning and organizing things comes naturally to me,” she says.

Both Lilly and Quarles see the arrangements as win-win. The truck visits are a respite for tired, hungry, stressed home cooks who need a night off,  and they support small businesses, many of them owned by women, minorities or immigrants, in a challenging economy. With business down by half or even more, according to a July Washington Post article, even veteran food truck operators are suffering.

“When everything stopped in March, I stopped the truck, and I didn’t know what to do,” admits Guillermina Alvarez Vincente, owner of Arlington-based El Encanto Latino, a truck that serves Mexican tacos on housemade tortillas. Then she started getting calls from customers, many of them construction workers, who asked her to return, saying they had nowhere to eat near their job sites. She restarted the truck to serve her regulars, and before long was adding stops at apartments, condos and neighborhoods like Boulevard Manor. “We protect ourselves, and off we go,” she says through her mask. 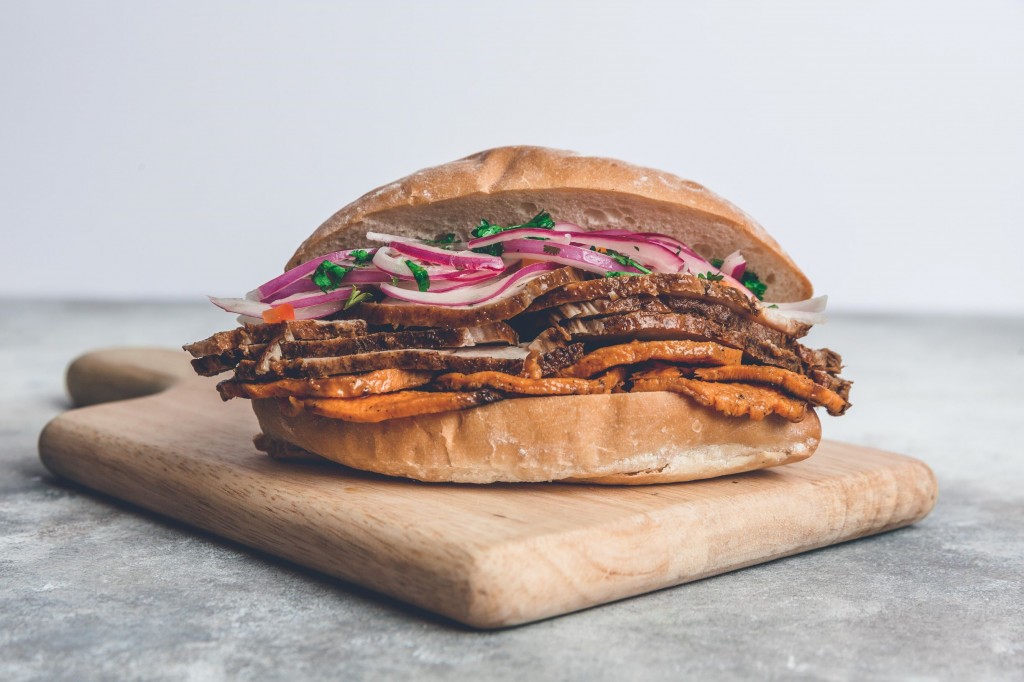 As trucks have moved from office to residential locations, many operators say they have rediscovered old friends on neighborhood stops. “We used to go to Rosslyn, and we’ve definitely seen some repeat customers and made some new ones as well,” says Giuseppe Lanzone, COO of Peruvian Brothers, which he co-owns with his brother Mario. Their specialty? Peruvian sandwiches on fresh-baked bread, with fillings like pork tenderloin and sweet potato with chorizo and salsa criolla.

For housebound residents who are taking social distancing seriously, the food truck visits have offered a rare chance to connect with others during the pandemic.

“Of course, we can’t gather,” says Boulevard Manor resident Dodson, “but you’ll see a friend and catch up with them across the street or people will walk by your house” on their way to the food trucks.

Her neighbor Rob Kinder agrees. “For some neighbors, it’s been the only chance to see them during the last six months,” he says.

As for the next six months? The trajectory of Covid-19 remains hard to predict, but Quarles knows at least one thing: food trucks will continue to feed the hungry people of Boulevard Manor.

“As long as the trucks are running and it doesn’t take an outrageous amount of time, I’ll keep doing it,” she says.  They’ve been good for the belly, the local economy and the soul.

How to Bring a Food Truck to Your Community

Want to host a food truck on your street? Here’s what you need to know, according to Danielle Quarles, who organizes twice-weekly food truck stops in her neighborhood.

Check social media. Many food trucks use Twitter, Instagram and Facebook to share their schedules and promote their menus. You’ll often find contact info there and can book the trucks directly. “I do not use a service to find/book trucks because they charge the trucks a booking fee,” says Quarles.

Set aside little bits of time. Quarles says scheduling trucks for her neighborhood “takes 3 to 4 hours a month to organize, mostly in 10-minute to 15-minute blocks. Typically, the trucks return messages quickly, and scheduling is not difficult,” she says, but it helps to follow up with trucks before their planned visits and confirm ordering instructions. Some trucks allow families to pre-order.

Choose dinner over lunch. While most food trucks relied on lunch business from office workers before the pandemic, dinnertime seems to be a bigger draw for residential areas.  It’s an easier time for families to break from distance learning and work schedules, according to organizers.

Establish a routine. Quarles books trucks about a month in advance, scheduling visits for Tuesdays and Fridays.  She shares that schedule, along with ordering instructions and reminders, on her community association’s Facebook page, Nextdoor and a neighborhood email list.

Save room for the trucks to park. Quarles directs the trucks to street parking that isn’t directly in front of anyone’s home. Lilly, with property management’s assistance, reserves four spaces in her community’s parking lot. 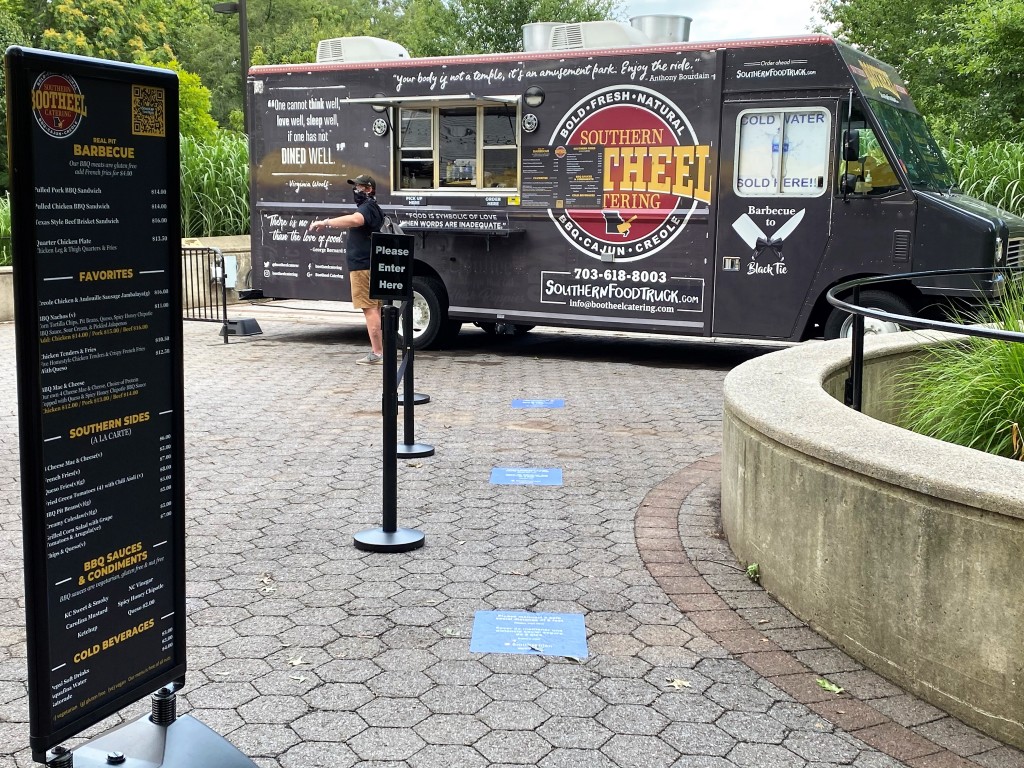 Below is a list of just some of the food trucks that are making rounds in Northern Virginia. Follow them on social media to track their whereabouts, or reach out directly if you’re interested in inviting them to your street.