Tysons Has a New Performing Arts Venue With a Sky Park 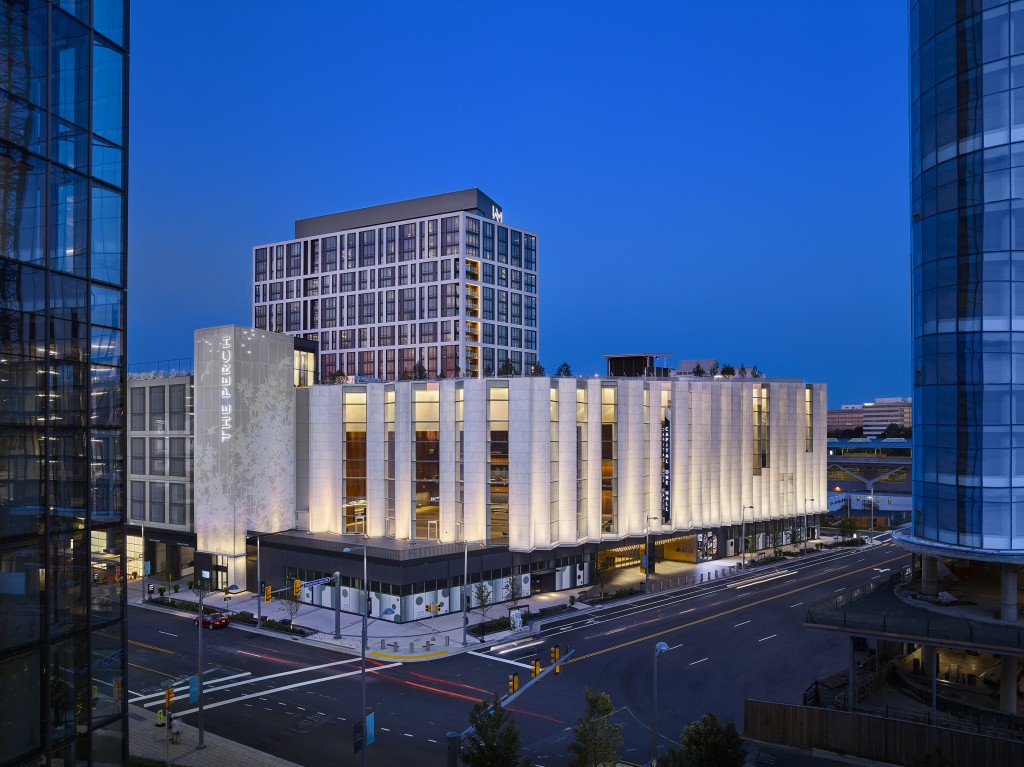 The new Capital One Hall in Tysons. Photo by Alan Karchmer, courtesy of HGA

Capital One Hall, which opens to the public Oct. 1 with a performance from pop-meets-opera star Josh Groban, is poised to fill a couple of voids in Tysons.

“This project fulfills two of what I think of as gaping holes in Tysons’ aspirations to become a great American city,” says project manager Scott Cryer of the architecture and design firm HGA. “One is a cultural arts destination, which now we have. And another is a really wonderful public space.”

Marked by a striking, accordion-like, marble-and-glass facade, the 125,000-square-foot performance venue includes a 1,600-seat proscenium stage, a 225-seat black-box theater and a rooftop amphitheater. It’s a significant cultural addition to a bustling business district that until now was known more for its shopping and suits than the arts.

While some parts of the sparkling new facility will be used for corporate gatherings and private events, concerts and theater performances are a priority. 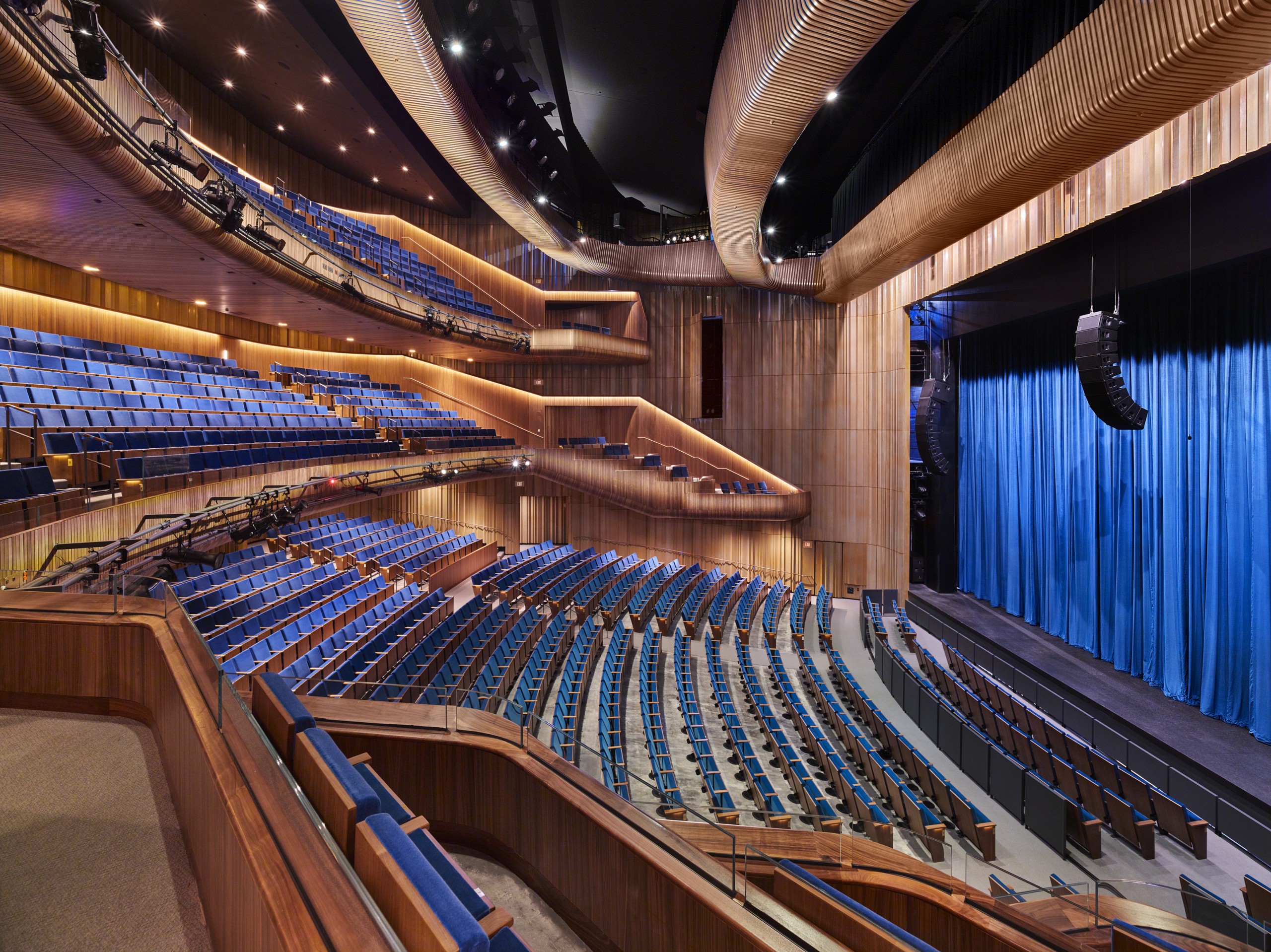 Capital One Hall’s Main Theater seats 1,600, with unobstructed views on all three tiers. Photo by Alan Karchmer, courtesy of HGA

The hall’s premier stage, appropriately called the Main Theater, hosts its first artists—Groban and country quartet Little Big Town—this weekend, and has dozens of national acts and Broadway touring groups waiting in the wings. At 1,600 seats, its capacity falls somewhere between The Birchmere and nearby Wolf Trap, offering a sort-of-spacious intimacy. It’s relatively easy to see who’s onstage regardless of where you’re sitting, thanks to three tiers of “vertically integrated” seats.

“There’s really no bad seat in the house,” says Meghan Trossen, marketing manager for the larger Capital One Center development.

The building’s 225-seat black-box theater, known as The Vault, will host smaller events, such an upcoming film screening as part of the Washington West Film Festival.

Built to entertain, Capital One Hall also sports five bars and a rooftop beer garden serving brews, cocktails and selections from Virginia’s Barboursville Vineyards. Executive chef Linton Romero (a veteran of Michelin-starred restaurants in Laguiole, France, Napa Valley and New York) says he plans to incorporate the vibe of visiting performers into his menu. During Little Big Town’s shows this weekend, for example, he’ll be serving up barbecue from Lorton-based Muggerz BBQ as a nod to the band’s southern roots.

Sitting atop Capital One Hall, The Perch features an outdoor amphitheater, bocce courts and a beer garden. Photo courtesy of Capital One Center

Topping the entire complex is The Perch, a 2.5-acre rooftop “sky park”—featuring an amphitheater, lawn games, a dog park and Starr Hill Biergarten—that welcomed an estimated 10,000 people over the span of three days at its grand opening earlier this month. Beside a bocce court and lifesize chess game sits a 230-person-capacity lawn, where local and regional bands play several shows each week. The sprawling green space with 11th floor views is also a public park, with mini golf, a sculpture garden and food trucks (to be hoisted by crane) slated to open this spring.

Starr Hill Biergarten’s general manager, Brian Griffin, is a former GM of Whitlow’s in Clarendon, which closed this summer.

In addition to hosting nationally acclaimed artists, Capital One Hall is partnering with ArtsFairfax and will commit at least 15% of its performance slots to Fairfax County-based nonprofits, offering at-cost rates for use of the space and pro bono services.

“We’re hopeful that this can help grow and cultivate the arts, like homegrown local arts,” Trossen says.

The hall has been in the works for about five years and is in line with Fairfax County’s plan to make Tysons its “downtown” by 2050. Though parking options are available nearby, Capital One Center is just steps from the McLean Metro stop. That degree of walkability, Trossen says, is part of planning for the “Tysons of tomorrow.”

Capital One Hall opens to the public on Oct. 1. with a performance by Josh Groban at 8 p.m. Tickets start at $89. All guests must wear a mask and provide proof of full vaccination (the last dose of which must be administered at least 14 days prior to admittance) or a negative Covid-19 test approved by the CDC taken no more than 48 hours before entering.