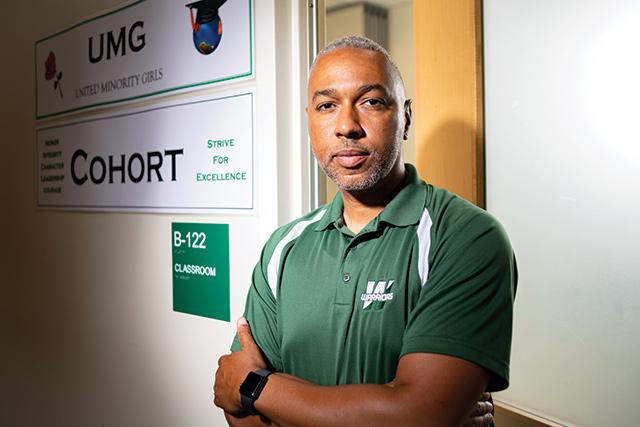 Wakefield High School’s Tim Cotman is one of those equity coordinators. He still remembers the African American literature class he took in college and the Black professor who taught it.

“All of a sudden, I could see myself in the curriculum and picture my family having those conversations,” Cotman says. “It gave me confidence and a sense of belonging. My role as equity and excellence coordinator is to help students feel the same way.”

He does this, in part, through Cohort, a Wakefield program for male students of color that has a sister program, United Minority Girls, or UMG. “In Cohort, boys meet weekly for lunch and talk about classes and summer opportunities,” Cotman says. “They do overnight college tours in the fall and spring, and graduate with an advanced diploma. It feels like a brotherhood—upperclassmen share advice with younger students and alumni come back and speak to current students.”

Ideally, he says, programs like this would be available to kids in all schools and at all academic levels. “The successes of Cohort and UMG are great, but what else can we do so we don’t need mitigative work? What are all the things we need to think about to engage with all stakeholders?”

Cotman also co-chairs Wakefield’s Equity Team, part of a systemwide initiative APS launched in the fall of 2020 that brings students, staff and families together at each school to talk about the impact of race on their lives, both in and outside of school.

“Looking at disparities by race, if we say that parents of color don’t care about education as much as white parents, we create a story that makes the data make sense—instead of understanding what’s happening in the system that’s creating the data,” he says. “APS has a good reputation, so when something goes wrong with students we tend to think it’s the families, not the system.”

The reality, Cotman says, is more complex. “The individuals within the system are the system. It’s not separate from us. Our level of awareness, our skills, our biases tie into the system. It’s important to reflect on our biases and experiences, on all the things that impact the decisions we make and actions we take. If you’re absorbing messages from society that tell you that men of color are dangerous or unruly, then you may not even be aware of how it impacts the way you respond to boys of color acting a certain way.”

Racial justice was top of mind for Gabby Allen when APS formalized its Equity Teams network last fall. “The events of summer 2020 left me feeling helpless and overwhelmed,” says the special education teacher at Campbell Elementary, referencing the nationwide protests that erupted after George Floyd’s murder. “So I got a group of teachers together to talk about current events and be a support system for each other.”

When the 2020-21 school year began, Allen’s informal group became Campbell’s Equity Team. They invited kids, parents and teachers from each grade level to join. Not only does the group now offer a safe space for conversations about race, but also Allen says it’s helped further the school’s expeditionary learning goals. The Equity Team has helped Campbell classroom teachers create age-appropriate lesson plans that prompt kids of all races and ethnicities to explore their identities, and even analyze data through an equity lens.

“It’s been great to see kids engaging in conversations about identity and diversity, discussing what to say when someone doesn’t agree with you, talking about the difference between fact and opinion,” says Allen, who is Black. “At a time when I felt very out of control, it helped me feel like I had a purpose.”

Veteran teacher Deitra Pulliam and math interventionist Katherine Garcia-Larner had a similar groundwork in place when they established the Equity Team at Hoffman-Boston Elementary. As a precursor, the duo organized a workshop for the entire school community, from students and families to custodians and administrators.

“We asked people, What is a stereotype, and where do they come from? We worked to build trust in our community and underscored the importance of staying open-minded,” says Garcia-Larner, who is Latina. “Then we started asking ourselves questions like, Who is benefiting from this lesson? Who is being marginalized? We looked at our school’s data to help us identify what we need, but also to be accountable to ourselves. There’s no finger-pointing or blame—only moving forward to support our students and families.”

Now they’re on a mission to amplify every voice. “Hoffman-Boston is a school of great diversity, but we also want to become a school where people can have conversations about what makes us unique, different, special,” says Pulliam, who is Black. “We had to learn how to listen to our students, to let them tell their stories. We haven’t always had that in our county. We need to look within our own communities and our own buildings. We are starting to unpack the conversations and questions that the families in our communities are having.”

Schools can’t close the opportunity gap on their own. They need buy-in from families, including the white parents who exert considerable influence on school policy and spending priorities.

“The American Dream is the myth we all internalize,” says Emily Vincent, founder of the discussion group Facing Race in Arlington, which has more than 700 Facebook followers.

“The belief that everyone starts from the same place and has the same chance to succeed—it’s just not true,” says Vincent, a mom of three whose children attended Randolph Elementary before their family’s move to Colorado this summer. “There are disparities in how easy it is for different groups of people to attain what they set out to attain. That’s the opportunity gap. Those disparities are caused by things that are out of people’s control—it has nothing to do with how hard they work or their characteristics. It has to do with the structures they work within and the people who perpetuate the norm.”

Vincent founded Facing Race in Arlington in 2017 after noticing that her Black friends’ experiences with the school system were often different from her own white family’s experiences. “It’s so much harder for people with privilege to see and understand the barriers that people without privilege face. The system is created in such a way that it’s easy not to see privilege or realize how unfair it is.”

She cites white parents’ “scarcity mentality” as an example. “If you think of [resources] as being finite, then your tendency is to grab as much as you can for yourself or your children,” Vincent says. “When we have such a narrow definition of success—like there are only 10 seats at [a competitive university] and our kid has to get one—it’s sometimes painful for us to let go of that idea, because it feels like a sacrifice.”

Alternately referred to as “resource hoarding,” this phenomenon is evident in actions large and small, sociologists John B. Diamond (University of Wisconsin) and Amanda E. Lewis (University of Illinois at Chicago) surmised in a recent academic paper on the subject—from parents lobbying to get their children into gifted programs to fighting school boundary changes that would send their kids to schools they consider inferior. The private “learning pods” that many families formed during the pandemic, paying tutors to keep their kids on track with distance learning, are another example. All are scenarios in which white parents who simply “want the best for their kids” come into play.

Shifting that mindset to one that is more intentional and inclusive, Vincent says, is one way to help level the playing field: “Parents know when something is wrong, but they may not know how to fix it. Advocating for more than just your own child—for the benefit of every child—is a step toward closing the opportunity gap.”

Take, for example, the matter of PTA funding, which schools rely on to bankroll needs both in and out of the classroom. According to the Arlington County Council of PTAs (CCPTA), parent-teacher associations countywide spend about $2 million annually, but more than 75% of that spending is concentrated in schools north of Route 50, in Arlington’s whiter and more affluent neighborhoods.

To share the wealth (literally), the CCPTA has established a communal grant fund where PTAs can pool a portion of their money. Arlington schools with fewer resources can then apply for grants to fund programs they might not be able to cover on their own, like grade-wide field trips. The fund is slowly gaining traction, although it has yet to enjoy the same level of support as individual school PTAs.