When Covid-19 interrupted plans to honor this American hero with a proper retirement ceremony at Fort Myer, we knew we had to step up. 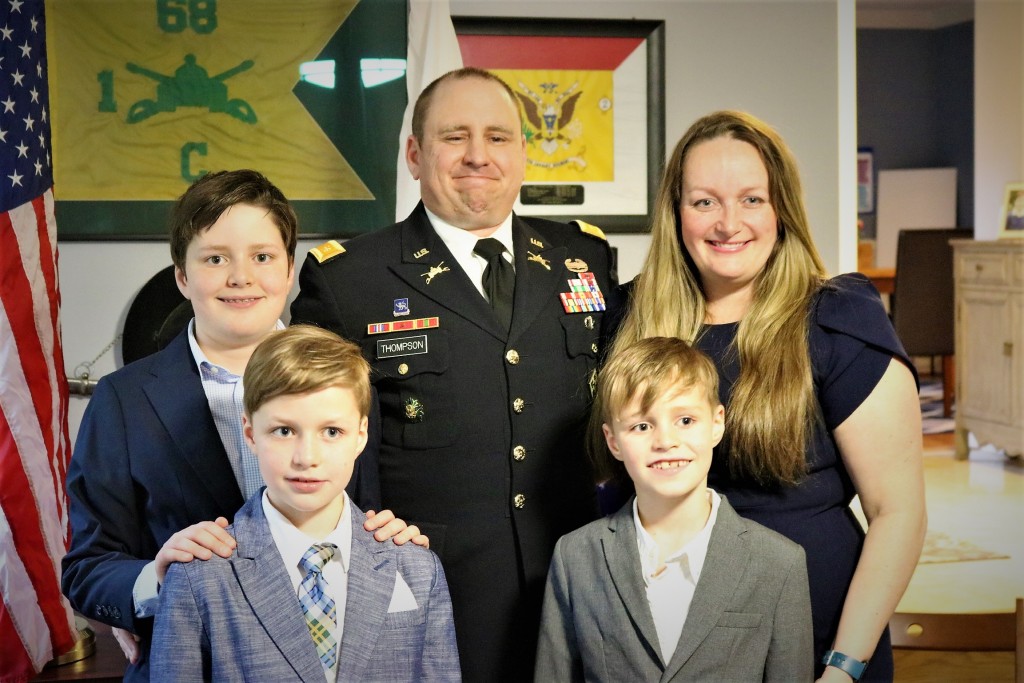 You can’t see it in this picture, but U.S. Army Maj. Kristofer James Thompson has a dozen combat stripes adorning his right sleeve. That is one stripe for every six months in combat. The 12 stripes represent the six years he spent deployed, defending our freedom.

Kris deployed to Iraq four times and to Afghanistan twice over the course of his 25 years of service to our nation.

We first met the Thompson family in 2014 when they were looking for a rental home in Fairfax County.  We, too, were an Army family and were in the process of moving out of our rental. Ironically, we purchased the home next door, and they became our neighbors, then our friends.

Over the past six years, we have watched the Thompson boys grow up. They advanced in Cub Scouts and became avid swimmers on the local swim team.

We watched Elena send her husband to war twice—never missing a beat or asking for help. Instead, she is that friend who volunteers at her sons’ schools, provides meals for sick neighbors and is always the first to ask how we should celebrate someone’s birthday.

When the Covid-19 pandemic interrupted Kris’s plans for a proper retirement ceremony at Fort Myer, with honors from the 3rd Infantry Regiment—also known as the “The Old Guard”— it was easy to see we needed to step up, just as the Thompson family has done so many times, for so many others.

On April 30, we honored Kris’s service and sacrifice, in his living room. My daughter served as the Facebook Live videographer (filming from a safe distance). Another neighbor took still photographs, also from a distance.

My husband printed certificates that are normally signed by the Chief of Staff of the Army. It was my privilege to present them to Kris in front of a virtual crowd of hundreds of family and friends.

The ceremony was simpler than usual, but no less significant. The sacrifice of our military rarely hits home for many Americans. It was my honor to celebrate this American hero’s service in his home.

Lisa Griffin is a colonel (retired) in the U.S. Army