DGS Does Jewish Deli With a Twist

Reubens, latkes and lox get the creative treatment at DGS Delicatessen in the Mosaic District. 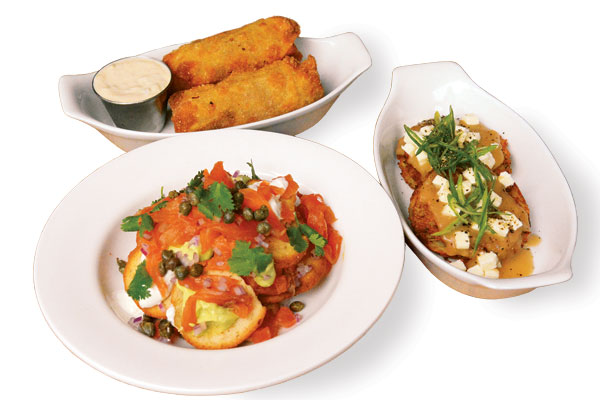 When DGS Delicatessen opened in June in the Mosaic District, Merrifield got a deli with just the right amount of attitude. Executive chef Brian Robinson, who grew up eating traditional Jewish foods, thinks his dad would be on board with the direction he’s taken but suspects his mom might raise her eyebrows. “It’s not the norm by any stretch,” he says, “but one thing that makes us different is our ability to improvise.” www.dgsdelicatessen.com

Canada meets Brooklyn in this dish that tops crispy potato latkes with a gravy Robinson makes from brisket jus that’s been cooked down with sweet onions. Queso fresco replaces the cheese curds commonly associated with poutine.

DGS fuses this Chinese takeout staple with a Jewish deli’s signature sandwich to get the Reuben Egg Roll. A wonton wrapper is filled with corned beef, pastrami, Swiss cheese and sauerkraut before hitting the deep fryer. The addictive snack is served with a kicked-up Russian dressing dipper.