Is it an insect? Or a drone? If you're near CIA headquarters you can't be too sure. 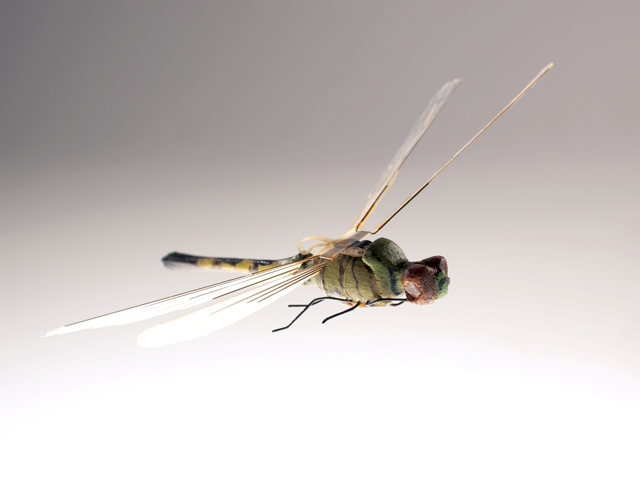 A dragonfly-drone prototype from the CIA Museum’s Artifacts collection. Photo courtesy of The Central Intelligence Agency

That buzz above your head may sound and look like a bug, but it could be a flying spy device developed by the CIA.
In the early 1970s, the CIA, along with the Arlington-based Defense Advanced Research Projects Agency (DARPA), built a series of prototypes of a small, robotic device that creators referred to as an “insectothopter.”

Its purpose was to hover near—and record—unsuspecting marks, appearing to be nothing more than a common green darner, or dragonfly, thus earning it the more colloquial nickname of “dragonfly drone.”

“It was an early version…of a small, unmanned aerial surveillance platform that you could fly into areas where people couldn’t normally go and watch,” says H. Keith Melton, a longtime historical adviser to the CIA and one of the world’s foremost collectors of spyware.

Among the artifacts in Melton’s collection—which includes more than 7,000 objects, many of them on display at the International Spy Museum in Washington, D.C.—is a KGB replica of a dragonfly drone that he procured in Moscow, though he declines to share further details about the acquisition. (“Some things are best not discussed,” he says.) Another insectothopter prototype can be seen at the CIA Museum in McLean.

In theory, the original dragonfly drone was an ideal tool for espionage. It had a flying range of about 650 feet (roughly the length of two football fields), a data transmission range of approximately 300 feet, and the ability to remain airborne for 60 seconds, according to declassified CIA records released in 2019. “You could fly anywhere, park it out of sight, and it would sit there and be a surveillance platform,” says Melton, who lives in Florida. “It would get audio and video and transport [that information] a short distance.”

The spycraft’s creators saw the dragonfly as one of nature’s better models, given its gliding ability—which conserves energy. But there were also drawbacks to being small and light. “Its greatest enemy would be wind, and the [ability to go long] distances,” Melton says, noting that the original insectothopter can be seen fighting crosswinds in a flight video released by the CIA.

The concept was deemed an overall success by the agency in 1974, but as far as the public knows, it never went beyond the prototype phase. That doesn’t mean a more modern version of the insectothopter isn’t out there today.
“How do you know it isn’t?” Melton says. “I believe it is still being used.”

Visitors to CIA headquarters in Langley have, in fact, reported a preponderance of dragonflies zooming around the parking lot. Maybe it’s the habitat.