Head to the centuries-old town of Onancock and pick up a kayak or skiff. 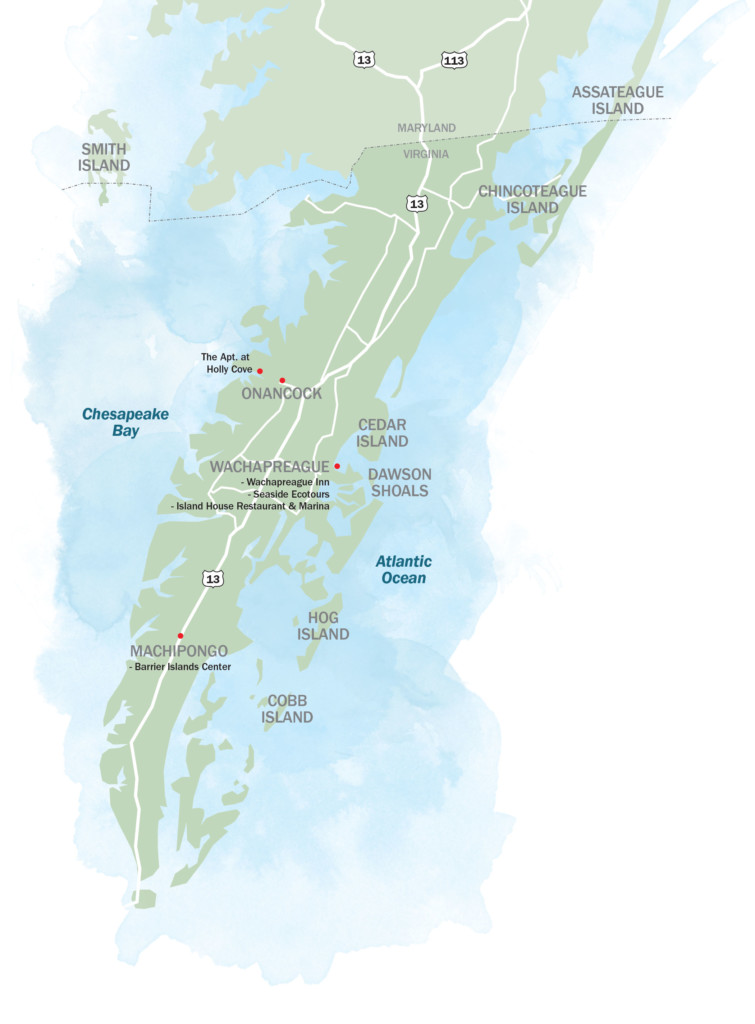 The next morning we drive 20 minutes east to the Atlantic side, where a 70-mile-long string of barrier islands, many of them owned by the Nature Conservancy, protects the mainland. The day starts cloudy as our guide, Meriwether Payne, with Seaside Ecotours, carries us away from the town of Wachapreague on a Carolina skiff. The still waters of the “cut” (what locals call the marsh creeks), flanked on either side by yellow spartina grass, beautifully reflect the clouds.

Payne slows to point out wild oysters protruding out of the pocked mud at low tide. “Oysters will grow on anything,” she says. They shut when the tide recedes and open to feed when the waters rise. The same marshes provide nesting grounds for fish, crabs and birds.

Lately, Payne says, she’s been focused on identifying birds by their calls. Hearing the distinctive, warbling cry of the whimbrel, a shorebird with variegated plumage, we squint to spot it. The bird’s downturned beak is designed to reach into the muddy burrows of fiddler crabs, a dietary staple that fuels its migration to the Caribbean. We also observe terns, oystercatchers, gulls, sandpipers, egrets and a juvenile bald eagle.

Motoring on, we pass the site of an 1887 hunting club whose four buildings have since been reduced to mere pilings. Hog and Cobb islands had a post office, schools and year-round inhabitants, Payne explains, before the devastating hurricane of 1933. That same storm obliterated the thin strip of land that once connected Assateague Island to Ocean City, Maryland. This dynamic shoreline is constantly reshaped by wind, rain and storms, and likely will be even more so in the years to come.

We aim for Dawson Shoals, a tiny, outlying island of sand inhabited by post-nesting skimmers. Walking where the Atlantic laps against the shore, I feel like we’re on the edge of the known world. The island’s beauty is sparse and pristine, and we have it to ourselves, save for the protective, parenting birds that squawk and swoop overhead.

At our next stop, Cedar Island, Payne points out pilings from vacation homes erected as late as the 1990s, which “have all washed away, burned or were moved inland.” Centuries ago, Cedar boasted many trees. Now storm tides occasionally inundate the land—a phenomenon known as “overwash”—depositing new sand, disrupting vegetation and reconfiguring the shoreline. It’s not optimal topography for humans, but oystercatchers and piping plovers prefer these open, shelly habitats because they can see predators coming.

Like the birds that frequent them, barrier islands can migrate. In the last decade, Cedar Island has moved westward 500 feet and lost about a third of a mile off its south end—a shift that concerns the locals. Wider gaps between islands mean the marsh and mainland have less of a buffer from storms.

But on this afternoon, the skies are relatively clear and the winds are calm. Donning our shoes (shells can be sharp), Jan and I search for small treasures in this fascinating land of shifting sands and fortunes.