What happens when your religious upbringing no longer fits? Some area residents are reconsidering their spiritual options. 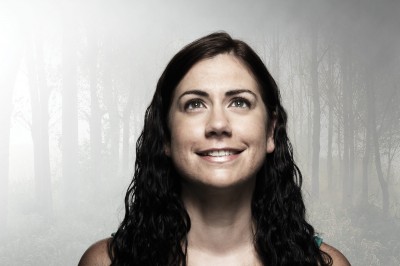 Ashley Brown was at work in August 2006 when she noticed a headline on MSNBC about a Black Hawk helicopter crash in Iraq. She immediately emailed her husband, Jeff, an Army sergeant who had been deployed as a crew chief for a medevac unit. He didn’t respond.

“I went home that day and pulled into the parking lot of my apartment complex and saw the government license plate,” Brown says. “I ran inside, as if I could escape the guy.”

Moments later a military official knocked on her door and told her what she already knew. She was a 24-year-old widow.

Brown’s parents offered to pray for her, but she brushed off their support. “I was like, okay, good for you, whatever,” says Brown, who was living in Dallas at the time and working as a receptionist for a software company. Her family had never gone to church when she was growing up. Sundays were “all about football.” Her parents had only become religious later in life.

Crushed with grief, Brown turned to drinking and drugs before seeking help from the Tragedy Assistance Program for Survivors (TAPS), an Arlington-based nonprofit that maintains a national support network for families of the fallen. In January 2012, she accepted a job at TAPS and moved east. That’s when she found Grace—literally.

Specifically, she discovered Grace Community Church, an Arlington congregation of about 800 people that meets on Sundays at Thomas Jefferson Middle School. Founded in 2000 by Pastor John Sye Jr. and his wife, Krista—both of whom grew up attending Arlington Assembly of God, a Pentecostal church on North Perishing Drive—Grace Church bills itself as a “church for people who don’t go to church.”

Brown says she was drawn to Grace’s come-as-you-are vibe, and felt like it was a safe environment where she could struggle with questions of faith and doubt without judgment. “They don’t try to pretty up faith or pretend like, ‘We have Jesus so everything is perfect,’ ” she says.

Impacted by the story of Jesus’ resurrection, Brown resolved to start a new life. Today, she volunteers at two charities and has given up alcohol and drugs. In October, she ran the Marine Corps Marathon 10K event in honor of her late husband.

Like the household of Brown’s youth, our culture has grown more secular in recent decades. Whereas 70 percent of Americans in 1992 reported being a member of a church or synagogue, that number dropped to 59 percent in 2013, according to Gallup poll data. Moreover, some 13 million Americans now identify as atheist or agnostic, according to the Pew Research Center’s Religion & Public Life Project. But God is far from dead.

In Northern Virginia, thousands still carve out time for prayer and fellowship—from the 180 Jewish families who make up the Conservative Congregation Etz Hayim on Arlington Boulevard, to the 2,000 parishioners who flock to Sunday services at The Falls Church Anglican, nearly three centuries after it was founded in 1732.

On Fridays, it’s not uncommon to see a turnout of more than 3,000 Muslims for prayer services at the Dar Al-Hijrah Islamic Center in Falls Church.

And with an average weekly attendance of 15,000, McLean Bible Church on Leesburg Pike—which maintains seven campuses in Northern Virginia and holds Monday services at the Rosslyn Spectrum Theatre—counts as one of the 25 largest evangelical megachurches in the nation, according to the Hartford Institute for Religion Research in Connecticut.

Still, not all of those seeking God are sticking with the religious faiths or denominations they knew as kids.

Brad and Beth McDonald were both raised Catholic, but began exploring other options after they married. “The Catholic churches we attended seemed to emphasize the liturgical aspects, with too light a focus on other aspects of Christianity,” Beth explains. “We visited other churches that had an emphasis on the relational aspect of Christianity and that really appealed to us.”

Now in their mid-40s, the Tara-Leeway Heights couple attends National Community Church (NCC) in Ballston. NCC’s teachings are Bible-based, but its approach is unorthodox. Services are held in the Regal Ballston Common movie theater, the music is contemporary, and the casual dress code means that plenty of people show up on Sunday mornings in jeans.

The McDonalds say they appreciate how the church “teaches old truths in new and relevant ways.” And they like the fact that NCC has pastors who are married with children. “The pastors can understand married life in Washington, D.C.,” Brad says.

Sally Knuckles was raised Baptist, but was turned off by teachings on guilt and damnation. She left the church after her brother, a schizophrenic, committed suicide at age 24.

“That was the first big death I experienced,” says the Falls Church resident, who was 33 at the time. “I was bitter and angry and didn’t want [to be] a part of any God that allowed that to happen.”

That’s when Knuckles joined the Metaphysical Church, which holds the belief that communication with the dead is possible through mediums (people who have been trained to channel messages from spirits).

In the years that followed, Knuckles lost both of her parents to cancer, as well as her sister, who died of a stroke. Feeling alone, she became even more interested in trying to communicate with their spirits.

Now 63, Knuckles serves as senior pastor of the Arlington Metaphysical Chapel on Wilson Boulevard, which has about 120 members. She says the group has seen a 20 percent increase in participation in the past 18 months—a trend she attributes to people wanting spiritual connections without dogma.

The Metaphysical Chapel’s Sunday morning service doesn’t involve psychic communications (instead it might have piano music by Brahms, a homily on love and a silent meditation). But the evening service, called a “billet” service, is different. Participants are invited to write down the name of someone who has passed away, along with a question that may or may not pertain to the deceased. A medium then channels the spirits of those whose names have been written down.

Not everyone who leaves one religion feels compelled to join another. “When I was young, it seemed like everyone went to church,” says Ellen Campana, who grew up in Arlington’s Bluemont neighborhood. She served as an altar girl at Holy Trinity Catholic Church in Georgetown and attended mass sporadically in college, but then stopped. “I was increasingly bothered by the church’s position on social issues,” explains the Arlington Heights resident. Campana now considers herself a non-faith person.

She is not alone. According to Gallup research, the percentage of Americans reporting their religious preference as “none” increased from 2 percent in 1948 to 15 percent in 2013. (Pew Research places the ranks of the “nones” closer to 20 percent.)

For Chris and Hilary Cronin, Sundays are sacred, although they don’t go to church. Instead, the Arlington couple reserves the day for family outings that get their three sons away from their iPads and video games.

One weekend, the Cronins participated in a service at the Shambhala Meditation Center in D.C.’s Cleveland Park, which follows a philosophy rooted in Buddhist principles. “I like to expose [the boys] to different customs and traditions,” says Hilary, 39, who was raised Lutheran but now describes herself as “nonpracticing.”