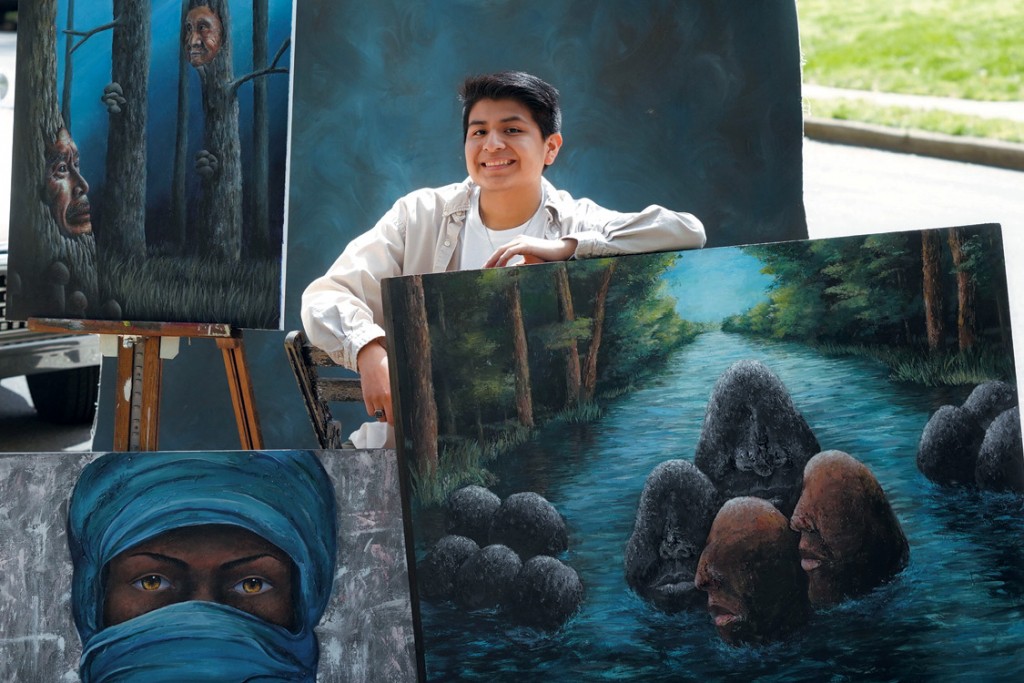 The summer after seventh grade, Dominick Cocozza attended a prestigious art program at the Interlochen Center for the Arts in Michigan, having secured one of only 12 international spots for his age group in the advanced drawing and painting program. He recalls the experience as both motivating and humbling.

“I was always used to being one of the more advanced people in my arts classes,” says the Arlington teen, “and that was a really eye-opening experience because I was kind of in the middle. It pushed me to be better.”

Since then, Cocozza has racked up accolades for his work, much of which centers on multicultural themes and social justice issues, including the plight of immigrants and Dreamers. He won first place in the Congressional Art Competition (his winning painting now hangs in the U.S. Capitol Building); attended the Governor’s School for Visual and Performing Arts; and was named Grand Champion in the fine arts and crafts category in the Arlington County Fair.

He maintains his own website and has been interviewed by CNN and the BBC.

Last fall, Cocozza landed a competitive internship at the Smithsonian Institution’s Hirshhorn Museum and gave a gallery talk at the National Gallery of Art. His dream, he says, is to one day have his work in permanent museum collections.

He also managed to find time for varsity swimming and cross-country at Yorktown, and to serve as a board member and creative director of High School Minority Leaders United.

During quarantine, he continued painting classes (via Zoom) with his mentor, Gavin Glakas, of Yellow Barn Studio in Glen Echo, Maryland.

Now 18, he plans to attend the Rhode Island School of Design, where he’ll concentrate on painting. He credits his parents with encouraging his entrepreneurial spirit, and hopes will give him an edge in the art world. “I’ve been focusing on promoting myself,” he says.