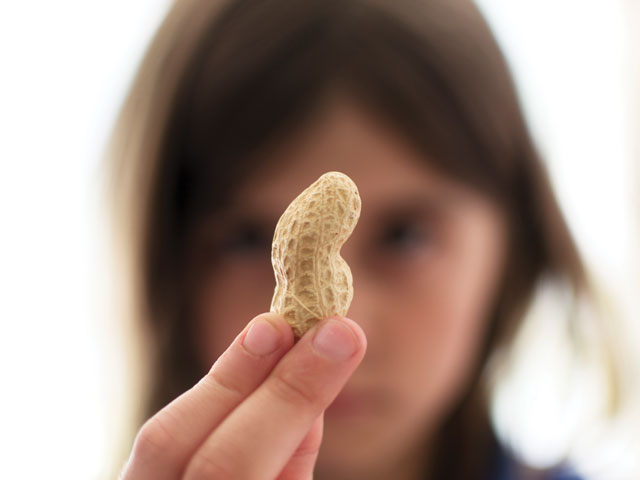 The eczema that covered little Gwen’s body was the first clue for Kate Fairchild that something was amiss with her infant daughter. Their pediatrician suggested trying non-dairy formula, but the eczema wouldn’t go away. “Her skin was so bad,” recalls the Arlington mom. “Her hands looked like a burn victim.”

The pediatrician ordered a blood test, which confirmed that Gwen was allergic to eggs, peanuts and tree nuts.

Fairchild was taken aback—neither she nor anyone else in her family has food allergies—but she looked at Gwen’s diagnosis as a project to tackle. Their family would live a great life, she decided. They’d just work around her daughter’s dietary restrictions.

As a stay-at-home parent, Fairchild didn’t worry much about her daughter’s health the first few years because she was with her all the time. Even so, there were close calls. When Gwen was 1, the family went out for breakfast and her face broke out in hives after she ate a piece of bacon. It turned out the bacon had been cooked in the same pan as another customer’s eggs. “I hadn’t thought about that,” Fairchild says. “That was my first wake-up call.”

Then there was the time she had to jam an EpiPen into Gwen’s leg on the last day of preschool. The place was nut-free and everyone knew her daughter had a severe egg allergy. But one of the parents had brought in turkey sandwiches with mayonnaise, not realizing that mayo contains eggs. Gwen started eating one, and told her mom her tongue and throat “felt funny.”

“I looked at this sweet little girl,” Fairchild says, “and I said, ‘I have to Epi you,’ and she burst into tears.”

Imagine, for a moment, the things so many of us take for granted: the ability to eat whatever you like; to travel without lugging along special meals; to send your kid to a friend’s house without issuing a lengthy set of instructions about the foods they need to avoid. Not having to worry that your daughter may break out in hives if she eats the cupcakes in class. Not thinking about whether your high schooler brought his EpiPen to football practice.

Then consider how life works for families where one or more children have a severe food allergy. Going out to dinner turns into a cross-examination of the waiter, and sometimes the chef, about ingredients. Traveling outside the U.S. is risky if language barriers make it difficult to ask how the food is prepared. Sibling jealousy takes hold if one child has allergies and the other doesn’t.

“I’ve had families describe this as like a shadow that follows them around,” says Linda Herbert, director of the psychosocial services program for the Allergy and Immunology Division at Children’s National Hospital in Washington, D.C. “We’re eating multiple times a day, and you have to make a decision about whether it’s safe, whether to trust the person giving you food. You need to be constantly prepared and be aware of what’s around you.”

Some 5.6 million U.S. children under age 18 (roughly 7.6%) have food allergies, according to research published in 2018 in the journal Pediatrics. Most of us are familiar with the most common allergen—peanuts. Other common offenders include milk, shellfish, tree nuts, eggs, fish, wheat, soy and sesame.

Peanut allergy in children has increased 21% since 2010. Today, nearly 2.5% of all U.S. children are allergic to peanuts, according to research by Ruchi Gupta, a food allergy expert at Northwestern University. And it can be dangerous. Peanut allergy is the leading cause of anaphylaxis—a life-threatening allergic reaction—and is rarely outgrown. (Kids can, however, outgrow milk, egg and wheat allergies.)