Donald Lipski, creator of Manhattan's "Spot," is planning something special in Arlington.

Local residents now have the opportunity to contribute the building blocks for one of Arlington’s tallest public art projects to date.

The 60-foot statue, dubbed “The Pike,” will be erected in 2019 and stand at the border of Arlington and Fairfax counties along Columbia Pike.  Produced by the Arlington Department of Public Art in conjunction with famed sculptor Donald Lipski, the piece is designed to commemorate the historic significance of Columbia Pike, as well as the neighborhood’s present-day multiculturalism. 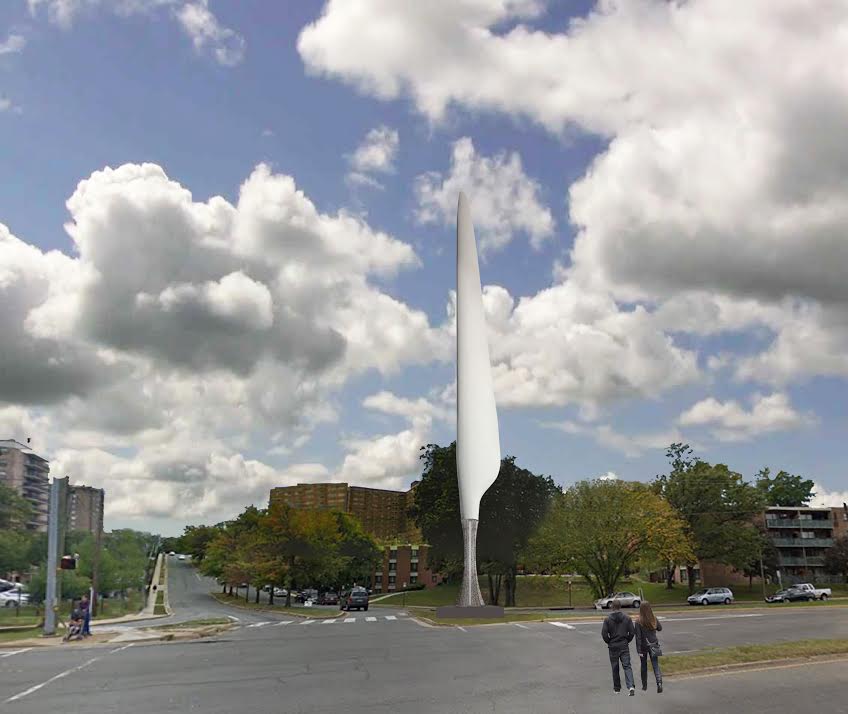 A rendering of  “The Pike.”

The structure will consist of a single wind turbine blade affixed to a base made of coins. That’s where members of the public come in. Arlingtonians are being asked to contribute various coins to “represent the homelands of those who live in our community,” although there aren’t any restrictions on the coins’ denominations or points of origin.

The prompt is designed to reflect the diversity of the Columbia Pike corridor, which, Ehren points out, was identified by the Brookings Institution as the most diverse neighborhood in the D.C. metro area, with immigrants from 128 countries and counting.  The main collection points for coins are the Courthouse Plaza lobby, Columbia Pike Branch Library and Arlington Mill Community Center.

Among those who have contributed so far is Christine Carutolo, who donated the coin collection of her late husband. He was born in Macau and collected currencies from all over the world. Carutolo also successfully persuaded her neighbor, a retired military officer with a global career, to donate his entire coin collection.

“He was proud to be a part of the Pike, as one of many in our immigrant community,” she says.

Lipski, a former Guggenheim fellow whose work has appeared in art galleries worldwide, is also well known in the world of public art, with award-winning installations in various airports, schools, libraries and sports stadiums. 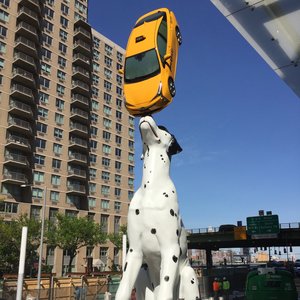 Donald Lipski’s “Spot” in Manhattan features a 30-foot Dalmatian balancing a real taxi on its nose.

Columbia Pike takes its name from a road that was originally was chartered in 1810 by Congress, with the goal of connecting outlying areas to the District of Columbia. Back then, the road was called a “turnpike” because it was blocked by a literal pike that would be raised vertically to grant passage to those who paid a toll.

Lipski’s design evokes the verticality of that raised pike, symbolizing that the flow of people and ideas is eternally open in the thriving Columbia Pike corridor. The artist says he was also inspired by the soaring, 300-foot Air Force Memorial that marks the eastern end of the road.  While “The Pike” sculpture won’t be nearly as tall, the idea was to have a comparable landmark bookending the western end of the corridor, where it passes from Arlington into Fairfax County.

Lipski’s sculpture repurposes a wind turbine blade that was originally intended for a community project in Belgium, but was eventually left for waste.  Arlingtonians can contribute coins through October 8.