Frederick is for Foodies

The Maryland city is packed with quirky-cool places to eat and drink. 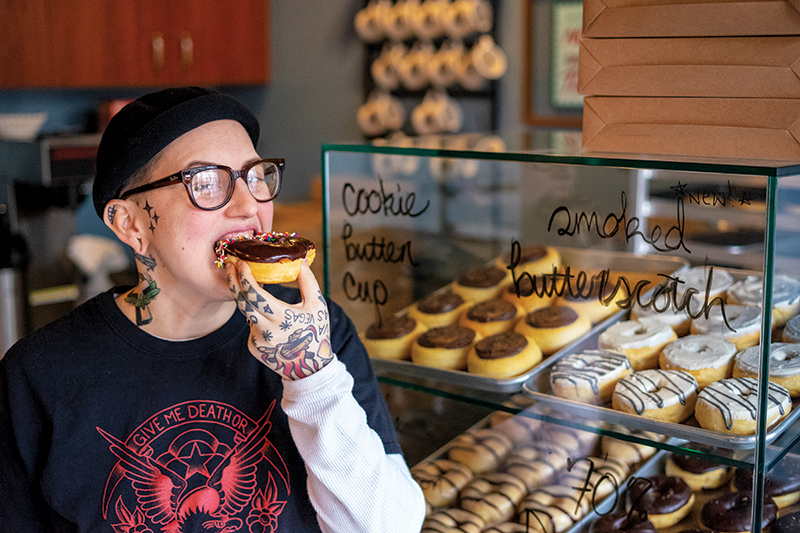 Chef Bryan Voltaggio and co-owner Hilda Staples put Frederick on the map as a fine-dining destination when they opened Volt in 2008. While the nationally recognized restaurant remains a go-to for gourmands, a growing group of eateries, food shops, breweries and distilleries gives visitors many more reasons to eat (and drink) there.

As Maryland’s second largest city with a population of about 70,000, Frederick radiates hipness, history and small-town charm all at once. The city has seen a recent influx of millennials and retirees, thanks to its quality of life, affordability and proximity to major cities and airports. With the new residents have come a raft of craft beers, sophisticated cocktails and trendy menus that include vegan, vegetarian and gluten-free fare.

Food and drink are far from the only draws, as Frederick offers a host of other attractions, including historic churches and homes, hidden courtyards, antiques shops, parks and public art (don’t miss local artist William Cochran’s trompe l’oeil murals, such as the one on the southwest corner of West Church and North Market streets). With so much to do, it’s easy to spend a weekend in Frederick, and there are a few bed-and-breakfasts downtown in Victorian mansions (see visitfrederick.org/places-to-stay/bed-and-breakfasts). The Barbara Fritchie House on West Patrick Street can even be rented through Airbnb. (Fritchie was a devoted and outspoken Unionist during the Civil War.)

There are plenty of places to refuel between your meanderings. Here are some of the newer and notable restaurants, markets and beverage companies that have opened in the last few years. 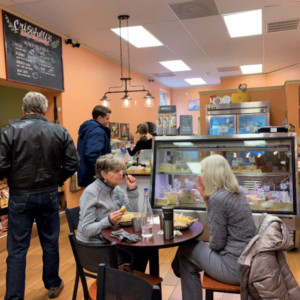 This well-stocked and multipurpose cheese, charcuterie and wine shop is run by three generations of hometown women (Betty Gardiner, daughter Sharon Crisafulli and granddaughter Caitlin Crisafulli). They offer a rotation of more than 200 cheeses, pantry items (crackers, olive oil, jam and more), refrigerated antipasto, cheese boards, wine and gifts; hold cheese-tasting classes; assemble catering platters and gift baskets; and field online orders, including cheese-of-the-month clubs. Sandwiches (with cheese, of course) are served at lunchtime, and for those who aren’t carrying out, two tables provide seating for enjoying such options as The Betty Brie (double crème brie with ham, Dijon and cornichons on ciabatta).

This vegan doughnut and lunch shop is quaint, welcoming and out of the ordinary. Aside from freshly baked doughnuts that come in flavors such as rosewater, salted Earl Grey and French toast, the menu includes Belgian waffles infused with Pabst Blue Ribbon lager, huevos rancheros made with a tofu fried “egg,” and salads, tacos and vegan burgers. Located in a renovated townhouse, Glory has limited seating and funky music—and a line for doughnuts that can wind out the door. 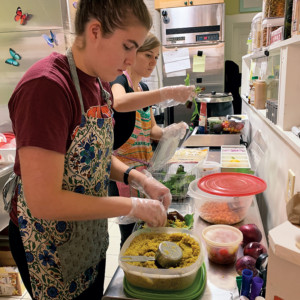 What started as a stand at Frederick-area farmers markets in 2016 turned into a vegan café and draft kombucha bar in 2017 for 28-year-old Erika Brown. A native of Frederick, Brown graduated from Towson University in 2013, then lived in Greece, traveled around Europe, volunteered on organic farms, and hitchhiked around Kauai, Hawaii, before starting her business. Decorated with belongings from her college bedroom (with walls painted the same yellow, orange and green as her Towson digs), her colorful shop includes a handful of counter seats and a peaceful back patio for enjoying hummus platters, rice crust pizza, tacos and falafel or acai bowls. Rotating hummus flavors, such as coconut curry or everything bagel, are creamy and flavorful, and also available in containers to go.

This dark, clubby eatery features Maryland beer on tap and unfussy cocktails, some made with local libations. For brunch, the classic Bee’s Knees (here spelled “Beez Knees”) is shaken with Forager Gin from Frederick’s McClintock Distilling Co. and is an unexpectedly good companion for the buttermilk lime pancakes. The restaurant recently doubled its bar space, with a morning coffee station on the second floor transforming into a lounge in the evening that serves cocktails and small plates. 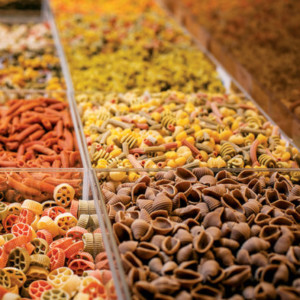 It’s hard to imagine you couldn’t find a pasta to please your palate at The Pasta Palette, an Instagram-worthy shop that showcases 100 varieties of dry and fresh-frozen noodles from Pappardelle’s, a Denver company. The garlic chive, basil garlic and Italian pesto blend pastas are three of the top sellers, and there’s high demand for the almost two dozen gluten-free options. Co-owners Terri and Mike Winder also own four other downtown Frederick food businesses; the newest is Good Juju, a smoothie and juice bar that serves vegan and gluten-free breakfast and lunch. 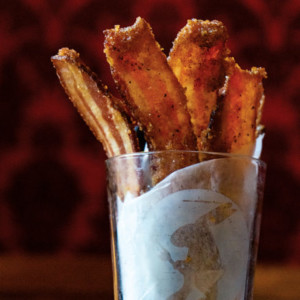 There’s a lot to like about this hip two-story gastropub that opened in July 2017. Thick slabs of candied bacon and a terrific take on avocado toast are among the appetizers, while inventive iterations of steak frites and steak sandwiches share menu space with plenty of vegetarian, vegan and gluten-free options. There are 38 beers and four wines on tap. The tap handles, affixed to a background mural of pennies, are made from antique Victorian cabinet handles. On the second floor, doors from old row houses in Baltimore serve as tables, while the seats are pews from a Washington, D.C., church. 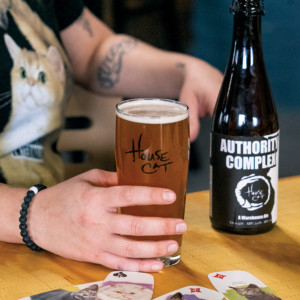 Park once and hit this trio of distinctive breweries within a stone’s throw of one another, with food truck fare at each. Attaboy Beer, a laid-back spot with concrete floors, a large bar and indoor and outdoor seating areas, opened in January 2017 and specializes in New England IPAs and Belgian-style brews. A few doors down at House Cat Brewing—open since last July—framed pictures of customers’ cats hang on the 120-seat taproom wall, and the focus is on sour beers. (The cat theme stems from co-owners Jack Sheppard and Joe Idoni’s discovery 11 years ago that they were not only dating the same woman unknowingly, but also sharing the same cat with her.) Right across Carroll Creek from Attaboy and House Cat, Idiom Brewing Co. started serving a variety of beer styles when it opened in November in a refurbished 1920s hosiery factory. After all that beer, walk to nearby McCutcheon’s Apple Products’ factory store, where you can stock up on jam, jelly, honey, relish, salsa, sauces, mixes and other items you never knew McCutcheon’s sold.

These two breweries with taprooms, oddly situated in strip shopping centers outside the historic district, are small and within walking distance of each other. Rockwell, which brews a variety of styles, including IPAs, stouts, porters, blondes and reds, is located behind Family Meal, chef Bryan Voltaggio’s diner. The brewery serves a few dishes made at Family Meal, including fried chicken and double-stack burgers. There’s no food at Midnight Run, but the brews, which this winter included a gingerbread ale with molasses, ginger, cinnamon and clove, are unique. 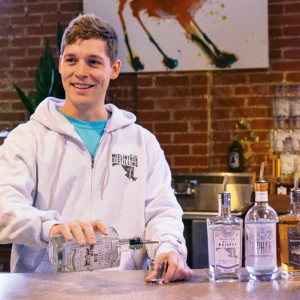 College buddies Braeden Bumpers and Tyler Hegamyer have come a long way in a short time with their distillery, winning a slew of awards since they opened in 2016, including a double gold medal for their Reserve gin in the 2018 New York International Spirits Competition. Bumpers, 29, grew up in Cabin John and graduated from Bethesda’s Walt Whitman High School, and Hegamyer, 30, hails from Frederick. Their facility, located in a century-old former mechanics shop, is Maryland’s first and only USDA-certified organic distillery and is named after McClintock Young, a prolific and innovative 19th-century Frederick inventor. Following in the creative footsteps of the distillery’s namesake, the partners claim that their Reserve is the first American gin to be aged in French cognac barrels. Their Forager Gin is vapor-infused with 21 botanicals. McClintock offers tastings, tours and classes, and can be rented for weddings and special events.

Friendly Frederick native Monica Pearce, the owner of Tenth Ward, has the distinction of making Maryland’s first absinthe, launched in July 2018. Her Absinthe Nouvelle registers at 140 proof and must be diluted with water and sweetened with sugar before drinking (with the help of an absinthe fountain available in the tasting room). The anise-flavored liquor is only one of Pearce’s locally sourced specialties, which include smoked corn whiskey, caraway rye and applejack. In November, she moved her tasting room a few blocks to within the historic district, and at press time was putting the finishing touches on an upstairs event space. Tenth Ward will add a bar/lounge this spring.

Don’t forget about these dependable longtime establishments, some with fresh features.

Frederick’s first brewpub opened a fabulous rooftop deck and first-floor terrace in 2016. It continues to brew seasonal and test beers on-site, but the bulk of its beer has been made at Monocacy Brewing Co. since 2012. Right outside downtown, Monocacy is also worth a stop.

Maryland’s highest-producing craft brewery exudes corporate coolness, complete with a terrific tour that includes five beer samples and plenty of humor. On weekends, the place is hopping, with its large bar, indoor and outdoor seating areas, food truck, cornhole, and a gift shop that sells everything from Flying Dog golf balls to hot sauce and soap.

This Vietnamese restaurant has been a popular destination for pho since 2006. In 2016, the owners opened a sister location a few miles away. 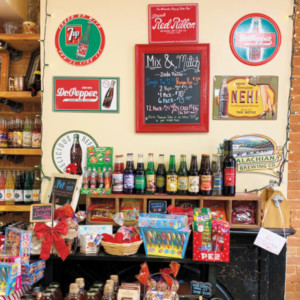 Carrot cake, bacon, buffalo wing, apple pie, toxic slime—they’re among the soda flavors at this store that stocks more than 500 bottled varieties. The toxic slime is a bright blue concoction that’s part of the Totally Gross Soda line at Avery’s Beverages. Don’t pass up a float made with Trickling Springs ice cream and any soda in the shop.

A perennial favorite among Frederick Magazine readers, taking first-place awards in several categories over the last few years, including “Best Restaurant,” The Tasting Room features a modern setting and interesting takes on standards such as salmon, steak and rack of lamb. The lunchtime swordfish Milanese is lovely. 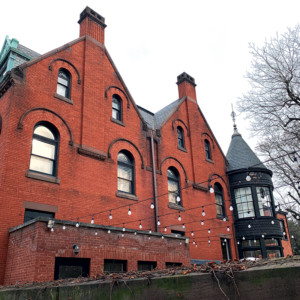 Chef Bryan Voltaggio’s chic restaurant, located in a 19th-century brownstone mansion, continues to set the bar for cooking in Frederick with its inventive modern American cuisine. The $35 three-course weekend brunch is a stunning sampler.