Get Your Bao Bun Fix at This Pop-Up 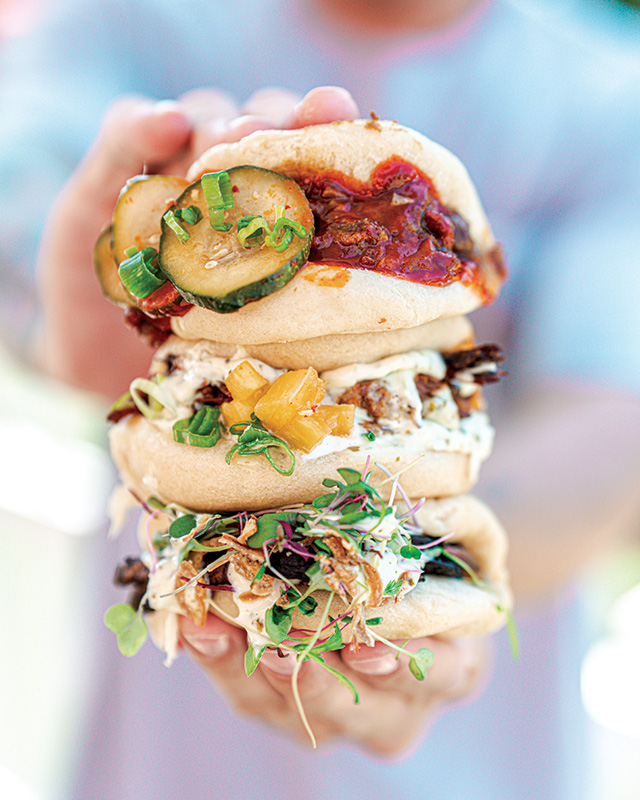 Beef, pork, and mushroom bao at Bun’d Up. Photo by Danny Kim

Scott Chung refers to himself as part of the Food Network generation. He grew up enthralled by Emeril and Iron Chef, but it was a trip to famed chef David Chang’s Momofuku restaurant in New York City—known for its pork belly bao buns—that became his light bulb moment. That’s when his mother, Soo Chung, suggested he go to cooking school for pastry.

In 2014, Chung graduated from L’Academie de Cuisine in Gaithersburg, Maryland, and apprenticed as a baker, helping his bread instructor make and sell pizzas at farmers markets. But he had his sights set on a different kind of dough. He started selling steamed buns under the name Bun’d Up at the Pike & Rose farmers market in North Bethesda, and then at farmers markets in D.C. and the Mosaic District. “That was a turning point for me,” says the Arlington resident, now 35. “Lunches were so busy I couldn’t keep up with bun production, so I introduced rice bowls to take the pressure off.” In 2018, Chung did a three-month pop-up at D.C.’s Union Market that was so successful the landlord offered to extend his lease for two years. He opened Rice Crook in Ballston Quarter in March.

In December, he signed a one-year lease for a Bun’d Up pop-up in Pentagon Row (replacing Gorilla Taco). He says he may extend the lease beyond that, but his goal is to have a stand-alone restaurant.

Chung’s homemade steamed buns are tender with a light brown hue (the white buns you see almost everywhere are frozen, he explains). The standouts at Bun’d Up are pork belly and pineapple kimchi; Korean barbecue beef with cucumber kimchi and pickled onions; and Korean double-fried chicken. Also not to be missed: kimchi fried rice with Chinese sausage and sunny-side up egg; oxtail soup; and zesty kimchi stew with pork belly, shiitake mushrooms and tofu.