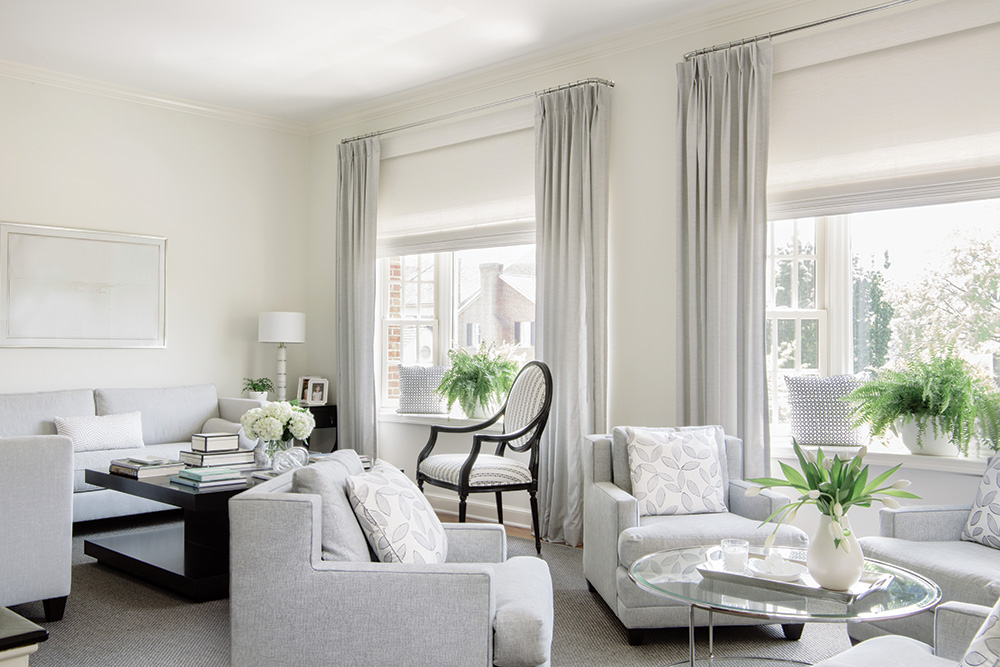 Ken and Robin Bracht chose a neighborhood within walking distance of downtown McLean when they moved from New Jersey for Ken’s job in 2016. Though they liked their townhome’s traditional architecture, it presented some challenges inside.

“The floor plan was so unusual, we felt like we needed some help,” says Ken, who works in marketing and advertising. The living room, in particular, was long and narrow, with different-sized windows. That made it awkward to furnish.

“It’s really the main entertaining space in the house,” says designer Stuart Nordin, whom the Brachts hired after admiring her contemporary style. “They wanted to have couples and children over at the same time, so it made sense to me to create two separate seating areas.”

Using Robin’s favored pale gray tones, Nordin established one side of the living room as a gathering place for company with a sofa and chairs around a large coffee table; the other side features an intimate conversation circle of four armchairs, where the couple’s daughters, Nicole, 13, and Kristin, 11, like to congregate with friends. It’s also the family’s go-to spot to play cards and board games.

Nordin solved the window problem by hanging draperies high above two bay windows that are shorter than the other windows in the room. The effect makes everything appear the same height.

Dark wood accents provide a visual punch against the otherwise ethereal color palette. “Those darker pieces anchor the room,” Nordin says. “I felt like we needed some contrast; otherwise, it would be too bland.”

The Brachts love the result. The girls frequently curl up in the window seats to read, and Robin relishes the tranquility. “I like that everything is soft-looking and peaceful,” she says. “You can just come in here and exhale.”

At the same time, Ken adds, “You can throw a pretty serious cocktail party in there!”