Locavores will find fine wine, craft beer and tasty spirits under the micro-appellation "Nelson 151" near Charlottesville. 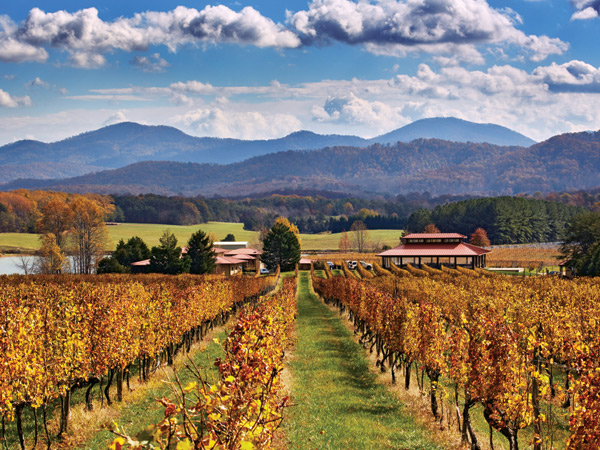 I still remember the time I ducked behind a wine-tasting tent at the Boar’s Head Inn in Charlottesville to spit out a vintage that was utterly unpalatable. It happened nearly 30 years ago, but the bad taste so soured my impression of Virginia wines that I avoided them for decades.

My, how times—and regional viticulture—have changed. On a recent return trip to the area, I find myself sipping a delightful 2014 Viognier, a varietal that rose to fame in the Rhone Valley but more recently became Virginia’s signature grape.

“It’s more of a classical take on a French-style Viognier with really nice peach and apricot flavors on the front of your palate,” explains Nick Dovel, head of tasting at Pollak Vineyards, whose picturesque terrace, 15 miles west of Charlottesville, overlooks rolling vines with a stony-faced mountain as the backdrop.

I nod, because I do so enjoy the poesy of a good wine description, then move on to sample the staff favorite, a 2012 Petit Verdot. Once again, Dovel’s narration doesn’t disappoint. “It has really nice notes of campfire and leather and smokiness in there,” he says of the full-bodied red. “It’s a good steak wine.” Behind him, I spy a succession of bottles bearing both local and national medals around their necks. 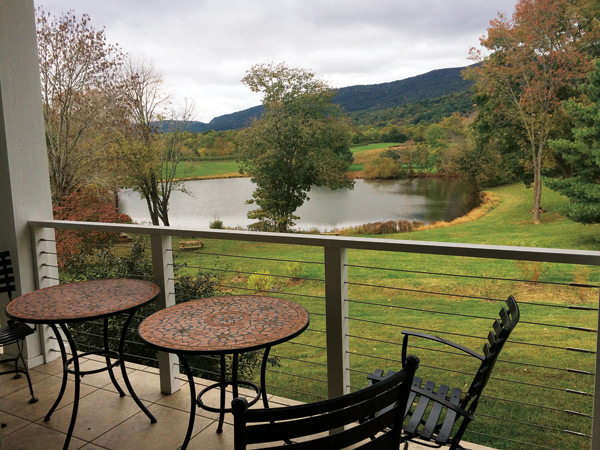 Ever since Thomas Jefferson planted his first vines at Monticello, would-be vintners in these parts have been seeking the ideal grapes and growing techniques for our fickle climate. It seems they’ve finally found them.

And yet, wine producers aren’t the only ones beckoning Virginians to partake of small-batch beverages made close to home. In recent years, the number of craft breweries in the Commonwealth has grown to more than 100, according to Virginia Tourism. The state is also now home to 12 craft distilleries. 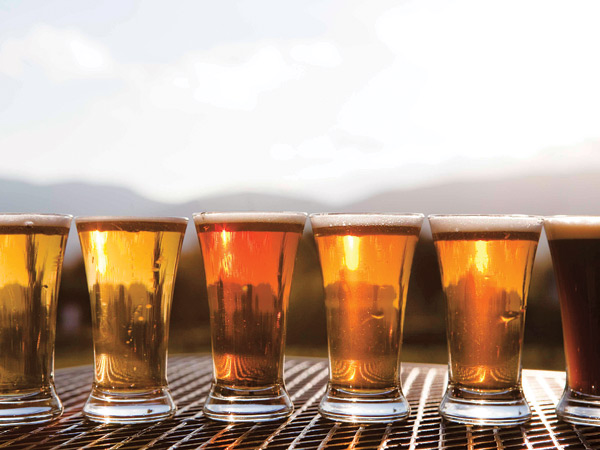 A flight of suds at Blue Mountain Brewery

That trend is evident on this visit to the Rockfish Valley, which lies at the base of the Blue Ridge Mountains, not far from Wintergreen Resort. Heading southwest from Pollak Vineyards, I cross the county line from Albemarle into Nelson County, where I find another five wineries, three breweries, a distillery and a cidery, all operating under the micro-appellation “Nelson 151.” (That’s shorthand for Route 151 in Nelson County.)

As it turns out, the sunrise side of the ridge also creates ideal growing conditions for apples, hops and grain.

At Hill Top Berry Farm & Winery, which Kimberly Allen Pugh co-owns with her husband, Gregory, mead is the drink of choice. But if you’re imagining a syrupy-sweet, medieval-strength hangover, think again.

“[Mead] is older than any other form of alcohol,” Pugh explains of the beverage, which predates the Vikings. Though it’s made by fermenting yeast and water with honey, Hill Top’s concoctions aren’t overly sweet, and they offer surprising flavor profiles. Some feature local fruits, such as wild persimmons, or seasonal infusions, such as cranberries.

To give the aptly named “Dragon’s Breath” its kick, the farm grows its own jalapeño and cayenne peppers and smokes them with locally gathered hickory wood. (Pugh likes to add this particular blend to Bloody-Mary mix for a tangy twist.) 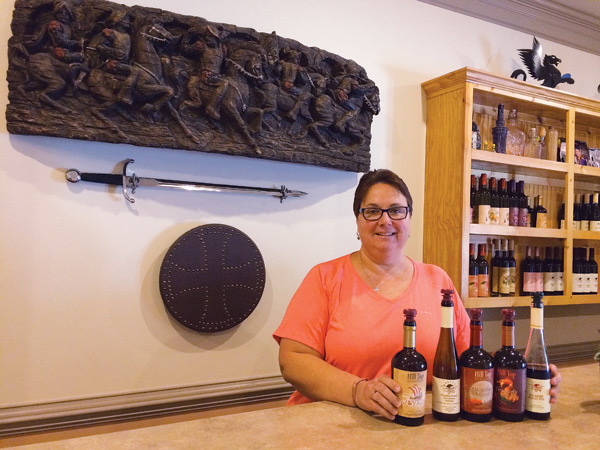 My visit to Nelson 151 coincides with the weekend of Festy, an annual musical camp-in sponsored by Devils Backbone Brewing Co., where I meet up with friends a short time later. Sidling up to the Western-style bar at the microbrewery’s Basecamp Brewpub and Meadows, I’m advised to sample the “Trail Angel Weiss,” a citrusy ale that proves perfect for a fall day.

My two friends play corn hole nearby while I sip, watching the intermittent clouds cast shadows on the ridge and savoring the rare leisure of having no cell service, the sweet scent of barbecue and the twang of country music wafting on the breeze.

The experience is made doubly carefree by our wise decision to splurge on a car service (Monticello Wine Tour & Coach Co.)—a must if you’re visiting the area without a designated driver. Parts of Route 151 are narrow and winding, as confirmed by one large, abandoned SUV we notice sandwiched between two trees.

Our next stop is Bold Rock Hard Cider, where a gleaming production facility is on display just behind the tasting room glass, and a small museum charts the history of cider-making. We each order a flight—four slim glasses nested in rustic wooden carriers—and settle into Adirondack chairs, heeding the bartender’s instructions to start with the drier end of the spectrum, working our way toward the sweeter ciders. We disagree on which is best—it’s a tie between the Virginia Apple or the IPA, a hopped cider—but all enjoy the tartness. 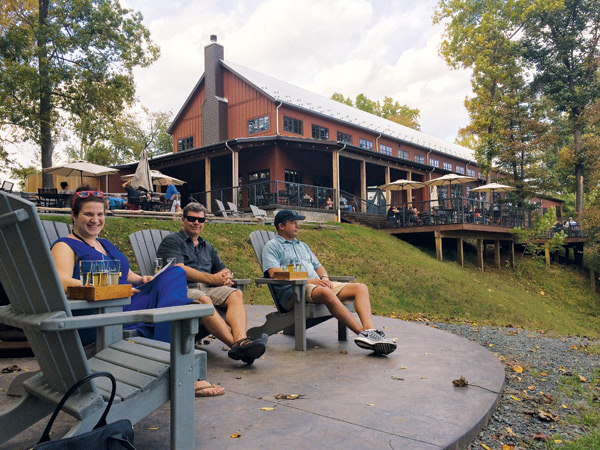 I generally stick to wine and beer (I’m a lightweight), but my friends are curious about the newest addition to Nelson 151—Silverback Distillery, which opened in August of 2014 and boasts the tagline, “We put the gin in Virginia.”

Soon, we are learning the origin of its moniker, a playful nickname bestowed upon the owner by his daughters. “It was my wife’s idea, and she’s the lead distiller,” says proprietor Denver Riggleman III, who co-owns the craft distillery with his wife, Christine. The eco-friendly operation runs on geothermal and soon-to-be-installed solar power, using local grains and filtered water from the Rockfish River.

Silverback’s Strange Monkey gin, whose bouquet features anise and Moroccan bitter orange peel, was one of 10 worldwide gins to receive a double-gold ranking at the 2015 San Francisco World Spirits Competition.

“We wanted something soft that has a lot of citrus and finishes easy,” Riggleman imparts, adding that gin isn’t the only option (they also make vodka, and they have bourbon and rye maturing in barrels). Showing off the still, he teaches me a new term, “angel’s share,” which refers to the percentage of alcohol that evaporates during the production process.

Visitors are allowed up to four tastes, with options ranging from a straight pour of the hard stuff to a delicious Moscow Mule made with peppery ginger beer and the distillery’s Beringei vodka (so named for the scientific term shared by all Mountain and Eastern Lowland gorillas).

The next day, after a solid night’s sleep, I refocus on wine and head to Afton Mountain Vineyards, where Tuscan-style buildings are perched on a ridge, enjoying 360-degree views as far as the eye can see. If I were a grape, I’d want to grow here.

That supreme sense of breathing room is enhanced by a glass of Afton’s Festa di Bacco, a super-Tuscan red—and the fact that the winery puts a limit on large groups and requires reservations.

This is all by design, explains Elizabeth Smith, who owns and operates the vineyard with her husband, Tony. “We all work hard to have these amazing products,” that are meant to be savored, she explains. “It’s not the party scene.” 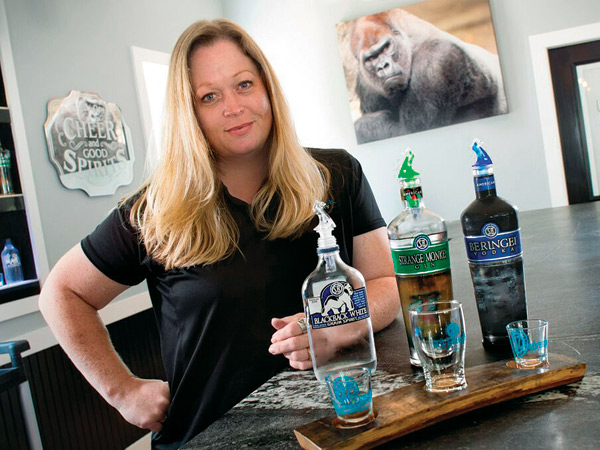 Really, it’s all about the ambiance. “We see ourselves as stewards of this area,” Smith continues. The businesses that make up Nelson 151 are currently fighting the proposed Atlantic Coast Pipeline, which would run natural gas lines through Nelson County, potentially disrupting the landscape and ecosystem.

Having taken in my share of the local offerings and unspoiled beauty, I do wonder what will happen as Nelson 151 rises in popularity. There’s already some tension in paradise between those who favor the party bus/bachelorette approach to luring clientele and winemakers like the Smiths who hope to cater to more discriminating palates and, perhaps, deeper pockets. Many proprietors bristle upon hearing their neck of the woods referred to as “Alcohol Alley,” a dubious nickname they would prefer to lose.

Come midday, it is something of a mob scene at the popular Veritas Vineyard & Winery up the road, complete with stretch limos and buses. With at least 10 people in line ahead of me and more groups pouring in, I decide it’s not worth my wait. I’ll try them again on a weekday.

As I head back toward Arlington with a stash of Dragon’s Breath mead, Strange Monkey gin and Flying Fox Vineyard’s Cabernet Franc (yet another good find), I envision myself suavely sharing these libations with friends while telling the story of how I met their makers. Good stories and booze often go hand-in-hand. 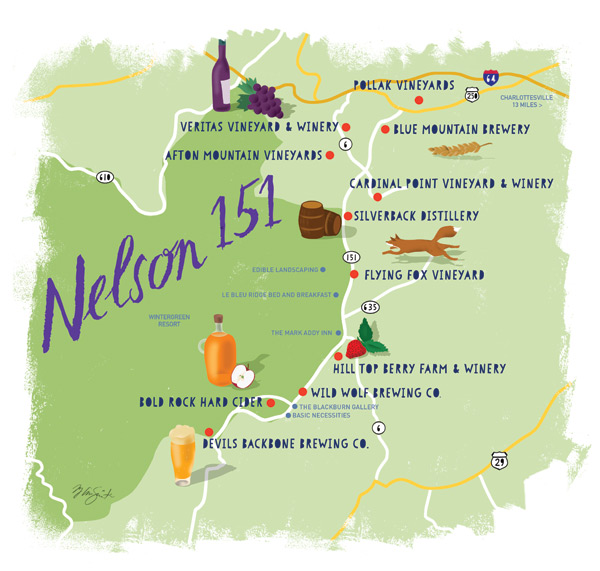 For less than $10, a beer flight brings 10 different suds, from pale ale to porter, in 2.5-oz. pours. Pair them with a brat or sausage and sauerkraut for lunch. The brewpub menu also includes kid-friendly and gluten-free options, plus a tasty kombucha tea for nondrinkers. Free brewery tours offered noon to 4 p.m. on Saturdays. 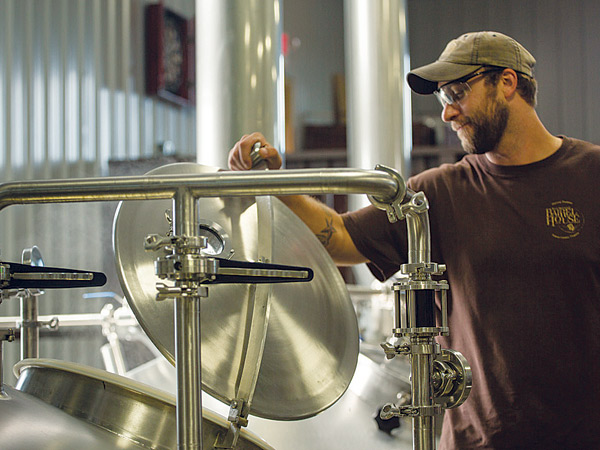 A stopping point for artisanal cheeses, olives and other organic provisions, this charming market-café serves takeout or eat-in breakfast and lunch most days, plus dinner on Friday and Saturday. Reservations recommended.

Need a rest after a day of imbibing? At Cardinal, you can spend the night in a renovated 19th-century farmhouse with beautiful vineyard and mountain views. The house offers five bedrooms, three full baths, a full kitchen, a screened side porch and a pool. Sleeps 10; rates average $586 per night.

Want to eat really local—as in grown in your own backyard? You’ll find a choice selection of fruit-bearing trees and bushes at this nursery, where Asian persimmons are a specialty. They ship bare root plants, too.

This small, friendly tasting room (the vineyard is down the road) is not to be missed, and a good place to stock up if you’re partial to Cabernet Franc or
Pinot Gris.

Housed in a beautiful old home, the inn offers antique-appointed rooms (including a few that are pet-friendly) and fine dining in a picturesque setting. $139 to $279 per night; check website for package deals.

Canine friends are welcome in brewmaster Danny Wolf’s biergarten, which is often hopping with live music and trivia nights. The brewpub even sells gourmet dog treats (aka “brewers biscuits”) made with spent grain from the brewing process.

Arlington writer Amy Brecount White found her immersion in Nelson 151 to be both spiritually and spirits-tually renewing.