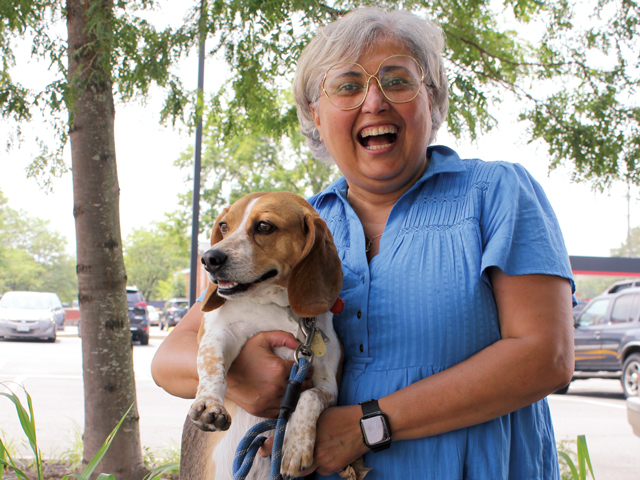 Daniel, who is a Coptic Christian, has faced other life challenges before. In 2004, she sought and received asylum in the U.S., leaving her friends and family—and support system—behind, for religious reasons. In 2007, after holding a series of jobs in the D.C. area, she became the director of donor relations for Coptic Orphans, an American-Egyptian nonprofit organization based in Fairfax that provides aid to orphaned Christian children in Egypt.

Six years later, the food truck tsunami took the Greater Washington area by storm, and with it came another calling. Daniel decided to introduce her culture to the American public through food, putting to use the culinary know-how she’d acquired from growing up around great food. “Extended family and friends were always delighted to get invited for dinner at our house,” she reminisces. She had also learned a thing or two from the chef of an upscale Lebanese restaurant she once owned in Cairo.
The executive director of Coptic Orphans thought she was crazy, questioning why, at 44, she would do something so risky. She told Daniel she’d hold her job open for six months.

But Daniel forged ahead. She tracked down a food truck company in Miami, flew there one weekend and put down a $10,000 deposit on an $85,000 truck. That Monday, she took a food manager course in D.C.

A friend picked her up from the Metro and said she looked ashen.

“I looked and felt terrible,” Daniel recalls. “Something was really wrong with me. My friend took me to her home and I broke down. I was crying. I couldn’t breathe. I thought I was having a heart attack.”

In the ER, her symptoms were diagnosed as acute anxiety. “Apparently, it was because of a lot of change in a very short period. When I saw the truck in Miami, it hit me—Am I able to do this? I always kept things bottled up and it came out as panic attack.”
She canceled the truck and lost her $10,000 deposit. A psychologist helped her work through her anxiety and fear of failure. So did Falafel, the 6-week-old beagle she adopted, now her faithful companion for the past six years. (For her Fava Pot truck, she ultimately bought a used one in Pennsylvania and had it outfitted in Manassas.)

When Covid-19 arrived with all its uncertainty, Daniel remembered the panic attack and how it felt as her empathy for her staff kicked in. “I feel responsibility toward them. I don’t want the atmosphere of the pandemic to be forcing anxiety,” she says. “That’s why it’s important we all do deliveries, so we won’t always be stuck inside. It helps keep minds fresh to be outside.”

The claim that “employees are just like family” is often a hollow one in the restaurant business. But with Daniel it rings true.

Two of her employees, Elmer Ramos and Cintia Lemus Ramos, have been with her since the food truck began in 2013. Elmer started off as a cook and helper; now he’s the restaurant’s sous-chef. Cintia was a cleaning lady; now she’s a chef supervisor and Elmer’s assistant. The couple met while working on the truck, married last year, and now have a 1-year-old son, Dylan Samuel.

Two other employees, Stephen Samuels and Ingres “Flor” Prada, have been working for Daniel since 2017. Samuels started as a cashier and is now an area manager, overseeing the Union Market operation. Prada, originally a dishwasher, is another chef supervisor. Sara Reyes, who came to the U.S. from El Salvador in 2018, joined the team eight months ago as dishwasher, and now works prep.

Daniel does not believe the relationships are coincidental. “This is God, 100 percent,” she says. “I’m alone here from Egypt and have no children. He has chosen for me these people of different backgrounds, different educations, different cultures, different everything. He gathered us to run a family business, even if we are not family by blood. If, at any point, I go to heaven, these are the people who will run the restaurant. I’m happy that they contributed to my success and my life and that God used me in their lives. It’s a very beautiful picture.”

She speaks of her staff with the adoration of a proud mother. She got to know Elmer as the two worked long hours, side by side, in the early days of the cramped food truck, hearing how he had suffered in his native El Salvador. “Even though he’s been through so much…he gives the benefit of the doubt to everyone. When my brother passed away, and then [later] my mom, I had to go to Egypt. On these two occasions, his eyes were red. He hugged me and said, ‘You go.’ ”

Samuels, whose family emigrated to the U.S. from Egypt when he was 5, was on the construction site, helping the contractor, when Daniel was building out Fava Pot in Falls Church. She noticed what a hard worker the 17-year-old was and told him to call if he ever wanted to get into the restaurant business. He emailed a week later.

“He is a very smart, responsible young guy. He told me he wants to go to college, but prefers community college to not overwhelm his parents with tuition. Then, after that, he will go to George Mason. I just fell in love with him and hired him. Now he is my left hand. Elmer is my right hand.”

Amid the pandemic, Daniel applied for the federal government’s Paycheck Protection Program and received $36,600 in May during the second round of funding. She used 25% of it for rent and the rest for payroll, meeting the government’s requirements to have the loan forgiven. Whereas many businesspeople have expressed frustration with the program, Daniel lauds it.

“I am in touch with other Egyptian-American business owners [she became an American citizen in 2015] and we all have a similar viewpoint—only in America do you find a government that supports small businesses and gives them forgivable loans during crises.”

She is moving ahead cautiously.

For now, her food truck is limiting its rounds to private functions and special occasions. Fava Pot Union Market reopened at the end of June, but only on weekends. The Rosslyn restaurant project is totally on hold.

She did not open her Falls Church eatery for indoor dining during Phase 2 or Phase 3, even though the governor’s order allowed it. “Now I’m able to operate with almost 50% of my income doing curbside pickup and delivery,” she says. “We will stick to that. If one of us gets sick, we will have to shut down, and I feel we deserve not to have another hit. I won’t put my staff and guests at risk and create more anxiety and stress.”

In June, Daniel started working out with a trainer to get back in shape and renew her mind.

“After I had that panic attack, I decided I will never let myself get to that point again,” she explains. “I’m not allowing any negativity around me. I’m not living in denial; I’m protecting myself and my staff. Even listening to a radio show, if people just want to say, ‘We’ve got problems! We’ve got problems!,’ I turn it off. I only listen to people saying ‘We’ve got problems’ if they are looking for solutions.”

Although she considers herself optimistic about the future, she’s reluctant to even think a week ahead.

“There might be a vaccine in four or five months, or it might be two years. I like to plan, but you can plan only if you have most of the elements under your control, and I don’t,” she says.

“Delivery and takeout are the only elements I can control; everything else is loose. If another wave comes and there is no PPP, how will we pay our rent, our personal bills? These are unknown things I’m not in control of, so I’m taking it one day at a time.”

For now, at least, there is koshary and táamya and hot aish baladi from the oven. And there is comfort in that.

David Hagedorn is the restaurant critic for Arlington Magazine and Bethesda Magazine. He is the co-author of several cookbooks, including Rasika: Flavors of India.