Remember the pearled and perfect June Cleaver, the all-American homemaker from the late-1950s TV staple Leave It to Beaver? Barcroft neighbors Heather Sheire and Leah Haskvitz are paying homage to all things June with their web-based baking business, Livin’ the Pie Life. The pair craft and deliver terrific sweet and savory pies to local homes and businesses dressed in vintage garb, right down to the apron and heels. They say the outfits mirror their concept.

“Pie comes from a timeless tradition of women baking fresh from scratch for their families. The dress symbolizes a simpler time when pies were homemade with real ingredients straight from the garden,” says Sheire, a mother of two and fan of the retro look.

Crusts are flaky and no butter is spared. In the sweet category, their top sellers are Kentucky Bourbon Chocolate Walnut, Oreo Chocolate Peanut Butter and Apple Caramel Crumb. Fruit pies made with produce from local farms are featured in summer months. Meanwhile, the savory selection includes a luscious Mac & Cheese Pie with Caramelized Onions and Bacon, as well as Asparagus Bacon Gruyere Egg (a 10-inch pie runs $25 to $35 and serves 10). There is a flat delivery fee of $5 to Arlington addresses, or $10 to Falls Church and McLean. Look for Livin’ the Pie Life at the Columbia Pike Farmers Market. 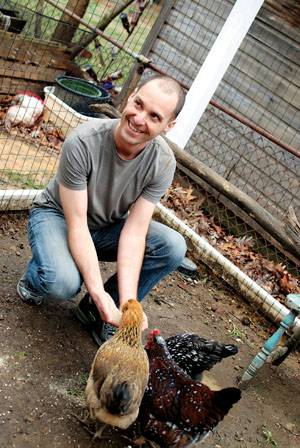 Bluemont resident Ed Fendley likes to know where his eggs come from. At some point, he’s hoping that organic source will be his own backyard. Fendley is one of several local citizens seeking to build a chicken coop on their property for three or four hens. His goal? To provide his family with the freshest eggs possible, and to help support the growing sustainable urban agriculture movement.

But he may need to wait a while for the omelet of his dreams. According to Fendley, it will be at least spring 2013 before the Arlington County Board considers a modification to existing zoning ordinances that prohibit most homeowners from keeping their own egg producers. (The current law requires a setback of 100 feet from coop to lot line, which effectively outlaws hens in yards of less than approximately 1 acre.)

To promote his agenda, Fendley co-founded the citizens group Arlington Egg Project, which advocates the benefits of “backyard to breakfast table.”

“I want the same freedom that people in America traditionally had,” says Fendley, a specialist at the U.S. Environmental Protection Agency’s Office of Sustainable Communities. “Families keeping backyard hens can help protect the environment from industrial-scale farming and the degradation of the Chesapeake Bay.” On a small scale, he says, the manure that hens produce can be easily composted and reused as fertilizer for gardens.

Plus, backyard chickens have other benefits, he contends. “We educate children about where food comes from, reduce household food costs, increase a sense of connection to the land, and improve family nutrition by shortening the farm-to-table time of the food we eat.”

Fendley says he appreciates the flavor of eggs from chickens that have had the opportunity to “scratch around and eat bugs and other good things, producing a great-tasting, healthier egg.”

But not all Arlingtonians are so keen on the idea of chickens as neighbors. As in other parts of the country where similar proposals are up for debate, opponents have expressed concerns about smells, noise, eyesores, disease and the possibility that chickens could attract predatory animals from the wild.

Still, the movement seems to be gaining some traction. More than 1,000 Arlington residents have signed the Egg Project’s petition, which asks the county board to not only modify the ordinance, but also “limit the number of hens, prohibit roosters and help secure proper and humane housing for hens.”