“Welcome to the pickle chamber,” says Yi Wah, guiding me into the chilly inner sanctum of Number 1 Sons, the 1,000-square-foot mini pickle factory he operates with his sister, Catlin Roberts, in Lyon Park. Since March of last year, the pair have been barrel-fermenting vegetables—principally cucumbers and cabbage, but also string beans, radishes and pearl onions—with water, salt and spices, producing an assortment of Old World-style condiments with plenty of tang.

Thick walls of high-density insulation guard against temperature fluctuations, and the acidity of each barrel’s contents is regularly monitored. “We guide the brine and create a great environment,” Wah says.

A former Marine and multitasking Washington-area restaurant worker, Wah confides that he came up with the idea for a pickle company “at a friend’s house while downing a bottle of bourbon.” Wouldn’t it be great to make some authentic dilly beans or fermented cucumbers? he thought. The name, Number 1 Sons, refers to the Chinese cultural tradition of maintaining high hopes and expectations for a first-born son.

Taking their craft seriously, Wah and Roberts eschew the popular practice of “quick pickling,” where vegetables are simply soaked in vinegar. “That’s salad in a jar,” Wah says. “For us, low and slow rules the roost.”

Instead, the krauts, cucumber pickles and kimchi they produce are similar to those found in a New York Jewish deli or a Korean root cellar. In place of vinegar, natural-forming lactic acid sours and preserves the goods. Half-sour pickles take a couple of days to ferment, while some krauts bathe in brine for as long as three months.

With locavores in mind, the duo is now building relationships with local farmers who grow vegetables specifically to their standards, with thinner skins and a sweeter taste. They concede that agricultural customization rarely lowers production costs. “We are not the cheapest pickle,” Wah says.

Not for the timid, their Kicky Kosher pickles ($10 for a quart-size container) are spicy-hot with a wallop of garlic flavor. The far mellower Stinkin’ Rye cabbage kraut ($4 for eight ounces) derives its flavor from caraway seeds and juniper berries. And don’t overlook the traditional Sons Kimchi ($7 for 12 ounces). It’s as good as red chili-fermented cabbage gets. 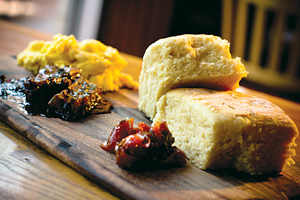 It was during a trip to Mary Lou’s Biscuit Bar in Louisville, Miss., that Will Artley, executive chef of Pizzeria Orso in Falls Church, says he found the inspiration for his new “Biscuit Board” brunch menu.

“Honestly, they make the best biscuits I’ve ever had,” says Artley, who was visiting his new in-laws at the time of this culinary discovery. “I had to ask them for the secret.”

Happy to oblige, the owner led Artley behind the scenes, past a telling “wall of stacked lard cans,” for a tutorial on how to turn out consistently flakey biscuits by adding ice-cold butter, cut into a small dice, and then smearing the flour into the mix just so. “I got all the pointers,” says Artley, the former executive chef at Evening Star Cafe in Alexandria.

The result is a clever menu expansion at Orso—a place best known for its traditional Neapolitan-style pizza baked in a wood-burning oven—that provides a similar satisfaction to building your own pie.

Three dollars gets you one flame-kissed buttermilk biscuit and a side of home fries, served on a wooden plank. Then, for an additional charge, brunch-goers can upgrade with one or more of 25 creative biscuit toppings, ranging from 50 cents to $3 each. Carnivores may give the nod to sausage gravy, lamb belly, fried chicken or bacon jam, while vegetarians can choose among toppers such as lemon jam, sautéed mushrooms, spinach or zucchini.

Heartened by the immediate success of his biscuit-baking venture, Artley, who has led the Orso kitchen since early last year, has also perfected recipes for his made-from-scratch sourdough waffles, English muffins and croissants.

Two Belles Southern Pound Cakes is a year-round operation, but September kicks off the busy season for its proprietor, Sharon Crow. In the next four months, the Yorktown resident will bake 600 to 700 of her Bundt-shaped cakes in 11 flavors for local sales and shipments across the country.

“It keeps me hopping,” says the Atlanta native, who rents kitchen space for her 4-year-old business at Memorial Baptist Church in Country Club Hills. Despite the “two” in the company name, it’s a one-woman show, with Crow fully in command.

Her most-requested cake is the Annemarie, a subtle blending of coconut, rum and almond flavors. “It has that unique factor,” she tells me, offering a sample. My favorites, however, are the less-sweet, butternut-flavored Mama Louise and the Effie Mae, a cream-cheese cake with chocolate chips.

Indubitably Southern, the cake names honor people who have influenced Crow’s life. An enclosed card with each cake tells their story, followed by a verse from Psalms. “I’m blessed to be able to make these cakes,” she says.