What Marymount University President Matt Shank learned after spending one cold winter night on the street. 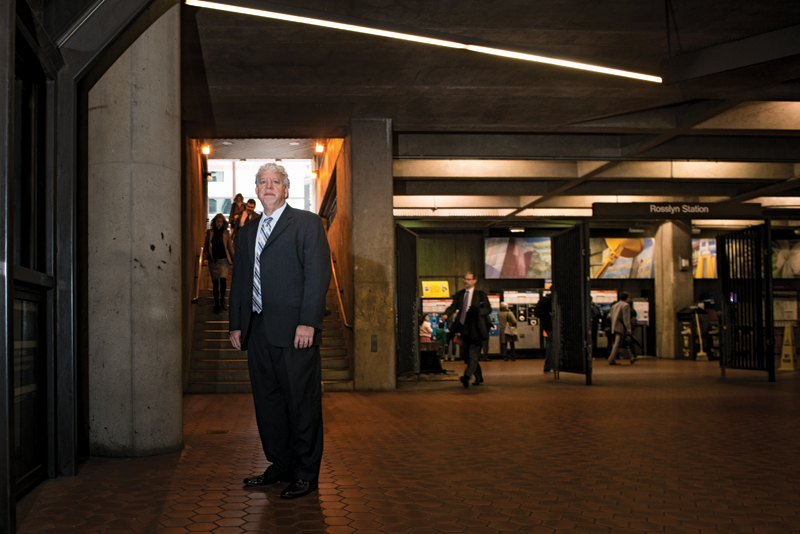 The author, standing near the spot where he spent the night at the Rosslyn Metro station.

On the evening of Feb. 25, 2016, I slipped out of my suit and tie in the president’s office at Marymount University and donned my oldest pair of jeans, some beat-up gym shoes and the warmest hoodie I could find. I grabbed a pair of gloves, an old backpack and a sleeping bag. And on that night, which I’ll never forget, I became homeless.

The impetus for this decision had come a few weeks earlier when A-SPAN president Kathy Sibert asked me to keynote her nonprofit’s annual breakfast fundraiser. After I accepted, it occurred to me that I didn’t know the first thing about what it felt like to be homeless in Arlington.

Pope Francis has called upon the world’s priests to bring healing to those in need, to stay close to the marginalized and to be “shepherds living with the smell of the sheep.” Now, to be clear, I am in no way comparing myself to a priest. But I was trying to act in the spirit of the pope’s words. How could I talk about homelessness and understand the needs of this population without experiencing what it felt like to be in their shoes, even if only for one night?

I drove to Ballston, parked my car and headed over to Central United Methodist Church, where I had been told I could find a hot bowl of soup. But it was evident my timing was off when—much to my surprise and theirs—I walked in on a group of volunteers prepping a breakfast that was to be served the next day.

I was immediately greeted by Pastor Sarah Harrison-McQueen, who, in the first and only act of kindness I would experience all night, asked me where I was headed and whether I knew about the A-SPAN shelter. When I told her I was planning to walk down to the Rosslyn Metro, she offered me free Metro passes so I wouldn’t have to walk. I gratefully declined, at which point she offered me some fruit since I had no food. I hadn’t shaved in a few days and she had no idea who I was, even though I was tempted to blow my cover. I could tell she had a huge heart and cared about my well-being.

Accepting her gift of a banana, I headed out into the night air—a bone-chilling 25 degrees and windy—and began my 3-mile trek to Rosslyn. Suddenly I felt overwhelmed by loneliness. I knew in my mind that I had a house, great friends, a loving family and wonderful colleagues and that my plight was self-imposed and temporary. But in that moment, I felt like I had nowhere to go and no one who cared.

As I walked the streets, a couple of things happened. Pedestrians in my path seemed to veer as far away as possible. (Maybe it was me, but it seemed like a few even crossed the street to avoid me.) Passing by several bars and restaurants, I found myself for the first time on the outside looking in, separated by more than glass as I peered in at smiling, warm, well-dressed people who were laughing over glasses of wine and bourbon. Meanwhile, I was thinking about where I might sleep.

I’d heard there were two main gathering spots for homeless people in Rosslyn. One was just outside the Arlington Temple United Methodist Church (which sits on top of a gas station and has been referred to as “Our Lady of the Gas Pump”). The other was inside the breezeway at the Rosslyn Metro station. I figured I’d check out both places and then decide where to hunker down.

As I approached the church, I noticed that the lights were on. The church door was open, and inside a men’s choir was practicing. I’m not sure who they were, but they were magnificent. I decided to sit in the back pew and listen to those heavenly voices for as long as I could until someone kicked me out.

After about 30 minutes the choir took a break. To my surprise, every person walked right past me as if I were invisible. No one looked at me, and no one spoke to me. It was the same pattern of avoidance I’d encountered on the street. (The only person who had made physical contact with me all night was a guy handing out Bernie Sanders pamphlets.)

Outside the church, I saw only one homeless woman, so I thought I’d better check out the Metro. It seemed the better choice, given the steady flow of people moving in and out of the station and the fact that it offered shelter. Plus, I noticed four or five other homeless people had already settled in there for the night.

I staked out a spot around 9 p.m., sat against a wall and waited—although what I was waiting for was unclear. Someone to talk to me? Someone to offer help? None of those things happened. One young man exiting the station gave me a head nod and a warm smile that made me feel like he cared, but he didn’t stop to chat.

Metro finally closed and locked its doors at midnight. That’s when things got quiet—almost. There was a construction project farther down in the station that ramped up once the turnstiles closed, so the lights remained on, the sounds of voices and machinery echoing off the concrete. I will never forget the chill of the wind whipping through the station and the cold floor that I was using as a bed. The night seemed to last forever.

After dozing on and off for several hours I woke around 5:30 a.m. and paid a visit to a public restroom that had just opened in an adjacent building. (By the way, I have never been so happy to see a public restroom since everything was locked all evening.) Then I started my walk back to Ballston for the Friday morning breakfast at Central United Methodist Church.

When I got to the church, I spotted eight or nine homeless men at a table and asked if they would mind if I joined them. Their reply: “Yeah, we mind.”

I ate breakfast alone, thanked the volunteers and headed for my car.

A short time later I was home, blindsided by another wave of emotion. It wasn’t relief. Feelings of guilt overwhelmed me as I walked into my big house with its full pantry of food, hot shower and warm, soft beds. Why did I deserve to have all of this? What had I really done to help those people on the street and those men at the breakfast table who had nowhere to go? The awful answer was that I hadn’t done a thing.

But now I’m ready to change that, by asking A-SPAN how I can help. I saw enough in one night to know that we need to do something, even as Arlington’s homeless population is dwindling (it’s fallen 64 percent since 2013). One person on the street is still too many.

Matt Shank is president of Marymount University in Arlington.