How Do You Keep Kids in School? Ask a Former Dropout.

Bill Milliken's Communities in Schools has kept more than 1.5 million students on the right track. 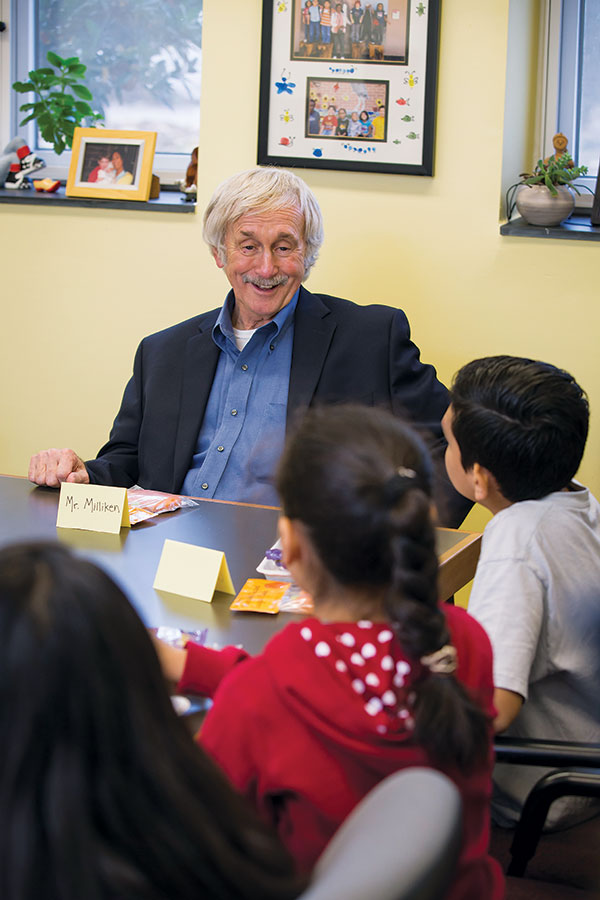 Hanging out with students at Barcroft Elementary School. Photo by Erick Gibson

Search Bill Milliken’s name on YouTube and you’ll find no shortage of clips.Sometimes there’s a podium, a tux and an impressive intro. Other times the 76-year-old education advocate is sporting an open collar with a handheld mic, roaming the stage, engaging his audience.

But no matter the setting, Milliken’s voice remains the same. Low and steady. Relaxed but focused. He has a knack for turning even the largest hall into a casual conversation—about school, hardship and what young people need to succeed.

It’s a dialogue that’s been ongoing for more than 50 years, from the time the activist wore shaggy, hippie hair and a full beard to today’s pepper-grey mustache and shorter crop.

Long before we heard that it takes a village to raise a child, Milliken was mobilizing local communities to create new pathways for underserved youth. His goal: to counteract what was then a rising high school dropout rate nationwide.

The nonprofit he founded, Communities in Schools (CIS), is as much a philosophy as it is a grassroots network. CIS brings community resources—from counselors and health care providers to business support and role models—inside public schools to give students the scaffolding they need to flourish.

“It’s relationships, not programs, that change children,” Milliken is apt to say. “A great program simply creates the environment for healthy relationships to form between adults and children. Young people thrive when adults care about them on a one-to-one level and when they also have a sense of belonging to a caring community.”

Milliken’s own story starts in Pittsburgh, where his father owned a small brickmaking company and his mother stayed home with the kids. School was never easy for Milliken, who often found himself on the outside looking in, struggling with undiagnosed dyslexia.

“They didn’t know about learning differences back then,” he says. “You live your whole life thinking you’re stupid.”

So he dropped out of school and fell in with a crowd he describes as violent—more interested in petty crime than homework. But then he had a chance meeting with a volunteer for the ecumenical youth organization Young Life, who urged him to rethink his future. Milliken started attending Young Life camp. In the process, he says, he gained confidence. And a high school diploma.

“He was going to be my friend whether I accepted what he was talking about or not,” Milliken says of the volunteer who pulled him away from influences that could have led to jail or worse. “It took a long time, but it put me on a path where it gave me hope. It saved my life.”

That path led Milliken straight to Harlem in 1960. He was 20 years old and imagined himself starting programs in urban settings similar to those run by Young Life. He knew he had a talent in “hanging out”—relating to kids on the streets in a way that transcended race, age or lifestyle.

In Harlem, he began living in a tenement house with 35 youths he was working with on behalf of Young Life. The focus wasn’t always on school. He realized he had to get the kids “turned on to living”—battling challenges like homelessness, drug addiction and gang involvement—before he could start talking to them about learning.

“It was hard but also a challenge,” Jean says of her move to New York. Though the change meant leaving her childhood home, she was energized by the chance to join her husband in making a difference. “You learned to focus on what was universally true [about people from all walks of life].”

Milliken eventually organized those truths—takeaways he’d distilled from his work—into a manifesto of sorts. For kids who were struggling, the path to success seemed to hinge on a few fundamentals: creating a one-on-one relationship with a caring adult; establishing a safe place to learn; creating a healthy life with basic nutrition and medical care; learning a marketable skill to use after graduation; and getting the chance to give back to the community.

In the 1970s, those lessons would come to be known as the Five Basics and would serve as the founding principles of Communities in Schools. The nonprofit started out working in schools in New York and Atlanta. Today it serves more than 1.5 million students at 2,300 sites across the United States.

By 1983, the Millikens had two young children (a third would come later). They moved to Arlington to be closer to education policymakers in Washington and to take advantage of Arlington’s good schools. Soon, the man known for his “hanging out” talent was authoring books—four in all, including The Last Dropout, with a foreword by President Jimmy Carter and Rosalynn Carter—and serving as an adviser to three presidential administrations.

Milliken stepped down as president of Communities in Schools in 2004, but he’ll be the first to say his work isn’t done. He now serves as vice chairman of the CIS board of directors, and he still visits CIS sites across the country, relishing every chance to interact with young people, face-to-face. He also serves as president of LeaderComm, an Alexandria-based organization dedicated to helping local leaders leverage and maximize community resources.

“He’s very empowering to the people that he’s with,” says Patrick Brennan, executive director of CIS in Northern Virginia. “He’s got that intangible thing that people pay attention to.”

On a recent site visit to a high school in Arlington, Milliken was in his element, sitting with students, listening and—naturally—just hanging out. There may have been 60 years separating them, but he was unfazed by the age gap.

“That’s my passion,” he says. “The hardest thing I did was leave the streets. If you center on relationships and are honest and consistent, it doesn’t matter whether the person is my age or a kid or a millennial. We all have the same needs, and we all get insecure.”

Today, the high school dropout rate hovers around 6.5 percent nationwide, down from 17 percent in 1967, according to the National Center for Education Statistics.

In 2009, Milliken received the National Jefferson Award for Outstanding Public Service Benefiting the Disadvantaged—an honor he shares with Bill and Melinda Gates, Eunice Shriver, Paul Newman, Betty Ford and others.

The accolades still come as a surprise to a man who never finished college. (Though he did go back to earn his high school diploma, he tried freshman year twice at the University of Pittsburgh and once at New York University, but ultimately decided that college wasn’t his thing.) To this day, he says he still learns more by talking and absorbing from those around him than he does from books.

“God has a great sense of humor having me involved in education,” Milliken says.

For now, he shrugs off questions about a second retirement.

“I try to get him to talk about it,” his wife confides. “But he says, ‘There’s no retirement in the kingdom of God.’ I think he will work—whatever that means—until he drops. He’ll never go play golf.”

Emily Van Zandt is a writer who lives in Alexandria.