Is My Child Gifted?

The struggle to identify and serve advanced students in the age of competitive parenting. 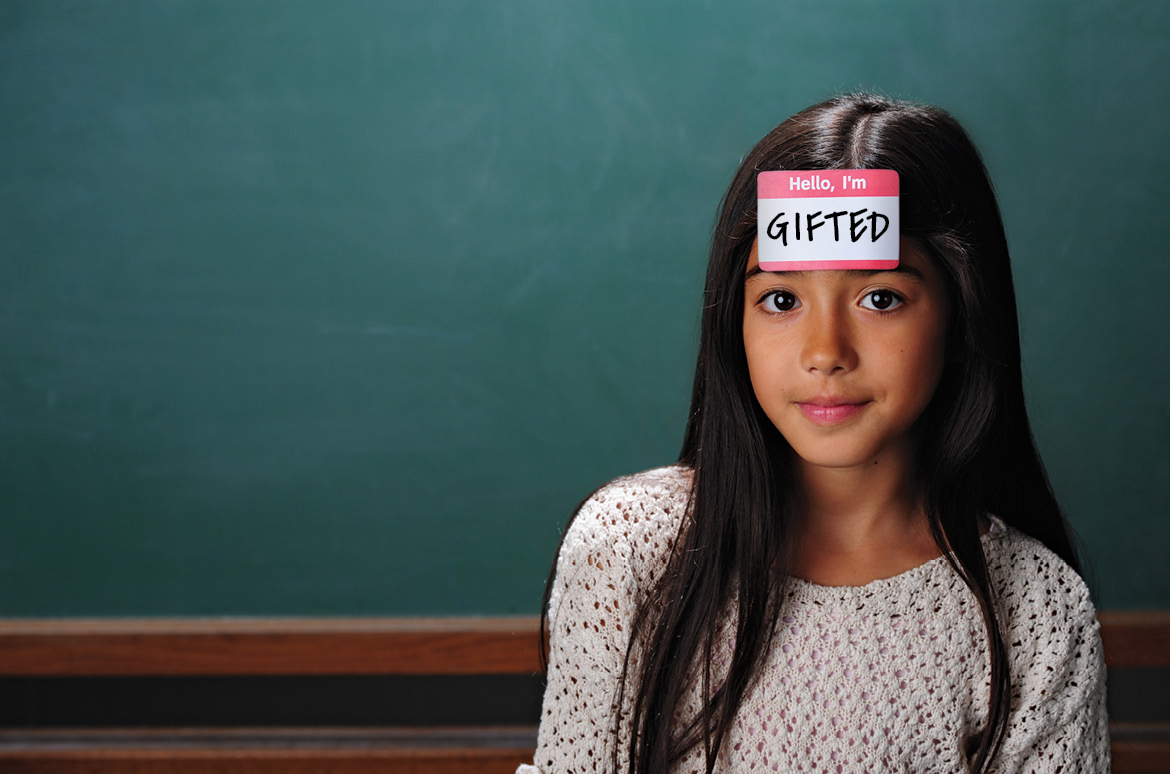 At age 4, Parker Walsh* understood more about subatomic particles than most adults ever will. This was evident the day he engaged his nursery school teacher in an in-depth conversation about supercolliders. By the time he entered first grade at Arlington Science Focus School in 2009, Parker was able to explain DNA and gravity and was having passionate debates about the Big Bang Theory. At age 7, he developed his own language, complete with its own writing system and mathematical symbols. When his parents took him for an independent intelligence assessment a year later, his test scores on the Wechsler Intelligence Scale for Children placed him in the “highly gifted” range—above the 99.9th percentile nationwide.

People like Parker who are gifted with a capital G—as in genius level—make up about 2 percent of the human population. At least that’s the general consensus among psychologists and academics. Admission to Mensa requires an IQ score in the 98th percentile, and kids who test above the 99.9th percentile qualify for the Davidson Institute’s Young Scholars program, a free national program for the “extremely gifted.”

How do you know if your child is a candidate for gifted instruction? Test scores, not surprisingly, are a factor. Virginia schools use nationally normed tests such as the Naglieri Nonverbal Ability Test (NNAT) and the Cognitive Abilities Test (CogAT) to assess students’ critical, analytical and creative thinking skills, and identify those who might benefit from taking it up a notch. (The grade level at which these screenings are administered varies by school district.)

But test scores aren’t the only criteria that come into play. There are also un-testable qualities, such as a student’s ability to hyper-focus on a particular topic, make unusual connections, take initiative in creative problem solving or comprehend sophisticated humor. Sometimes signs of higher intellect are spotted by an observant teacher. Other times, parents initiate a conversation and ask school officials for a formal assessment.

Cheryl McCullough, the gifted services supervisor for Arlington Public Schools (APS) and president of the Virginia Association for the Gifted, describes the identification process as holistic: “I want to know more than just data points. I want to know how this child is thinking critically and creatively at a higher level.”

Even the National Association for Gifted Children in Washington, D.C., is equivocal in its definition: “Giftedness, intelligence, and talent are fluid concepts and may look different in different contexts and cultures,” the nonprofit says on its website. “Even within schools you will find a range of beliefs about the word ‘gifted,’ which has become a term with multiple meanings and much nuance.”

Arlington resident Lara Doyle remembers being pleased when her son Ben was formally identified as gifted during his first-grade year at K.W. Barrett Elementary. “He’s always asked a lot of questions and really wanted to understand complex things in a deep way,” she says, noting that Ben was already reading graphic novels about the major world wars and asking questions about geopolitics at age 6. “He wanted to talk to me about them all day, and I was like, ‘Ugh, I just want to go to bed,’ ” she jokes.

But not all parents have the same reaction when that letter comes home. Michelle Evans* says she was surprised when her daughter was flagged for gifted evaluation at the end of her kindergarten year at Arlington Science Focus. Though Evans agreed to have her daughter evaluated, she declined the offer to have her child skip a grade. “There’s no way she would have been mature enough to handle that,” Evans says. “She may be an early reader and a good student, but gifted is an overstatement.”

Evans isn’t the only one who feels the label is prone to hyperbole.  “The idea that everyone is gifted is a beautiful sentiment, but a fundamental misunderstanding of what gifted education is designed to do,” says Beth Green, Falls Church City Public Schools enrichment coordinator for grades K-2. “It means you have needs that aren’t being met within your classroom. It does a disservice to the kids who are truly gifted to say, ‘Oh, everyone is gifted.’ ”

Other educators take a similar view. “I was out at dinner with a bunch of girlfriends last week,” says an APS employee who asked not to be identified, “and every single mom at that table had a kid in gifted services. I know their kids—they’re lovely, but they’re not all gifted.”

The student who is truly gifted isn’t always as conspicuous as one might expect. The girl who sits in the front of the class and raises her hand for every question may be driven, but is not necessarily gifted—whereas the one who calls no attention to herself but is silently bored out of her mind is often the one who would most benefit from an accelerated curriculum.

“Gifted kids do not always present in the classroom as the smartest, most eager learners,” Catherine Brighton, an associate dean in the University of Virginia’s Curry School of Education, observed in a recent article in the school’s daily online news bulletin, UVAToday. Armed with a $400,000 grant from the U.S. Dept. of Education, Brighton and her colleagues are researching disparities in gifted identification, particularly among minorities, through a project called “Kaleidoscope.”

“Very bright children are often bored in traditional public school settings,” she added. “This boredom can manifest in gifted students as off-task behaviors, disengagement with the learning or general school apathy.”

Nancy Sharkey, an Arlington parent who holds a doctorate degree in education from Harvard, says there’s a well-documented Pygmalion effect at play in our nation’s public schools: “The kids who show up well dressed and know how to read get more attention and are clustered in the smart math group; the kids who don’t fit the part get put in the back of the class.”

Sharkey says she’s watched this disparity play out in her own two sons, who are entering sixth and eighth grade, respectively, this fall. Though their standardized test scores have been mostly identical at each grade marker, her older son was quickly identified as gifted in four subjects while the younger one was not. It wasn’t until the end of her younger son’s  fifth-grade year (after he performed well in a higher intensity math class) that he was pegged as gifted in math.

“Schools identify kids who are intrinsically motivated—the kids who are very demonstrative about their abilities,” Sharkey says. “My younger son is the kind of laid-back kid who floats to wherever the expectation is. It’s almost more important to identify the kids who don’t raise their hands and say ‘Ooh ooh, me me’—because they won’t seek out the extra enrichment, whereas the self-directed kids of the world will. But at the end of the day, what my younger son would benefit from is more challenging material, not a label.”

In the age of competitive parenting, however, there are those who care plenty about the gifted label. It’s not uncommon to find parents petitioning schools to get their kids on the gifted track—the thinking being that their students’ talents have simply gone undetected, or that their kids will rise to the challenge if given the chance.

“Parents are pretty savvy,” says Ann Dolin, a former Fairfax County teacher and founder of EC Tutoring in Fairfax. “They realize if they lobby hard enough on the student’s behalf, [the student] will probably get in.”

Sometimes parent advocacy can shed light on the brilliant kid who is quietly flying under the radar. (After two years of regular classroom instruction at Arlington Science Focus, Parker Walsh was finally flagged for gifted instruction in math after his parents submitted his outside test results to the school. Another year went by before APS determined that he was also verbally gifted.)

But parental intervention can also backfire. “I’ve worked with parents who think that their children are struggling because they’re bored or uninspired, so they push their children into a gifted program,” Dolin says, “only to find that their child’s strengths aren’t what’s appreciated in the classroom.”

Patricia Velkoff, a clinical psychologist with decades of experience in Northern Virginia, says that pushing a student to the next level can be especially risky if his or her academic scores are only slightly north of average.

“Children who perform near the bottom of the GT [gifted and talented] peer group are truly not well served by GT and AAP programs,” Velkoff cautions. “These children struggle—and sometimes fail—to keep up. Their belief in their own intelligence can suffer,” whereas the same kids would feel “highly competent” in a general classroom setting.

Being identified as gifted can also have social consequences, especially if a student is moved away from his long-standing peer group and forced to adjust to a new classroom, or even—as is the case for certain Fairfax County AAP students—an entirely new school.

“Some children suffer socially,” Velkoff says. “Established friendships become difficult to maintain, simply due to a lack of contact and shared experiences. The [former] peer group may also have a belief that GT children look down on them.”

That’s partly what happened to Jason White*, now 27, who qualified for Haycock Elementary School’s advanced academics (then known as GT) program in the late 1990s.

“GT is socially isolating,” says Jason’s mom, Rebecca*, recalling how her son’s switch to GT exacted a sudden and dramatic shift in his social circles. “He grew up with these kids who were his best friends. [Once he moved to GT] he could physically see them in school but couldn’t interact with them. It was like he was on the outside looking in. No one tells you in advance about the incidence of depression in kids who are in the program.”

Jason came home from his first day of third grade in the GT program and couldn’t sleep. Then he started having nightmares. “In retrospect, I think it was because he went from 0 to 60, from [being] a smart kid among peers to a place where he was struggling just to keep up,” his mom says.

With the help of tutors and a therapist, Jason stuck with the GT program and made it through Longfellow Middle School with a B average. When he got to McLean High School he was diagnosed with an emotional disability that nearly caused him to unravel. He pared down his course load, graduated on time, went on to earn a master’s degree in psychology and now teaches at a charter school in D.C. But he can’t say he’d do it all again the same way.

“The GT program was good for some people, but I have ADHD, anxiety and probably some other learning disabilities,” Jason says. “It made me feel like an idiot and a failure for not being able to do what the other students did. I became very self-conscious and developed social anxiety. And yet I was always pretty ebullient. I hid it well from teachers and counselors for the most part, so I just got lumped into the ‘lazy/oppositional’ pile.

“I think the program and its proponents meant well,” he says, “but at the end of the day it is another iteration of the do-do-do-achieve-achieve-achieve mentality of the affluent D.C. suburbs, where the value of doing well replaces being well. It’s a thresher.”