About That Amazon Move: 9 Questions with Katie Cristol

The Arlington County board chair discusses implications for local housing, schools, transit and the county budget. 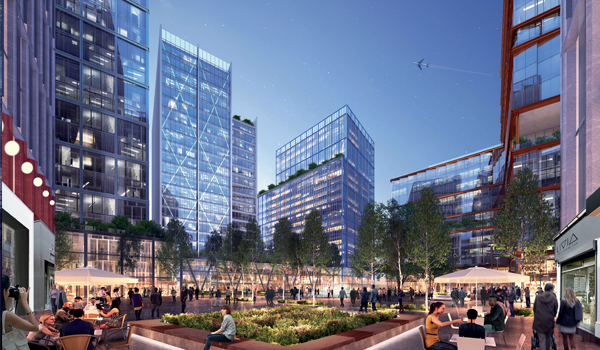 A rendering of Amazon’s new home at National Landing

On Tuesday, Amazon announced that it is splitting its highly anticipated HQ2 between two locations: Long Island City and Northern Virginia, where the newly-designated “National Landing” will encompass parts of Crystal City, Pentagon City and Potomac Yard. What does this all mean for Arlington? How will local officials handle an influx of 25,000 workers? And where the heck did the name National Landing come from? We asked the county board chair.

The news of Amazon’s arrival has been met with both excitement and trepidation. Why is this a good thing for Arlington?

We have had significant office vacancies, caused primarily by BRAC (the Base Realignment and Closure announced in 2005). That problem has created a real challenge for our ongoing operating budget here in Arlington County.  We have a lot of vacant office space in Crystal City and that’s led to lower [tax] revenue on the commercial side, causing a significant budget crunch. This represents one of the most significant achievements in addressing that budget gap in recent years.

You and County Manager Mark Schwartz have both said—prior to the big announcement—that even if Amazon lands here, it will not solve the budget gap for this coming fiscal year (2020) nor, likely, in 2021. So what are the short-term budget implications?

[Tuesday’s] announcement goes a long way towards fixing the long run structural problem and budget gap, but it doesn’t get us out of the woods of trying to solve the deficit this upcoming year. Arlingtonians should still expect a potential loss of services and potential tax increases in 2020. I wish this was a silver bullet that would preempt us having this difficult budget conversation. Unfortunately, it is not.

Initially, Amazon was going to pick one city as the site of its second headquarters and 50,000 employees. Now the deal is split between two cities, and so are those jobs. Are you satisfied that Arlington is getting 25,000 jobs, as opposed to 50,000?

There are trade-offs; 50,000 would have occupied more office space, but 25,000 gives us some room to grow and attract other businesses here. It will also give us an easier time absorbing the new workforce and mitigating any impact that folks are concerned about in terms of the housing market and beyond.

Ever since Arlington landed on Amazon’s short list, residents have worried that its arrival could drive up home prices and further diminish Arlington’s already depleted affordable housing stock. What is the county planning to do to alleviate these concerns?

First of all, Amazon didn’t bring an affordable housing problem. We already had one. Adding 25,000 jobs over 10 years is not going to help the underlying issues, but it’s not going to fundamentally change them, either. This should supercharge our efforts to create more affordable units. Our biggest challenge has always been the high cost of acquiring land and development. The Crystal City sector plan (adopted in 2010) does call for 1,000 more units of housing, so we’ve planned for that. I do think that Amazon coming here could be the precipitating event that forces not just us, but the entire region, to tackle the affordable housing problem now.

What about affordable rent?

I worry about the rental side. We have very few tools [at the county level] in controlling speculation. I’ve already heard stories about landlords in Crystal City sending notices to renters that they intend to raise rents by a couple hundred dollars a month. We can try to address that in the long-term by adding more housing to the market and connecting people to affordable housing opportunities since we don’t have tools like rent control. There will have to be public-private conversations. But there’s not much we can do to intervene in the short term.

Several new schools are being built to accommodate Arlington’s student population growth. How will the county manage even more students?

A job doesn’t create students. A housing unit or a family generates students. Our highest estimates are that 15 to 20 percent (4,000 to 5,000) of these Amazon employees will live in Arlington County. Knowing what we know about demographics, we anticipate that’s between 80 and 100 more students (from pre-K to 12th grade) per year, and that’s at the high peak. Another way to look at it is two to three more kids per school per year. That’s not nothing, but we think it’s manageable. Information on how we arrived at these projections is publicly available and I know there’s some skepticism around them. I think the most important thing for our schools is that the increasing tax base coming from [Amazon] could bring up to $360 million over 16 years, of which 46 percent will go to our schools. Our estimates could prove to be off, but even under the most extreme scenarios [that additional revenue] will more than supplement [the increase in student population]. I really think this is going to be a net benefit for Arlington County Public Schools.

You said in an NPR interview that public transit in Crystal City is “hungry for more riders.” What did you mean by that?

We are considerably down in the number of employees in Crystal City from even a decade ago. Crystal City and Pentagon City [Metro] ridership, as measured by entrances and exits, is down 29 percent since 2010. We have a transit system that’s under capacity right now. As ridership has gone down, public subsidies have had to increase and put greater pressure on our local budget. We estimate that between the Metro rail, bus and the ART bus system in Crystal City, [our transit infrastructure] can accommodate between 50,000 and 70,000 more weekday trips.

County press releases have noted funding for several infrastructure projects, like Metro station improvements and a pedestrian bridge from Crystal City to Reagan National Airport. Were these put in motion at Amazon’s request, or were they projects already in the works that became part of the Amazon deal?

That gets into the dynamics of the deal…but most of it wasn’t new; they were projects the board already endorsed and voted on. What is new is that there are now state funds available for most of those projects, and that will speed things up.

Let’s talk about the name “National Landing.” We know it was coined by economic development officials from Arlington and Alexandria, as well as developer JBG Smith. Where did the name come from and why?

It was a way to brand an otherwise unwieldy name: “The Crystal City, Pentagon City, Potomac Yard joint proposal of Alexandria City and Arlington County” [laughs]. But it will absolutely not be replacing our neighborhood identities in Crystal City, Pentagon City or Potomac Yard. Crystal City is not going away. This is not a formal renaming and there wasn’t the normal political process or community engagement that comes with that. I’m very attached to that name myself, having briefly lived in Crystal City. We are definitely not renaming it.