Today, Sharon relieves her MS symptoms with a grab bag of THC and CBD products. She smokes marijuana to combat seizures and sleep soundly, drops CBD oil under her tongue to fight inflammation, smokes Pure Hemp sticks to calm down and rubs THC oil into her shoulders to increase range of motion.

“I’m driving again. I have parties. I’m exercising. I am living better through no Big-Pharma chemistry.”

Matthew Mintz isn’t surprised. A Bethesda-based, board-certified internist, he recommends cannabinoids to treat many of the ailments that plague his older patients.

“As a medicine, cannabis has a very big safety/efficacy profile,” Mintz says. “It’s very easy to overdose and die on narcotics. But you cannot die from a cannabis overdose.”

Mintz, who is certified in Maryland and D.C. to “recommend medical cannabis,” doesn’t think smoking anything is healthy. And recent headlines tying vaping to an outbreak of severe respiratory illnesses have raised questions about the safety of vaping THC or CBD oils. He recommends marijuana capsules, concentrates and edibles—remedies that bypass the lungs—for seniors suffering pain, anxiety and insomnia.

“Why would I give an 85-year-old woman a prescription for Ambien, when medical cannabis is just as, or more effective?” Mintz says. Long-term Ambien use can cause digestive problems, chronic fatigue and headaches. “If you take Advil or Aleve for pain, you can get bleeding ulcers and strokes. Cannabis helps very well with aches and pains, and it doesn’t have those toxicities.”

Plus, cannabis has few negative interactions with other medicines, he says, and seniors typically take a raft of pills with their morning OJ. “Canna is safe and effective. I think it’s a very good option, especially for seniors.”

Mintz is also a fan of CBD products, which are nonintoxicating and were recently legalized by the 2018 federal farm bill, to treat certain maladies that come with aging. Today, you see CBD gummies, drops and drinks in chain drugstores, Bed Bath & Beyond, and even The Organic Butcher in McLean, which sells drinkable CBD shots next to its bison burgers.

One problem with CBD, though, is that it’s not regulated. Consumers generally can’t know how much CBD, if any, is in the products they’re buying. A 2017 study published in the Journal of the American Medical Association found that “nearly 70 percent of all cannabidiol products sold online are either over or under labeled.” Thirteen of the 84 products tested contained more THC than the legal trace amounts. 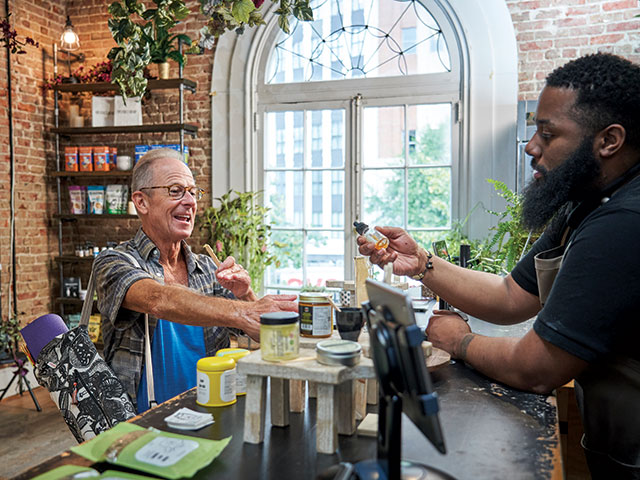 In December, Northern Virginia’s first medical marijuana operation will open in Manassas, one of five that the state legislature OK’d throughout Virginia in 2018.

Until then, local seniors are scoring weed any way we can. We’re hitting up friends, paying dealers, even smuggling home THC products in suitcases after visiting Las Vegas and Denver, where recreational marijuana use is legal.

We’re also crossing the Potomac and buying it in D.C., which has a burgeoning “gray market” for marijuana. It’s sold by pop-up vendors and stores that “gift” you a baggie of weed when you pay $40 for, say, a T-shirt.

CBD, meanwhile, is everywhere, now. But before cannabinoids became widely available, District Hemp Botanicals in Manassas, which opened in 2017, was the best-known place in the area to buy CBD products. Today, the business has expanded to sites in Leesburg and Dupont Circle.

District Hemp customers—30 to 40 percent of whom are seniors—“don’t want to see bongs everywhere,” says owner Barbara Biddle, 26. “I wanted to create an environment that’s comfortable for everybody.”

Biddle says senior first-timers ask a lot of questions. Their gateway CBD product typically is a $30 jar of Livity Salve, a lemon-scented balm with 200 mg of CBD that claims to benefit everything from pain to acne. From there, converts progress to CBD oils, edibles and capsules, spending $50 or more each shopping trip. “Some people like to stock up,” Biddle says.