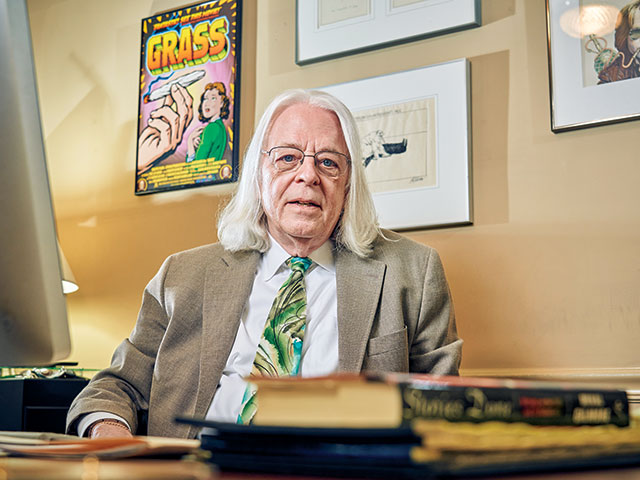 Keith Stroup, an advocate for legalization, in his home office. Photo by Erick Gibson

Keith Stroup’s white hair falls softly to the shoulders of his navy-blue blazer, which he pairs with a white shirt, floral tie and jeans for our interview in his home office in a leafy part of Falls Church. I’m here to talk with the NORML founder about the risks seniors take buying and using marijuana in states like Virginia, where weed is still illegal.

Stroup happily—almost gleefully—recounts the time he was busted for marijuana possession when he was a young man of 64. He had been attending the Boston Freedom rally to protest marijuana prohibition when he and a pal, High Times magazine editor Rick Cusick, ducked behind their trade booth and shared a joint.

“Halfway through, two guys—undercover cops—come running down the hill. We’re old guys, both white-haired. But one grabbed me by the collar, the other one grabbed Rick, and they took us to a booking tent. Then they saw our badges and realized we’re rally speakers.”

What the undercover officers didn’t realize was they had collared two world-famous cannabis activists with a battalion of lawyers at their disposal and a flare for drama. A bench judge told the codgers to pay a fine and move along. An assignment judge said forget the fine, dismiss the charges and please go away.

But Butch and Sundance wanted a jury trial with its attendant publicity. They got it, and were ultimately convicted of possession. Their sentence was no jail, no fine, no probation—no punishment. Within a year, Massachusetts decriminalized possession of small amounts of pot in 2008.

Today, Stroup is more discreet when he smokes weed.

“None of us wants to go to jail. And Virginia is still a state that takes a fairly harsh view of marijuana offenses,” he says.

Virginia, in fact, is in a dither about marijuana. As more and more states decriminalize or legalize its use, Virginia’s GOP-controlled legislature has grown hesitant to throw marijuana users in jail.

But the legislature isn’t in the business of giving up power. And its Courts of Justice committees want to maintain prosecutorial rights, the biggest obstacle between Virginians and legal pot, says NORML’s Pedini. “These criminal reform bills die along party lines,” Pedini says.

As of this printing, first-time marijuana possession offenders in Virginia can be sentenced to up to 30 days in jail and hit with up to a $500 fine. Repeat offenders can pull up to a year in jail and up to a $2,500 fine.

Virginia, however, has begun the long crawl toward marijuana legalization, which typically starts with decriminalization, then grudgingly accepts some medical marijuana regulation, and eventually concedes to recreational use.

Although the state hasn’t officially decriminalized marijuana possession, Arlington County police are loath to arrest seniors or anyone else for possession, unless it’s found while investigating a larger crime.

That’s a change since 2018, when Arlington County arrests for marijuana possession included 14 people ages 50 to 60, and four people ages 61 to 70, according to statistics obtained by Arlington Magazine via a Freedom of Information request.

When the first medical marijuana facilities open in Virginia in December, seniors who obtain a doctor’s prescription will have an “affirmative defense” for possessing medical cannabis oil containing THC. That means if you’re arrested for possession and have a valid prescription, the judge can dismiss your case. It’s not decriminalization or legalization, but it’s a step.

Stroup hopes he lives long enough to see Virginia and the rest of the nation end marijuana prohibition. It’s about personal freedom, he says. For many seniors, it’s about more.

After our interview, Stroup sent me an email to clarify why, in his view, seniors are going to pot.

Retirees often have “time on their hands,” Stroup added, and fill it with walking the dog, weeding the garden or pounding a golf course.

“These mundane activities are far more enjoyable when one is high.”

Lisa Kaplan Gordon is a freelance writer living in McLean.