These mainstays and newcomers offer craft beer, snacks and fun close to home. 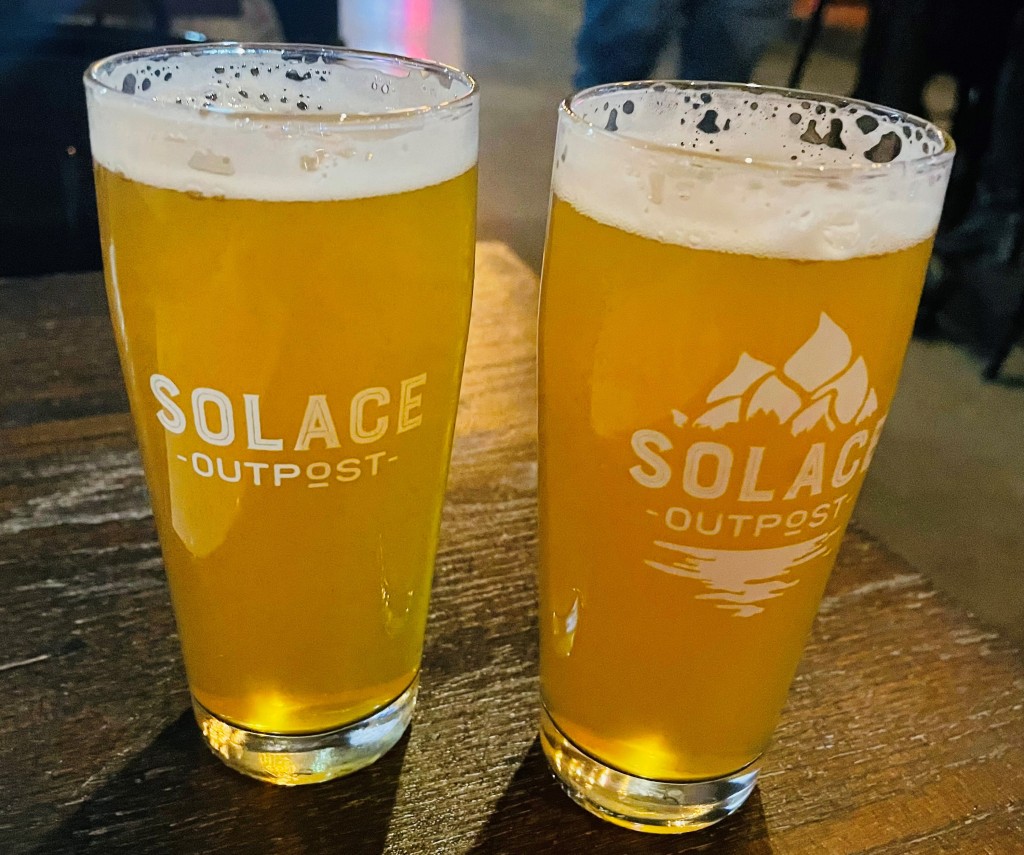 Virginia is loaded with options when it comes to craft beer, ranking 12th in the nation for total number of breweries in 2020. But you don’t need to travel to Norfolk, Richmond or Loudoun to sample some of the best beer the commonwealth has to offer. Within a short walk, bike ride or drive from any Arlington neighborhood, find these fantastic local breweries, all of which offer great beer and an equally good opportunity to socialize.

Nestled in a West End, Alexandria industrial park between two flooring stores, Aslin is a strong addition to the neighborhood. The Herndon-based brewery established an additional location there in 2019 with a mammoth taproom and adjoining gift shop sporting glassware, hats and tees. If you’re looking for a spot to watch the big game, or play some games yourself—Skee-Ball, Iron Maiden, the list goes on—this is the place. And as far as the beer goes, you may never run out of (cheekily named) options. That Shiz Slaps is a doppelbock with some heft. Power Moves is a reliable, citrusy India pale ale. And when in need of something positively saccharine, reach for With a Baseball Bat, an IPA with notes of strawberry jam and peanut butter. // 857 S. Pickett St., Alexandria

What this Falls Church brewery lacks in space, it makes up for in energy. On a recent Tuesday night, the one-room watering hole had definite weekend vibes as several dozen locals gathered noisily around large tables and an L-shaped bar. On the tap list—which appears in hard-copy form and above the bar on pizza box-sized paintings— find the Thirsty Work hazy IPA or the Campfire stout, a must-order if you swoon for See’s Candies. The food menu features “epic” grilled cheese, brats and pretzels. But if you aren’t that hungry, you can nibble all night on free, bottomless popcorn. That is, until they kick you out. // 110 E. Fairfax St., Falls Church 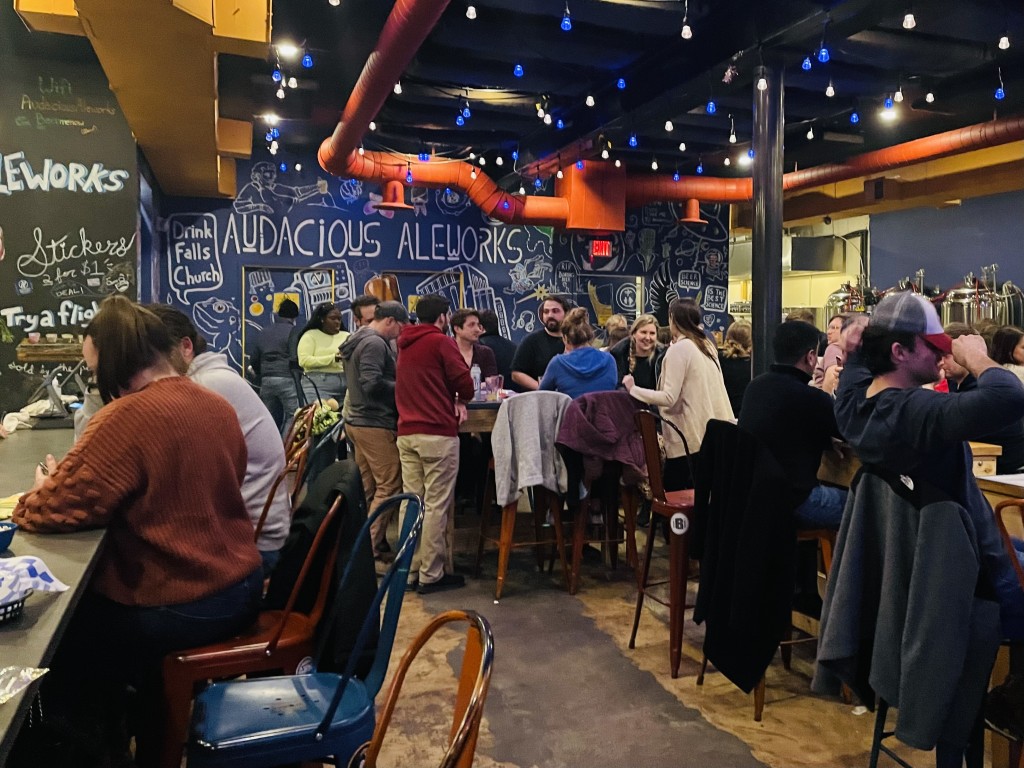 At Audacious Aleworks, you may not be able to hear yourself talk over the din of reveling locals. But that’s part of the fun. (Photo by Eliza Tebo)

In 2017, D.C. board-game-and-beer haven Board Room expanded to Clarendon in the onetime home of Sehkraft Brewing. Check out some of your most beloved childhood games from their library (e.g. yah, yah Yatzee) and sip a cold one while you spin the dice. The brewery sports a dozen and a half draft options on its active list, including the Czech Mate pils and a Java the Hut porter. And expect a full meal at this brewpub; with options ranging from calamari to flatbreads to cheesesteak, you won’t leave hungry. // 925 N. Garfield St., Arlington (Clarendon)

Caboose Tavern, a Vienna brewery on the W&OD bike trail with rabbit pot pie on the menu, added a sister location at Mosaic District in 2018. Built in a former warehouse, the bustling brewhouse boasts a large, dog-friendly patio, second in size only to its indoor space. On a weekday morning, stop in for a golden milk latte and avo toast, while watching passersby stroll toward Mosaic’s shops. By night, grab a table outside (weather permitting) and sample any of more than a dozen brews, including a blackberry gose and a Double Fogged double IPA, while picking at poke or nachos con queso fresco. // 2918 Eskridge Road, Fairfax (Mosaic District)

Since 2016, New District has poured lagers for dog-toting patrons and non-pet owners alike near Four Mile Run. The spacious taproom is home to trivia nights, live music, an annual food and culture fest, and, well, beer. For something summery, take a swig of the ginger saison; for citrus, opt for the National Landing IPA. And while the brewery doesn’t serve food beyond some basic snacks, you can often find a food truck (A Toda Madre, Urban Poutine) right outside. //2709 Oakland St., Arlington (Shirlington) 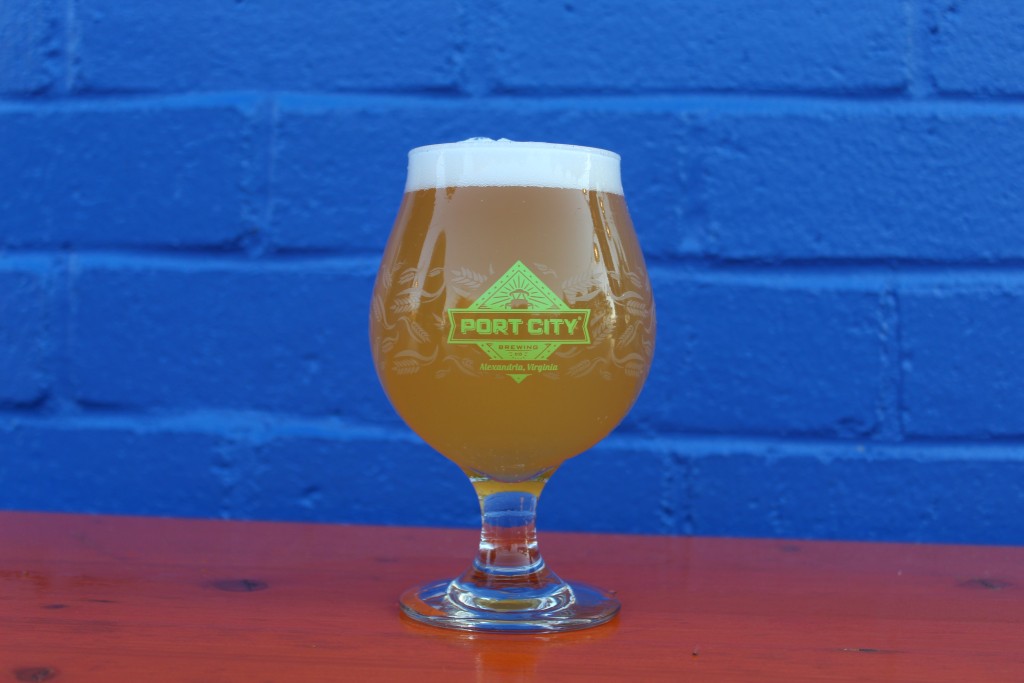 From Joggers and Lagers, to BeerYoga, to Jokes on Tap, Port City has no shortage of recurring events to keep fans coming back. The Alexandria taproom launched in 2011 and has achieved substantial growth since, with distribution of its brews in eight states, the U.K. and Sweden. Take your pick of where to sit; the brewery has four spaces to hang, including a sizeable parking-lot-turned-patio and a makeshift beer garden inside the beer house (available Friday to Sunday only). For a nosh, add prepackaged charcuterie, chips or peanuts to your tab, or grab a bite from a local food truck when available. As for the beer, it’s hard to go wrong with the Hazy IPA, a top seller. (Scooplet: Word on the street is, the brewery will soon release its first “hop seltzer,” a gluten-free, zero-calorie, zero-proof bubbly water that tastes like … hops.) // 3950 Wheeler Ave., Alexandria

This Merrifield brewery, born in 2018, aims to give “discriminating” zythophiles some solid choices when it comes to beer, and stages live music a couple times a week. On the tap list, find more than a dozen options, including the Bunnyman Settles Down brown ale, It’s a Lager That’s Dark, and the microbrewery’s signature Hop-Wah Phonic West Coast IPA. Feeling peckish? Dig into a taco (or three) from neighboring Tex-Mex purveyor El Tio Grill. (P.S. Be on the lookout for fun events and even field trips. Dave Matthews party bus, anyone?) // 2822 Fallfax Drive, Falls Church

At 7:30 on a recent weeknight, an intense round of trivia was underway at one end of this Falls Church alehouse, built in the former home of Mad Fox Brewing. Patrons scarfed down pizza, fried chicken and pulled pork sliders to the Eagles’ “Take it to the Limit” and other choice tunes. If you care to join in next time, don’t forget to wash your pub grub down with any of a dozen beers on tap. Pro tip: Though Sun’s Out, Hops Out is a mainstay for the brewery (whose flagship location is in Sterling), it may not be their best IPA; try the cloudy, eminently potable Livin’ for the Minute and you won’t be sorry. // 444 W Broad St., Falls Church 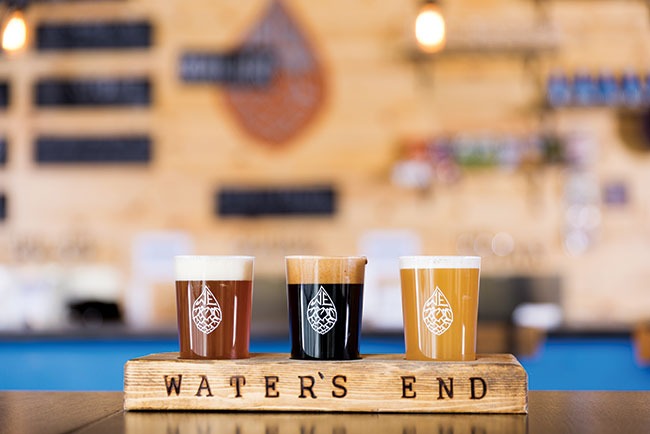 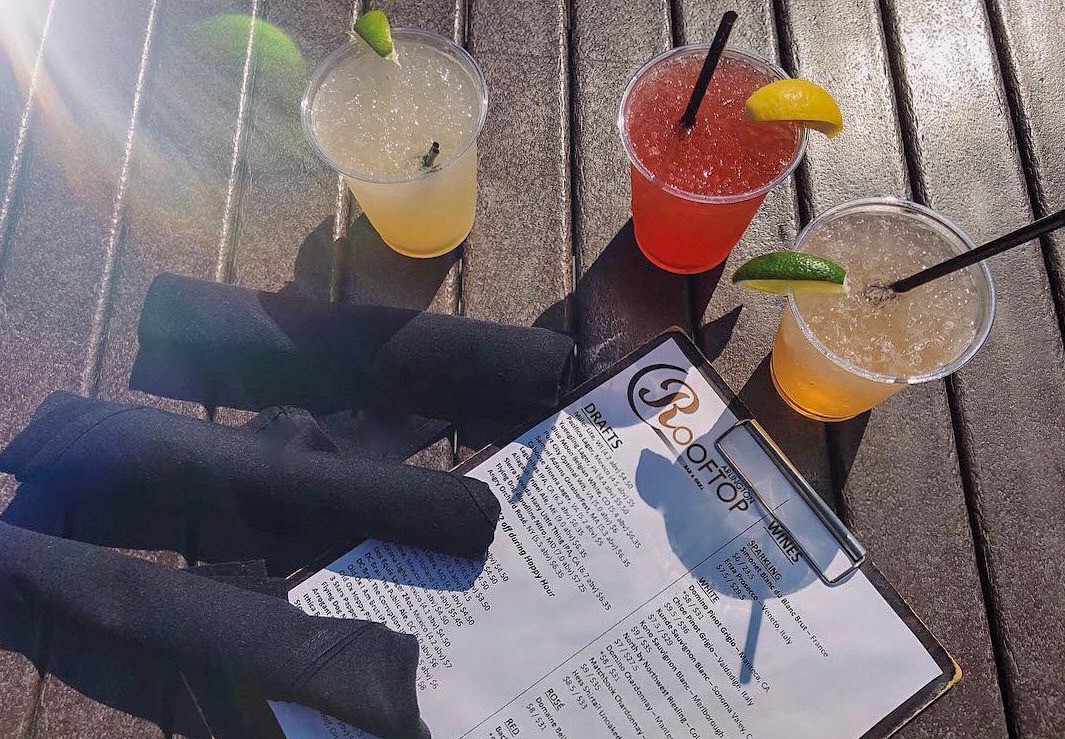 Soak Up the Sun at These Rooftop Bars