How a group of friends is tackling hunger, one home-cooked meal at a time. 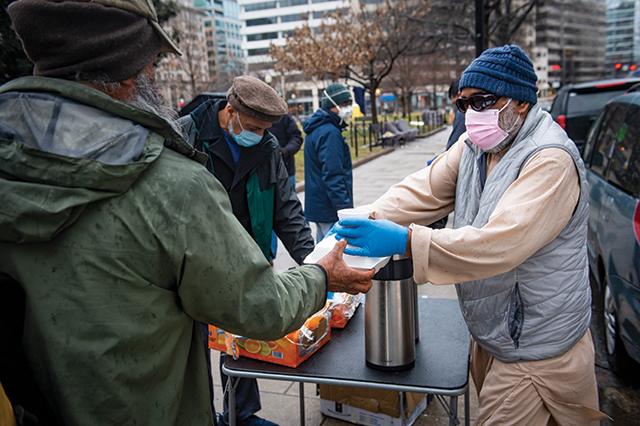 It’s a drizzly Sunday morning in Northwest D.C. A blue 2007 Toyota Sienna pulls up to the curb along E Street, packed with hot meals, drinks and snacks.

Noting the arrival of their “Muslim brothers,” the inhabitants of the tents that line the roadway slowly emerge as four men in PPE climb out of the mini‑van and set up shop. The perfumed scent of curried chicken and vegetables wafts through the air.

By day’s end, the men will have handed out more than 100 hot meals. It’s something they do every weekend. 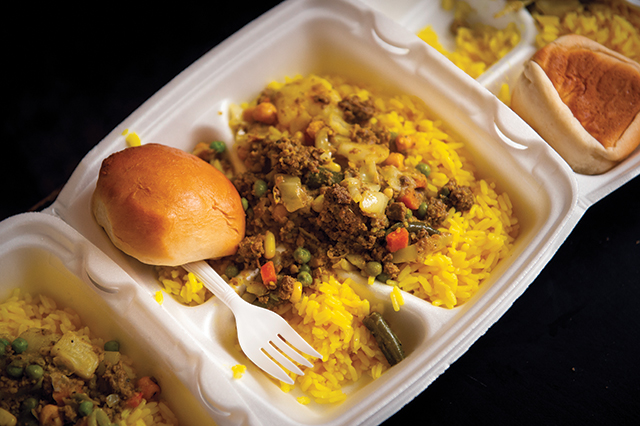 The weekly ritual started in October 2019, when software engineer Syed Mazhar, an Arlington father of two, originally from Bangladesh, decided he wanted to use his spare time to feed people who are homeless—a commitment that is deeply rooted in his Muslim faith.

According to the District of Columbia’s most recent survey, more than 9,700 homeless individuals live on the streets of our nation’s capital—two times the national average. Mazhar saw this alarming reality as an opportunity to practice Islam’s charitable teachings. He teamed up with his friend Khalifa Kanta, a full-time Uber driver from Tanzania who lives in Alexandria with his daughter and wife (who is expecting their second child). The two men had met at their South Arlington mosque and formed a bond. Together, they began distributing food as part of an informal effort they now call “Food for Thought.”

Before long, they were joined by Alcova Heights resident Farzal Ahmed, an IT engineer from Pakistan. Ahmed’s father, Javed, sometimes helps, too. 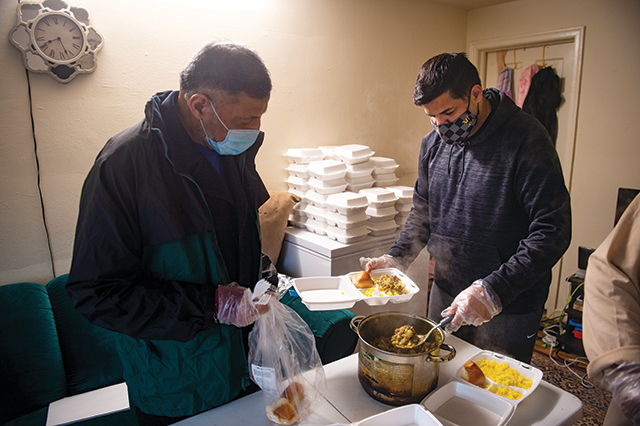 “Every Sunday, when I wake up, I’m so excited I don’t even worry about eating breakfast,” says Ahmed, a married father of two with twins on the way. “I’m just ready to start doing the work.”

The group has made weekly deliveries of home-cooked meals, almost without fail, for 19 months. The exception was a brief hiatus when Covid-19 first arrived in the D.C. area in March 2020. They had to pause distribution for two weeks because they didn’t have enough masks and latex gloves. 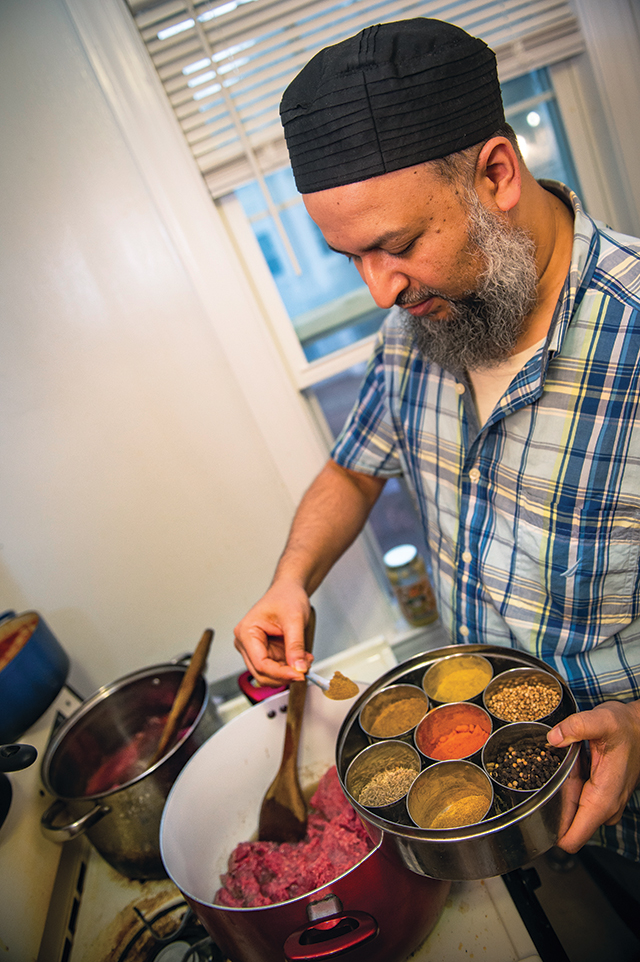 In August, Food for Thought welcomed another member—Mehdi Yese, a Crystal City limo service owner from Turkey. He was inspired by what he saw and wanted in. “Truly, [Mazhar] is sort of like an angel guy,” Yese says. “His heart is so generous, it’s incredible.”

Empathy and humanity lie at the heart of this grassroots effort. Each of the organizers wakes early on Sunday mornings and prepares his share of the day’s feast—sometimes with help from family—before meeting up at Mazhar’s Douglas Park home to package the meals, load the van and head into the city in separate cars.

One of the group’s rules is that they eat what they are serving. They would never offer a meal to others that they would not feed to their own families.

“This food that we make is really from love,” says Mazhar, who worked in restaurants throughout college. He plans each week’s menu, prioritizing nutrition and flavor. The offerings might include rice with beans, veggies and a protein—perhaps a beef stew or chicken curry—plus snacks such as fruit, hard-boiled eggs and applesauce.

Although she isn’t involved in meal deliveries, Mazhar’s wife, Baylor Stapleton, is an integral part of the operation’s success. She wakes up every Sunday at 5 a.m. to start chopping vegetables and cooking stews in big batches before her husband joins her to assist in the kitchen.

“I’ve been the person who needs that help before,” Stapleton says, “and now I’m in a position to give that help to someone. I feel like it’s important that if we are able to, we need to help.”

In doing so, the families hope to influence how Islam is perceived by Americans. Mazhar believes that most people who express hatred for Muslims simply don’t know any Muslims. He wants to demystify the faith and break barriers through this work.

“The thought process behind [this program] was building a bridge of communication, getting to know people,” he says. “We can do our part to [eliminate] some of the misconceptions.”

Each Food for Thought meal is packaged with a sticker that reads, Love from your Muslim Neighbors. The friends have distributed thousands of them to the residents of the tent city on E Street, and in McPherson Square park in the District. In February, they added another Sunday stop near Union Station.

Mark (who gave only his first name), a food-insecure man who lives with his wife, has known the Food for Thought team since the beginning. He says he looks forward to Sundays, not only for the food, but also for the camaraderie.