How a group of friends is tackling hunger, one home-cooked meal at a time.

“Their coffee is incredible, and they have food which is amazing, but they’re also human beings, you know?” he says, smiling under his yellow-bandanna face covering as he takes his hands out of his jeans pockets to adjust his baseball cap. “They talk to you and they have a bond [with the people they serve], which makes me want to be here to see them. I’m happy to see them.”

Regulars like Mark have become a sounding board for Food for Thought. At the start of 2021, when temperatures plummeted below freezing, Mazhar and his team asked how they could better serve their friends in need. They started driving into the city on Saturdays, and sometimes weekdays, to distribute blankets (which they buy from Walmart), hot chocolate, coffee and tea.

This winter, one of the “brothers” in the homeless community died from the cold. He didn’t have enough warm clothes to protect him from the elements. Since the man was Muslim, his neighbor asked Mazhar’s group to lead a prayer service. They did so without hesitation, among the tents. 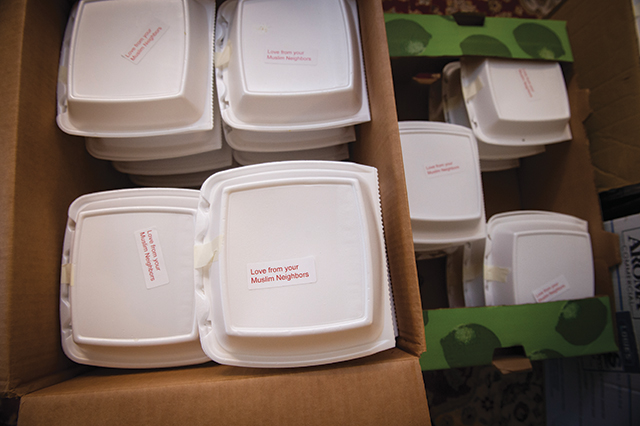 Meals with a message. Photo by Lisa Helfert

A short time later, another brother died after being hit by a car. That Sunday’s dinner drop became a memorial of sorts. The volunteers shared photos and videos they had taken of the man smiling and singing during previous visits.

Over time, the homespun effort has grown. Friends, neighbors and fellow congregants join the group from time to time, helping to distribute food on weekends. Some leave contributions, such as rice or bread, on Mazhar’s front porch.

The compassion has a multiplying effect. Ahmed was doing door-to-door work as a Census taker in his neighborhood last summer when he met Tahir Rana. “I happened to knock on his door and we started talking,” Ahmed says. Now Rana volunteers regularly with weekend meal deliveries.

Every little bit helps. The organizers pay for all of the food and supplies out of their own pockets, buying in bulk from Costco, Walmart, Amazon and Restaurant Depot. 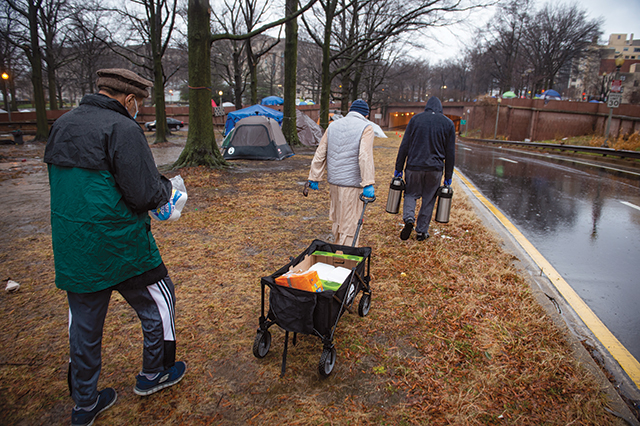 They hope to continue the momentum—possibly by starting a website to raise awareness and funds. They’ve discussed bringing in a mental health professional who is willing to donate time and expertise to the cause.

“I love to see their smiles,” Mazhar says of his weekend friends in the city. “We have grown relationships with them. Seeing them happy makes us happy.”

The charity of those who expend their wealth in the Way of Allah may be likened to a grain of corn, which produces seven ears and each ear yields a hundred grains, reads a passage in the Koran.

It’s a philosophy these friends both practice and preach.