As the mini art space closes, its founder is looking for new digs. 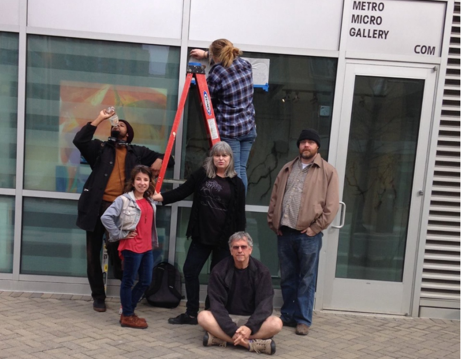 Starting in late 2016, the gallery showcased the work of experienced artists to both the art critic and the curious passersby who may have spotted its windows from Wilson Boulevard. Its exhibits brought us a critique of excessive real-estate development. An abstract exploration of cultural intersections. A photo diary of “a self-important fat girl.” For such a small art space, the gallery shepherded artists who were anything but, presenting work that was current, relatable and provocative.

But now, the handful of artist studios on the first floor of the gallery’s condo building are changing occupants to make way for a new artist-residency program, ARC3409 Arts Studios. Whereas prior occupants were month-to-month tenants of the studio space, incoming artists from D.C., Maryland or Virginia will now need to be awarded a three-year residency (which can be renewed once) and selected through a juried panel process that includes unit owners and a member of the Arlington Commission for the Arts. 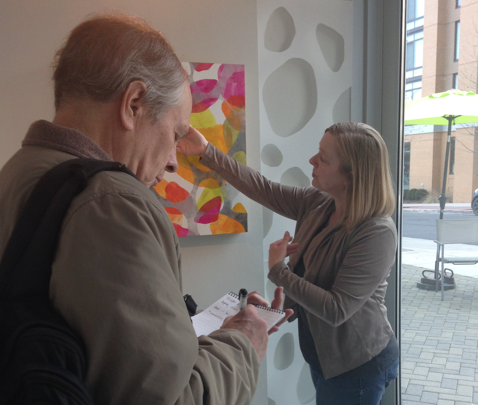 Yet for abstract painter Barbara Januszkiewicz, the change signifies the end of an era for the gallery she founded and has promoted for the past few years, including buttressing it with a $5,000 grant she received in 2017 from Arlington County. Though Januszkiewicz and the other two artists renting space were invited to apply for the new residency program, the studios now come with a heftier price tag (up from $8 a square foot to $22 to better cover operating costs, says Mayeux) and no guarantee of acceptance. Januszkiewicz says that the invitation to apply for the residency was not immediately made clear in the notice to vacate.

“‘Well, just give me a new lease, give me first refusal, and if you want us to go, just make the rent really high and we’ll go on our own,'” Januszkiewicz says, recalling her response to the July 10th letter she received asking her to vacate by September 30 (a date subsequently pushed back to October 14 so that the artist could be part of the Arlington Visual Art Studio Tour). “But just to get kicked out? I had to call all my curators and all my artists, because I’m booked for a year and a half. … And all my curators said to me, ‘Wherever you go, Barbara, we’ll go with you.'”

Januszkiewicz is still looking for affordable gallery space in Arlington, but the assistance she has received from the county’s BizLaunch program thus far has turned up properties that she says far exceed her desired price range. She does, however, have leads on a few alternate locations outside the county, including Bethesda and D.C.’s 14th Street corridor. The Arlington resident has also found a new studio in nearby Falls Church and launched a GoFundMe campaign for funds to support the gallery, or possibly multiple galleries with the same brand and format. In addition to creating a street-front art space in an urban setting, the Metro Micro Gallery had a “pay it forward” mission that invited exhibiting artists to curate future shows of fellow artists or give back to the artist community in other ways.

“I do hope she finds another place,” says Michelle Isabelle-Stark, director of Arlington Cultural Affairs who, with director of county real estate development Marc McCauley, served as a county liaison for the revised building management plan at ARC3409. “I am really hoping that she stays in Arlington and will be able to maybe even expand the Metro Micro Gallery to a larger space. But what she did was really important and was a huge contribution to the community.”

The new studios, which join roughly a dozen formal visual art spaces in the county, will serve as incubators for new local talent, Isabelle-Stark says, and have the same residency duration as the nearby Arlington Arts Center.

As for the space that once housed the gallery, which is essentially a vestibule outside a wheelchair-accessible restroom, its future is a bit hazy. While Mayeux says incoming artists are welcome to collectively run a new gallery there, he notes that there is no mandate to do so.

In her effort to continue the legacy of her nascent gallery, Januszkiewicz remains hopeful that an affordable Arlington home will be found.

“I’m taking a negative and making it a positive,” Januszkiewicz says. “People are coming to me with offers, and I still would like to have an offer in the town I live in.”