Finding that sweet spot in a racial identity that isn’t black or white. 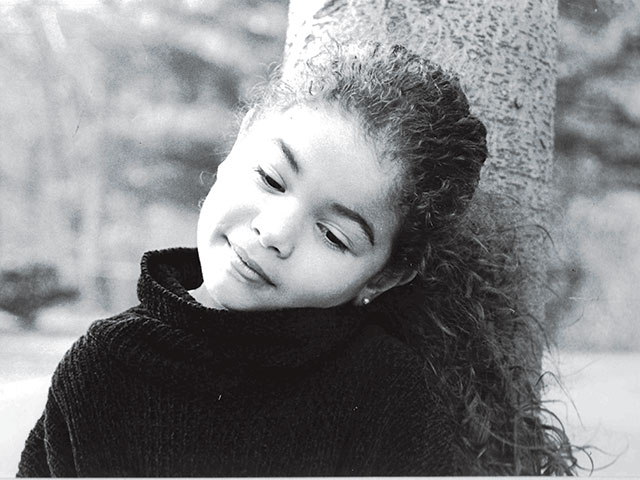 The author at age 4

We all know the scene: The scrawny kid, deemed easy prey by the infamous school bully, is shoved into a locker in front of a hallway full of classmates. From that point on, the kid knows exactly where he belongs because the bully literally put him in his place.

Something similar happened to me, albeit gradually and minus the physical assault. Throughout my adolescence, I absorbed the implicit racial bias of my peers and was shoved somewhere I didn’t find too comfortable—a box of cookies. Specifically, Oreo cookies.

Never heard that one before, huh? Allow me to explain.

Growing up, race wasn’t discussed in my house. My parents—my Latina mom and black dad—had different complexions but I didn’t think much of it. I had more important things to worry about, like which stuffed animals were joining me for tea or when my next soccer game was. But I do remember the first time I was caught off-guard by a racial comment. My dad’s stepmom was sitting on the couch with me watching an NFL playoff game and I asked her who she was rooting for. “I’m not sure,” she said. “Whoever has the black coach, I guess.”

My eyebrows furrowed. There I was, an 8-year-old watching sports. The only colors on the screen I saw as important were the ones on the players’ uniforms. But that comment made me realize there were people in the world who saw more colors than I did.

A few years later, I started playing competitive soccer. After a joint practice with several other teams, I was waiting at pickup with a girl I’d met a few weeks before. She definitely meant no harm when, upon seeing my mom, she asked, in a hushed voice with raised eyebrows, “Are you adopted?”

I’d already started to walk away and just made a face, shook my head and said “no.” Ten-year-old me dissected this as best I could. She was my mom. Could people not tell? Would the girl have asked me that if my dad picked me up? This is when I started to feel slightly othered.

Throughout high school, I was always told how “white” I acted. Some kids called me “an Oreo” (black on the outside, white on the inside—get it?). I’d chuckle passively, but once I really thought about it, the comments started to upset me. I listened to punk rock, wore bohemian clothing, hung out with a lot of white kids and never knew which rapper was playing in my friend’s car. Somehow, that made me “white.”

The thing is, despite the similarities between me and the white girls in school, I didn’t entirely feel like I fit in with them. I didn’t completely fit in with the Latinx or black kids, either. I had the ability to comfortably talk to every kind of person, but after a while I felt like a social paradox: Even though I fit in everywhere, I didn’t really fit in anywhere.

Now, I certainly wasn’t the only mixed-race kid in Arlington County, but I never spoke to any of the others about how I felt, about my not-so-slight identity crisis. When I looked to my right and left, my fellow biracial students seemed to have it figured out, like they weren’t fighting the same internal battle. Was I the only one who struggled with checking one box on school forms, who didn’t know where to sit at lunch, who was questioned when I didn’t act in accordance with how I looked?

This feeling followed me to college. While writing an essay about microaggression, I discovered a Huffington Post article about a woman I’ve long admired, sports journalist Sage Steele. In it, she said, “I didn’t even know that I was the only black student out of 1,800 kids until someone told me, because I didn’t look at people that way—I never have.”

Steele’s father is black and her mother is white, and because of her curls and caramel skin, she was the first journalist I was able to identify with. I took comfort in knowing she had to peel back the layers of her biracialism just like I’ve had to.

A year later, my favorite television show, The Bold Type, highlighted a storyline I one hundred percent identified with. One of the main characters, upon being promoted, grapples with whether to identify herself as a black woman in her professional bio, even though she feels like in doing so she would be rejecting her white mother.

I was 21 when this episode aired. When it finished, it occurred to me that it was the first time in my life I had watched a storyline like mine unfold on a screen. If I checked the “Latino/Hispanic” box, was that a slap in the face to my dad? If I checked the “Black/African-American” box, would my mom feel forgotten? If I clicked “none of the above,” was I taking a stand or waving a white flag or something else?

My biracial identity never kept me up at night or caused severe anxiety, but no plot had ever hit home that much. Since then, I’ve seen more recognition of the biracial-American experience in media. Mixed-ish, a spinoff of the ABC show Black-ish, about the upbringing of its half-black, half-white mother, premiered in September. This past summer, Elaine Welteroth, the youngest and second person of African-American heritage to be a Condé Nast editor-in-chief, released her book, More Than Enough, in which she discusses navigating life and career as a biracial woman. There’s even an eight-episode podcast by The Washington Post called “Other: Mixed Race in America.”

This wave of representation is just what the next generation of biracial youth needs to navigate their inherent dualism. I hope these stories offer figures they can identify with.

I hope they realize they’re allowed to challenge the molds others so desperately want them to conform to. I hope the little brown girl sitting in school right now, not knowing where she belongs, learns that she belongs everywhere. And if she’s anything like me, I hope she grows up to embrace what I’ve learned to embrace to the fullest: There’s something truly magical in being milk’s favorite cookie.

Sydney Johnson is a recent college graduate. She is a 2015 alumna of Washington-Lee (now Washington-Liberty) High School and currently lives in Arlington.