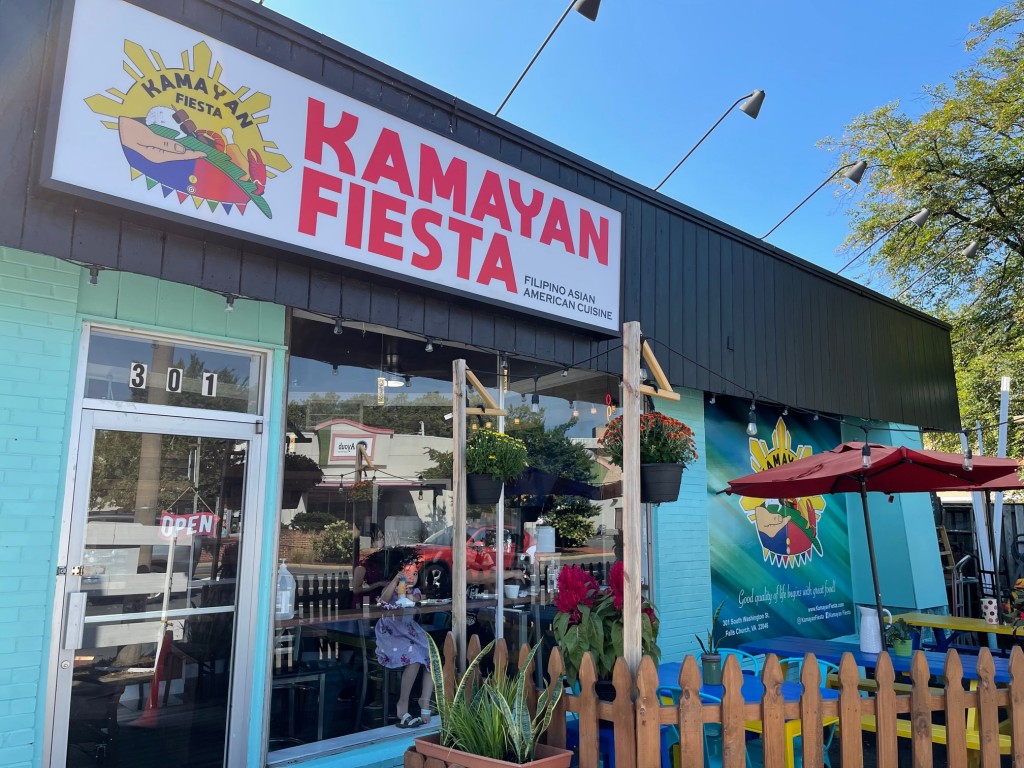 Be prepared for indecision the first time you encounter the steam table at Kamayan Fiesta in Falls Church. Filipino dishes such as chicken adobo, deep-fried pompano, beef kaldereta (a spicy stew) and baby squid braised in soy and ginger are made fresh daily at this tiny, 600-square-foot café that opened in September.

I thought I had finally made a selection (as the person behind the counter waited patiently to dish up my request) when out came a pan of bicol express—pork cooked with coconut milk, hot peppers and shrimp paste—and I had to rethink my plan. Platters of one to four entrées range from $7.99 to $24.99 and include rice and bottled water. The café has two small tables inside and a 15-seat outdoor patio.

This is the second location of Kamayan Fiesta for founder Ray Ann Bacolanlan Duran, who opened the first in Springfield in 2020. She and her wife, Jhett Dalo Duran, are the chefs. They co-own both eateries with Jhett’s brother, Leo Dalo Duran.

The Falls Church expansion was rather serendipitous. Ray Ann was scrolling through Facebook Marketplace in search of kitchen equipment for another location (which opened in Oxon Hill, Maryland, in December) when she noticed the building across from the former Johnsons Café space on South Washington Street was for sale. She struck a deal three days later, got a permit in two days and opened in less than three weeks. 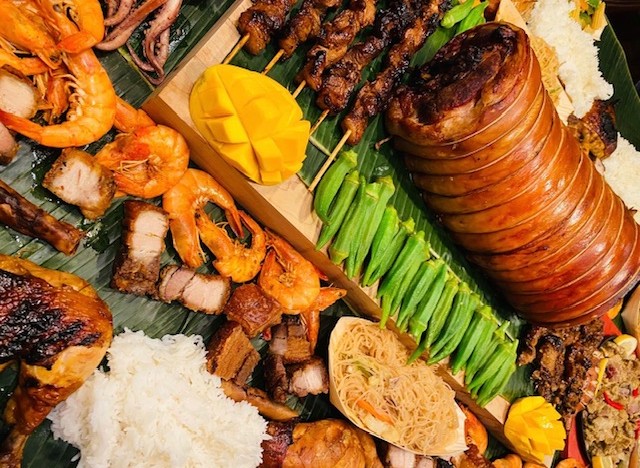 Entrepreneurial by nature, Ray Ann previously owned a beauty shop, a restaurant and a store in the Philippines, where same-sex marriage is illegal. She gave them all up to marry Jhett, who immigrated to Virginia in 2005. The couple maintained a long-distance relationship for years until Ray Ann finally moved stateside in August 2016. They married two weeks later.

The Durans have more than 55 dishes in their repertoire, offering roughly 20 at a time, Monday through Friday, and 35 on weekends. Various pancit (noodle) dishes are made to order. Don’t see favorites such as crispy pata (pork shank) or grilled pork belly? They may be available—just ask.

Diners who are new to the wonders of Filipino cuisine may want to request a guided tour of the steam table, as the dishes aren’t labeled. On weekends, Kamayan Fiesta offers sisig (a hash of pig ears, snout and belly, with peppers, onions and crispy pork skin), lechon (crispy-skinned pork belly) and chicken inasal (leg quarters that are marinated in lemongrass and then grilled).

A kamayan, by the way, is a feast in which multiple dishes are spread out on a table lined with banana leaves and eaten with your hands. Kamayan Fiesta offers such feasts (also known as Boodle Fights) as takeout to serve at home, complete with banana leaves. The feasts range in price from $35 to $50 per person and require two days’ advance notice.