When Mom and Dad lose their cool on the sidelines, no one wins. 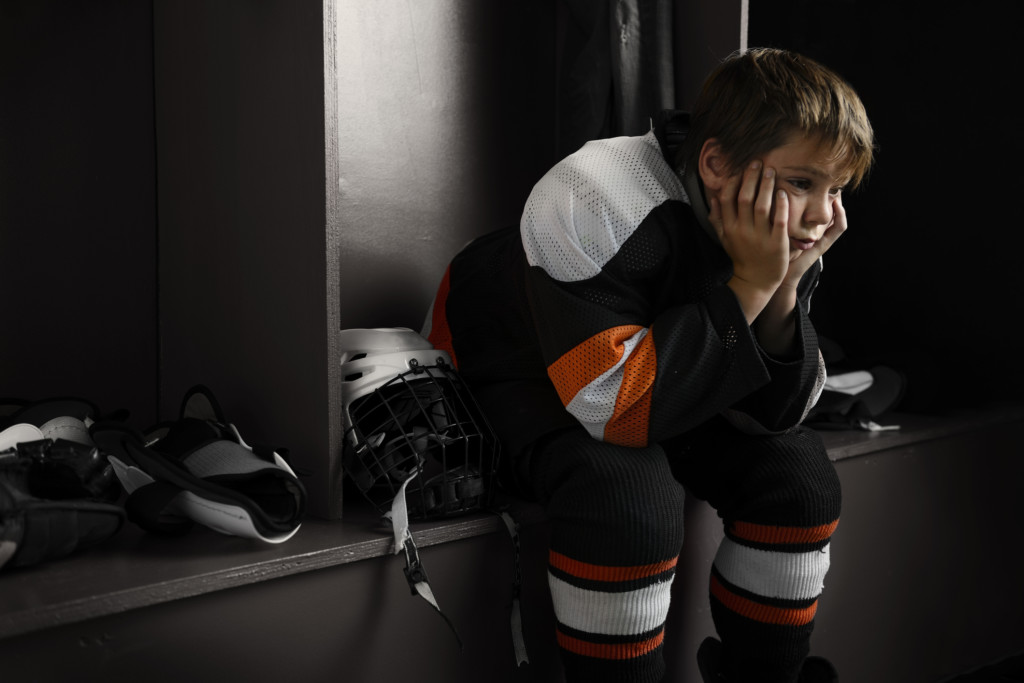 When Mike Miranda’s youngest child, Michael, showed a serious interest in hockey at an early age, Miranda did everything he could to support his son’s passion. He researched the area’s top hockey programs; developed an off-ice workout for Michael; and signed him up for private skating lessons with Wendy Marco, one of the country’s top skating instructors.

The problem was, Miranda wouldn’t let Marco and the other coaches do their job. Instead, during lessons, he screamed through the Plexiglas when he thought his son was “goofing off,” not hustling, or making mental errors.

“I would look at Michael and think that he could be doing so much better,” Miranda says, “and it would drive me crazy.”

“This was supposed to be a fun race,” recalls Marco. “He was running faster than the kids were skating, just yelling, ‘Go faster, go faster!’ ”

As soon as the race was over, Marco picked up the microphone and announced, “Mike, you need to leave now.” Then she turned to his son and said, “Mikey, your daddy is getting a time-out.”

Miranda, a stay-at-home father of three who grew up in the area and attended George C. Marshall High School in Falls Church, is not the only local parent in need of an intervention. Go to any field, park, rink or court around town, and it won’t take long to find the others.

“What? Do you have cement in your shoes?” barks a mom, hovering just a few feet off the basketball court at Swanson Middle School.

“Keep trying it your way and see how well that works,” yells a father just after his son swings and misses for strike two at Barcroft Park. His son takes the next pitch for strike three.

“C’mon, you call that aggressive?” shouts a dad who is straddling the sideline of his daughter’s soccer field at Arlington Hall West Park.

“You gotta make that play!”

“What’s wrong with you?”

For parents who can’t seem to control their emotions from the sidelines, 12-year-old Brendan, a local hockey player, has some advice that isn’t exactly sugarcoated:

While there may be more appropriate ways to verbalize that sentiment, he’s not the only one thinking it. In researching this story, we asked more than 100 coaches, professional athletes, psychologists and kids, “What advice would you give to parents who watch their kids play sports?”

Their nearly unanimous answer? Stop yelling from the sidelines.

“It’s one of the worst things a parent can do,” says sports psychologist Neal Bowes, a certified consultant with the Association for Applied Sport Psychology. “The ‘Johnny do this, Johnny do that.’ We’re learning that that kind of behavior is extremely destructive.”

A former professional soccer player from England who now lives in Arlington, Bowes understands what it takes to succeed at the highest level of competition. He has provided psychological training for athletes at the past three Olympic Games. He also trains coaches and parents on the psychology of youth sports through his McLean-based company, Simply Performance Group.

Being a child athlete is like being in a fight for survival, Bowes explains, especially when kids are trying to learn in an environment where their parents are constantly correcting every mistake they make.

“Yeah, I saw that a lot [as a kid],” Chicago Bulls All-Star point guard Derrick Rose says during an interview in the visitors’ locker room at the Verizon Center. “My first thought was always, why are parents doing that to their kids? It’s embarrassing.”

In fact, it’s more than embarrassing. Research at the Institute for the Study of Youth Sports at Michigan State University suggests that parents who provide running commentary during games tend to breed dependency, anxiety and a lack of creativity. As a result, their kids struggle to develop critical “adaptive behaviors”—such as working hard and problem solving—because they’re never allowed to make mistakes, learn from them and then recover on their own.

“If you’re thinking, ‘Yeah, that might not be good for most kids, but my kid can handle it,’ it’s just not true,” warns Bowes. “Those are the types of parents who don’t talk to their kids. Their kids are probably terrified of telling them the truth.”

Marco, who has coached more than a few players who went on to the National Hockey League and American Hockey League, agrees. “I just know that I’ve never seen it work,” she says one Friday after a full morning of lessons at Kettler Capitals Iceplex. “Not one single time.”

In Miranda’s case, his son, Michael, became so focused on his dad’s feedback during games and practices that the comments stifled his progress. Michael became distracted on the ice and was often a step behind. The pace of his improvement slowed. Stress ultimately marred an activity that was supposed to be fun.

“Michael was way more concerned with what I thought than actually playing the game,” his dad confesses. “He shouldn’t have been looking over at me, and he did that way too much. Unfortunately, I created that.”

To be fair, experts say that parents are only part of the problem. Coaches, clubs and youth organizations also play a significant role in pushing a culture that encourages extreme competitiveness at an early age.

“Parents have this idea that if they don’t sign up for travel soccer by the time their kid is 7, they’re going to miss the boat,” Bowes says. But this kind of pressure can backfire.