The City of Brotherly Love is on fire with destination-worthy restaurants and bars. 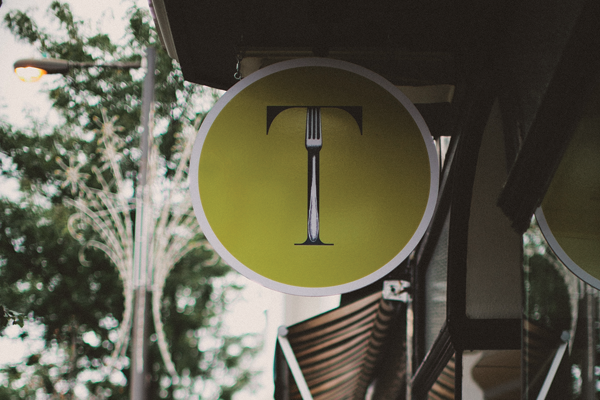 To paraphrase a joke often attributed to W.C. Fields, I spent two weeks in Philadelphia for a couple of days in September, packing a fortnight’s worth of eating and drinking into a 48-hour span. And I’m here to tell you that the food and cocktail scene there, contrary to the late comedian’s opinion, is anything but boring.

Fields, a Philadelphia native, took every opportunity to call his hometown “dullsville,” but this visitor found it exciting, intriguing and totally current. After hitting more than 20 places for breakfast, lunch, dinner, booze and loads of noshes between meals, I affirmed the sense I came away with after a similar binge two years before: That town is on fire.

Philadelphia is between Washington and New York, but it’s closer to the latter more than just geographically. Both cities were major ports of entry for immigrants who brought heterogeneity, a no-nonsense work ethic and deeply rooted food traditions with them.

Like New York, Philly is a city of neighborhoods. “That really can’t be overstated,” says one local foodie pal I consulted during my visit. “I’m from Northeast Philly, so South Philly doesn’t have anything to do with me.” That’s changing, however—along with her tune—now that East Passyunk (pronounced pa-SHUNK) Avenue in South Philly is blowing up with amazing food options. She wants to be in on the action by eating and drinking all over town. 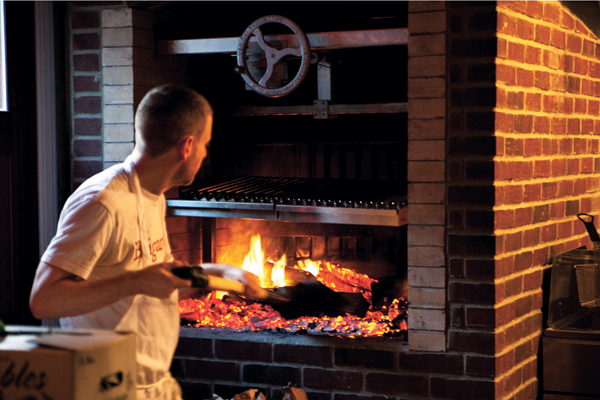 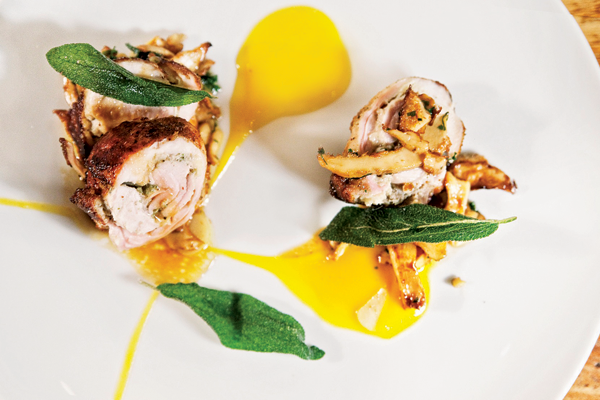 At Townsend (www.townsendrestaurant.com) in East Passyunk, chef-owner Tod Wentz offers a sublime rabbit roulade, braised “pot-au-feu” style with carrots and potatoes. His charming white-tablecloth restaurant (upstairs) with a cozy bar (downstairs) features refined French cooking with interpretations, such as broiled oysters with spinach, bacon and fennel; or Hamachi cubes and cucumber dressed with sesame oil and seeds, lime juice, and furikake (a Japanese seasoning). The escargots and fava beans in rich crème fraîche sauce with bacon and sherry are irresistible. 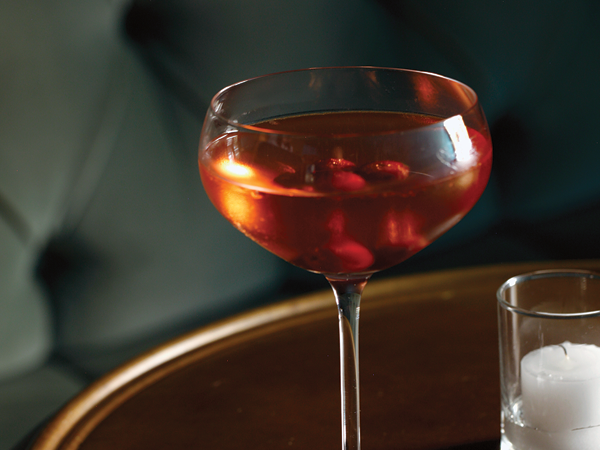 Center City, including Rittenhouse Square, also is a trove of interesting eats and drinks. One area where Philadelphia is miles ahead of Washington is on the vegan and vegetarian front. Take Charlie Was a Sinner (charliewasasinner.com), a sexy, narrow space with slate-blue walls, low lighting, terrific cocktails by J. Christine Lamb and vegan small plates by chef Ted Manko. The Going Down Easy (lemongrass-infused gin, yellow Chartreuse, lemon) is true to its name. Avocado toast with shredded radish and habañero aioli is splendid, as are the fried artichokes with saffron aioli. 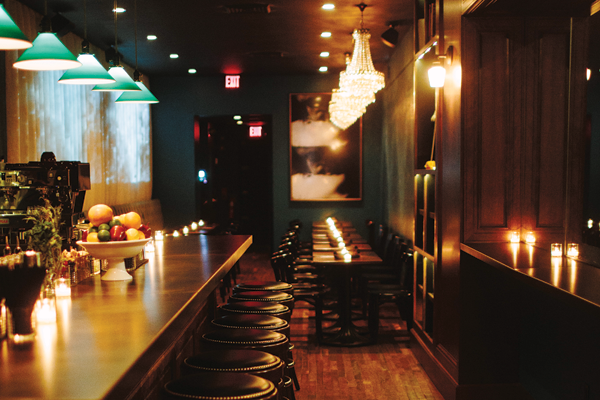 Charlie Was a Sinner's moody interior. Photo by Pat Fuey. 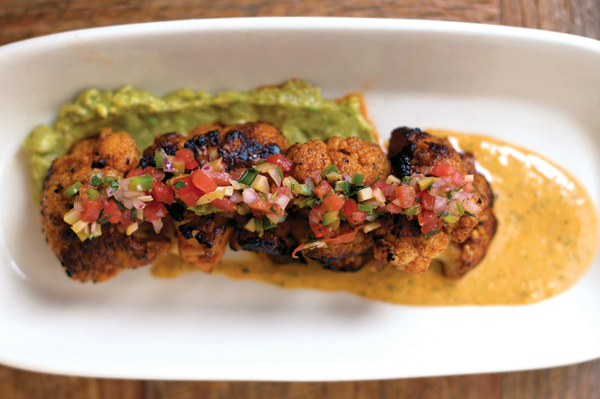 Dinner at Vernick Food and Drink (vernickphilly.com), also near Rittenhouse Square, is de rigueur. The hushed second-floor dining room, with its light-wood tables and floors, wall shelf of votive candles and centerpiece of stunning flowers, is a perfect setting for a romantic evening. Our stellar meal started with striped jack crudo with avocado dollops and smoked jalapeño oil, followed by heavenly tiny curds of scrambled egg, topped with whipped butter and uni. We then moved on to tuna poke with candied tamarind, macadamia nuts, black sesame seeds and yogurt foam; a salad of toasted couscous, corn, steamed mussels and tarragon
aioli; duck ragù tagliatelle; and corn and coconut crème caramel.

Excellent cocktail programs abound in Philly, from noodle bars to the finest restaurants, but two places that specialize in them are standouts. The Franklin Bar in Rittenhouse Square (thefranklinbar.com) is a downstairs, speakeasy-type bar with an unmarked entrance and a bouncer outside. Inside, it’s all tufted oxblood banquettes, marble-topped tables and exposed brick. Head bartender Sara Justice’s menu is well curated. A three-course cocktail tasting menu for $35 affords the chance to sample three stellar libations in one fell swoop. When I was there, a tiki trio included Surf Avenue (multiple rums, Blue Curaçao, green tea, pineapple juice, cream, bitters); Under the Boardwalk (a drink laced with passion fruit, coconut and ginger); and Laughy Taffy, which featured cognac, brown butter and banana. 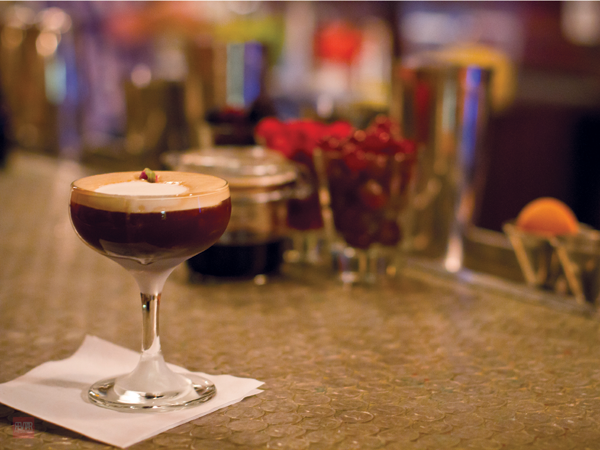 The Nevermore at Hop Sing Laundromat. Photo by Revtar Photography

If you can only go to one bar, make sure it’s Hop Sing Laundromat (hopsinglaundromat.com) in Chinatown. The place has no sign or phone number, takes no reservations and has a few rules: no tennis shoes/flip-flops/sandals, no shorts, no hats, no phones, no cameras and cash only. Other standards: top-shelf liquor only (The Glenlivet 15 is in the well) and reasonable prices.

I intended to stop by Hop Sing for one drink on the way to a 5:30 dinner reservation. Ten cocktails and two-and-a-half hours later, my companion and I were woozy from the charm and talent of the bar’s quirky owner, Lê, the man who built the dark, inviting boîte himself and filled it with artwork and finishes that deserve a story of their own. (The bar is made of perfectly aligned inlaid nickels.) Legendary cocktails include the Nevermore, a grown-up’s cappuccino in a coupe made with gin, cold Vietnamese coffee, Patrón Citrónge and a float of cream; and the Henry “Box” Brown, made with 15-year-old rum and freshly pressed red grape juice.

My only regret on this trip to Philly was that I didn’t have a chance to hit any BYOB restaurants. Wine and spirits can only be bought in Pennsylvania from state-owned outlets, where the cost and subsequent markup are high. Liquor licenses are also expensive. So, many restaurateurs find a small space with decent rent, make sure the food is great, accept cash only and let people bring their own liquor. Two tried-and-trues are Modo Mio for Italian (modomiorestaurants.com) in Northern Liberties and Pumpkin (pumpkinphilly.com) for solid seasonal American cooking in Graduate Hospital, aka “G-Ho.” (That is the name of the neighborhood, by the way.)

On the way out of town, I did stop at a few food emporiums in Center City for car snacks to keep me company on the two-and-a-half-hour drive home. Among them were hummus piled with crispy chicken skins, buttermilk-ranch-coated fried chicken and an overstuffed Italian hoagie.  The next time someone asks me where the best place to eat in Washington is, I just may tell him Philadelphia. 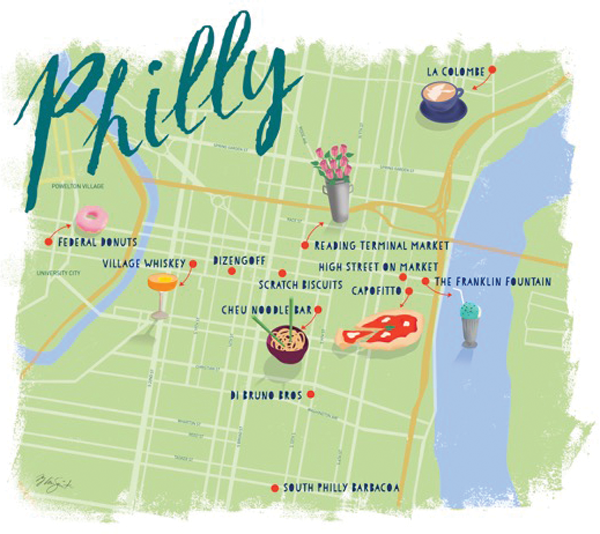 Still hungry? Graze your way through these local treasures.

High Street on Market
This sister restaurant to Fork (whose chef, Eli Kulp, was paralyzed in the Amtrak crash of May 2015) is known for baker Alex Bois’ bread, so make a point of breakfasting here. The black squid ink bialy, encrusted with sesame seeds and filled with whitefish, will make you a believer. The same goes for the coffee-almond-date cake, and the red-eye Danish with ham and coffee cream. Breakfast: 7:30 a.m.-11:30 a.m. Monday-Friday; 8 a.m.-3:30 p.m. Saturday and Sunday. (Also open for lunch and dinner.) 308 Market St., 215-625-0988; highstreetonmarket.com 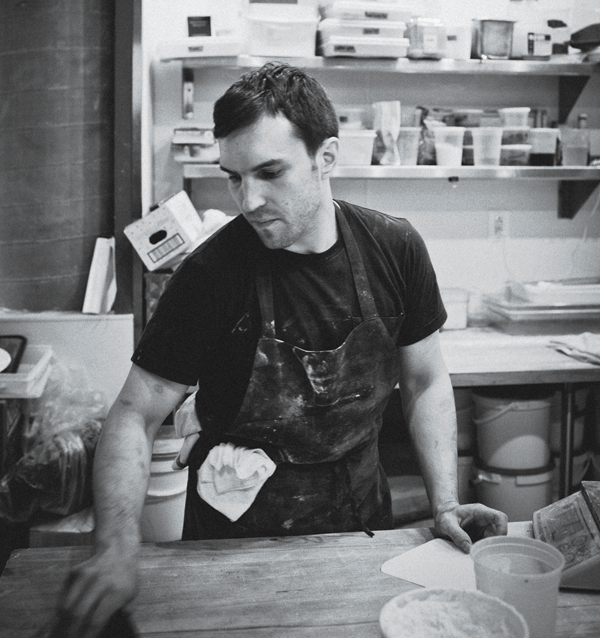 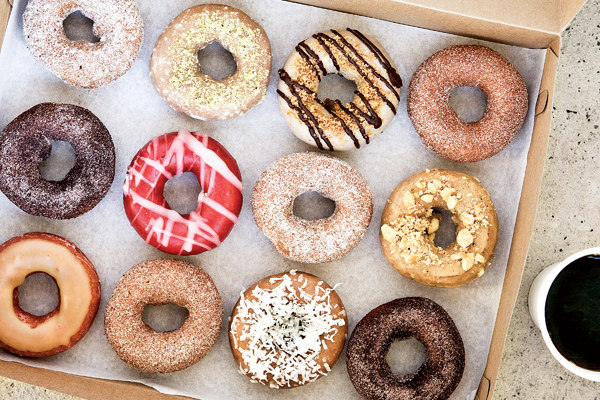 Federal Donuts
Each order of succulent, crispy fried chicken, served naked or tossed with a choice of seasonings (coconut-curry, za’atar, buttermilk-ranch) and a glaze (chili-garlic, soy-garlic, honey-ginger) comes with a honey-cake doughnut. But you may find yourself leaving with strawberry-shortcake, chocolate-éclair and lemon-ricotta doughnuts, too. Open 7 a.m.-7 p.m. (or until sold out); chicken starts at 11 a.m. 1632 Sansom St., 215-665-1101; federaldonuts.com

The Franklin Fountain
This old-fashioned soda shop in Old City makes the best ice cream in town. Its house fudge, composed mainly of Wilbur’s chocolate, is gooey and chewy as it should be. Try it on top of Whirly Berley ice cream (chocolate with nougat and salted caramel) with whipped cream and a Bordeaux cherry for a transcendent experience. Open 11 a.m.-midnight daily. Cash only. 116 Market St., 215-627-1899; franklinfountain.com

South Philly Barbacoa
Chef/owners Cristina Martinez and Ben Miller traded in their cult-following food truck for this small brick-and-mortar eatery, which is known for its lamb barbacoa tacos. The tortillas are made in-house and the meat is slow-cooked, chopped to order, ultra-juicy and all-around delectable. Dress it up with onions, cilantro, roasted peppers, nopales and salsa verde from the toppings bar. Open 5 a.m. to sellout, Friday-Sunday. Cash only. 1703 S. 11th St., 215-694-3797. 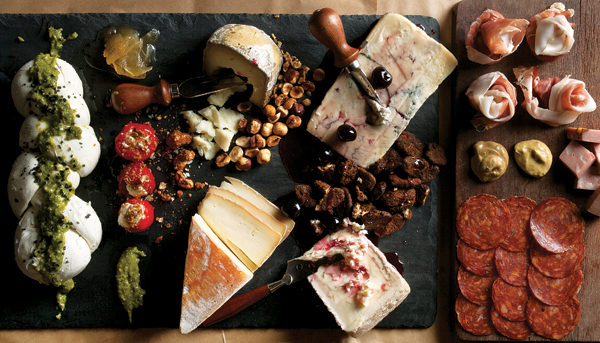 Di Bruno Bros.
Forget the Rittenhouse Square outpost of this Italian market. The real gem is its tiny flagship cheese store, which opened 75 years ago among the stalls of Ninth Street’s famed Italian market in South Philly. Here’s a tip: Go there with up to 16 folks for a private, after-hours tasting, complete with antipasti, salumi, cheeses, oil and vinegar samplings and stories. Such events are BYO friendly, and participants will enjoy a 10 percent discount on purchases. Call for hours and pricing (ballpark is $55 per person, plus tax and gratuity). 930 S. Ninth St., 215-922-2876; dibruno.com

Dizengoff
When you walk in the door of chef Michael Solomonov’s hummusiya, your eye is drawn to the baker pulling puffed pitas from a wood-burning oven. But the star of the place is the silky hummus, whether topped with a pile of crispy chicken skins, or with braised onions, pistachios, sumac, za’atar and dill. On the side, try a cucumber, tomato and onion salad with cornichons. Open 10:30 a.m.-7 p.m. daily. 1625 Sansom St., 215-867-8181; dizengoffphilly.com.

David Hagedorn is an overstuffed and underpaid food, travel and design writer in Washington, D.C.