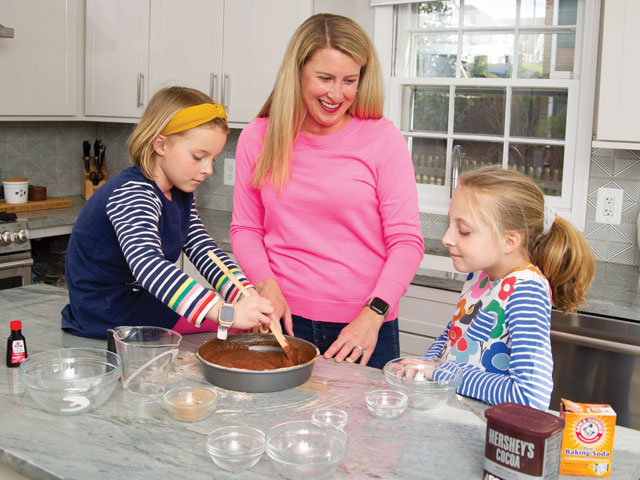 Food allergies are a significant source of stress and anxiety for kids and their families. Physicians routinely encounter preteens who are terrified to try new foods. Parents worry that their teenagers, already prone to risk-taking behaviors, might be tempted to ditch their auto-injectors (EpiPens) when they head out with friends.

Younger kids can get bullied. High schoolers may struggle with intimacy if, before kissing their boyfriend or girlfriend, they have to ask what they ate that morning.

But children with food allergies can also exhibit remarkable maturity for their age, especially if they’ve ever been rushed to a hospital after they started choking and wheezing, or have blown up with hives after eating something they shouldn’t have.

Or—in the case of Arlington sisters Josephine and Olivia Van Hoey—have had teachers who don’t understand how life-threatening their allergies are.

Josephine, 12, is allergic to dairy, eggs, peanuts, tree nuts and sesame. When she was in fifth grade, she remembers her homeroom teacher put up a sign saying that no food was allowed in class. Yet the teacher herself would eat yogurt or oatmeal in the classroom. “We kept having to explain to her that this was a very big deal,” Josephine says.

One day, another teacher took out a doughnut and started eating it in class. Josephine politely explained the no-food-in-the-classroom policy, but “she didn’t really get it. She said she had a napkin, but she had been walking around getting crumbs in the classroom and touching the paper she handed to us. It was really scary.”
Olivia, 14, is allergic to eggs, cow’s milk, tree nuts and shrimp. Several of her science teachers have included food-related lab experiments in the curriculum, she says, and she’s had to ask them to warn her ahead of time.

Recently, though, one teacher forgot. As soon as Olivia entered the classroom—where an experiment with eggs had just concluded—she started coughing and wheezing. “I was a little panicked,” she says. “I only developed my allergies a few years ago, so it’s a bit of a new experience to have to talk to a teacher about that. It felt like she was being a little insensitive.”

The girls’ mom, Nicole Van Hoey, says she taught her daughters from an early age to speak up when adults put them at risk for an allergic reaction. She is heartened by their friends’ efforts to include her kids in things—like the one who asked whether she could bring a “safe meal” to Josephine’s orchestra practice so they could eat together. And the time classmates petitioned their teacher to allow once-a-month breakfasts with “safe foods” so Josephine could participate.

Parents say the kids understand when their friend can’t eat certain foods; it’s the adults who often have trouble with the restrictions.