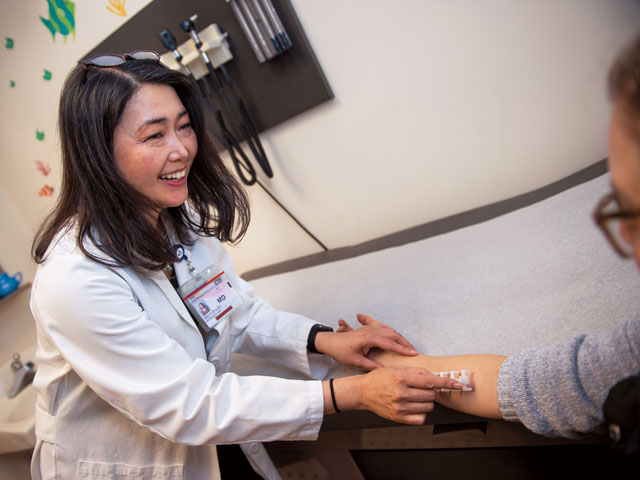 According to the Centers for Disease Control and Prevention (CDC), the number of children with food allergies increased by 50% between 1997 and 2011.

“No one knows for certain the cause of food allergy, but we do know that a child having one or more parents with any form of allergy—whether it’s to pollen or pet dander—can increase the child’s risk of developing an allergy to food or inhalant allergens by as much as 80%,” says Sally Joo Bailey, an assistant professor at the Georgetown University School of Medicine, whose practice, Allergy Associates of Northern Virginia, is located at Virginia Hospital Center in Arlington.

Food allergies also tend to be more common in kids who have other allergies such as eczema—a red, itchy, dry rash that persists.

Researchers have recently started looking at the microbiome—the genetic material of the bacteria, fungi, protozoa and viruses that live inside the human gastrointestinal tract—for clues.

“One more novel hypothesis that’s gaining interest is epigenetics,” Bailey says. “The concept that your gut microbiome and the foods you eat can determine which genes are transcribed and activated, thus determining if you’re allergic or tolerant of a food.”

Allergies are most commonly identified via a skin test (also called a scratch test) in which tiny samples of proteins from, say, pollen or certain foods, are introduced to the skin via pinpricks to see if they cause a reaction. Blood tests may also be used for diagnosis.

After an allergy is confirmed, Bailey works with patients and their families to develop a “food allergy action plan,” which states which foods to avoid, when to administer epinephrine or antihistamine, and the recommended dosage of medicine if the child is exposed to an allergen and has a reaction.

“All patients should call 911 after using epinephrine,” Bailey advises. “Due to a 30% risk of a biphasic reaction—a second wave of severe anaphylactic reaction that can occur after the initial reaction—patients should be monitored for four to six hours in the emergency room afterward and should carry two epinephrine devices at all times.”

But an emergency plan generally doesn’t cover the tricky and potentially perilous social situations that can lead to an emergency—such as grandparents who don’t believe in food allergies. Or what young kids should do if they’re at the house of a new friend and that friend’s mom or dad serves a meal they can’t eat. Or how to navigate a classmate’s birthday party if they need to inspect the package that the sheet cake came in to check the ingredients.

Children are taught to be polite to adults; children with allergies have to be taught to advocate, sometimes forcefully, for themselves, says Jennifer Pedicano, an allergist and immunologist with offices in Falls Church.

Complicating the issue is societal confusion about what, exactly, constitutes an allergy and what is just physical intolerance.

Some adults who say they avoid gluten may do so for dietary reasons rather than because they’re truly allergic. Lactose-intolerant people may experience intestinal distress after eating milk products, but they generally aren’t at risk for anaphylaxis, which can be fatal.

“I’m very straightforward with patients and their parents. A food allergy is a life-threatening diagnosis,” Pedicano says. “If your relative doesn’t agree, you have to put your foot down and say your child won’t eat there. Food allergies need to be taken seriously.”