In Avis Collins Robinson’s work, and life, there are common threads. 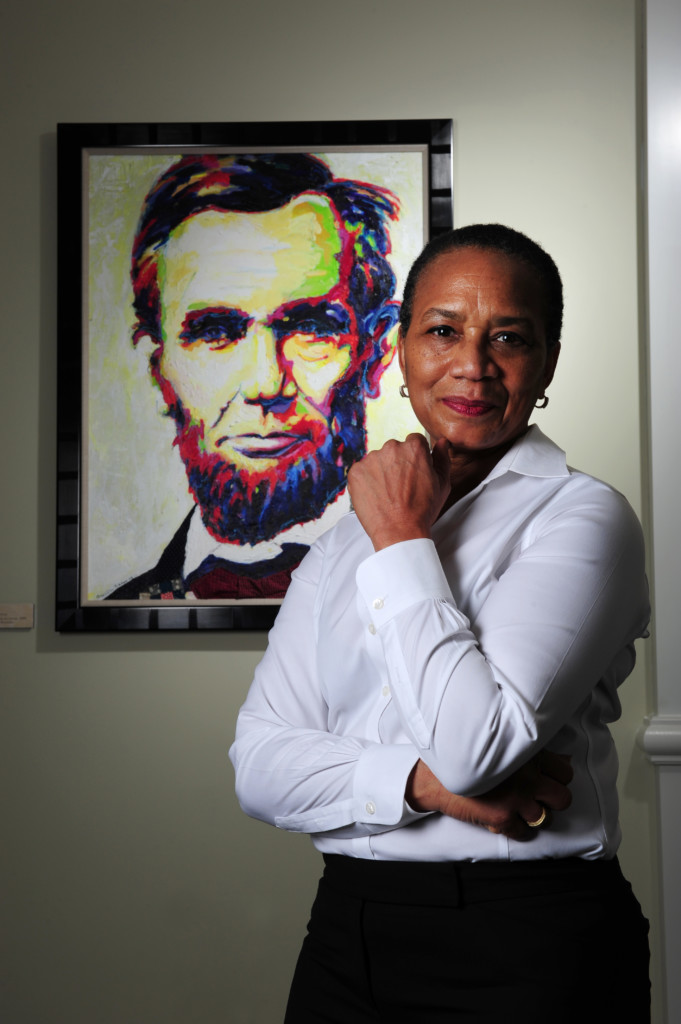 Her mother always called her “the family historian.” It’s a title that Avis Collins Robinson embraced and expanded.

As a child, she listened to family stories and drew pictures. As an adult, she began collecting artifacts from U.S. slave history and the struggle for civil rights. Then, as an artist, she began reinterpreting those objects and themes in a palette of purple, green and raw umber, and with needle and thread.

Robinson calls it “remembering”—something her mother, a painter and a cancer researcher, asked for on her deathbed five years ago. That plea has since become a mission. “Please Remember Me” is the title Robinson has assigned to her collection of nearly 3,000 artifacts, which includes slave traders’ journals, dolls that were handed to children after they were freed, and portraits she has painted herself.

“These are real people, from real families,” she explains.

Some of Robinson’s ancestors were slaves, but not all of them. Her heritage is a blend of Black, white and Nottoway Indian. She dislikes being labeled.

“That’s the problem with D.C.,” says the artist, going off-the-record whenever she feels the need to swear. “Everybody tries to put you in a box. But I don’t go in a box. I love that.”

Instead, Robinson reads much like her patchwork quilts—the vibrant ones made with fabrics she has dyed on the kitchen stove in her Tara-Leeway Heights home. At 59, she seems to study or do a bit of everything: history, economics, law, climate change, quilting, philanthropy, writing, painting, videography. “And she does them all with the same sort of passion and out of a commitment and a highly original sensibility that is all Avis,” says Washington Post opinion columnist Eugene Robinson, her husband of 34 years.

Avis Collins Robinson grew up in Montgomery County, Md., majored in economics and urban studies at the University of Maryland, and went on to earn master’s degrees in economics and finance from Golden Gate University and Harvard. She moved to Arlington in 1979 (when Gene got his first job at the Post) and began her own successful career at the U.S. Environmental Protection Agency, where she was appointed deputy director of the Office of Atmospheric Programs. But when Gene’s writing turned to politics eight years ago, Avis moved out of government and focused on philanthropy, dedicating herself to the Washington Metropolitan Scholars Program she had started, with a goal of helping more African American students reach elite colleges and universities.

Creativity, however, has always brought added dimensions to Robinson’s life. She painted in high school and took up quilting in her 20s, working for a time with Alabama’s Gee’s Bend Quilters, a generations-old collective of African American women whose bold, artistic quilts are world famous.

In 2009, her friend Preston Sampson, an artist based in Silver Spring, Md., began work on a series of Barack Obama portraits. Robinson offered her basement as a studio and helped Sampson get organized. She stretched canvases and sketched the president’s face. She added textiles to the portraits. She fed Sampson home-cooked meals and ideas and laughter.

“She has a bear trap of a mind,” Sampson says. “She saw how I was doing my work, where I was coming from, and it prompted her to start doing her own. One day I came back after a long day and there was another painting sitting there. I said, ‘I don’t remember doing this.’ She had done it.”

Now, he says, she’s found her own voice. “If I would recognize any influence I had on her, it was pretty much…putting the jumper cables on her willingness to take chances on her own work.”

Robinson’s pieces include portraits of family and laborers, of slaves and icons, and of Michelle and Barack Obama, whom she first met at a White House Christmas party. (“I never paint him brown,” she says, “only many colors.”) Her commissioned portrait of Abraham Lincoln, which integrates antique quilts and broadcloth with acrylic paint, hangs in the Ford’s Theatre lobby, as it has since February 2009, when the theater reopened for the bicentennial of Lincoln’s birth.

But most of her pieces are not on public display. Her artifacts, which date from the 1600s and were gleaned from auction houses, secondhand shops, and the attics and barns of family and friends, are housed in a secure storage facility in Maryland. The collection includes items ranging from KKK robes and Black Power buttons to slavery branding irons and spools of thread. It will likely end up in a museum one day,  but not yet. Robinson wants to keep much of the collection intact, and she feels she has more work to do when it comes to preserving and interpreting history.

Her studio is similarly filled with works in progress, each as tall as the artist herself (who stands 5 feet 2 inches, but holds herself taller). “This one is going to be a baptism,” she says, riffling through canvases the way others flip through snapshots. “This is Gene’s [boyhood home].This is me holding [our son] Aaron when he was a baby.” But nothing’s leaving the basement until it’s ready.

“I’m a perfectionist,” she explains. “If it ain’t right, you ain’t gonna see it until I’ve got it right.”

An introvert—she’ll be the first to call herself that—Robinson had shared her work and collection with few people before this past August, when Art Hauptman, owner of Cassatt’s Kiwi Café and Gallery, convinced her to stage an exhibit in her home.

Rising to the challenge, she went to work, placing a rare Eli Whitney cotton gin she owns—based on the inventor’s 1795 design and one of the very few still in existence—next to “Slaves in a Field of Cotton,” a painting she based on a glass negative. The slave owner stands in the background, his face unfinished. “He’s nobody,” she says. A young slave resembling Avis as a child stands in the foreground, clutching a snowball of cotton.

During that same exhibit, Robinson’s Pieta portrait—a slave mother holding her dead son the way Mary is often depicted holding Jesus—was on display in the dining room. Close by were actual slave shackles, a belled collar that once choked the necks of runaway slaves, and a receipt paid for a woman and her child. In the yard, Robinson hung her quilts—themselves portraits—near a racist billboard about the NAACP, finding art and commentary in the juxtaposition.

Chelsea Gilmour, who attended the exhibit with her artist mother, walked silently among the relics and the paintings. When she saw the Pieta, tears flowed.

“Avis came over and gave me a hug,” recalls Gilmour, 23, who grew up in Arlington. “She talked me through it. It was very emotional.”

A survivor of Hodgkin’s lymphoma, Robinson moves and talks fast, like someone who’s learned the value of time and has no intention of wasting it. There’s still so much to say.

“I love history and I love my culture,” she says. “To me, history is physical. It’s all history, the beauty and the ugliness. It is ‘Please Remember Me.’  ”

Madelyn Rosenberg is a writer and storyteller in Arlington. Canary in the Coal Mine, her first middle-grade novel, will be released in April.