Climb aboard to see fall foliage, bald eagles and a stretch of the Potomac River Valley that George Washington knew well. 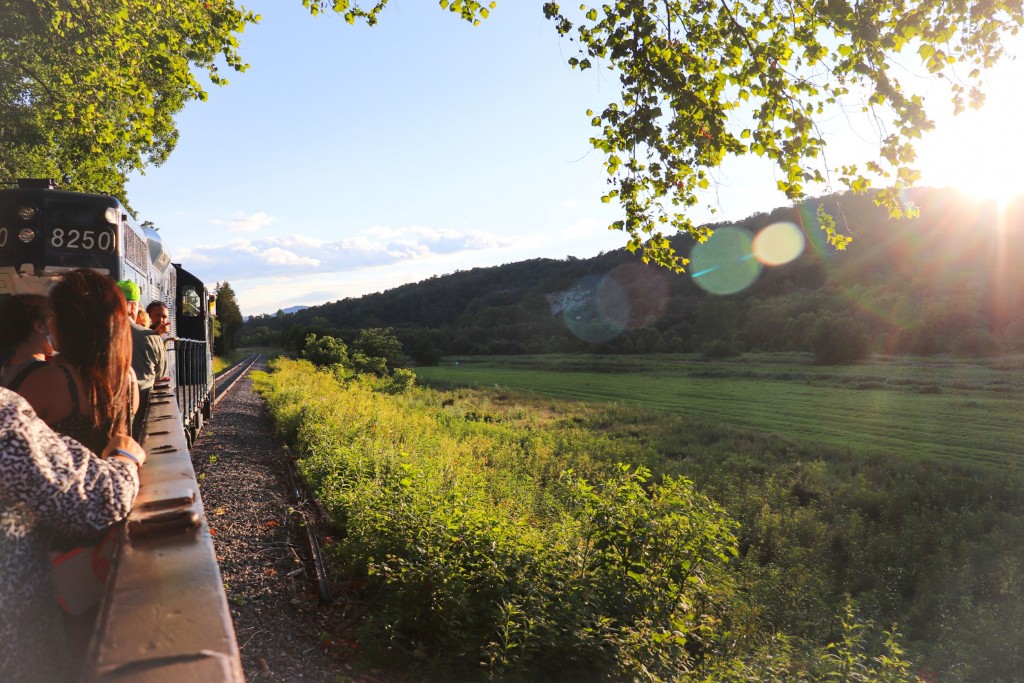 The “gondola,” an open-air car on the Potomac Eagle Scenic Railroad (courtesy photo)

“Two eagles sitting in a tree!” exclaims Jean Shoemaker, our 80-year-old spotter. “Look for the dead tree in the river, then go straight up the mountain and you’ll see them.”

Everyone aboard the train swings to the windows to peer at a pair of bald eagles casually yet majestically looking out over the South Branch of the Potomac River.

My wife, Rebecca, and I have driven out to Romney, West Virginia, to board the Potomac Eagle Scenic Railroad, which offers a variety of rides on a former B&O railroad line every weekend starting in May and continuing through December. (During the holiday season, a family-friendly North Pole Express ride includes storytelling, Christmas carols and a visit from Santa.) Our journey, the three-hour Trough Trip, is Potomac Eagle’s bread-and-butter ride, featuring West Virginia history and panoramic views. The “trough” refers to the most captivating part of the trip through a deep mountain river valley, where bald eagles are known to build nests and fish in the Potomac. Though the bird sightings aren’t guaranteed, we’ve lucked out with multiple eagle appearances.

What Potomac Eagle does guarantee (and deliver) is great service and a pleasant excursion. Engineer Patton Swartzfager, who is appropriately focused on running the train, notes that he takes great care to manage the “slack”—the few inches of play between cars—in order to give customers a smooth ride. In his past work for the Union Pacific Railroad, Swartzfager (his last name is a German variation of “blackbird”) ran five locomotives pulling 18,000 tons of freight in as many as 130 rail cars, and he clearly knows how to maneuver the Potomac Eagle. This was the smoothest ride I’ve experienced on a train, with not a single jerk or lurch during the three-hour tour.

There’s not much slack in the schedule, either. After boarding by pre-assigned train car at 12:45 (there are 270 passengers on our tour, though the train can carry more than 500), we are rolling south along the river at 1 p.m. Shoemaker, who has been narrating train tours since Potomac Eagle’s inception in the early ’90s, does double duty as eagle spotter and historian, imparting fun facts about the scenery and buildings we pass.

Chock-full of early American history, this stretch of the Potomac River Valley (the South Branch) was familiar territory for George Washington. He first came through as a teenager, surveying land on behalf of his mentor, Lord Fairfax, a major landowner of the British Colonial era. Washington returned to the area in 1754 as a 22-year-old lieutenant colonel of the Virginia Regiment, Shoemaker announces as the train wends its way past small towns and unspoiled terrain. A year later, the man who would become our first president passed through nearby Cumberland, Maryland, serving as a volunteer aide-de-camp to British General Edward Braddock en route to a drubbing by the French near Fort Duquesne in Pennsylvania. 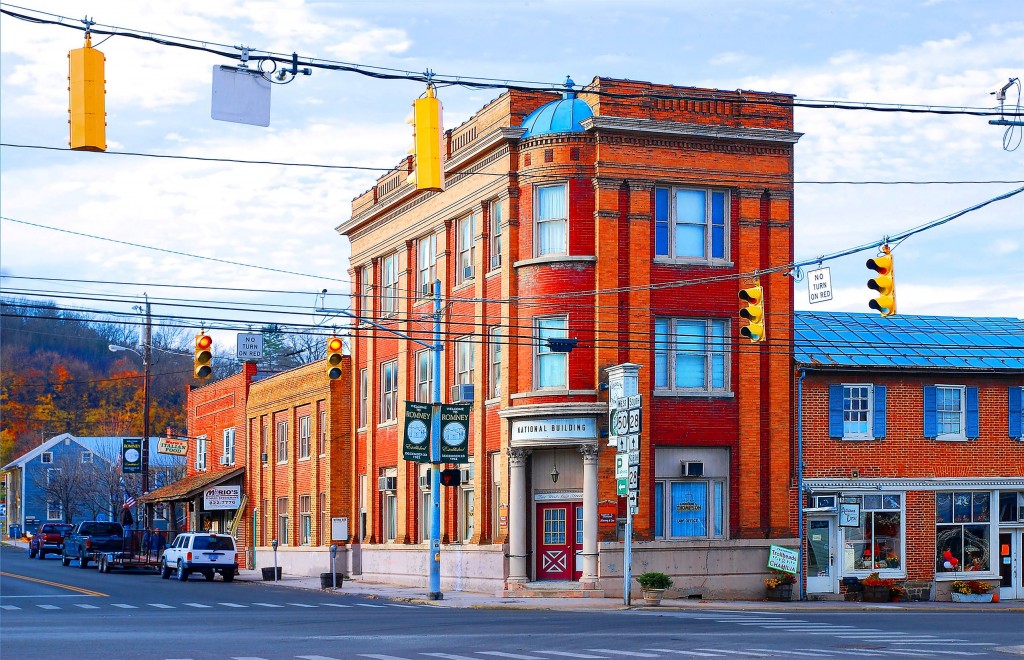 The town of Romney, West Virginia. Photo by Ron Cogswell.

Many decades later, Confederate and Union armies marched up and down the same riverbanks, angling for control of key railroads and commercial centers. Local lore has it that the town of Romney changed hands 56 times during the Civil War, Shoemaker says, including—in what must have been a particularly eventful 24 hours for the weary townspeople—three times in one day. (Other historic accounts, which equate military control with at least one overnight stay by the occupying force, estimate the number of turnovers at “no fewer than 10.”)

The Potomac Eagle offers four classes of service, from basic coach ($60 per adult) up to a four-course Superior Dining experience in a restored Art Deco dining car ($125). We went with the Premium Dining package ($100), which included a three-course meal attended to by friendly servers. But honestly, you could reserve the less expensive padded coach seats, bring your own bites or buy from the snack bar, and have an equally fine time. Our meal featured choices of mahi-mahi, chicken, roast beef, pasta or a vegetarian dish for the main course. Bread, salad, dessert and constant drink refills are included, but alcohol is not. Booze and smoking are not permitted on board the train. 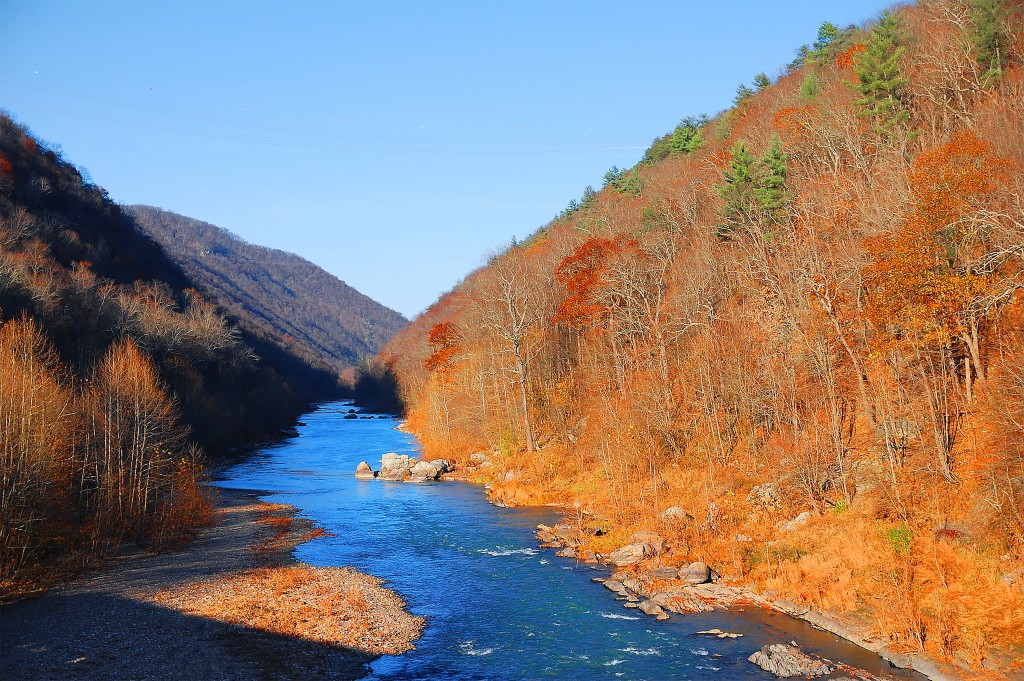 The “Trough” south of Romney, West Virginia, where bald eagles are inclined to nest. Photo by Ron Cogswell.

As we enter the Trough, Shoemaker’s commentary shifts to flora and fauna. Poking her head out the window, walkie-talkie in hand, with radio equipment positioned in front of her like a mini-command center, she begins calling out eagles with help from other staff stationed along the length of the train. In addition to the aforementioned pair of raptors perched in a tree, we spy a single eagle in flight, gliding over the river in tandem with the train and likely using its extraordinarily keen vision to scan for fish.

People are still talking about the eagles when our section takes its turn in the “gondola,” an open-air car where passengers can sit or stand, enjoying the views and fresh air. We find ourselves standing next to Keith from Hagerstown, Maryland, who is jokingly suggesting to his wife that all those eagles must have been decoys. 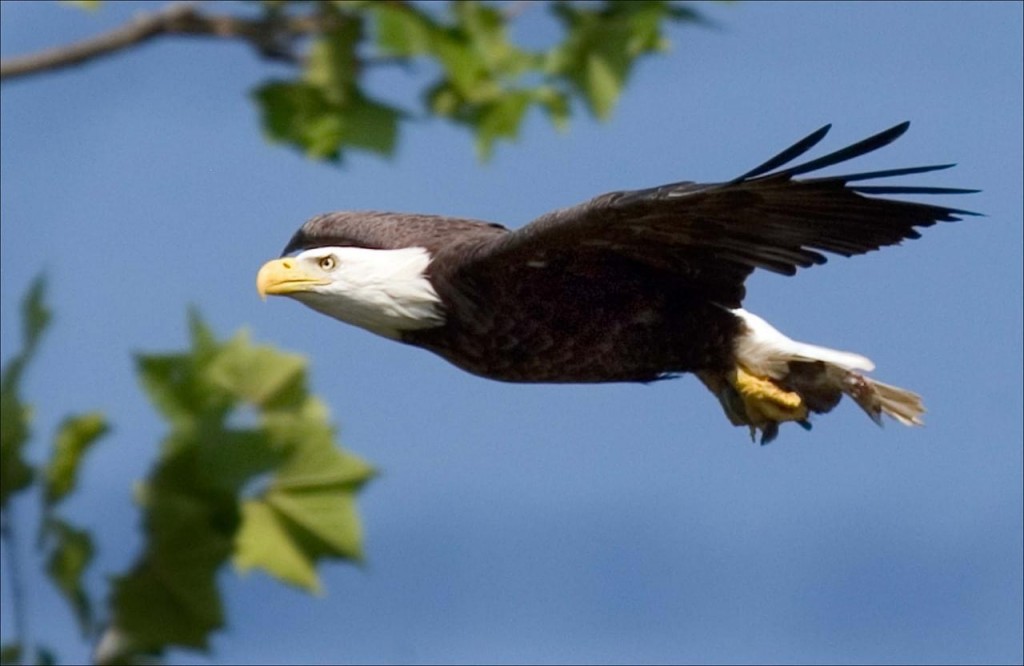 “What about the flying one?” my wife interjects.

“Hidden cables,” he says, not missing a beat.

The birds keep coming. On the way back to Romney, we are treated to a pair of eagles soaring high over the river that not even Keith can deny. We also spot two great white egrets standing on a sandbank in their snowy white splendor.

Exiting the Trough, we return to our dining car, where there is carrot cake waiting. We are just finishing off the last crumbs as the train pulls back into the Romney station and then, ever so slowly, comes to a gentle stop. 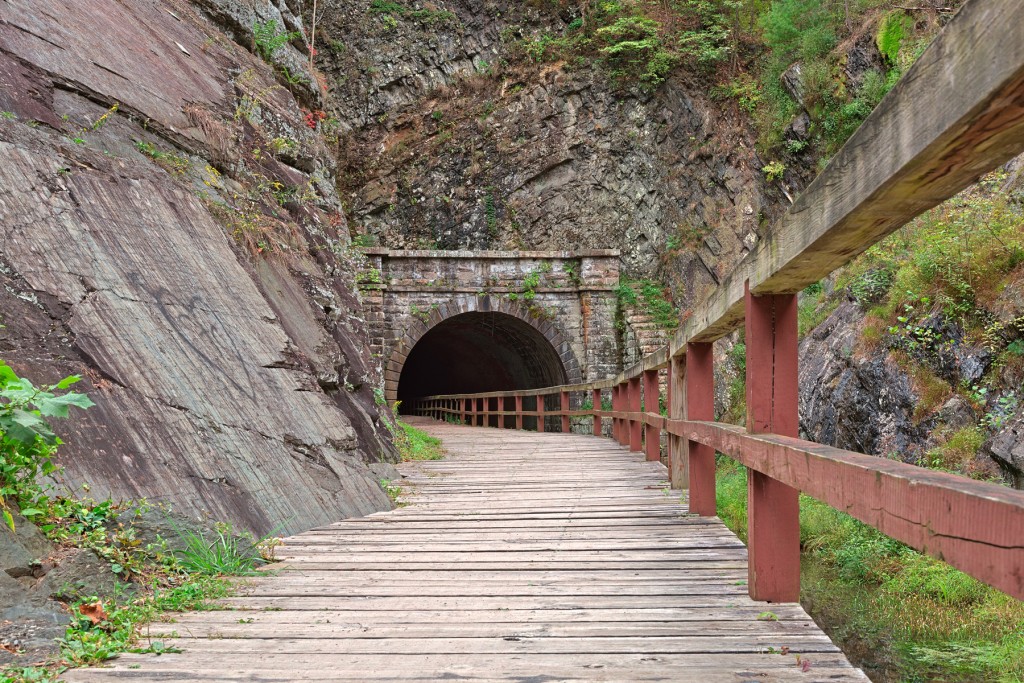 Romney is about 2.5 hours from Arlington by car. Train rides are available most weekends, starting in late May, and run daily during peak fall season in October and early November. Prices vary, depending on the length of the trip and class of service. Before or after the train ride, visit Cumberland, Maryland, and the terminus of the 184.5-mile-long C&O Canal Trail, for more George Washington history. The nearby, 3,118-foot-long Paw Paw Tunnel, blasted through a mountain in the 1840s by the C&O Canal Co. to bypass five Potomac River horseshoe bends, is also well worth a visit, including a spooky walk through the tunnel itself. // Potomac Eagle Scenic Railroad, 149 Eagle Drive, Romney, West Virginia, 304-424-0736

A resident of the Arlington Mill neighborhood since 2001, Jeffrey Yeates enjoys cycling and exploring Virginia history and roadside farm stands with his wife and daughter. jeffyeates@gmail.com